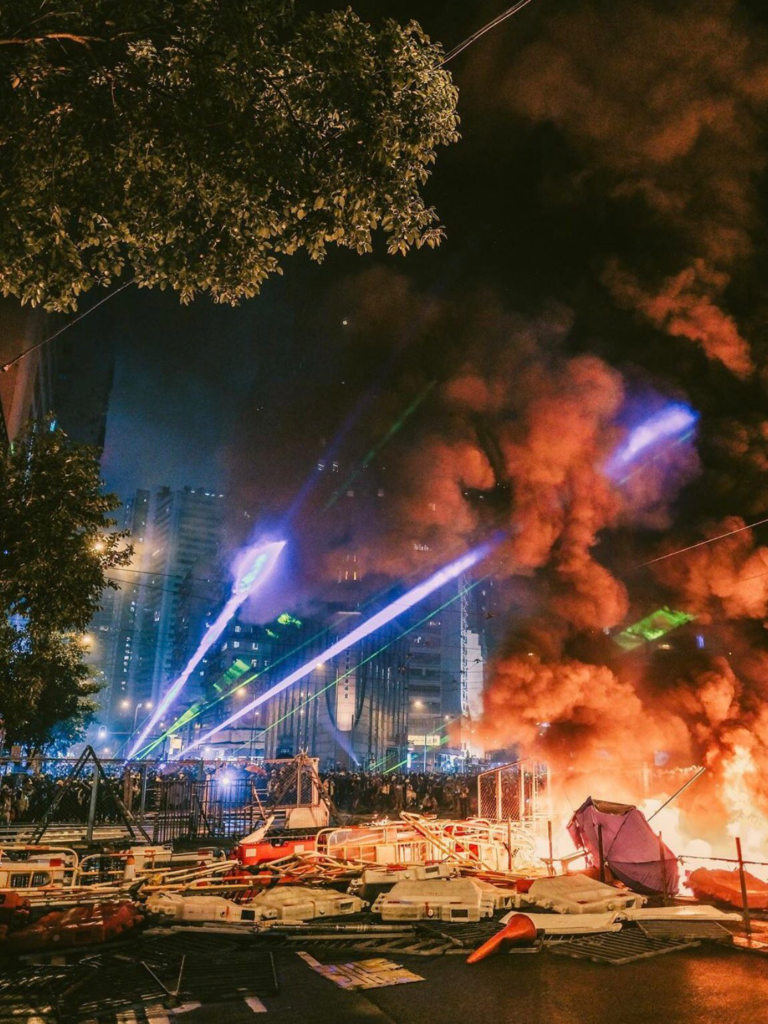 The use of new technologies is a common element in recent anti-government protests globally. Some commentators define these social movements as a ‘tech war’. The 2019 Hong Kong anti-government movement attracted worldwide attention. Activists remain committed to protests amid the COVID-19 pandemic: on 10 May 2020, more than 250 protesters were arrested on the evening after Mother’s Day in a major Hong Kong retail district. More than 650 people have been arrested in the most recent protests, following Beijing’s plan to bypass Hong Kong’s legislature by introducing sweeping national security laws for the city, along with a proposed bill to criminalise insulting or misusing the Chinese anthem.

This article tells the story of laser pointers and online mapping in the Hong Kong movement: it is the limitations and restrictions of these new technologies, not the innovative characteristics of the devices themselves, that have shaped the tactics of protesters and police. The article is partly based on accounts from anonymous individuals.

Carrying laser pointers is legal in Hong Kong. Police responded with flashlights and reflective shields. A student, arrested on the street in August for possessing ten laser pointers, was later released unconditionally. The increased risk of arrest prompted protesters to use the devices at high-value targets. This new tactic triggered a direct confrontation between protesters and the Chinese army. In October, when hundreds of protesters targeted China’s Hong Kong military base with laser lights, troops inside the barracks responded with spotlights and warning flags.

However, a controversial court ruling in the police’s favour (in November 2019) set a precedent to criminalise carrying laser devices in protests. A sixteen-year-old boy was initially charged with ‘possessing an instrument fit for unlawful purposes’ for bringing a laser pen, a modified umbrella and a hiking pole to a protest, but the judge found the boy guilty of ‘possessing offensive weapons with intent’. According to the judge, a laser pointer is not, by its nature, a weapon, but the boy intended to use it to cause harm to others.

Laser lights all but disappeared from Hong Kong streets after the court decision. Protesters saw that they had to stop using laser lights in their protests, as the risk of carrying these devices seemed to outweigh their tactical benefits. This is because, once arrested, protesters would risk being subject to additional charges from the police in relation to carrying laser pointers. Meanwhile, the police took full advantage of the new situation. In a clash with protesters at a large private housing estate in early February 2020, police used flashlights freely to deter protesters in the absence of laser lights. Here, it was the court ruling, not the innovative features of laser devices, that precipitated the tactical shift on both sides. Coincidentally, the disappearance of laser-light use in the Hong Kong protest movement was almost simultaneous with the laser-prompted downing of a police drone in Santiago, Chile—further (and ironic) demonstration of the tech gadget’s usefulness for today’s grassroots social movements.

HKmap.live is a real-time crowdsourced online map (available on the website and Android app). This locally designed and volunteer-operated system was developed for protesters to avoid police brutality through timely updates, primarily on police and protester locations. Anyone can log in via a verification procedure from messaging app Telegram and report a time-stamped update. This update is then published on a real-time map of Hong Kong with a marker denoting its exact location and the type of incident or emergency (e.g., !! for danger), along with a text bubble for viewers to browse interactively.

The map’s iOS app was, at one point, available from Apple’s digital distribution platform—App Store. However, App Store removed it in October 2019. The reason given by App Store was that the map was being used to target individual police officers in violation of Hong Kong law. Apple’s decision has been criticised as an abject submission to China’s state power. The tech giant’s move certainly limited HKmap.live’s connection with Apple customers and tainted the map’s image as a symbol representing protesters’ defiance against authority. While Android’s app of the map can still be downloaded from Google Play, many end-users simply access the map via the internet from their mobile devices.

Real-time maps need an effective internet connection to function, however. End users have experienced difficulties in accessing the map from mobile devices in crowded spaces with slow data-loading speeds. HKmap.live’s anonymous developer told the Canada-based Chinese-language Ming Pao Daily News (Toronto) that the map’s software—developed from free open-source material—also faces challenges when identifying malicious users. HKmap.live has only a small fact-checking team, operated solely by volunteers. The site’s resource weakness limits its competence to verify updates amid huge rallies. Some users have also accused the police of sending fake alerts to the map.

Another protester-aligned group, 103.hk, uses human power to publish static web maps on protester and police movements, aiming for accuracy and the capability to deliver updates every fifteen minutes. This appears to complement HKmap.live’s automated system and galvanises an unintended high-low tech partnership. Users demonstrate how they solve problems through improvisation, adhering to the protest movement’s ‘be water’ principle. 103.hk works in several ways:

Protester and police adaptations to these mapping services may not be what their creators expected. Users who are aware of HKmap.live’s weaknesses in a rapidly changing situation turn to its text bubbles, published before marches begin, using them tactically. These text bubbles provide intelligence about road and Metro (train) entrance closures and possible escape routes from the expected locations of protest marches. Police recently conducted stop-and-search operations in locations near an expected demonstration. This new police tactic works to intimidate protest participants, but it may hamper HKmap.live and 103.hk’s efforts to obtain accurate information. In other words, the tactic-driven approaches of using (protesters) or battling (police) these online maps can be developed into something that reaches beyond the imagination of their creators.

While these low-cost online mapping services continue to shape protester and police tactics, their common features have inspired protesters worldwide, setting a new benchmark for protester tactics. Some Middle East protesters have taken lessons from HKmap.live, acknowledging some vital lessons:

To date, both HKmap.live and 103.hk are still operating against a backdrop of protesters roaring back to Hong Kong’s streets, railing against laws implemented unilaterally by the Beijing authorities. HKmap.live currently publishes updates daily. 103.hk posted its latest static map showing police deployment in its Telegram channel on 24 May 2020. The group also declared that it was training more skilled mappers—an apparently tactical move to offset difficulties in frontline information gathering caused by police stop-and-search tactics.

Whether these mapping services ultimately prove effective, or whether they can withstand the efforts of authorities to shut them down, are open questions. Police will likely continue to exploit protesters’ technological limitations, using these to suppress anti-government movements, along with other draconian measures. On the other hand, proficiency in using technology, along with the ability to improvise, will remain a key tactic in protestors’ fights against the police and their superior resources. Every technology has an unpredictable human face. This is perhaps one reason that there is no end in sight to the Hong Kong protests.

Victor Cheng is a visiting fellow at the Department of Political and Social Change of Australian National University. His research focuses on peace negotiations, the diffusion of military technology and military decision making in modern Chinese history. Victor can be reached at victor.cheng@anu.edu.au.

very detailed and in depth analysis. the author must have a lot of information sources which make him have a full understanding of what is going on in HK.

a very detailed and in depth analysis. the author must have a lot of information sources which make him have a full understanding about what’s going on in HK

Thanks for your comment, Jayson. Most of the source materials of my article are open-access materials. Many of them are available online, such as YouTube and various social media open channels, not to mention a flurry of journalist reports on the issue. All I need is a little bit of patient to read and watch them.

more articles should be posted on this issue. its important for the whole world to know more about HK. it will be a tragedy if HK becomes a CHINA city.

Very insightful and objective article. Thank you very much for the author’s effort to analyse the situation in Hing Kong!

at this moment, studies about CCP and it’s history is of vital importance as many countries are facing the invasion of CCP from all directions, and Australia is not exception.

Thank you! This is a very objective and comprehensive analysis which shares a lot of insight of the actual situation of Hong Kong!

Hi Peggy, thanks for your encouraging comment! The youth-led social movement in Hong Kong since mid-2019 has stunned the world with its ground breaking protest tactics. While they were creative, they were carried out with a sense of humor. It’s a great topic to study for western scholars, to say the least. The article is just part of my on-going research. More to come.

Thank you for such an explicit and thorough analysis. A collective amount of data is shared from fact-based sources. It is a reflective and insightful article, especially useful to those whom are not currently in HK to witness the real situation.

It’s great to read you comment, Rebecca. We’re lucky that media live broadcast on street protests in Hong Kong are still running via a variety of channels (including the Hong Kong police’s live recording), to date. HKmap.live is still in action at this moment. These journalists, cameramen and mappers, and HK citizens are the real heroes to bring the unfolding events in Hong Kong to the world. They deserve a big round of applause from all of us!

This is an example how judge made law in the common law system can respond and adapt quickly to the fast changing development, to hold laser pointer as an offensive weapon. Ironically it seems the common law system has made it a more sweeping effect than the civil law system in China, Japan and Europe on the ban (as their judges are not so bound by legal precedents).
I’m also curious how the author thinks toward LIHKG and TG as new techs shaping the backbone (as compared with the frontline discussed in this article) of the social movement and the strategies employed by both sides in using them. There may be clearly a purpose for the hk govt’s refrain from banning those social media platform due to strategical concern, even if they may seemingly already offend the national security law (judging from their content).

Thanks Jacob. You’ve raised excellent questions. I’m not a legal expert, but I think once a legal system is exclusively controlled by one party, it is likely to do harm, regardless of what system it is. The importance of LIHKG and TG in the movement has been widely reported. See Stanley Shanapinda’s article published in The Conversation, for example. My study on these two platforms will be included in my upcoming project. The future of LIHKG and TG is anybody’s guess, but I’ll be surprised if the HKG does not crackdown on LIHKG.