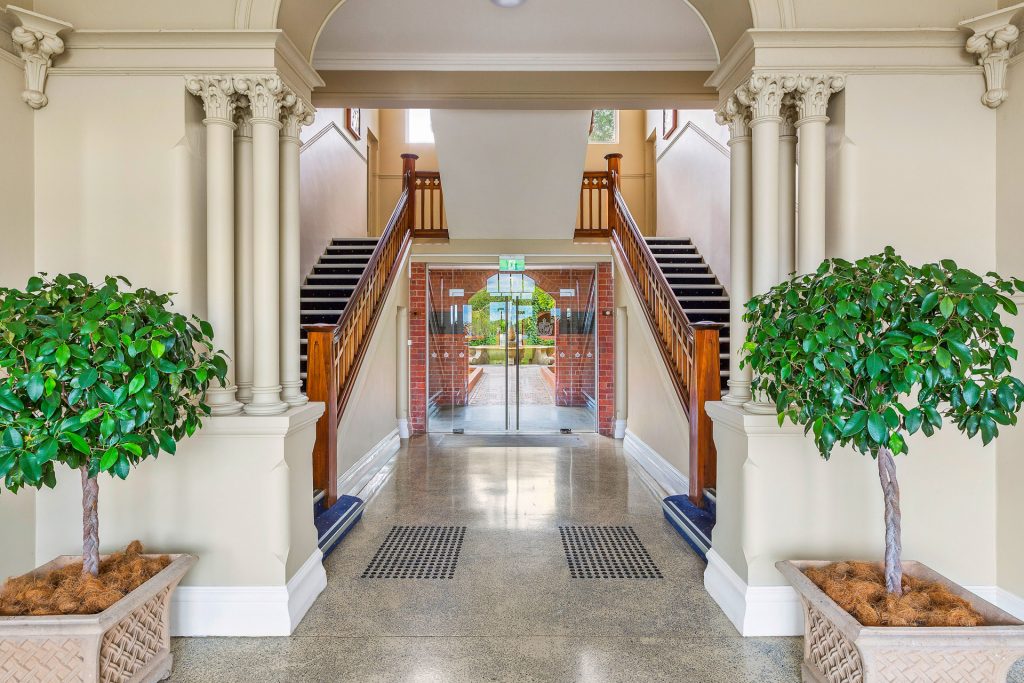 A photo of the interior of Geelong Grammar.

When I took up my first university post in Australia in 2016, colleagues told me that Australia tends to follow in England’s footsteps. I had an instant feeling of dread. Six years on, repeated moments of déjà vu validate my colleagues’ claims. I feel as though I have come from the future. Perhaps with the benefit of hindsight I can share some of my observations with Australia, because England is not a model most Australians would want to follow—not if they want an advanced education system fit for the twenty-first century, and one able to furnish a thriving, harmonious democracy.

To set the context, England remains a deeply class-ridden society with structures of education that reflect entrenched social class inequalities. The gap narrowed in the period from 1945 to 1979 but has since widened dramatically. One marker of the gap is spending on education. Data from the Institute for Fiscal Studies (IFS) show that in 2010, when the Conservative coalition government was formed, state schools received 40 per cent less funding per student than private schools. However, after twelve years of successive Conservative administrations the disparity has reached perverse proportions. In 2020 private-school funding was 92 per cent higher than funding for state schools, despite student numbers remaining relatively constant. In fact, the IFS notes that these figures disguise the true picture because they do not include donations, endowments and investment income received by private schools.

Similar disparities exist in Australia. The funding gap between public schools on the one hand and independent and Catholic schools on the other, which is already significant, is predicted to widen over the next seven years. Trevor Cobbold from Save our Schools analysed figures from the Australian Curriculum, Assessment and Reporting Authority (ACARA) to show that from 2009 to 2017 government funding of independent schools was nine times higher than that for public schools. In the period from 2009 to 2017 funding per student fell 0.5 per cent in the public sector but increased by 17.8 per cent in the Catholic sector and by 15.1 per cent in the independent sector. Furthermore, under the federal government’s current funding formula, until 2029 public schools will be consistently underfunded by $60 billion, whereas private schools will be overfunded by $6 billion. In addition to the basic funding formula, the federal government will allocate a further $1.2 billion to private schools from its ‘Choice and Affordability Fund’, a fund that is not available to public schools.

Behind these figures reside the human outcomes of inequality. Private schools in Britain provide the already privileged with a ready-stamped passport to more privilege, status and access to leadership. In Britain, two of the three most recent prime ministers, including the present one, came from a single private school: Eton College, which is just a stone’s throw from the monarch’s stately home of Windsor Castle. In Britain, geography and architecture are every bit as much signifiers of social class as wealth. I don’t see the same historic vestiges of social class in Australia, for obvious reasons, but a class divide certainly exists, and the funding gap between the public and ‘private’ sector, just as in England, is one marker of that divide.

The scale of the gap is evident in the capacities of different schools to resource educational provision, with a school on one side of the divide building a second theatre and a school on the other side wondering if it can afford to replace a worn carpet. According to data compiled by the ABC, between 2013 and 2017 the four richest private schools in Australia, serving just 13,000 students, spent more on school infrastructure than the poorest 1800 schools, serving 107,000 students, and half of $22 billion was spent on just 10% of schools in the same period—private ones, of course.

By and large, students who attend private schools, by virtue of the social class into which they are born, already enjoy material and economic privileges, and have experiential opportunities denied to children from low socio-economic backgrounds. They tend to have parents who know the intricacies of the educational landscape from kindergarten to university, and they have access to skills and knowledge networks that sustain them through childhood and beyond. They are ascribed a sense of individual right, entitlement and confidence. Conversely, children from low socio-economic backgrounds are highly unlikely to be given any of these attributes and, according to a paper by Claire Crawford and colleagues, experience inequity at every stage of their ‘student life-course’: they are less likely to go to university, and even if they do they are unlikely to go to the most prestigious institutions, get the highest grades or get the top jobs; and they are likely to have salaries below those of their more affluent counterparts. Social class is a badge carried through life: it opens doors for the minority, allows some a peek through the gap and ensures that opportunities remain firmly denied to the majority.

On ethical grounds, we might ask if it can ever be justified that an accident of birth, or a postcode, should determine a child’s educational provision, and beyond that, their life chances. But socially, economically and culturally, we should also question whether these disparities in educational provision are healthy for our national psyche and future collective prosperity.

In their ground-breaking work on social inequality, The Spirit Level: Why Equality Is Better for Everyone (2009), Richard Wilkinson and Kate Pickett draw on international evidence to support the claim that societies where the economic gap is narrow are educationally more successful, healthier and happier than deeply class-ridden societies where there is great economic disparity between the most and least affluent sections of the population.

In the short time that I have lived in Australia, my experiences of déjà vu and dread are becoming more frequent. Instead of following England down the path of growing inequality, which leads to deprivation, division and social disintegration, we must learn from the Old Country’s flaws. Australia is currently going the wrong way, and it is urgent that we go back, draw a new map and find a different route towards the future. That map needs to reveal the landmarks of funding equity in education, which must also include reparation for past and current inequities. It must show young people from less affluent and marginalised communities how to ascend contours of hope and success, instead of relegating them to a flat, featureless wilderness that they must wander, searching in the dust for the right tracks to follow.

Challenging class privilege takes courage because it induces the full force of the beneficiary class’s economic, social and cultural tools in response, but inequality is not a sustainable option for Australia. All Australians deserve better.

The paradox of teaching then is that teachers are attempting to create contexts for students to think for themselves, to stay sane in an age of division while operating within an institutional structure designed to create compliant and obedient workers, a goal that is continually reinforced by the state for neoliberal purposes.

Fabulous, thought-provoking article. However, it is not clear to me whether Paul Gardner is taking into account that money is also spent by the state governments on their schools? Do the figures about how much more money is paid to private schools than public schools take this into account? The fact that the federal government gives so much to Private schools is already in itself a terrible scandal. It would be a shame, and not necessary, to exaggerate the enormity of this injustice – if that is what is happening.

I don’t know anything about school funding in England; maybe it all comes from the central government? In which case this situation reaches the pinnacle of injustice.