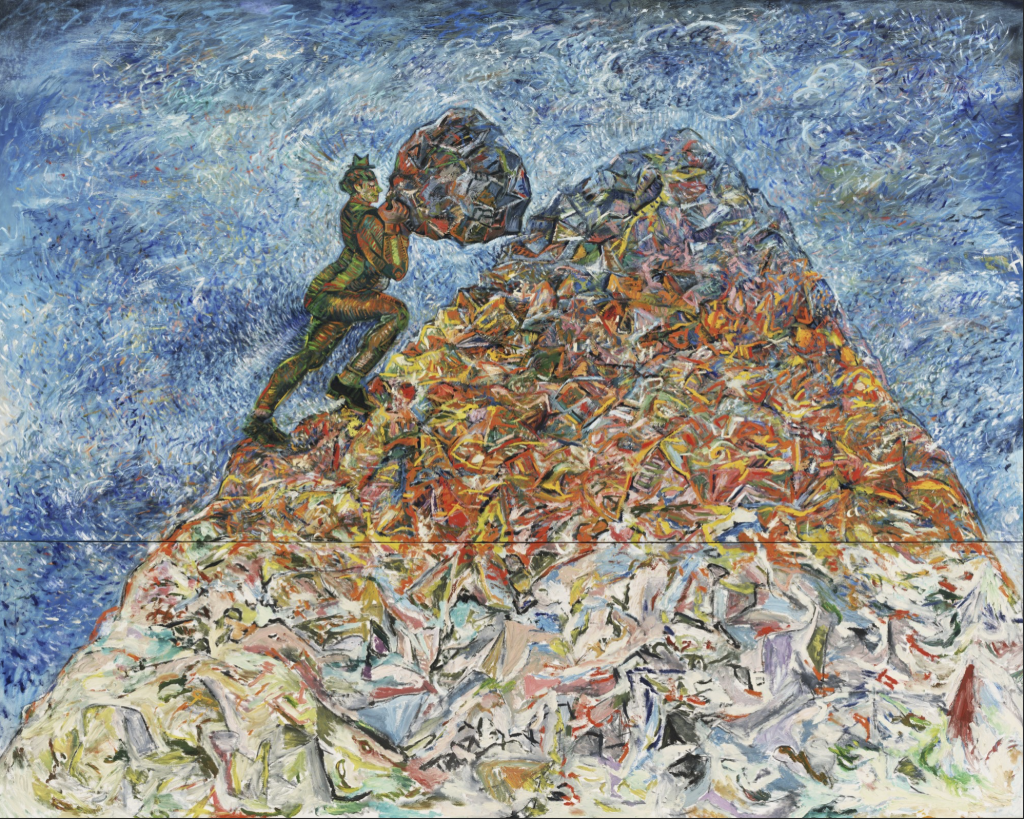 Sandro Chia
The Idleness of Sisyphus
1981

You might have heard that young people have a short attention span, especially when it comes to schoolwork, and especially when they’re at home and the schoolwork is online. You never hear the same said about TikTok and Instagram. That’s because, for many students, an online classroom is switched on in a literal sense only. One of the key reasons for this concerns the nature of online learning, which, paradoxically, reinforces tyrannies of distance (the lack of tactility) while at the same time bridging distance. And while teachers continue to work hard to upskill their technological proficiency and to design lessons that are as engaging as possible, there is under it all a sense of the Sisyphean.

The banking model of education, developed by the Prussian state and exported to the world in the latter half of the nineteenth century, continues to be the overarching ideological structure that shapes our school system, and the raft of digital platforms that make up online learning in Australian high schools have not achieved a dispension to opt out because,  as Aboriginal academic Tyson Yunkaporta writes, ‘[T]he creation of a workforce to serve the national economy is the openly stated goal of public education’.[1]Tyson Yunkaporta, Sand Talk: How Indigenous Thinking Can Save the World,  Melbourne: Text Publishing, 2019, pp 141–2. Thus, ‘forcing people to remain children… slowing the transition from childhood to adulthood [is] intended to create a permanent state of childlike compliance in adults…’. [2]Yunkaporta, p. 139.

The paradox of teaching then is that teachers are attempting to create contexts for students to think for themselves, ‘to stay sane in an age of division’[3]Elif Shafak, How to Stay Sane in an Age of Division, London: Profile Books, 2020. while operating within an institutional structure designed to create compliant and obedient workers, a goal that is continually reinforced by the state for neoliberal purposes.

However, as the great educationalist Paolo Freire says, ‘studying is above all thinking about experience, and thinking about experience is the best way to think accurately’. [4]In N. Couldry, Inside Culture, Thousand Oaks, California: Sage Publications, 2000, p. 8. In line with this, many teachers work from inside the institution of schooling to create inspiring programs and lessons that are imbued with respect for their students. Their aim is to encourage critical thinking and self-reflection through dialogue, and to assist their students as they embark on navigating the complexities and contradictions of the modern world with confidence.

All this can take place through online learning and all students can draw on their own experiences to live their lives as reflective and insightful critical thinkers.

But when push comes to shove, it is a big challenge to generate thoughtful online spaces relevant to the lived experience of students. And who exactly are those students? The embodiment of meaningful and sustained moments of learning through digital platforms depends on a teacher’s effective use of knowledge and affective content. Two areas can be identified. First, programming for online delivery extends the blended model of ‘twenty-first-century learning’ methodologies. For example, a five- week unit of work would involve the synthesis of multimedia texts, an interactive graphic novel, YouTube interviews with the author/artists, and chat-room discussion of multiple ways of reading and evaluating the central text, with students applying what they have learned to shape their own texts. In short, online learning needs soul. Otherwise, students will neither feel nor ‘think’ their learning because, as Bjork says, ‘If there is no soul in computer-music then itʼs because nobody put it there’. [5]Bjork, in T. Fawns, G. Aitken and D. Jones, ‘Online Learning as Embodied, Socially Meaningful Experience’,Postdigital Science and Education 1, New York: Springer Publishing, 2019, pp 293–97.

Through their ongoing (online) presence teachers can make connections with their students and through this offer a sense that there is a future the students can shape for themselves.

However, it is presumptuous to imagine that all teachers have the skills and cultural repertoire to achieve this. This is especially true given the instrumental focus of current teacher training and the box sets of professional development. It is also naive to assume that all students (and all schools for that matter) have access to hardware, software and connectivity. Class, colour, disability, community and location affect equity. Education access specialist Anne-Marie Canning has remarked: ‘We’ve got to be really careful that digital provision doesn’t compound the inequalities we already see in the educational system’.

In 2020, not long after COVID lockdowns began in the United Kingdom, the country’s former universities minister Chris Skidmore warned that there were students who ‘already struggle with feelings of belonging and are already more likely to drop out of university’. His words apply equally to high school students. He says, ‘We can’t afford for care-leavers, estranged pupils, and those from vulnerable and deprived backgrounds to miss out on their potential’.

Two of the groups who consistently encounter online school-based learning as difficult to navigate include deaf culture people and people with disabilities. How is it then that outside the schooling structure, both of these groups have found the internet a meaningful and activated democratic space to meet and connect? This contrast between school based and other communities of connection is a sobering demonstration that the banking model of schooling dominates and flattens both the teacher’s voice and students’ individuality, meaning that groups like the above are not actively or directly addressed.

A curriculum that already omits the diversity of gender and sexual identities in subject areas is likely to silence LGBTIQ+ representation in the online schooling context too. Yet, like deaf culture and people with disabilities, LGBTIQ+ teenagers have found communities of support online.  And members of the Stolen Generations who have been able to reconnect with family through the liberatory capacity of internet social platforms will doubtless find little benefit if online learning is shaped by hegemonic neoliberal and racialised forces rather than proactive teachers informing themselves about what makes a good society. For example, Aboriginal Australian histories, such as the events that took place during the Frontier Wars, need to be included in units of work. However, this is not just about online learning. Face-to-face curricula also neglect these matters and in this sense the online classroom is no different at all. It too has the potential to generate inclusion or to privilege totalising so-called traditional narratives around invasion and colonisation.

In my own experience while teaching English in three Distance Education locations in two states (New South Wales and Western Australia), students disenfranchised because of disadvantage could find a context in online schoolrooms in which their own lived experience was valued in a community of difference—a microcosm of the nation, you might say. In this sense, online schooling can work most effectively when it is grounded in, and draws on, the lived experience of the students themselves.

But the contrast between these initiatives outside the formal schooling sector and government attempts to shape the narratives about agency are stark. Take for instance the Australian federal government’s recently released online resource ‘The Good Society’. Playing into the short-attention-span response to high-school education, ‘The Good Society’ follows the banking model of education and makes no attempt to change society and make it good at all. Instead of addressing misogyny or any of the ways the abuse of women by men continues to be normalised in Australian society, the package can be summed up by the well-publicised (and since withdrawn) video of a young woman throwing her milkshake on a young man—apparently this is aimed at teaching respectful relationships and consent. When we as a society do not directly tackle abusive cultures and inequality with regard to women, women continue to suffer. In the same way, other discriminatory practices—against people of colour, First Nations people, Muslim Australians, people with disabilities, LGBTQI+ people, people seeking asylum and others—are shifted further from the public gaze. That’s because a key aspect of critical thinking is developing the ability to make links between different forms of discrimination; to avoid naming one form of discrimination is to avoid naming all.

Not long ago, School Strikes for Climate Change elicited a weighty response from government: Prime Minister Scott Morrison stated, ‘What we want is more learning in schools and less activism in schools’.

In line with the banking model, Morrison’s comments reinforce the idea that education should exist in a permanent state of pretermission, eliding all agency for positive cultural change. The assumption here is that either critical thinking should not be connected to how we live, or that critical thinking should not exist in the first place if the education system is to produce a compliant, ‘work-ready’ population. This is really education as Costa Concordia, a term I take from the 2012 shipping disaster in which thirty-two people died. The crew on board had done their emergency training—entirely online—but no-one knew what to do in a real-life crisis. If we are to apply this to online education, we can see that it is all the more important that online education is based on doing. I have found that students give the best responses when they reflect on their own experiences.

The government, through the creation of the National Curriculum, has listed critical thinking (like intercultural understanding and ethical understanding)as a ‘General Capability’, a thread to incorporate within subject content rather than a capacity to be positioned as the frame through which all curricula should be created.

It is possible that the online context may offer learning, but with limits on agency, just as schooling itself embodies the contest between education and authority. It may be that critical recognition of this is enough to disentangle students from simple acceptance of the business model of schooling and its limited values. But, in the age of COVID (and perhaps beyond), there are major issues that education needs to engage with. Can online learning address critical and systemic reckonings that require a tactile response? Such reckonings include massive environmental destruction, the ongoing dispossession of First Nations peoples, Black Lives Matter, and the pandemic itself. Does online learning through schools bring a reactive and therefore passive focus to these issues or is it able to offer a proactive context? Foremost we ought to consider: do we want a society that values atomistic and skills-capable people at the expense of connection and empathy across all forms of being human?

Reason, rationality, calculation and measurement need to be transformed by empathy, compassion, imagination, dialogue, creativity and importantly the questioning of authority and power.

John Ryan is an educator and freelance writer. He has taught English in secondary high schools in New South Wales and Western Australia, including in Distance Education. He specialises in education, social justice and cultural studies. His most recent publications, with Baden Offord, are ‘Landscapes of colonial Australian entanglement: authorities, self-definition and cultural pedagogy’, in The Handbook of Space, Place and Law (Elgar, 2021), and ‘Other Echoes in the Garden: Human Rights, Peripheral Vision and Ghosts’, in Activating Cultural and Social Change: Pedagogies of Human Rights (Routledge, 2021).