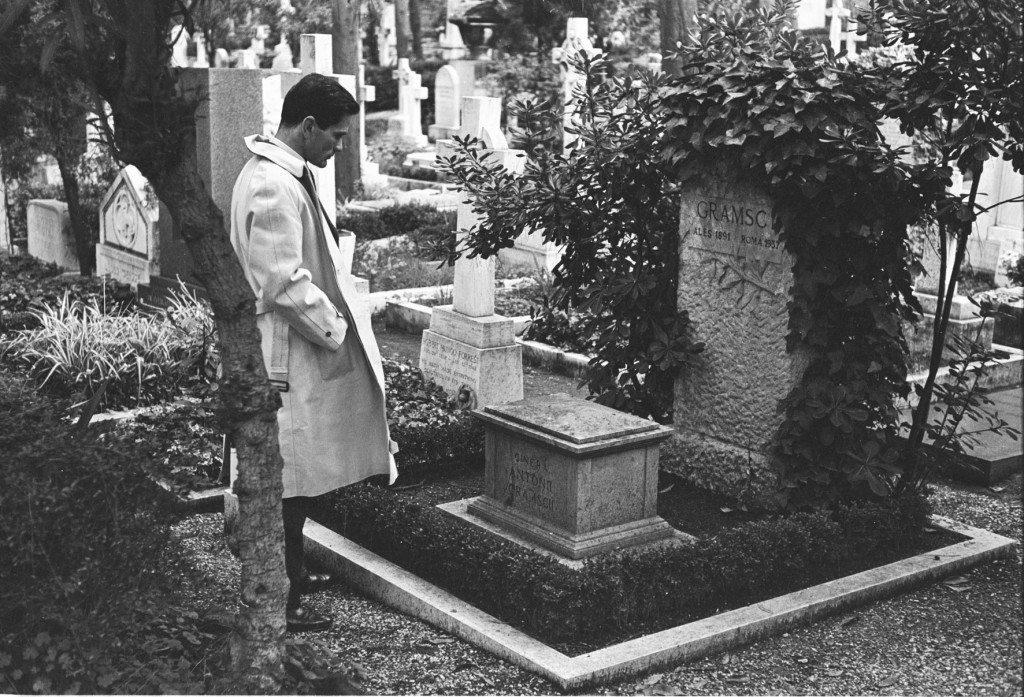 (The light of the future never ceases to wound us, even for an instant)

Those who have heard of Pier Paolo Pasolini in the English-speaking world are most likely to know of him as a director of controversial films. However, Pasolini, who was born in Bologna in 1922 and murdered on the outskirts of Rome in 1975, started his creative life as a writer of poetry and prose. His work often reflected a struggle to reconcile his contradictions: he was gay and yet he proclaimed his faithfulness to Catholic values, and for much of his life, he also adhered to Marxism. An enduring leitmotif of Pasolini’s art is his lament for the destruction of the traditional values enshrined in the proletarian and peasant Italy of his childhood by the tide of post-war capitalism and the consumerism brought in its wake, which he considered an ‘anthropological genocide’. Pasolini’s volume of collected poetry Le ceneri di Gramsci (Gramsci’s Ashes) was published in 1957. It reflects his experiences during the difficult early adult years of his life, when he lived a hand-to-mouth existence on the outskirts of Rome—a life almost as marginal as that of the poor proletarians who lived there, on the border, as it were, between the old village-centred peasant Italy and the new Italy represented by the encroaching city, its silent peripheries defined by indifferent concrete walls.

This collection contains a long poem entitled Il pianto della scavatrice (The Weeping Excavator), whose themes are somewhat reminiscent of T. S. Eliot’s The Wasteland. In Pasolini’s poem the excavator screeches a lament as it bulldozes away the old world. Though a symbol of relentless change, the excavator itself weeps over the mortal wounds that it is inflicting, as if aware of the suffering that this change will inevitably bring.

Concerned now with our destruction of the environment and global warming, we are finally becoming cognisant of the wounds that Pasolini so presciently decried before murder stilled his mind. Were he alive today, he would be seeking, as was his wont, to reconcile the contradictions of our collective soul.

This is my homage to him.

The other day I saw a silent bulldozer that had just torn down what I knew to have been a perfectly good and well-maintained house. With its inert blade turned downwards, the bulldozer appeared to be weeping over the destruction it had wrought.

I looked at the splintered beams and contorted metal sheeting that had once sheltered and kept warm an entire family. I began to wonder what this house had once represented. I was not only thinking of the human labour, the sacrifices and the capital needed to build it. For me the house also contained the human experiences accumulated over the course of its history, etched in the memories of its inhabitants and into the house’s every fibre. This house represented a ‘sacrifice’ in the word’s original meaning of ‘to make sacred’. It is the human investment in any object that makes it ‘sacred’.

Human labour is also part of nature because we belong to the natural world. When we destroy human artefacts we are also destroying, along with natural resources, the human effort invested in making them.

With dark foreboding, I began to meditate on whether this mechanism of destruction of material things made by people is also inevitably visited upon people themselves. I have seen many people cast aside the instant they have failed to keep up with some machine or anonymous process. Apparently, in today’s capitalist economy we must continue to destroy things and people in order to turn a profit by ‘rebuilding’ or replacement. It is but a slower version of what happens in war.

This process reduces anything with human or natural value to a simple monetary equation. Human labour, skills and culture, and natural resources are all subject to quantification and qualification in the form of money. Is this not in reality an extreme form of impoverishment, a reductio ad pecuniam that makes a mockery of everything that is human and worth living for? For if time is money, money is not time, nor is it true wealth.

Perhaps one of the reasons for this distortion of human society lies in the fact that European culture has historically practised a distinction between matter and spirit. We are taught that we can freely deal with the former without tainting the latter. We consider nature not as a system of sentient beings but as inert matter from which we can take as we please. We refuse to see ‘being’ in animals or in vegetation. We reduce both to the status of raw materials for our factories. Our slaughtering of food animals, for instance, bears none of the respect and consideration accorded to the animals in traditional societies in recognition of their imminent sacrifice. It is simply machine killing, akin to contemporary warfare. We treat nature, including the nature that abides in humans, as materials from which to draw our profit. Consequently, we all become interchangeable and disposable GIs: General Issue; mass-produced products of a system.

If instead we contest this separation between matter and spirit and begin to see the one as emanating from the other as part of an inseparable whole, then we realise that we are living in a charnel house. We begin to understand the Indigenous peoples who have always been acutely aware that to destroy nature and human effort is to destroy ourselves. By abandoning ‘sacrifice’—the ‘making sacred’ that derives from our respect for what we are, what we make and what we do—we reduce human effort to valueless dust.

Gerardo Papalia is a Research Affiliate at the School of Languages, Cultures and Linguistics at Monash University in Australia. His expertise is in history and Italian Diaspora studies, including literature, religion and cinematography.