Crimes Against Humanity on the Polish-Belarusian Border 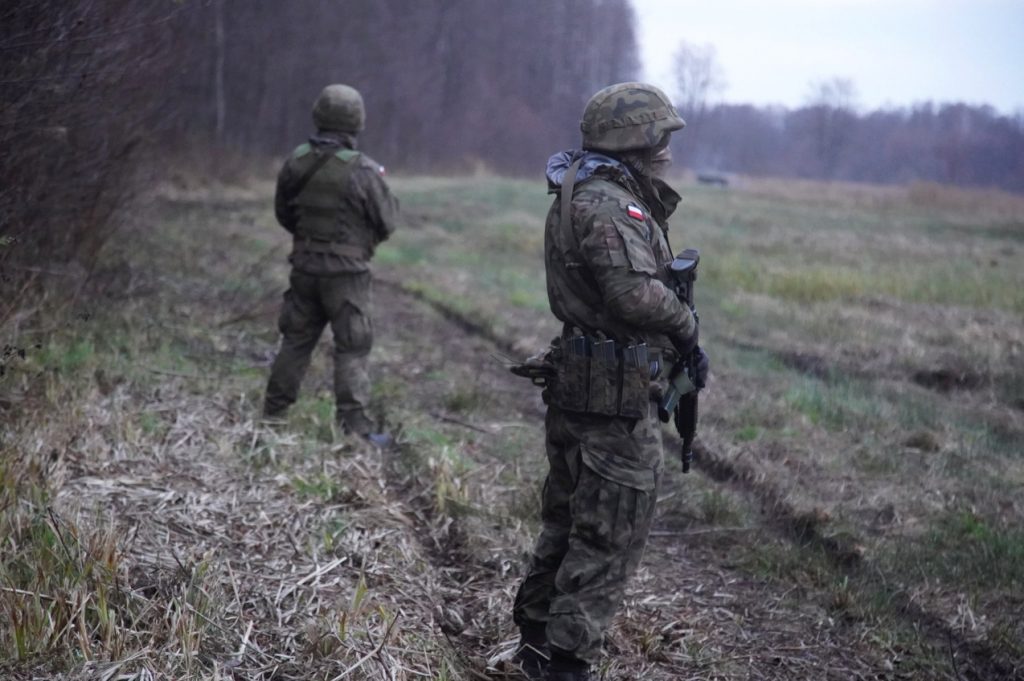 Polish soldiers patrol Poland/Belarus border in unknown location in Poland, in this photograph released by the Polish Defence Ministry, November 10, 2021. MON/Handout via REUTERS

In retaliation for European sanctions against his regime, the dictator of Belarus, Alexander Lukashenko, has decided to facilitate—or rather organise—access to the eastern border of the EU to people hoping to seek refuge in the EU. The regime cooperates with people smugglers around the world and one plane after another lands in Minsk every day (while Lukashenko’s regime makes a fortune). The planes bring people from a number of countries, mostly Afghanistan, Iraq, Syria and Yemen, but also Lebanon, DR Congo, Cameroon, Sri Lanka and Cuba. They’re promised an easy passage into the EU. However, rather than being transported to Germany or another EU country, they will end up robbed, beaten and forced to trek miles upon miles through forests and swamps, before being driven out of Poland at gunpoint. At present, it is estimated that there may be as many as 10,000 people stuck along the Belarusian border. A sense of the scale of this can be grasped from visiting one of the Facebook groups dedicated to helping refugees: they are full of missing-person posters and films sent by desperate relatives.

People have always crossed this green border, but usually not in such high numbers simultaneously. In response to this sudden influx from Belarus, Poland has drastically hardened its eastern border. As part of this hardening, Poland has passed a new law that goes against the Geneva Convention, the Polish constitution and a number of international laws: it effectively bans anyone who crosses the border in an unregulated way from applying for asylum in Poland. Furthermore, it limits the application right to people who have come directly from the country where their lives are at risk.

In practice, this means that the border guards can push anyone back to the border—even if they are travelling with a child—and they don’t have to take them to an official border crossing, just back into the forest. Poland has established a closed border zone, 3km wide and 418km long, that only the army and local inhabitants (and, to make it more absurd, priests and delivery drivers) can enter . Excluded from this zone are voluntary paramedics (those who want to save refugees, as state paramedics often refuse to do so), human rights organisations—including Fundacja Ocalenie and those united as Grupa Granica—and journalists. There have been a number of arrests already. The few local people who try to help by venturing into the forest with soup and dry clothes for the refugees are regularly threatened and intimidated by border guards and the police. People have even been stopped and questioned for having the ‘wrong’ looks (a stereotypically non-Slavic appearance).  The Red Cross has not attempted to enter the zone, despite its legal right to do so (there’s an ongoing campaign urging it to enter the zone).

Those who are lucky enough to make it through the forest and into Poland are often beaten by Polish border guards, denied access to medical aid, food or a lawyer, and then transported back into the forest in military lorries. Their phones are often destroyed by the guards, their clothes are taken away, and people are left with the very real possibility of death from starvation or hypothermia. Officially, there have been between seven and nine confirmed deaths (the discrepancy comes from the fact that the bodies of two refugees were found on the Belarusian side, but the people who died had been in Poland earlier and had asked for international protection there before being pushed out and dying on the other side of the border).

Informally, there are reports of entire groups of dead people in the forest, and of Polish soldiers throwing the bodies of children and adults over the border into Belarus, where they are buried by Belarusian guards (who have also been accused of shooting those too weak to attempt crossing back again). These informal reports are eyewitness accounts by refugees who came out of the forest and spoke to volunteers on the ground. These reports cannot be verified yet, but such stories are coming from multiple firsthand accounts. We have seen a number of films made by refugees of people unconscious or even dying from hunger, hypothermia or illness, with their family members begging for help, often within sight of Polish border guards. These people are trapped in limbo and slowly dying.

Foreign journalists outside the closed zone recently witnessed a group of Somali refugees being taken away in a lorry despite clearly asking for asylum in front of activists, lawyers and journalists; two Congolese teenagers were taken away by the guards despite having a legal guardian appointed by a Polish court in an emergency hearing. Hospital staff who work to save refugees in hospitals in eastern Poland are left traumatised when they see their patients being taken by the border force. Families are separated in the process including a woman whose children have gone missing and a little boy whose mother was most probably pushed out (the government children’s rights ombudsman suggested, incredibly, that that’s what should be done—accept children push their parents back into the forest).

We have no idea how the border guards decide who is saved and who is pushed out, although black refugees are the least likely to be given a chance to apply for protection; and likewise, across all ethnic groups, young men are less likely to be accepted—no matter how ill they are. There are some limited cases where the authorities allow people to apply for asylum, likely as part of a government desire for some positive stories in the media to pretend that none of the horrors that the people on the ground describe have ever happened.

The official narrative is that people who ask for asylum are given it, but this is obviously a lie, and the narrative falls to pieces in cases such as those of the children from Michałowo, where a large group of families with little children spent the entire day in the yard of a border force processing facility asking for international protection, only to be transported back to the forest. While the government claimed that they were ‘somewhere safe’, a border-force spokeswoman confirmed that they had been transported back to the border. We know that twelve people from the group survived (their families managed to help them get to Germany safely, as know from Yazidi rights campaigner Murad Ismael), but we have no idea what happened to the rest. The question ‘Where are the children from Michałowo?’ and ‘missing child’ posters bearing the image of one of the refugee children were used during recent protests in Polish cities.

We have witnessed many absolutely horrific cases, including a woman who gave birth in the forest. She survived thanks to assistance from volunteers, and was taken to hospital, only to be dragged out and forced to cross the newly built razor-wire fence that now demarcates the border. There have been people suffering deep hypothermia—who survived only because of long resuscitation work by voluntary paramedics and hospital staff—who have been dragged out of hospital by masked men without IDs and taken in an unknown direction in an unmarked vehicle. Border force also destroys all documents proving that these people were ever present in Poland.

These stories are drastic and sound like a Nazi horror film—but this is what is happening in an EU country right now. What’s more, the weather will soon make the forest impossibly cold: winter temperatures in that part of Poland can get as low as -30°C. Border guards have informally told local inhabitants that that is what they are waiting for. This has the potential to become genocidal. It is an atrocity being committed in broad daylight.[1]The two main grassroots groups working on this are Fundacja Ocalenie (Salvation Foundation) and Grupa Granica (Border Group). The latter has appealed to domestic and international … Continue reading

The Mistreatment of Tunisian Migrants: Fortress Europe ‘Protects’ Itself Against Border-Crossers

…the videos document that Tunisian border-crossers have all been put in tight, crowded spaces with complete disregard for the risk of COVID-19 transmission.

Zosia Krasnowolska is a Polish photographer and translator based in the UK. Since the beginning of the humanitarian disaster on the Polish-Belarusian border, she has become involved in a number of grassroots initiatives aimed at supporting refugees, including HELP for Refugees and Domy bez Granic (Homes without Borders, organising collections for refugee centres in Poland).

There is now also a petition by WeMove Europe, calling on the EU institutions and member states to immediately resolve this humanitarian disaster. You can sign it here: https://act.wemove.eu/campaigns/2765?utm_source=civimail-41360&utm_medium=email&utm_campaign=20211110_box