Why don’t American blacks “know they’ve got it good”? 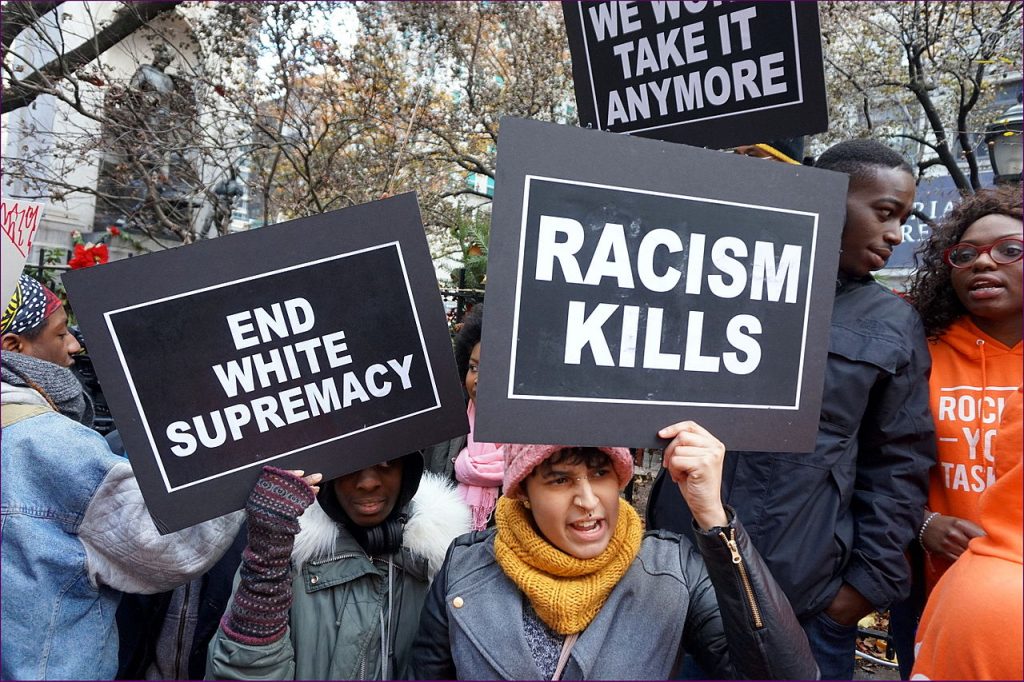 It is instructive to actually read the Saturday Australian, in particular this week, with Paul Kelly and Greg Sheridan writing on the protests in the United States after the death of George Floyd. It’s easy to rail generally against the politics and campaigning of the Murdoch press, but it may be useful to examine the arguments of these key journalists to understand the gulf in ways of apprehending the world that their thinking represents. That thinking is, obviously, not anti-capitalist, but it is not social either. For them politics flows from the realm of ideas, or ideologies; deep-set social processes that materially shape and constitute our actual world, and political action within that, do not enter into their assessments.

So, in his piece, ‘US Protests Not about Race but Disadvantage’, Sheridan says that the United States is not racist; it is anti-racist; and that US society is ‘unintentionally disadvantageous to blacks…’. Of course there is some racism, but it is not the truth of America. The position of American black people has improved immensely, and the implication is that only in the liberal West is that possible. There are guiding principles that set the American context and it is against these that we should judge such things as ‘hypocrisy’ (Jefferson), ‘stupidity’ (Trump) and ‘unintentional’ consequences (black deaths). Sheridan says that the ‘Declaration of Independence shamed America into justice on race’.

Paul Kelly, in ‘The Uncivil War Killing Liberalism’, says that the ‘essence of liberalism [of which the United States has been the beacon] has been treating people as people regardless of race, gender, sex, religion…and ethnicity’, and that it is ‘liberal universalism’ that has hitherto ‘held the social structure together’. Liberalism is the dispensation from which flow ‘steady economic prosperity, a negotiated distribution of benefits, functioning democratic systems, and societies where incentives for harmony outweighed the quest for disintegration’.

For Sheridan the ‘liberal media’ have jumped on a bandwagon to see it that ‘America has never atoned for the original sin of slavery’ (that the ‘original sin’ was actually the dispossession of Native Americans is, instructively, completely missed). To take up this position, as he says the ‘Left’ does, is to invite ongoing disputation when dispute is unnecessary given that the ‘evidence’ is in: he presents lots of statistics as to improvements in black lives, except for skyrocketing black incarceration, which shows an opposite tendency. Sheridan sees this merely as another expression of disadvantage, and nothing more.

For Kelly, for whom the arguments are more complex, liberalism is now at the mercy of ‘progressivism’. He notes two waves of it through the writings of other commentator-academics, identifying certain emerging ‘elites’ over the past thirty or so years that have introduced new cultural assumptions into the mix (Christopher Lasch) or more recently pressed identity and subcultural claims within the polity, rather than harked to universalistic values. Although there appears to be a difference in their usage of ‘liberalism’ and ‘liberals’, Kelly and Sheridan are in accord that disintegrative forces are in play, wilfully.

In neither piece is there any mention whatsoever of capitalism (their articles fill almost two broadsheet pages) or neoliberalism. For them, history is a set of ideas and actions in relation to those ideas—liberalism as philosophy, the US Declaration of Independence as ideal towards which the committed ever aspire, and so forth.

The actions of those committed to disintegration are wilful in both senses: they are individual agents making decisions to act in the way they do, and they are acting against better evidence. Kelly notes both ‘excessive individualism and the relentless rise of subcultures’ as problems; despite mentioning some possible role of technology here, the sense is that these are matters of wayward choice. Both Kelly and Sheridan, despite their differences, assume that it is via ideas, and the rationality with which we might cleave to them, that the world works. This for them is politics. There’s history, but as Kelly reveals, this is framed by certain political philosophies. Thus ‘the story of the past century has been the titanic struggle between three ideologies—liberalism, communism and fascism’. Again, not a word about capitalism, or science, and only a passing reference to technology—three inescapable material forces shaping whole systems and intimately, too, our lives as lived, not to mention the claims and issues we take into the various arenas of disputation.

In Sheridan’s piece there is no mention of austerity—poverty, indices of disadvantage, yes, but nothing that would situate the current suffering or anger of black and brown people within a recent social history related to systemic changes in the way people have been forced to live. To include the massive incarceration of black people as merely an item on a list is similarly not to register a deep-set structural phenomenon with both an immediate history and a deep social-psychological function: in the first instance, associated with neoliberalism (austerity, private jails), in the second, with the superordinate role of the state in controlling subordinate (‘frightening’, stigmatised, hated) populations, ever since the Declaration of Independence. Sheridan seems to not really grasp that what he calls the ‘great wave of civil right reforms in the 1960s’ was fought for, life and death, by black people, in a practical struggle under the conditions of a material world that radically subordinated them and named them lesser human beings; there was not some incremental accretion of rights towards a set of more or less commonly held ideals, as if that logic would simply unfold from within the thoughts of founding fathers.

In Kelly’s article the interest and complexity lie in his searching the sociological and other literature, a bit, to uncover intimations of what others of us might consider an emergent social order: a setting in which new kinds of social relationships, conditioned by economy and technology (and other factors), are emerging. However, Kelly names the key actors in this context ‘elites’, merely, and picks up only descriptively on Lasch’s view of them as ‘the new aristocracy of the brains’, who will turn against middle-class conformity, choosing to live, rather, ‘cultivating the international market in fast-moving money, glamour, fashion and popular culture’. The contrast of these upstarts is with ‘the heartland’, or ordinary folk, and fair enough as superficial description of visible phenomena of different social groupings. But not once does Kelly take this as a prompt to considering the form of capitalism that did exactly this: the one that opened up the world to fast-moving money, popular culture, and a highly novel valuation of ‘brains’ in the economy (the form of economy they and The Australian have furiously supported for the past thirty years). That this might become at some point the context of ‘cultural re-engineering’, as Kelly puts it (think culture industry, certain forms of multiculturalism), is not surprising, and presents itself as a social question, if you take a moment to think about what new capitalism/neoliberalism/globalisation has achieved. Deep-set changes in capitalist production, tied intimately to scientific technologies, and the whole edifice of institutions that this implies, are the context and creation of new social relationships that do culture in new ways.

If you look at the world as a complex of interacting systematic material forces embedded in historical economy and culture, both of long duration and in relation to emergent new forms, the pious philosophical idealism of Kelly and Sheridan becomes evident. This is a guide to why they don’t see things socially. Politics for them is ideological, or philosophical, or in other words related to ideals and the rational (or not) adoption of and disputation about them. Their complete lack of reference to capitalism, globalisation or neoliberalism is for anyone thinking socially a complete evasion of what ‘the Left’ wants to talk about: material circumstances, and how ideas are formed in, relate to and may systematically help people to avoid seeing the originating conditions of their formulation.

Seeing it this way also allows you a path into critiquing some of the same developments that Kelly, for instance, doesn’t like, but in ways that are neither pious nor idealist but socially critical—that is, growing out of a perspective on the ways of life and cultural assumptions that have emerged in the present globalised techno-capitalist order. It’s possible to agree, for example, that there are problems with what Kelly is calling progressivism, though this would be for reasons that Kelly’s framework won’t allow.

So, why haven’t black lives mattered?

Kelly and Sheridan are inclined to have it that the reason for the US protests is in part anguish (over disadvantage) but largely the result of a fashion in political identification: identity politics and the fracturing of the polity/society into incommensurate groupings that refuse to identify with the whole. More continuous improvement in black lives, we are being told, won’t happen because the liberal-democratic cause has been sundered.

But in trying to untangle these writers’ assumptions, we can see that they do not attend to recent shifts in culture and society that confirm and inflate black suffering in systematic ways. Sheridan and Kelly have absolutely no grasp of how the large philosophical positions to which they hark are and were themselves always the creatures of social/cultural conditions and histories that shaped the terms and limits of consciousness—and that means the conditions in which the ‘hypocrisy’ and ‘stupidity’ Sheridan mentions might systematically appear and reappear to shape and bolster racism, and constitute the lived circumstances of it.

If Kelly and Sheridan won’t take ‘left’ critiques seriously, they could turn to the conservative critiques of Enlightenment, and in particular of the United States as the one true cultural-political embodiment of it, by John Gray. He puts it very clearly that colonial dispossession and fundamental racism are inextricably tied to Enlightenment rationality and liberal individualism, two cornerstone elements of the practice and justification of capitalism. The structures of assumption are deep, and hidden, and the forces set in play in capitalist enterprise and Western science are material, inescapable, and often savage.