To Boldly Go: What’s in a Song? 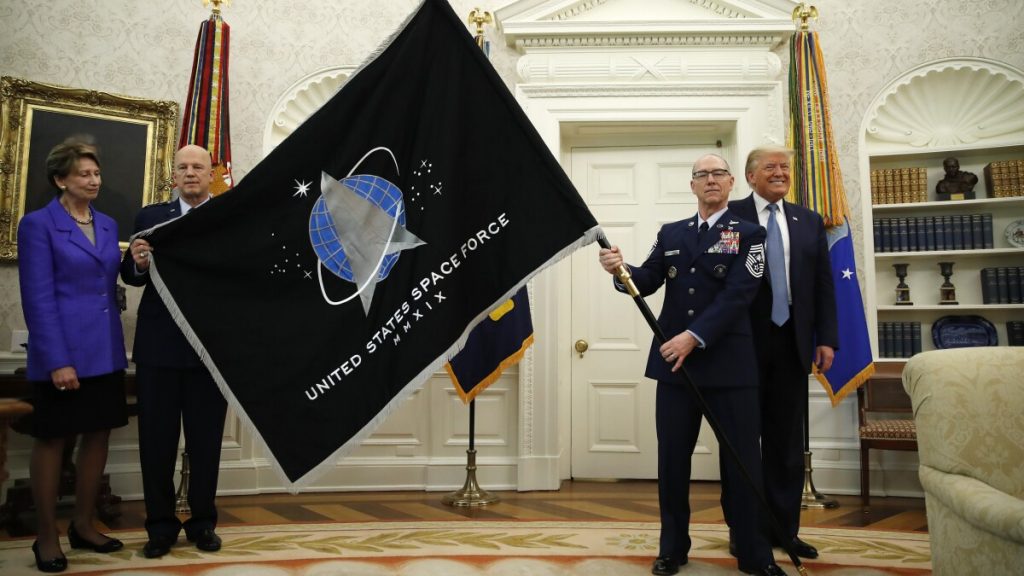 President Donald Trump stands in the Oval Office during the presentation of the United States Space Force Flag in the White House, Friday, May 15, 2020, in Washington. (AP Photo/Alex Brandon)

What’s in a song? Sometimes quite a bit, but first full disclosure: I was born in the United States, sufficiently long ago to have been an enraptured nine year old when the new science fiction series Star Trek made its debut in my family’s living room. Born in the year of Sputnik, I was only dimly aware of the Cold War as a phenomenon taking place somewhere else. I certainly had no inkling of the grim geopolitical considerations that were driving the space race, which for me comprised nothing but new-frontier aspiration and the romance of scale, distance and celestial high prairies we would soon be traversing in ever more sophisticated chariots of fire. I felt no anxiety about waking up ‘under a red moon’. Instead, I looked forward one day to waking up on the moon . . . and who knows where else?

The lure of an ever larger reality opening out towards infinity is what really caught me, a kind of comic-book transcendentalism that drove me initially towards the study of maths and science as obvious first steps on my path to wonder and interplanetary possibility. Once I encountered them up close, however, the demanding realities of science and higher mathematics did not deliver on the promise of my childhood daydreams. But the original Star Trek’s aspirational aesthetic somehow stuck. Sure, the show’s themes often creaked, and the confrontations it staged between the Klingon Empire and the Federation played out a thinly veiled allegory of America’s self-regard as the Cold War’s good guy, even as the napalm had begun to fly in Viet Nam. Yet somehow Gene Roddenberry’s chirpy vision of a future in which all of us just might manage to get along in the end—at least once we’d endured a histrionic sermon or two from William Shatner—had those of us who got it clapping along for a spell.

These small reflections frame my main matter, which concerns the so-called Space Force, a new fifth branch of the US military, constituted in the penultimate year of Donald Trump’s presidency. Recently, a dedicated service song (along the lines of the Air Force’s ‘Off We Go into the Wild Blue Yonder’ or the Army’s ‘And the Caissons Go Rolling Along’) has been proposed for the Space Force, aspiringly titled ‘Semper Supra’ (‘Always Above’):

To my mind, a simple ‘Excelsior’ (‘[Ever] Higher’) might have served better as a title, but that’s a minor quibble. What really puzzles me is whether this puff of choral inane makes me feel dead as an American, as a sci-fi fan from way back, or just as a musician. When I recall the fast-merengue (congas and all!), wordless vocalising of the original Star Trek theme, all gleaming, streamlined futurism, firmly planted in the 1960s (you can just about see the Chevrolets with big tail-fins and heaps of chrome), I can’t help shaking my head. The original series committed its share of musical clangers—feeble Stravinsky knock-offs for fight scenes, or that cheesy bagpipe theme for comic moments with chief engineer Scott—but Semper Supra is next-level awful. It’s not fair to blame John Williams directly for this muddle, but I’ve always regretted a little how the Star Wars and Raiders of the Lost Ark themes stamped a military fanfare-and-march template on this sort of thing. Even the title song for Star Trek: The Next Generation (the 1980s continuation) yielded to the same urge. They all sound a note of romping, stomping triumphalism: staccato march tattoos that would not sound out of place on a military parade ground or a half-time show at an American college football game . . . small beer among our many other gaucheries, but somehow indicative.

Contrast all this with Louis and Bebe Barron’s music for The Forbidden Planet, a 1956 special-effects extravaganza that sounded a note of caution about runaway techno-hubris, against a soundtrack of microtonal electronic tocks and shimmers, siren wails and unsettling Theremin glissandi.

Ambiguity, doubt, free-floating tonalities: a sci-fi Pierrot Lunaire that channels the ’50s zeitgeist of a postwar world coming to terms with the threat of nuclear annihilation. The film’s plot involves a search party arriving on a distant planet and discovering the remains of an ancient alien civilisation that unaccountably tore itself apart on the brink of a supreme technological advance. One of the explorers learns the cause, which he identifies as ‘monsters from the id’: the aliens’ technology had put unlimited power at the disposal of an unsuspected stratum of atavistic savagery in their psyches, which promptly expressed itself in an overnight orgy of destruction. The real monsters lurk deep down in the caverns of the mind, embedded in the kill-or-be-killed necessities of the evolutionary past.

The jaunty aggressiveness of Semper Supra brutally excludes all such reflection. Its thumping cadences echo the knuckle-dragging retro-primitivism of most fascist anthems. Cue the tiki-torches:

We’re the mighty watchful eye,
Guardians beyond the blue,
The invisible front line,
Warfighters brave and true.
Boldly reaching into space,
There’s no limit to our sky.
Standing guard both night and day,
We’re the Space Force from on high.

I suppose if you’re going to thump a tub, there’s little point in being shy about it. But what’s troubling about these lyrics is not just their strident tone but their nearly total incoherence. The words want so badly to bellow and bray, but about what, exactly? The singers declare themselves a ‘watchful eye’ and ‘guardians’ on some far frontier. Against what? ‘Warfighters’ courts idiotic tautology—the two elements of that compound have been slammed together for martial effect, with little regard for their other resonances. Even the Strategic Air Command’s motto, ‘Peace through Strength’, puts on some show of getting its priorities straight. This have-at-’em jingle leaves the poor space cadets sounding like wannabe playground bullies. It’s not quite the ‘Horst Wessel Song’ but that fascist ditty’s overtones are ringing somewhere in the background. ‘Boldly reaching into space’ badly paraphrases Star Trek’s title-sequence rhetoric, but worse, it’s not aimed at setting forth to discover what’s out there. There may be ‘no limit to our sky’ (our sky? who gave ‘us’ a key to the joint?), but the overall tone is defensive rather than expansive. I suppose twenty plus years of shadow boxing in a dishonest ‘war on terror’ were bound to warp expectations a bit. Unless these warriors of the sky are risking all to save us from rogue asteroids (‘That no ro-o-o-ck shall jar the earth’—just a suggestion), their fierce guardianship will be directed back down here, ‘from on high’ (my italics, and note the directional preposition) and placed no doubt at the disposal of security services obsessed with wholly terran foes.

That such low-balling fight-club bluster would even attempt to masquerade as uplifting vision (even the sometimes bloodthirsty Marsellaise does that better, to a more stirring tune) should surprise no one. The stunnng tone deafness of US foreign policy pronouncements across the past few decades shows no sign of slowing its descent into further depths of denial and sheer unmeaning. And the cartoonish windbaggery of this ludicrous anti-anthem, which would serve far better as parody than sincere acclaim, only adds further depth to the whole sorry picture.