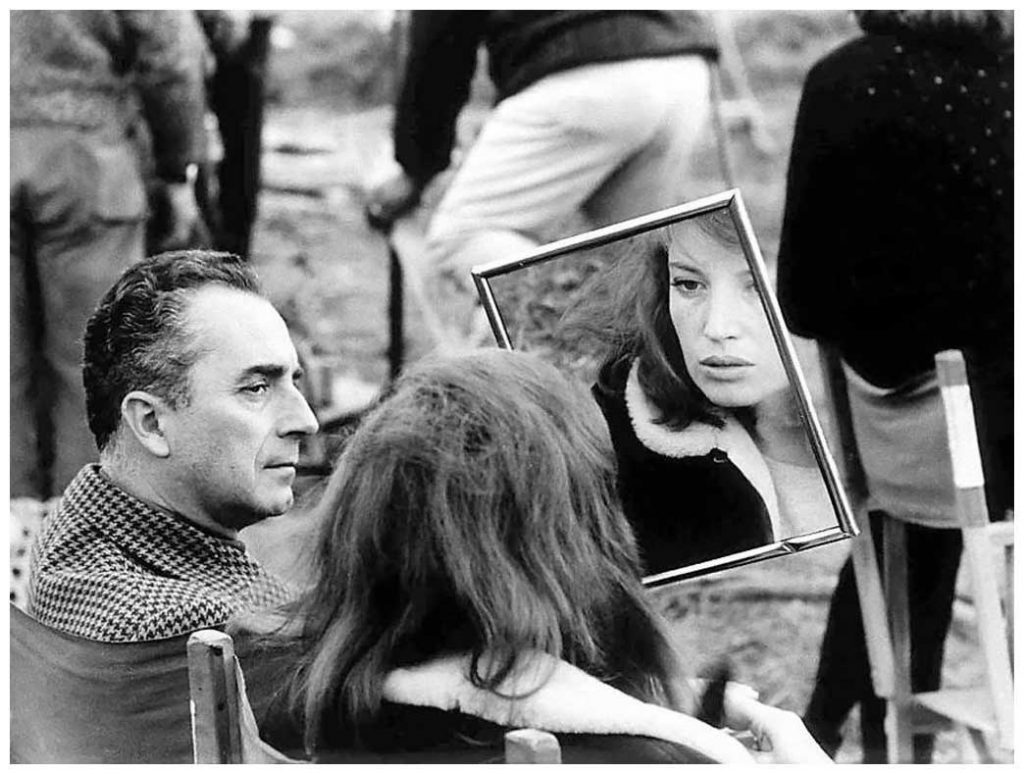 Jean Cocteau once said that it is difficult to come to terms with the fact that a person gifted with powerful élan, who sparkles bright and radiant with life, will one day simply cease to exist. This feeling is especially so, I think, when living moments of a person’s vital power are captured on film and replayed to audiences long after their death. In tribute to Monica Vitti (1931-2022), who sadly passed away this February, the Melbourne Cinémathèque scheduled a special season of four films: The Eclipse (1962); Red Desert (1964); Modesty Blaise (1966); and Jealousy, Italian Style (1970). Together, they represent a balanced selection, although just a partial taste from un sacco di (‘a sack of’) characters brought to life from the abundant generosity of Vitti’s being.

Monica Vitti’s love of performance began as a child named Maria Luisa Ceciarelli. During the Second World War in Rome, hiding from the bombs, she and her little brother would improvise plays to humour the people around them. After the war, the family immigrated to the US but Maria remained in Italy, enrolled at the National Academy of Dramatic Arts, where she became Monica Vitti. She is the exquisite flower that blossomed during a moment of artistic efflorescence in European cinema.

Vitti was an adored star of the commedia all’italiana, a distinctive tradition of Italian film comedy continuous, in some important aspects, with the much older commedia dell’arte theatrical tradition with its stock characters, black humour and the grotesque. Vitti was one of few women—alongside Claudia Cardinale and Sophia Loren—to achieve star-status within this masculine dominated system. Typical of her comedic roles is Assunta in The Girl with a Pistol (directed by Mario Monicelli, 1968), a hilarious farce about a peasant woman from Sicily who travels to sexually liberated London to assassinate the man who has dishonoured her. Vitti’s Southern Italian expressions, gestures and movements of the eye are enough to make one silly with laughter. But commedia all’italiana was not just escapist entertainment. The films used black humour and irony to expose the contradictions and tensions of a society undergoing rapid change.

Before these comedies, Vitti made a series of four extremely important films with Michelangelo Antonioni: The Adventure (1960), The Night (1961), The Eclipse (1962), known as Antonioni’s ‘trilogy on modernity and its discontents’, as well as a fourth masterpiece, often grouped with the trilogy, Red Desert (1964). The collaboration bound Vitti and Antonioni together, much like their contemporaries in France, Godard and Karina; a partnership also linked in common to a tradition of filmmaking which violently disrupted conventional cinematic rules and codes. The new narrative was subversive of realist impulses, such as the notion (or illusion) that film presents reality as it is, untampered with; it also collapsed the plot and focused instead on technique and style, rendering much more complex reflections of contemporary consciousness. Recall to your mind’s eye the scene in Godard’s Breathless (1960) with Jean Seberg in front of a mirror, when she traces with an uncertain gesture the outline of her lips. Such an intensely stylised shot is emblematic of this cinematic tradition.

As the neo-realists (to quote Gilberto Perez quoting Andre Bazin) ‘put their faith in reality’, Antonioni’s films put reality in doubt.[1] Vitti’s characters exist in mysterious worlds where appearances deceive and reality is not as it seems. The films withhold access to resolutions; incertitude clouds the facts of the case, which never gets solved, like a curtain that is thrown open to reveal the truth behind appearances, as though it knows; rather, uncertainty haunts this reality, it is cinema which does not know. Famously, Antonioni insisted that he didn’t know himself what happened to the girl who went missing in The Adventure. In other words, he knows no more than the audience; all the meaning is in the work itself, there is nothing ‘behind’ it.

This position should be taken seriously, because it provides a key to works which systematically frustrate the desire to know. Whereas the one who ‘knows’ is far ahead of anything that may yet happen and selects for the viewer just what we need to see at each moment, Antonioni’s camera instead explores the alternative, the modified angle. When asked about this uncertainty which intentionally perplexes the viewer, Antonioni quoted Lucretius: ‘Nothing appears as it should in a world where nothing is certain. The only certain thing is the existence of a secret violence that makes everything uncertain.’ The violence of incertitude is in every particle of air in this film, and Vitti’s character is like a strange traveller whose path is drawn spontaneously in the sand; the narrative follows the sundry tempests of emotion, knocking her this way and that.

As one would expect in the case of films with such an impertinent disregard for norms, they were at first badly received by the wider public. The unfamiliar method of storytelling inspired outright derision. At the Cannes Film Festival in 1960, The Adventure was laughed at and ridiculed. Vitti ran from the cinema in tears. It’s a difficult film, with its inflecting of everything with indeterminacy. This narrative style focuses on the micro level of events, on what would seem not to merit our attention but which forms the fabric of day-to-day life, subjecting the eye that frames to continuous variation. The films are irregular and subtle mediations on perspective; like the camera itself, Monica Vitti’s characters—Claudia in L’avventura, Vittoria in L’eclisse, Giuliana in Deserto Rosso view the world with intense curiosity and perplexed detachment.

Red Desert surpassed the other films of the ‘alienation series’, both in terms of its poetic nuance and the emotional intensity of Vitti’s performance. Pasolini admired it and made it central example in his essay on ‘the cinema of poetry’. The protagonist, Giuliana, has suffered a nervous breakdown and has attempted suicide. But the question as to why Giulianais sick—what is the source of her anxiety—is never raised. This is because the work does not attach any special meaning to the nature of Giuliana’s neurotic condition or her middle-class identity. Instead, it gives a form, a shape, a sound, a coloration to something that never says what it is.

Red Desert does not attach an identity to the frame of mind or mental condition of the character. As Fellini once put it, labels belong on luggage. Antonioni’s film removes affect away from psychology, preventing its reduction to the emotional state of someone caught up in a drama. Indeed, there is something hollow about Vitti’s characters in these films. Ingmar Bergman thought that Vitti was a ‘talented but technically insecure’[2] actress, but perhaps what he saw as lack of faculty was a lack—or a suspension—of a different kind, of the secure bearing of an undoubting perception. The eye of the camera duplicates Vitti’s questioning gaze; it is as though the camera pulls reality out and tilts it to the light, observing it now this way, now that, from front on or at a slightly oblique angle. It is as though the lens were a mirror which sometimes does not believe what it sees, and is surprised by something strange, altogether different from its expectations.

According to Pasolini, the intense enjoyment of the filmmaker in this peregrine freedom is based on techniques which disrupt and revise the conventional point of view shot.[3] To illustrate, when a character glances toward something offscreen, the camera cuts to a shot of the scene, ‘as seen’ by the character, in mimesis of their point of view. This shot sets apart the subjectivity of the character from that of the filmmaker. Like in literary fiction, when the character’s speech is bracketed off in ‘speech marks’ from the rest of the narration. Antonioni’s use of the point-of-view shot was strikingly original. Pasolini compared it with the technique in prose fiction known as ‘free indirect speech’, where the point of view of the character is not indicated grammatically with special punctuation but is immersed in the narrative, saturating it with language and consciousness of that character.[4] In the history of cinema, no other collaboration between filmmaker and actress has achieved this peculiar substitution of point of view. Antonioni effaces himself in the character, and we have a subjectivity liberated from the constraint of bracketed point of view. In turn, we are surprised with an autonomous consciousness. Pasolini termed this licenced trespass into the character’s inner world—based fundamentally on the erasure of the filmmaker’s governing vision—a ‘free indirect point of view’ shot.

Monica Vitti had wide, alert eyes that pinched at the corners like a cat. Her eyes were like lights passing the familiar intimate things we normally regard without afterthought, as simple and unambiguous—she scans the objects, materials, things around her—with inquisitive playfulness, spontaneous and surprised strokes, which never calculate. Her eyes transmitted attention without intention. Her delicate hands caressed the surfaces of reality. At times, it seemed she trembled, as though ravished by the scene taking place around her. She brought a vital intensity to these moments. Watch Vitti turn her head slightly, the camera follows her gaze over the sky, the unfinished houses, the shapeless water leaking from a well, without grasping anything, then it performs only the slightest movement, and once again the object stands out beyond the known and familiar.

Antonioni’s way of filming consists in reminding the viewer that what is out of frame holds in reserve other arrangements of images that could entirely disrupt its identity. Bringing the out of frame or the off-centre in to modify meaning and perception, the films disturb the viewer’s comfort in relation to our identity. It shows us the startling effect of a new vivid light that falls on the most familiar objects—it’s a de-familiarising gaze.

In The Invention of Morel, a mystery novella by Adolfo Bioy Casares, a fugitive hiding on an island inhabited by a party of attractive youths falls in love, from a distance, with one of the women. Eventually, he discovers that she and her friends are actually holograms. An outsider in a strange land loves a woman where she does not exist. In her own world, Vitti’s characters seem like strange visitors, among inhabitants and surroundings which seem to vibrate, shake, glitch with the fragility of meaning. Monica Vitti’s special quality was to translate that secret violence into the most present things with vital intensity, making the viewer sense that we miss so much of the world when we subordinate subtlety to the familiar comforts of established meaning.