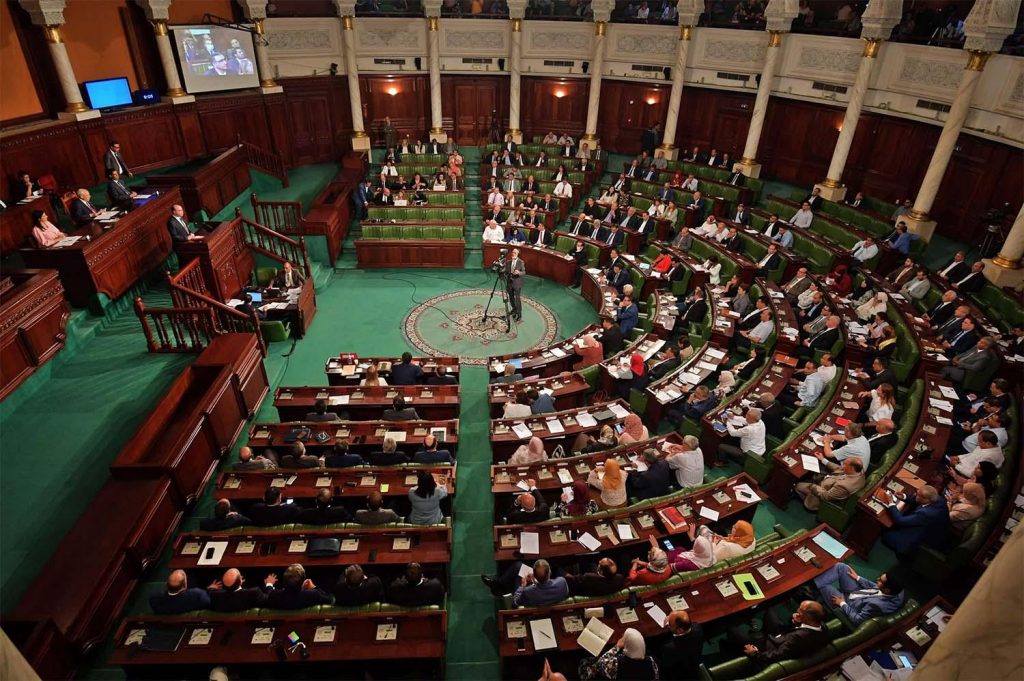 What is the point of having many women MPs if they suffer chronic abuse in parliament?

On 25 July 2021, Tunisia, the birthplace of Arab revolutions, made headlines in the international media because President Kais Saied suspended parliament for thirty days and ousted the government.  While Islamist parliamentary speaker Rached Ghannouchi and his allies decried the president’s move as a ‘coup’ that had to be opposed on the streets, the vast majority of Tunisians were delighted, as they blamed MPs, especially members of Ghannouchi’s Ennahdha Party, for the country’s economic and political paralysis. Thousands of Tunisians took to the streets—not to fight the so-called ‘coup’ but to sing, dance, set off fireworks and ululate in support of the president’s move.

Tunisians celebrated Saied’s decision to suspend MPs’ legal immunity, which allowed many of them to abuse power, telling journalists: ‘We have been relieved’. Most people are relieved  at the prospect of getting rid of corrupt MPs who have worsened Tunisia’s economic woes and failed to respond to the COVID-19 crisis. Women’s rights activists and feminists are also relieved that a parliament that has failed to protect women’s rights will be held accountable for its MPs’ behaviour.

Tunisia boasts a high number of women MPs. As a percentage, there are more female MPs in the Tunisian parliament than in the Australian and French parliaments or the US Congress. However, the reality is much more complex than this pink picture.A video posted on the YouTube channel of female MP Abeer Mouci provides a good illustration of this reality.

The video was filmed on 30 June 2021 and shows an attack on Mouci by her male colleague Essahbi Smara in Tunisia’s parliament. This attack was followed by a second assault by the male MP Seif Eddin Makhlouf, who threw banknotes at Mouci and called her ‘filthy’. While this slur aimed to remind Mouci that she used to support the corrupt regime that ruled the country before the revolution, in the Tunisian context this degrading term has sexual connotations. Indeed, when addressed to a woman, this bad word often aims to shame her by equating her with ‘fallen’ and ‘dishonoured’ ‘sluts’. Makhlouf also used zoomorphic derogatory terms such as ‘monkey’ and ‘ewe’ in order to humiliate and degrade Mouci. It is noteworthy that this was not the first time Makhlouf has insulted Mouci. He has yelled at her, addressed her using foul language and pushed her in parliament on multiple previous occasions.

What was even more shocking in the video was the reaction of Samira Chaouachi, the female deputy speaker of the Assembly of the People’s Representatives, who witnessed the aggression. On 30 June 2021, Chaouachi replaced Ghannouchi, the house speaker, who is mostly absent during plenary sessions. Chaouachi simply asked the aggressor to leave so that she could suspend the plenary session for three minutes. The video shows Chaouachi playing with her phone with complete disregard for the brutal act taking place in front of her. The most shocking reaction, however, came from the minister of women, Imen Zahouani, who completely ignored what happened. The video shows that Zahouani did not respond to Mouci’s angry, ironic question: ‘Are you the women’s minister?’ In her fury at the minister’s disregard, Mouci kept repeating her rhetorical question over and over without any answers from Zahouani.

Many Tunisians were shocked by what happened and asked to lift the violent MP’s parliamentary immunity so that he could be punished. Tunisia’s President Kais Saied, Tunisia’s League of Human Rights, Tunisian civil society and the United Nations all condemned the attack on Mouci. Yet, unfortunately, the attack was not the first instance of violence against Tunisian women MPs. Sadly, the brutality inflicted on Mouci must be situated in relation to a series of assaults by male politicians on their female counterparts in Tunisia’s parliament, which combine verbal abuse with physical assault. A few months ago, on 18 March 2021, the Ennahdha MP Naji Jemal hit his parliamentary colleague Zeineb Safari, who belongs to Mouci’s party. Safari started to record Jemal’s verbal aggression towards Mouci, who refused Ghannouchi’s attempt to ban her from attending the executive assembly meeting. Scared of Safari’s video, Jemal snatched her mobile phone, threw it on the floor and slapped her in the face in Parliament.

It is important to highlight that misogyny has not been directed solely at the female parliamentarians who belong to parties that support secularism. Even the female members of the Islamist party Ennahdha have experienced their share of sexism. For example, Meherzia Labidi, who used to be deputy speaker of the constituent assembly, was mocked for being a woman. This happened in 2014 when Labidi criticised the government’s lax attitude towards the terrorist group Ansar Sharia. In a television interview, Beji Caid Essebsi, founder of the Nidaa Tounes party, which portrayed itself as defending women’s rights, responded by saying, ‘Meherzia Labidi is a woman; she is just a woman’.  Essebsi’s comment aimed to degrade Labidi by dismissing and trivialising her ideas through mocking her femaleness.

What Essebsi said infuriated many Tunisian women. Yet, unfortunately, Labidi was not the only female MP affiliated with Ennahdha who was subjected to sexism. Souad Abderrahim is another case in point. She was targeted by many misogynistic attitudes when she campaigned to become the Sheikha of Tunisia’s capital city, Tunis. In May 2018, Abderrahim was elected as the first-ever female Mayor of Tunis, after a run of thirty-two male mayors since 1858.  The position of Tunis Sheikh (mayor) is very important due to Tunisia’s centralised system of governance, and it can be compared to the position of a government minister. Abderrahim, who ran against ten male candidates, dedicated her victory to the women of Tunisia. However, this achievement did not come without strong opposition due simply to Abderrahim’s femaleness.

In fact, members of the secular Nidaa Tounes dismissed and laughed at the idea of electing a woman for this important role. Nidaa Tounes expressed its preference for its male candidate, Kamel Idir, and considered him better placed to be the capital’s mayor. Fouad Bouslema, who presented himself as the secular party’s communication officer, expressed his opposition to having a woman head the Tunis municipality: ‘Imagine a woman on the 27th night of Ramadan in the mosque? This is not acceptable; there are religious celebrations and we have traditions in the mosques. Unfortunately, we are an Islamic country’.

Bouslema’s sexist comments referred to women’s inability to pray in mosques when they have their period because they are not considered ‘pure’ during that time. One of Bouslema’s subtle misogynistic messages was: what if the female Sheikh has her period on the 27th night of Ramadhan, which is the most sacred night of this holy month? The strong backlash caused by Bouslema’s misogyny forced his party to distance itself from him. Abderrahim responded by pointing out the non-existence of any legal or religious reasons that could prevent her from going to the mosque on this holy night, insisting on the equality principle that is guaranteed by the country’s new constitution, which stipulates that all female and male citizens have the right to run for presidency.

Unfortunately, despite this constitutional principle of equality—which is supposed to rule the country and parliament—violence against women has been increasing since the Tunisian Revolution.Violence against female members of parliament is only one manifestation of this mounting sexism, which has taken various forms: verbal abuse, rape, kidnapping, and beatings of women and girls. The increasing conservatism caused by the rise of Islamism has coupled with the lack of security that accompanied the regime change. The result is an intensification and normalisation of attacks on women by both Islamists and many of those who present themselves as ‘progressives’. We now witness such attacks routinely in parliament. This is one reason for the joy Tunisians felt when the president decided to freeze what most of them see as a useless institution.