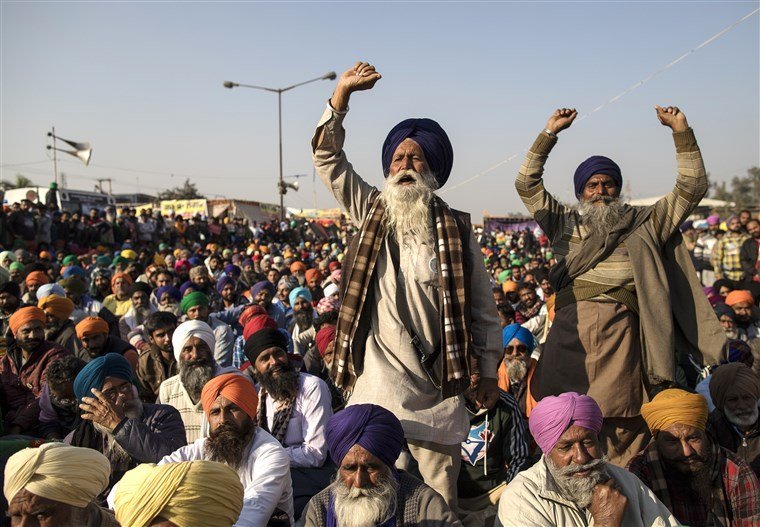 Indian agriculture has been facing a severe crisis in the recent years. This crisis has been building up for much of the last three decades and is a result of, most importantly, the neoliberal policies that have, one the one hand, resulted in a reduction in the level of public support and subsidies that are provided for agriculture and, on the other, exposed Indian agriculture to global competition. With increased cost of production and depressed prices for their produce, farmers have faced an income squeeze, with a vast majority of them incurring losses in agriculture. For example, in 2017–18, about 70 per cent of wheat producers, 83 per cent of rice producers, 81 per cent of chickpea producers and 85 per cent of cotton producers did not even recover their full costs of production.

In the second half of 2020, the government of India enacted three new laws. These laws have significantly changed the legislative framework to pave the way for an unbridled penetration of private corporations into agriculture and the system of food supply. Of these three new laws, the Farmers’ (Empowerment and Protection) Agreement on Price Assurance and Farm Services Act (FAFSA) provides a national framework for contract farming with very little scope for public regulation. The second Act, the Farmers’ Produce Trade and Commerce (Promotion and Facilitation) Act (FPTCA), is aimed at deregulation of the agricultural marketing system. Thus far, agricultural marketing has been governed through the state-level APMC Acts under which state governments established regulated markets where, in addition to private traders, public procurement agencies operate to procure grain (mainly rice and wheat) at the Minimum Support Prices. With the FPTCA, the government has made it possible to bypass and provided incentives for bypassing the system of regulated markets. This will move the business out of regulated markets, and thus weaken the system of public procurement. With the enactment of the Essential Commodities (Amendment) Act 2020, the government has considerably weakened the regulatory provisions for imposing limits on private stockholding by big traders and companies that are part of the food supply chain. These provisions were key government interventions against market manipulations by large traders and companies.

Although they were expected to be unpopular, the laws were enacted while the country was dealing with the COVID-19 pandemic and a lockdown, in the hope that restrictions on travel and political assembly would help to prevent any large-scale protests against the laws. This, however, turned out to be a miscalculation. Despite various  hurdles created in the name of the pandemic, protest broke out in many states soon after the laws were introduced in the form of emergency ordinances in June. These protests intensified after September, when the laws were passed in the parliament. The protests were most widespread in Punjab and Haryana, the two states that have very strong systems of regulated markets and public procurement. In Punjab, key train routes were blocked by protesters for several months and large-scale protests were organised across the state.

In November, farmers organisations declared that farmers would march to Delhi in their tractors and protest in the national capital on 26 November. The government responded to this call by imposing a curfew in Haryana and blocking the highways connecting Punjab to Delhi. The Haryana police blocked the highways using concrete boulders, barricades, sand-filled containers and trucks, and even dug up some of the roads. However, the day was won by farmers. They overcame all these barriers—braving police batons, tear-gas shells and water cannons—and drove their tractors right up to the border of the national capital. When they were stopped from entering the capital, the protest turned into a sit-in at the border. Over the coming weeks, many more farmers from neighbouring states joined and started protests at several other entry points to the national capital. Farmers have parked their tractors and tractor-trolleys at these protest sites, pitched their tents, set up community kitchens and established other common facilities.

As the protests gathered strength, an institutional structure emerged in the form of Samyukt Kisan Morcha, a joint platform of a large number of organisations from different regions and having their base among different sections of the rural population, for democratic decision-making and negotiations with the government. It is noteworthy that, while farmers have built solidarity across states, between different classes of rural society, and between different castes and communities, the ruling party and its machinery have been working overtime to create divisions between organisations and communities, and accusing the movement of infiltration by separatists and terrorists.

The government initially maintained a facade of negotiations with the protesting farmers, and several rounds of discussions were held between senior ministers of the government and leaders of the Samyukt Kisan Morcha. However, the government was unwilling to consider the key demands of farmers and, in meeting after meeting, merely repeated its position that these laws were in the interests of farmers and that they had been misled by political opponents of the ruling party. These talks broke down in the last week of January and no further discussions have taken place between the government and the Samyukt Kisan Morcha since then.

After 26 January, when farmers carried out a tractor march to mark India’s Republic Day, the government hardened its stance, and instead of continuing the dialogue, started using repressive tactics. A number of activists were picked up by police, with protest sites being attacked and protesters threatened. Authorities shut down the Internet around the protest sites and in all districts of Haryana. All the while, the mainstream media went into overdrive to brand the protesters as anti-national.

The protests have survived these attacks, however, and have continued to grow. This has been possible not only because of the collective resolve of the farmers but also because these protests have received wide social support. Various sections of society, including agricultural workers, trade unions, professional organisations, students and youth organisations, as well as various other kinds of group, have expressed solidarity and provided support to the movement. Strengthening this solidarity, and ensuring the active participation of these other sections of working people, is crucial for sustaining the struggle. This requires finding ways to overcome caste, class and gender barriers, and forging a united resistance against all anti-people actions of the government.

Sustaining the movement has also required the large-scale mobilisation of resources. As farmers take turns to keep the protests running, each new batch that comes from villages to the protest sites brings supplies along with it. A large number of people visit these sites every day to express their solidarity and make contributions—financial, in kind and in the form of their labour in community-service activities. Artists and musicians have created an incredible amount of music in solidarity with the movement, and have been performing regularly at all the protest sites. Support has also come from other sections of society and from the Indian diaspora.

This struggle has already become a major milestone in the history of India’s development. It also has the potential to become a major turning point. Of course, only time will tell what its long-term impact will be.

The Conviction of Protest: Sedition and the Farmers Protest

Both sedition, the charge of publicly expressing disagreement with or hatred for the king, and its twin, loyalty or love for the state, belong to a political space predicated on the king’s exclusive embodiment of sovereignty and hence on the violent suppression of disagreement.

Vikas Rawal is Professor of Economics in Jawaharlal Nehru University, New Delhi. His main research interests are in the area of agrarian studies. He has conducted detailed field-based studies on different aspects of agrariain relations in India. In the recent years, he has also been conducted research on the global issues related to food and agriculture.