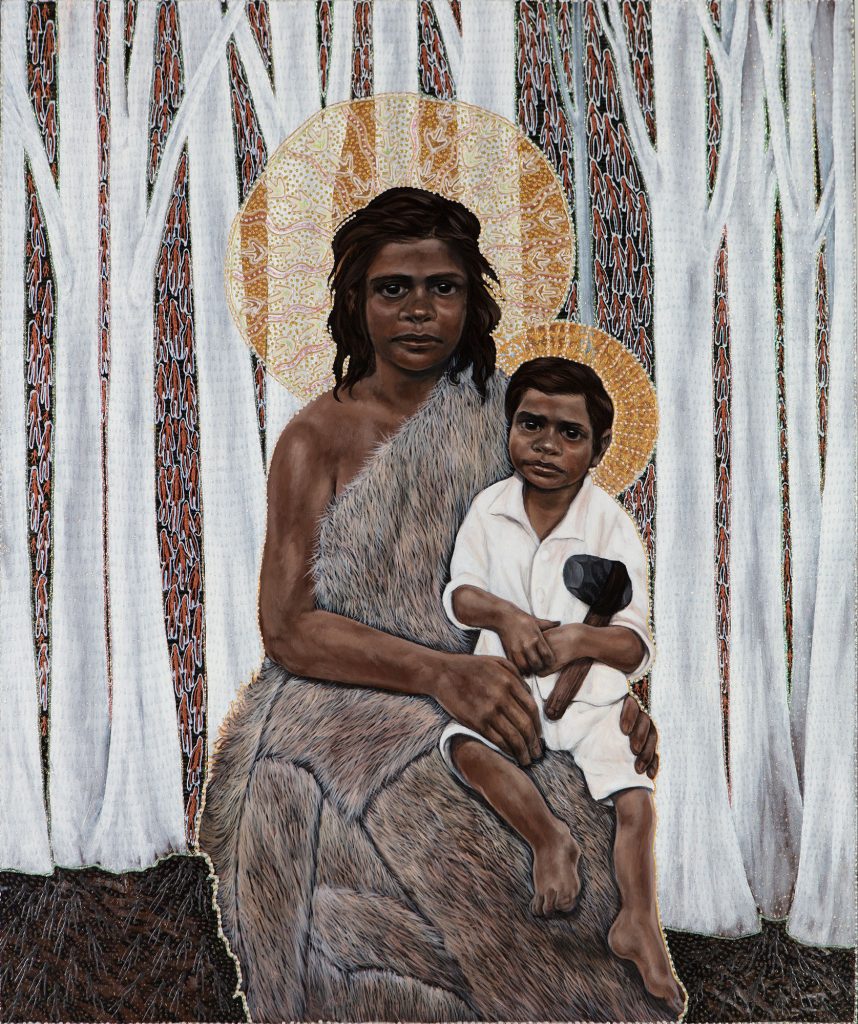 In 1962, a columnist with the Melbourne Herald noted that a sixteenth-century sculpture of the Madonna and Child would be on that year’s Christmas stamp. He went on to praise ‘Our Lady of the Aborigines’ as ‘a real Australian Madonna and Child’ before asking, ‘How about it for next year?’

The painting was by Karel Kupka, a Czech who lived and worked with Aborigines in northern Australia on and off from the mid-1950s. Darwin’s Bishop O’Loughlin commissioned him ‘to bring religion to the people in terms of local understanding’ by creating for Star of the Sea Cathedral something similar to Chinese and Japanese Madonnas.

The Virgin’s face is individual and the child a person, each expressive of ‘nobility and natural dignity’, in the words of the Darwin missionary Father Frank Flynn. Our eyes are drawn to the arrangement of the figures, like a Byzantine icon’s, and the flatness in Indigenous imagery. The backdrop and the haloes are cross-hatched. Instead of being cradled, the Christ child is perched on his mother’s shoulder, in the manner of Tiwi Islanders.

Colour reproductions sold throughout the world.

When Pope Paul VI visited Australia in December 1970, the Vatican issued a pair of commemoratives. One was of St Mary’s Cathedral in Sydney. The other showed Kupka’s ‘Our Lady of the Aborigines’.

Indigenous designs on stamps appeared from 1930 as a framing device. Scores of stamps have depicted arts and crafts, but no named individuals appeared until Albert Namatjira in 1968—and only in a booklet along with the busts of three un-settlers—and Truganini for 1975 International Women’s Year, before gold medallists starting with Cathy Freeman in 2000. At the moment you can buy one featuring Sir Doug Nichols.

In over sixty-six years of Christmas stamps, Australia has never issued one featuring an Aboriginal artwork, let alone a Black Virgin and Christ child.

To ponder why not is to range through religion, politics and commerce.

As Kupka painted ‘Our Lady of the Aborigines’ in 1957, the Postmaster-General worried about what to put on the first Christmas stamp. His government had endorsed the effort to ‘Put Christ back into Christmas’, a counter to the ‘Xmas’ of the market.

That campaign was one element in a decade of revivalism. Two months after the defeat of the referendum to ban the Communist Party in September 1951, Church leaders and the Chief Justices of every State had signed ‘The Call’ to FEAR GOD, HONOUR THE KING in order to conquer moral apathy. In 1953, Father Peyton brought ‘The Family That Prayers Together, Stays Together’ from the United States; Sydney’s Rev. Allan Walker initiated the biennial National Christian Youth Convention in January 1955. Proselytising culminated in 1959 with the Billy Graham Crusade, for which Jimmy Little starred in a promotional docu-drama, Shadow of the Boomerang.

In those days, acceptance of Christianity as the national faith was as wide as its sectarianism ran deep. Some Protestants feared the Scarlet Woman of Rome as much as the Red Menace from Moscow. Anti-Papism was complicated by those Protestants who looked upon any religious image as idolatrous. How to put Christ back into Christmas while ignoring his mother was a puzzle for more than the theologians.

Postal officials hoped that they had found a solution in adapting ‘A Child at Prayer’ by Joshua Reynolds. Since then, most of the religious images on stamps have been of European high art, with only a couple by local un-settler painters, including one Old Master from a Melbourne art student in 1970.

While the threat on the world stage was atheistic communism, the challenge at home came from capitalism as affluence and advertising gained ground with rock-’n-roll, television, poker machines and moves by trading banks into hire purchase. In 1957, fifty manufacturers, wholesalers and retailers set up the Father’s Day Council to peddle aftershave and cuff-links.

Stamps also became merchandise, with new issues going from four in 1957 to forty or so by 1980.

Suitable subjects shifted from the Windsors and local fauna to the Country Women and Young Farmers, before honouring the Sydney Stock Exchange in 1971 in the backwash of the Poseidon scandals.

Given their original intent, the Santa on a surfboard for 1977 brought outrage, but during the 2000s, the standard became two Christian and four commercial.

The Catholic-Protestant divide has been displaced with fracture lines through a multi-cultural society from what the British Army once called ‘fancy religions’. The numbers reporting no commitment have also shot up. More than half of those who identify as Aboriginal describe themselves as Christian.

The booming market for Indigenous art did nothing to prevent a bomb of vitriol pouring over Vincent Namatjira after he took out the 2020 Archibald Prize for a portrait of himself with Adam Goodes.

Even with support from a choir of columnists at the Melbourne Herald, for Australia Post to seek permission from Julie Dowling to reproduce her ‘Black Madonna: Omega’ (2004) on next year’s Christmas stamp—fifty-two years after the Vatican issue—might prove ‘courageous’.

This piece can also be accessed here.