Editorial, Arena no. 8: Battening Down the Hatches 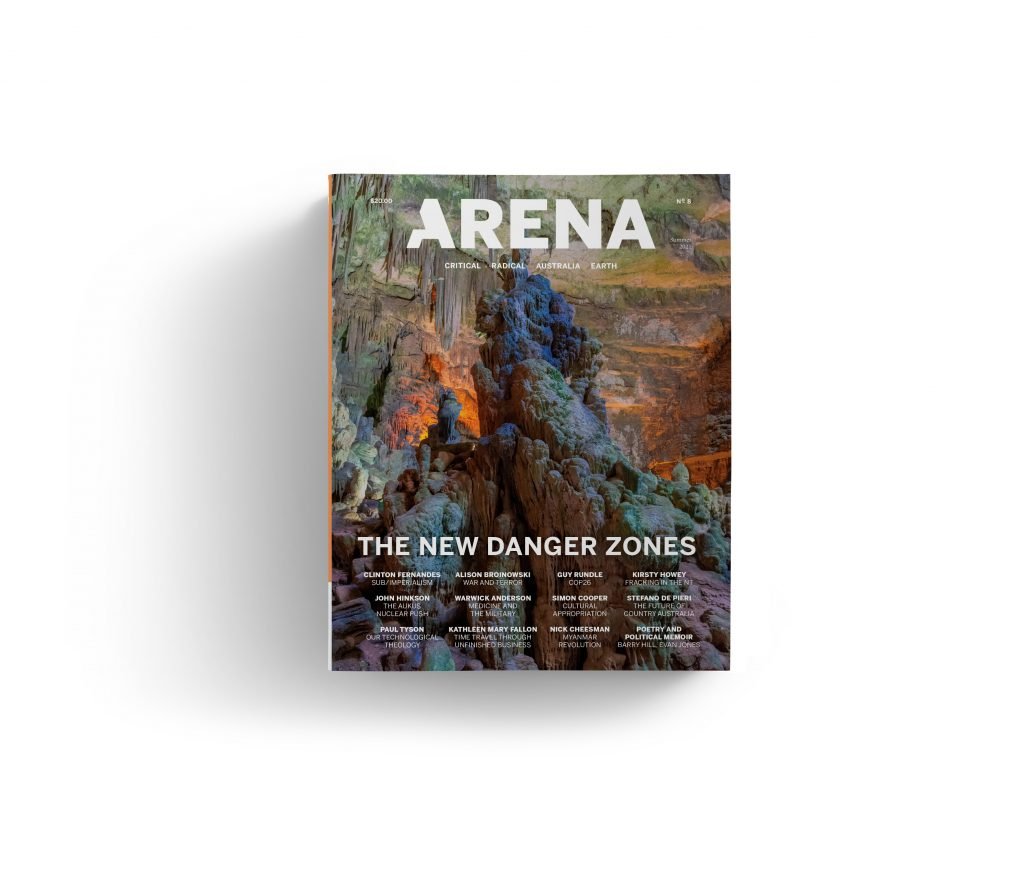 It’s a pity we don’t have a happier story to tell in our summer issue and at the end of various lockdowns.

In fact, there has only been a strengthening of the dire situation in which the world, and Australia, has come to rest at the end of 2021. Much is being revealed of a more divided society and body politic than we might have thought. COVID continues to stalk both the Global North and Global South. War is on the agenda locally, as our corrupted government vests Country, and tries to orient our soul (such as it is), to the needs of US imperium. China is battening down the hatches ever more firmly, with unforeseen consequences economically for a globally integrated world (whose material exchanges and supply chains have already faltered in the period of COVID). Global warming remains either an aside in national performances of climate chauvinism or, as for most of the world, merely a technical problem to be solved by clever humans. And all of this in a growth-driven and technology-obsessed culture generally, whose imperatives and fancies are at work in every sphere of personal identity and collective life.

Despite all our problems—all our terrible forebodings—it seems we remain wedded, yet, to a form of life that is, simply, unsustainable, and to a form of human organisation that is ethically bankrupt. This is to be blunt, but what can one say when, as Guy Rundle argues convincingly in this issue of Arena quarterly, that COP26 represents little more than an awakening of capitalism to the need for a new accounting program. Or, as our three writers on AUKUS make clear, that we are suckered to a global hegemon militarily and culturally, and sleep-walking towards the telos of a long-embedded history of sub-imperial cringe and puffery. Masochist and sadist, we think power, BIG power, is good for us. And here we are, Australia’s symbolic and spiritual Centre in the sights of an enemy that has been largely crafted for us, if now real enough for all that. Even more, if Morrison and co. have anything to do with it, we are embarked on a path not just to nuclear power, but as John Hinkson points out, the nuclearisation of our society, a move that would be massively consequential for the tenor and timbre of a distinctively Australian life.

Pine Gap as target; US bases on Country; a blind commitment to what Clinton Fernandes calls our sub-imperial identity; the militarisation of civil society (our universities, our economy) to support the techno-scientific complexity of nuclear power: this means immersion in a way of living and being, not simply the making of alliances or making use of new technologies.

If our broadly common attitude is that of sleepwalking towards potential catastrophe, it is because people don’t really ‘get’ what the consequences might be of war, or the nuclear power option, or of catastrophic climate change, on the ground. There is little historical concreteness for most Australians to these propositions. More importantly, people don’t have a social imagination, or not much any longer, that can either conjure or logically extrapolate how our beliefs and actions and their consequences unfold according to pressure and force beyond individual agency, or what in some circumstances we like to think of as our ‘good intentions’. Alison Broinowski in this issue reminds us that good intentions had nothing to do with the twenty-year war on Afghanistan, and that since 9/11 at least we have been drawn into fabrications about Terror that have become a self-fulfilling prophecy. That prophecy now propels us into ‘forever wars’. The consequences in securitisation and surveillance as mindset and technological practices, not to mention a quite generalised psychology of fear, have already unutterably changed the timbre of life from a generation or two ago.

At another level, we are not only swept along in the wake of big powers and global hierarchies. More deeply, culturally, we are immersed in structures of meaning and practices that found and repeat basic value commitments and attitudes, which ramify across the spheres of common life. Our commitment to BIG is one such. Guarded and desired, it emerges proudly everywhere. In our culture, to fall under its sway is not to be oppressed; rather it is generative of a welcome way of being and seeing. BIG economy, BIG population, BIG technology, BIG infrastructure, BIG surveillance, BIG mining, BIG military, BIG data, BIG extractivism, BIG agriculture. Even where new technologies are intimate, medical even, their aspirations are often HUGE.  ‘Growth’, ‘expansion’, the sneaky entrepreneurialism of ‘innovation’ that only hopes also to be BIG, technology for total transformation, are the talismans of today’s capitalist culture. They keep the ‘wheels’ turning and, apparently, ‘hope’ among the ordinary folk alive. (Certainly our billionaire tech entrepreneurs give us plenty of circuses.) We think of ourselves in the West, and as unruly Australians especially, as hard to con, and as hardly totalitarian, and yet there is a pervasive desire to anchor our lives in an imagined guarantee that big powers—imperial states, mining conglomerates, big tech—seem to proffer. And we thus live by the imperatives of the systems they captain and the structures of life their products compel and communicate, largely unaware of the forces shaping us.

Perhaps it was ever thus. Cultures and societies are tied together mysteriously, unconsciously, and there are always ‘powers’, or bigger principles, around which distinctive cultural attributes coalesce. Yet ours is a distinctive make-up. The bigger principle in ‘late capitalism’ is premised on a system requirement of expansion, dependent on ‘creative destruction’ for continued (‘limitless’) growth, and on the satisfaction of our apparent self-framing as boundless in our capacities. Science and technology as applied in capitalist enterprise and to its global communicational, administrative and military/security systemisation, are radical means, always pushing aggressively towards and past limits, even the most basic of them, as in nuclear technologies. Any such limit, like those to planetary health, or remnant ethical framings of life in the image of some greater social good, stand in the way of a culture and economy that are automatised around means, oriented towards as-yet unknown horizons.

If there are surprising political divisions emerging in the present context, as in the seemingly growing, increasingly vociferous anti-lockdown and anti-vax rallies in Victoria, it might be tempting to see them as a break-out from the suffocating forms of systems integration I have been suggesting. Indeed they appear to be anti-Big Pharma, anti-Big state, and anti-police. There are elements of topsy-turvy, or the upending of class conventions, and rebellion is suggested in the flying of the Eureka flag. But add in QAnon, and the pressures of pandemic conditions, and we know that this is not a movement with a deep history, or an embracing perspective on the society it seems to be refusing. It may be in some way a release of the suppressed energies of outcast classes, but conspiracy and pandemic draw a motley lot together. Some seem to refuse any form of the social, and may be stock-market libertarians or just plain Dan-haters; some are members of the working poor now losing their jobs as they refuse mandatory vaccination; some are intellectually trained wellness aficionados, with more or less muddled or developed views; others still, that free-floating and opportunistic body of the hateful that rears its fascistic potential especially during crises and downturns.

Part of the problem for all of us is indeed the mystery of the social—figuring out what it is that presently binds us in such complex ways as to obscure a true accounting of our form of life; and figuring out what could be new forms of the social by which being in the world, with others and in relation to the ‘natural’, might be reborn. In the shadow of the upsets of COVID some people are having to rebuild their lives; others too, in prospect still of runaway climate change, are reconceiving what matters to them most. A spirit of independence is one energising place to start—a rejection indeed of big powers and big power—but as a spirit in politics that has come to grips with the full meaning and implications of its agenda, and in life is expressed through practices and relations that bind us to more grounded identities and communities than techno-capitalism’s open horizons allow.

Whilst I share many of Alison’s (and Arena authors’) anxieties, I find this editorial both puzzling and depressing. The use of the word ‘culture’ to explain some purported commitment to BIG; that there are cultures and societies (are these the same thing?); that they are both ‘mysteriously, unconsciously’ tied around ‘powers’ or ‘bigger principles’. Well, yes, welcome to history! That the only available opposition to our destructive culture of the BIG is the anti-vaxx/ Lockdown protests, that they are correct being anti-BIG but have not yet thought through the implications; that what used to be called ideology is here parsed as the ‘mystery of the social’. This, is an utterly defeatist, despairing editorial which speaks to the collapse of anything that might be called ‘left’ in Australia and the deep responsibility a particularly Australian version of cultural studies has for this predicament. Politics, history, ideology, sociology – these might have some clues to the ‘mysterious social’ and perhaps have more insight than a minority of any-vaxxers in Melbourne.