Postcard from Maningrida: COVID Comment from the Forgotten Corners of Remote Australia 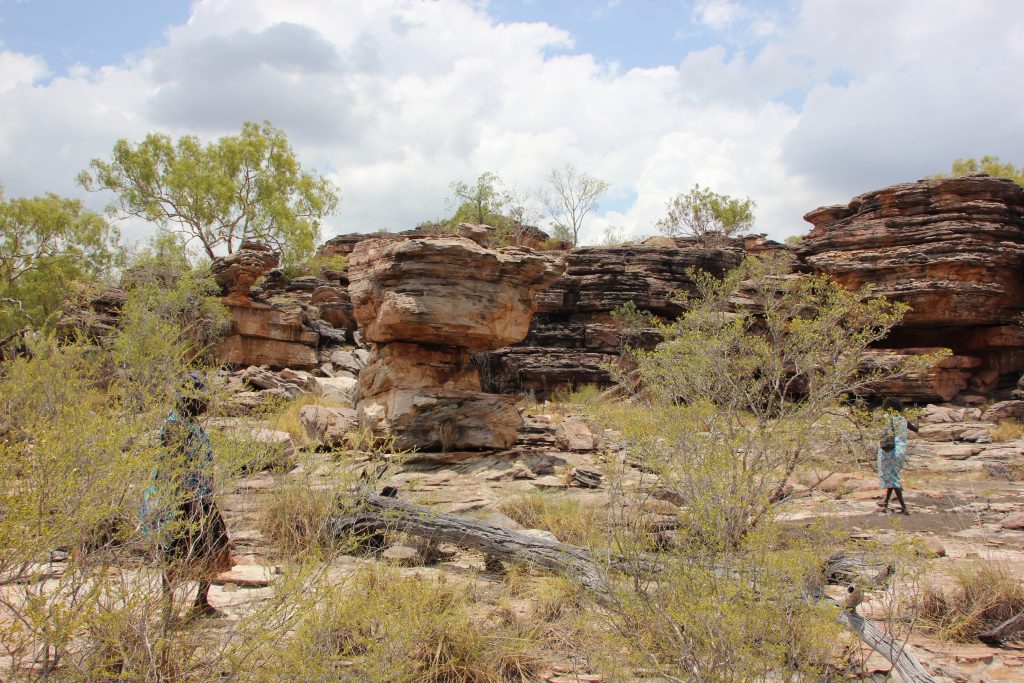 While we have watched the COVID-19 pandemic sweep across the globe, various social and administrative reactions have seemed universal: the panic buying and empty shelves, the surges of unemployment, Zoom meetings galore and mass population lockdowns.

However, in the forgotten corners of remote Australia, Indigenous communities have experienced the pandemic very differently.

The community of Maningrida has a population of approximately 3000, and lies on Kunibidji country where the Liverpool River meets the Arafura Sea. Maningrida is a true melting pot of Aboriginal cultures and languages, with more than twelve languages spoken around town, and many people speaking five or more of these. In the dry seasons this Central Arnhem Land community is an eight-hour drive from Darwin across vast floodplains and rock country, but during the wet seasons Maningrida road access is entirely cut off, with fresh supplies arriving by barge and travel outside the community only possible by light plane.

As the news of this new kundjak (sickness or disease, in the Kuninjku dialect) trickled into town in the early months of 2020, rumours spread of its imminent arrival. Months later, thanks to the success of the government’s population-movement restrictions and biosecurity laws championed by the local Aboriginal corporations, land councils and regional shires, miraculously there has been no case of COVID-19 in remote Arnhem Land. Despite the absence of kundjak in town, however, various changes have been felt on the ground.

The panic buying experienced across most of Australia did not hit Maningrida. One can only assume that this was because to bulk buy food, people need to have the luxury of discretionary income. For many weeks while the rest of Australia experienced shortages of toilet paper, food and other products, the shelves in Maningrida remained plumply stocked.

This changed in early April when the $750 stimulus arrived.. People were noticeably elated. Their elation was not because they could now panic buy before the kundjak arrived but because many families live in a constant state of deep poverty and food shortage, and this additional income would relieve that pressure for a few weeks.

In a response to COVID-19, fines and suspensions for participants who do not meet their ‘work-for-the-dole’ commitments in the government’s Community Development Program (CDP) have been put on hold. In normal circumstances, these welfare fines are issued due to  ‘invalid absences’ (including extended funeral or ceremonial attendances), unexplained and often health-related absences and in some cases CDP/Centrelink administration failures. Such fines result in participants’ payments being reduced or suspended, and they have severe repercussions on people’s livelihoods and ability to buy food.

As detailed in Jon Altman’s recent Arena Online article, the lessening of the government’s punitive CDP measures and the doubling of JobSeeker payments are good outcomes for remote communities that have resulted from COVID-19. Hopefully, both of these will be implemented in federal CDP reform in the future.

However, the decision to close activities was made outside of the impacted cohort’s realm of influence, and many people were upset and frustrated with the immediate cancelling of their work, from which they personally get much more than just a ‘tick box’ for their welfare cheque. This can only be seen as a positive thing for some elements of the model, as it illustrates that people do get other essential things from having CDP work every day, such as mental stimulation, social interaction and a sense of purpose.

The results of the COVID-19 changes to CDP are evidence that the scheme need not be so heavy-handed with its financially punitive actions should participants not attend uniformly, and could in fact focus on other areas such as supporting people to register on the system, and ensuring that activities are beneficial to participants and the community.

The ‘stay at home’ message, including the closure of CDP activities and some workplaces, has meant that already excessively overcrowded houses (often with ten to twenty people per house) are fuller more of the time. This is ironic given that this situation has come about as an initiative to try to enforce social distancing. Again, it reminds us of how these decisions are made a long way from the realities of remote overcrowded NT communities, and how social distancing at home is a privilege not all in Australia can afford.

The extreme national and international reaction to COVID-19 has revealed what we can achieve when we decide that a health crisis is a priority. It is, however, a sad reminder for remote communities that suffer from illnesses that we already have a cure for, such as rheumatic heart disease and skin diseases such as scabies. We seem to lack the political will to address their situation.

Maningrida made headlines in 2018 for its heartbreakingly high rate of rheumatic heart disease, an illness that kills a disproportionate number of people prematurely. Australia has one of the world’s highest rates of rheumatic heart disease, with Aboriginal people nearly twenty times more likely to die from it than their non-Aboriginal counterparts. According to the Menzies School of Health, the rate of rheumatic heart disease ‘falls dramatically with improved living conditions and increased hygiene standards’. It is often called a ‘disease of poverty’, with evidence pointing clearly to overcrowded houses as a significant contributing factor. While the political hot potato that is remote housing continues to be juggled around bureaucrats’ offices and parliamentary debates, people in Maningrida go on living on top of each other every single day in deplorable situations. Their lives do not command the flurry of immediate and urgent national action that COVID-19 received.

In addition to the closure of workplaces and the cessation of CDP activities, the government decision to close all public pools was a broad-brush approach that could have negative repercussions. Research highlights the significance of swimming pools as a preventor of numerous skin illnesses that disproportionately affect remote communities. While, understandably, everybody must follow national regulations, various people in Maningrida have expressed concern to see this facility, which keeps a wave of skin illness at bay, shut.

A final decision made a long way from the realities of Arnhem Land was the temporary closure of schools in favour of online learning. A recent SBS article highlights the challenges of home schooling for migrant or refugee families in Australia, but this concern should be extended to include Aboriginal students who live in remote areas, where the notion of a private learning space complete with laptop and internet access is ludicrous. The school-closure decision further reflects the gap in understanding of the experience of remote-living Aboriginal families and students.

While the Australian and Northern Territory governments have both emerged with relatively flying colours in regard to their overall COVID-19 crisis management, as have the local Aboriginal corporations, land councils and regional shires, the forgotten corners of Australia contain a wealth of untold stories and experiences that we could learn from. Instead, the stories from remote communities remain by and large untold, and the gap between Canberra and beyond feels slightly wider than before.

Ingrid Johanson has a master’s degree in human rights law and a bachelor’s degree in international development, and has worked in India, Chile and New York. Since 2013, she has worked with remote Indigenous communities in the Northern Territory. She currently resides in Maningrida, Arnhem Land.