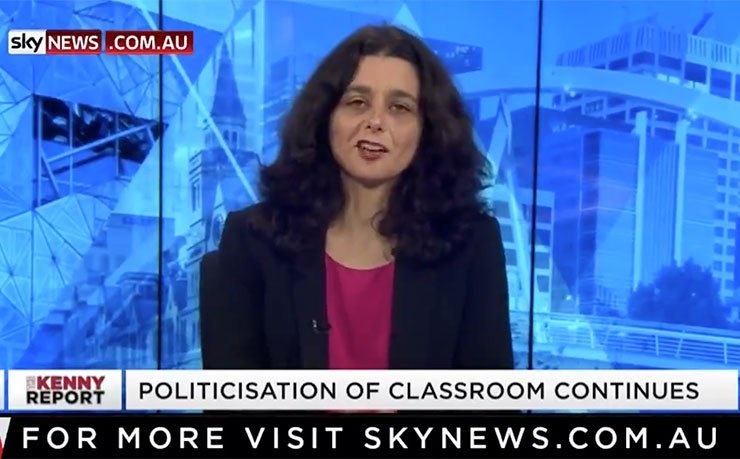 You…see white homeless men on the street and that completely debunks [white-privilege theory].

Who or what is the Institute of Public Affairs—‘A feudalistic patriarchy, a trompe l’oeil of birds and flowers hiding a hardhead pile-driving agenda’, as journalist Elizabeth Farrelly has it? ‘The voice for freedom’, ‘An independent, non-profit…think tank, dedicated to…economic and political freedom’, as the IPA describes itself? Both, perhaps? No, its much-touted ‘freedom’ is widely recognised as being reserved for business, and the bigger the better. Clearly, it doesn’t matter to the IPA that untrammelled freedom for business inevitably curtails freedom for the rest.

‘Big business created the IPA’, says the group’s current executive director, John Roskam. In 1943, several prominent businessmen, reportedly prompted by the collapse of the right-wing United Australia Party, formed the IPA with the goal of influencing Australia’s post-war reconstruction in favour of business rather than labour. Key among the policies of today’s IPA are limited government, free markets, privatisation and deregulation, including the abolition of the minimum wage. As well, and no doubt influenced by its many lucrative fossil-fuel-company donors, the IPA denies the anthropogenic factor in climate change.

Among the IPA’s most generous donors is mining magnate Gina Rinehart, whose company reportedly provided more than a third of the IPA’s total income for 2016 and 2017. Other donors include ExxonMobil, Caltex, Shell, Esso, Telstra, Philip Morris and British American Tobacco. In the 1990s, tobacco companies funded IPA research designed to attack the science behind passive smoking.

This year will see the opening of the Liberal-aligned Robert Menzies Institute at the University of Melbourne. The institute’s board members include IPA chairman Geoffrey Hone and right-wing commentator Peta Credlin. The Morrison government has contributed $7 million of the $7.5 million in funding to date.

There is no doubt that the ‘hardhead pile-driving agenda’ of today’s IPA is radical neoliberalism. Several scholars describe the IPA’s ideological move in the late 1970s away from Keynesian economics towards neoliberalism, in line with similar shifts in the United Kingdom and United States. With the IPA’s help, says Damien Cahill, Australian finance, mining and monopoly capital neoliberalised the Australian state and economy.

As to its beguiling trompe l’oeil, the IPA’s florid displays of comforting Western cultural motifs  serve to divert the public eye from a dark neoliberal underbelly.

The ‘research’ of Bella d’Abrera

I don’t know if [climate activists] are saying the world is hotting up or cooling down at the moment, whatever it is.

The work of IPA’s researcher Bella d’Abrera takes us further into the IPA’s agenda, as she is the director of the IPA’s Foundations of Western Civilisation Program. Although much has been written about the IPA, d’Abrera and her program are less familiar.

The Foundations of Western Civilisation Program, according to the IPA website, was established in 2011 ‘to defend and extend Australians’ understanding of the influential, historical role of the West in…our society’. As program director, d’Abrera spends much of her time advocating for the IPA’s education policies, mainly in the form of lavish reports to institutions and near-daily interviews, presentations and opinion pieces for right-wing media outlets. D’Abrera is all over the internet, particularly Sky News. ‘The internet is a powerful tool’, she says, ‘which, in the right hands, can be employed for the glory of God’. More on that shortly.

Several of d’Abrera’s glossy reports include data analyses of participant responses to brazenly biased agree/disagree-type questions—for example, ‘School students should be forced to apologise for their skin colour’; ‘Schools should make boys ashamed of being male’. D’Abrera, without the merest blush, declares the results: for example, 86 per cent of Australians do not want boys made to feel ashamed of being male. Among d’Abrera’s pet hates, including climate activism and un-Christian behaviour three bêtes noires stand out, namely, the notions of class, race and gender, which she views as apparitions of a fevered Marxist imagination. For her, they simply do not exist: ‘That we have a racism problem…is all complete lies. [Australia] is clearly not a racist country… It does not discriminate against you depending on your race or your gender’. Against all the evidence, Australia, according to d’Abrera, is free of racist, sexist and gender-related prejudice.

A major part of d’Abrera’s role is to reassure her audience that claims about Australian bigotry are woke-ish lies,  a deception carried out by humanities and social science departments in the universities. After surveying, for example, several hundred handbook entries for history subjects, d’Abrera concludes: ‘The left-wing leitmotifs of class, race, and gender have replaced the essential core subjects [in] the history of Western Civilisation’. Hence, she says, Western civilisation is reduced to ‘not much more than a story of white male patriarchy wielding power over and oppressing women, racial minorities and the poor’. The IPA’s Foundations of Western Civilisation Program declares:

‘The ancient Greek and Roman Empires and Medieval Christian Europe…produced…enduring achievements [that] have not been matched by any other civilisation,’ so presumably an IPA-approved history course would take a hierarchical view of cultural achievements and encourage students to uncritically place those of Western civilisation at the apex.

And, if you thought the so-called ‘history wars’ were history, I’m sorry to disappoint. They might be a rerun of the 2018 recap of the 2014 rehash of the 2000s’ replay of the 1990s’ war against the 1960s’ invention of ‘new history’, which opened up the field of historical subjects to people who were not white or male or landowners, but they continue in outpourings on Sky and sister media about ‘Marxist’ history departments. Who or what might be ‘Marxist’ in their terms is never seriously examined. The epithet is merely a slur.

But let’s return to d’Abrera’s  role within the IPA and ask just what her ideological agenda is. It might be noted that Roman Catholic values and neoliberalism cohabit in her work. What then of her scholarly bona fides in relation to her educational brief, and  what has been the effectiveness of her campaign to influence Australian education policy?

On the first question, noted scholars in the field are scathing. ‘D’Abrera’s take on 19th-century Britain’, says 19th-century specialist Joanne Wilkes, ‘is completely clueless’. D’Abrera, says historian Christopher Hilliard, ‘doesn’t seem to recognise the history of Western civilisation when she sees it’.

‘It cannot be plausibly argued’, says Dirk Moses, ‘as d’Abrera does, that BA enrolments have declined because of a Marxist curriculum dominated by class, race, and gender themes’.  Sidestepping the ridicule thrown at her, however, like Joan of Arc d’Abrera soldiers on.

What might we infer from the scholarly criticism? First, does d’Abrera have the credentials to back up her claims? She holds a doctorate in European history (albeit there are no refereed papers), which is a good start. But why the myriad claims against academia, among them:

‘Our entire Christian heritage is…erased from our history’;

‘Today’s academics mostly believe there is nothing we can learn from the 2500 years of accumulated wisdom and knowledge passed down to us’;

‘Historians have embraced Marx’s template and applied it…re-writing the past from the point of view of class, gender, and race…[replacing] the traditional canon of historical subjects’.

D’Abrera’s survey of history subjects, says Hilliard, is ‘badly inaccurate’: ‘As she looked over the lists of history classes on offer, d’Abrera must have skipped over the units on the history of human rights and European traditions, the natural law tradition and free speech… She likewise glosses over the ones on the French Revolution and Tudor-Stuart England’Why does d’Abrera’s report skim over myriad history units unmistakeably bang on topic?

Perhaps it’s her dualistic lens. Perhaps her commitment to a Manichaean good-versus-evil outlook obscures what is right in front of her. When d’Abrera peruses subject lists, perhaps she can’t believe what she is seeing—actual history subjects—so instead she sees what she already believes is there, namely, Marxist propaganda.

What is it that she believes in, then? Here is d’Abrera’s ideological position clearly stated: her struggle to save Western civilisation is a holy crusade against Satan:

‘I believe it is a spiritual battle, and the Devil can’t win. It’s that simple. Christ will win and he’s going to be victorious and I’m on his side’.

Indeed God himself has called d’Abrera to fight: ‘We should be…fighting…that’s why I’ve been created, that’s my job… I’ve got to do it otherwise when I meet my Creator and he goes, “Look, I gave you those talents and you didn’t defend me”, I want to be able to say I did my best’.

Clearly, d’Abrera’s Manichaean version of Catholicism skews her view of history and the world. Similarly, it skews her view of the current draft national curriculum, which she also long and loudly opposes as ‘hostile to Christianity’. D’Abrera owns her religious views as entirely personal; and there is no suggestion that the IPA endorses them.

D’Abrera relates her religious views to those of her father, Bernard: ‘my father always told me despair is one of the tools the Devil will use on you, and you have to just resist that’. Interestingly,  Bernard d’Abrera was an avowed creationist, and, like his daughter, known for his amateurish views. An apparently gifted photographer, Bernard self-published photographic books on butterflies. His accompanying commentaries, however, were derided by lepidopterists as anti-science. Entomologist Arthur Shapiro described d’Abrera’s work as ‘peppered with anti-evolutionary flapdoodle’.

Bella d’Abrera seems genuinely distressed about what she sees as the imminent collapse of the Western tradition, which she appears to conflate largely with Christendom. But the problem is expressed in the shallowest terms: ‘We’ve rejected Christianity and we’ve invented a new religion in its place, which is wokeism…and therefore teaching Christianity again is too much of a threat to the new religion’. Wokeism, says d’Abrera, ‘has demonised what we know to be good and true, the idea…of truth…of family… It’s demonised everything which keeps society… functioning as best as it can given our…lack of perfection’. Resist despair, however, says d’Abrera, ‘that’s the Devil telling you that he’s won’. ‘Christ will win, his victory is guaranteed… It is a battle for the soul of civilisation at the moment’.

All the same, even if pigs flew and Christian orthodoxy regained some of its once-upon-a-time medieval hold on the university, today that orthodoxy would be merely a hollow neoliberal imitation. Over the past half century, neoliberalism has all but erased the potential for the survival of any value other than that promoted by  the capitalist market—an amoral competitive individualism and a consumer culture that have undone the family and community that d’Abrera celebrates. D’Abrera’s Christian code of ethics has long been under attack, but not from woke-ish Marxists holed up in the universities.

Like a liturgical mantle,  d’Abrera’s Christian values and the IPA’s vociferous defence of a tradition under attack deflect attention from the neoliberal reality ushered in with the backing of just such think tanks as the IPA. As a  conservative Christian soldier, d’Abrera pins IPA neoliberal education policy to a particular ancient Greco-Roman and Christian past Whether educational policymakers or observers are taking any notice remains to be seen.

Reason, rationality, calculation and measurement need to be transformed by empathy, compassion, imagination, dialogue, creativity and importantly the questioning of authority and power.

A L JONES, PhD, is a psychologist, writer and educator with academic specialities in educational and gender psychology. Jones is a series editor at Lexington Books and taught for fifteen years as a university lecturer. Twitter & Blog

More articles by A L Jones