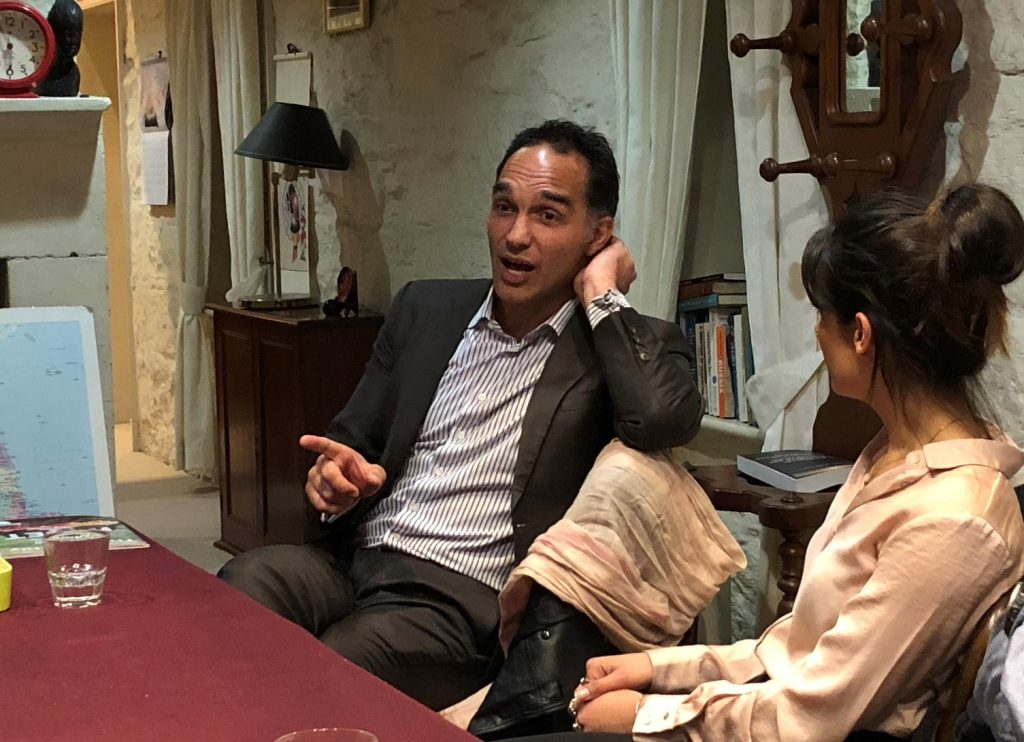 John Garnaut has risen from Fairfax journalist to influential security adviser to Malcolm Turnbull’s Coalition government and now consultant with a global client base. He worked as a senior adviser on Turnbull’s personal staff and then in his department from November 2015 to June 2017. His CV says he ‘led the Government’s analysis and policy response to authoritarian interference’. Perversely, Australia has new espionage laws that expose journalists to a 20-year jail sentence if they damage relations with a foreign country. The unofficial exceptions are those who receive sanctioned leaks from intelligence and security officials and politicians.

The consultancy firm for which Garnaut now works, McGrathNicol, boasts that he provides foreign-interference and espionage-risk reviews to multinational corporations, universities, financial institutions, government agencies and hedge funds. The Sydney, Monash, NSW and Queensland universities have hired him to advise on how to ‘detect and manage foreign interference and espionage risks’. McGrathNicol won’t say how much the universities paid for these reviews. Some scholars worry that his appointment is incompatible with academic freedom. As shown below, they have reason to be concerned about Garnaut’s novel approach to accuracy.

Although Garnaut no longer works full time in journalism, it remains instructive to examine an article he wrote for The Sydney Morning Herald and The Age on 16 October 2015 called ‘Are Chau Chak Wing’s circles of influence in Australia-China built on hot air?’ Chau, a wealthy Chinese-born Australian, sued Fairfax and Garnaut for defamation in the Federal Court. As a journalist, I’m not a great fan of the defamation laws. However, accuracy is not only crucial to good journalism but offers the best defence in a defamation action.

Justice Michael Wigney was the presiding judge in this case. His reasons for judgment were released on 22 February 2019. The court summary said the article described Chau’s supposed connection with an ‘unfolding international bribery scandal’. The so-called scandal had resulted in charges being filed in the United States against several people, including the alleged recipient of the bribes, the then president of the UN General Assembly, John Ashe. Chau was not charged. The summary said the article linked the bribery allegations with Chau’s political and other donations in Australia.

Garnaut published his article the day after Sydney’s Daily Telegraph had written on 15 October 2015 about the US bribery charges and Chau. During the defamation hearing, the Sydney Morning Herald reported on 12 June 2018 that Chau’s barrister told the court that early on 16 October 2015 Garnaut sent an email to his Daily Telegraph rival Michael Sainsbury, saying, ‘This must be about the most rewarding story the motherland has ever given us. I LOVE IT’. In his judgment Wigney noted that Garnaut had said in evidence, ‘I’ve never taken any glee in hurting somebody’s reputation’.

Delivering his judgment on 22 February 2019, Wigney awarded Chau $280,000 in damages plus legal costs. Chau said he would give the money to veterans’ charities. Unless otherwise noted, what follows is from Wigney’s reasons for judgment. The judgment is being appealed.

Wigney said Garnaut emailed his Daily Telegraph rival asking: ‘How do we know for sure Dr C is being investigated?’. His rival replied, ‘Fuck, they were supposed to cut that bit’. Wigney said, ‘The journalist who had broken the story had given a fairly clear indication that…there might be some issues with substantiating any claim that Dr Chau was in fact being investigated’. Wigney said Garnaut appeared to have missed that point in his subsequent article.

Wigney continued that for the most part Garnaut presented as an honest and reliable witness, but at times he gave ‘inappropriately dismissive’ answers to questions that tended to impugn the article. The judge said, ‘I have serious doubts about the honesty and reliability of at least one aspect of Mr Garnaut’s evidence concerning a supposed confidential source of information… The likelihood is that Mr Garnaut’s evidence concerning that source was manufactured …’ (The judge devoted nine pages to this issue.)

Wigney said the genesis of Garnaut’s article was a sealed complaint filed on behalf of the FBI and approved by assistant US attorneys in New York. Some persons were only identified as CC1, CC2 and CC3. Wigney said Garnaut’s evidence was that he had read and considered the complaint, which is a very detailed 37-page documentcontaining five counts, or charges, under US law. Wigney said, ‘Upon careful reading it provides precious little support for any of the imputations conveyed by the article… It would appear to be tolerably clear that Mr Garnaut did not seek to ascertain exactly why, if CC3 was indeed Dr Chau, and Dr Chau was a co-conspirator, he had not been charged or even named in the Complaint. He did not even attempt to contact the Department of Justice’. The judge subsequently said the article appeared online just under seven hours after ‘Mr Garnaut commenced work in earnest on the proposed “big hit” on Dr Chau…[which] was investigated and drafted at what appears to have been breakneck pace’.

An initial source for Garnaut’s article was a former Canberra official, Roger Uren, the husband of Sheri Yan, one of those charged over the bribes allegedly received by John Ashe. Wigney said Garnaut said he had a telephone conversation with Uren early on the morning of 16 October 2015, during which Uren told him that Chau ‘paid $200,000 to John Ashe as a speaking fee. He said he didn’t think it was a bribe’. The judge said that, according to Mr Garnaut, this information caused him to believe that ‘there was no doubt in Roger Uren’s mind that Chau was personally the source of these bribes and the invitation [to speak]’. Wigney said Garnaut’s article did not include Uren’s statement that he believed the payment was a speaking fee and not a bribe, although, ‘The statement would have tended to be exculpatory, not only of Ms Yan, but also of Dr Chau’.

Garnaut tried to get Chau’s side of the story by phoning and emailing one of his assistants, Jim Zheng, who worked in Sydney. The judge says some of what Mr Garnaut told Mr Zheng was not accurate:‘There was no UN bribery investigation. It was an FBI investigation… The assertion that Dr Chau had been “accused of bribing John Ashe via Sheri Yan” was also incorrect’.

Shortly before his article was published, Garnaut rang Chau’s daughter Winkie Chow. There is no evidence they had spoken before. In cross-examination, Garnaut said that during his conversation with Ms Chow, he said, ‘There is this UN bribery investigation… I understand that your father is CC3 in this document’. Ms Chow told the court that Garnaut called her ‘out of the blue’ while she was in a car. She told him she was on holiday and had no idea ‘of what’s going on’.

Wigney said Ms Chow’s apparent inability to provide any meaningful immediate response to his assertions or queries appeared to confirm Mr Garnaut’s view that ‘Dr Chau had indeed bribed Mr Ashe. Wigney said that in an email on 15 October 2015, Garnaut said in reference to Chau, ‘Spoke with Winkie… He’s fucked’. Wigney said, ‘It was particularly unreasonable for Mr Garnaut to expect Ms Chow to provide any meaningful response to his assertion that Dr Chau was CC3… Mr Garnaut had no reason to believe that Ms Chow would necessarily have read and understood the Complaint [about bribery]. Ms Chow’s evidence was that she had not read it. Mr Garnaut did not ask Ms Chow whether she had’.

Under a later section headed, ‘Mr Garnaut’s belief and intentions in relation to the imputations’, Wigney summarised issues he had discussed in more detail earlier and concluded that Garnaut’s claim that he took reasonable steps to ensure that nothing beyond suspicion was conveyed in his article ‘was and is wholly without substance and is rejected’.

Postscript: Fairfax (now majority owned by Nine Entertainment) made a joint program on Chau with the ABC on 2 June 2017. Chau again sued for defamation, this time with Justice Stephen Rares presiding. Rares found that the allegations in the program were ‘seriously defamatory’ and awarded damages of $590,000 plus costs. Neither Nine nor the ABC is appealing.

Brian Toohey is the author of Secret: The Making of Australia’s Security State.