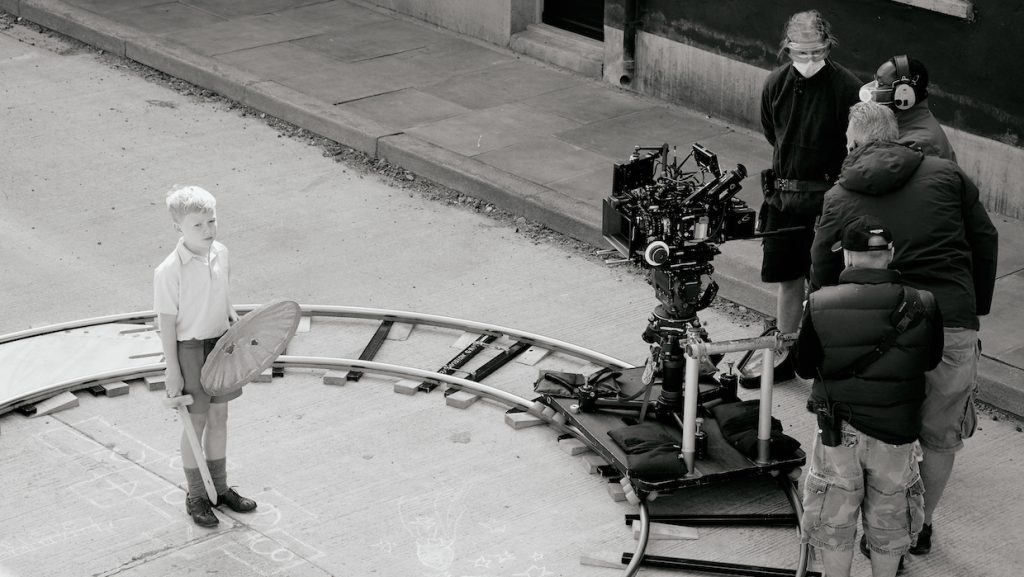 Kenneth Branagh’s Belfast opens to the soundtrack of Van Morrison’s ‘Coming Down to Joy’ as panning shots move over the docks, streets and monuments of Northern Ireland’s capital city. As Morrison’s singing fades, the coloured frames of the present day fade to monochrome and the focus narrows to a single street of terraced houses. It is 15 August 1969.

The camera descends slowly to children playing, kicking footballs and brandishing metal dustbin lids as shields. Nine-year-old Buddy (wide-eyed newcomer Jude Hall) is being called to come home for his tea, his mother’s cry passed on by neighbours standing in their open doorways, chatting on street corners, and passing by on bicycles. Buddy is recognised and greeted by everyone he encounters.

His rambling progress home is brought to an abrupt end. The camera circles around him as he stands transfixed while a mob charges down the street, headed straight towards him. His frantic mother (a luminous Caitriona Balfe) rushes towards him and seizes a dustbin lid for protection as bricks and paving stones are hurled through the air. Windows are shattered and petrol bombs engulf the houses of Catholics in flames. Their distraught mother shoves Buddy and his elder brother Will under the kitchen table in the their comparatively safe Protestant home as general mayhem descends. The Troubles—the conflict between Republican Catholics and Protestant Loyalists over the future of Northern Ireland—have ruptured the safety of what was the children’s playground.

Belfast combines memory, history and nostalgia, a heady mix. Branagh manages this complicated terrain by limiting the scope of the film’s reckoning with the past to Buddy’s comprehension of events. As a result, much of the pleasure to be gained from the film is the effect of Buddy’s perspective. We are invited into the world of a child, and a child’s way of being in that world. Engaging with Buddy’s perspective, we see double as his world unfolds within an adult one to which he responds with varying degrees of understanding. It’s an imaginative and carefully calibrated exercise that treats the child’s world of 1969 and the audience of the present day with equal seriousness.

Unionist paramilitaries who want to ‘cleanse’ the area of Catholics erect barriers at the end of the street. Buddy asks his father Pa (an excellent Jamie Dornan) whose side they’re on. Briefly back from his work in England as a carpenter, Pa replies that ‘there’s no our side and their side on our street’. Off screen we hear him mutter that he’s got nothing against Catholics but that theirs is religion of fear. The camera then cuts to the sweating face of a firebrand Protestant minister who delivers a gruesome description of the agonising death that will befall his congregants unless they choose the right path. Wide-eyed Buddy makes a drawing of a forking road at home, labelling one fork good and the other bad. But which is which?

He listens with interest to an older cousin who is giving advice on how to tell a Catholic from a Protestant. She thinks you can tell them apart by their given names, a theory that comes to grief with Thomas, a name that puzzlingly turns out to be a wild card. Telling Buddy what to say if a stranger asks about his religion, she recommends double bluffing. ‘Say you are a Protestant’, she says. ‘But I am’, Buddy replies, flummoxed by the entire conversation.

Buddy’s in love with Catherine, a girl in his class. But she won’t talk to him. It’s a problem that Buddy takes to his grandfather, Pop (Ciarán Hinds in one of his most memorable performances). The portrait of Pop is one of the most powerful in the film; he speaks with the voice of reason and poetry, as well as helping Buddy with his homework. Advising on long division, he suggests that less clarity in writing numbers can be useful. It will give Buddy the ‘benefit of the doubt’. Buddy wonders if that’s cheating. ‘No’, says Pop, ‘I’d call that spread betting’.

Given to dispensing advice while seated in the outside lavatory drinking a cup of tea, Pop muses that women are very mysterious. ‘A pity beyond all telling is hid in the heart of love’, he tells his grandson. It’s a point that they will return to on a later visit that sees Buddy seated on the sofa between his grandparents, both of whom are reading newspapers. He still hasn’t got any further with the girl.

Talking once more about the mysteriousness of women, Buddy’s Pop slips into the song ‘How to Handle a Woman’ from Camelot and, getting up, takes his wife’s hand. Judi Dench’s wonderful Granny, grey-haired and wrinkled, tells her husband to ‘Get off me’ as she chuckles and whirls in his arms in a performance that is a match for Hinds’s. Pa’s unaccompanied singing and his wife’s feigned unwillingness create the most powerfully resonant moment in the film.

The resonance that ‘brings back the past’ might be dipping a madeleine in a tisane, as with Proust, or it might be hearing a song. In 1710, Theodore Zwinger reported that Swiss soldiers were so overcome with homesickness—then called nostalgia—that when they heard a well-known tune from their homeland they became ill with ailments so dire they were quite unable to fulfil their duties. Belfast is full of resonant song, much of it by the Northern Irish singer-songwriter Van Morrison, whose work is complemented by a couple of songs from Tex Ritter and a marvellous turn by Jamie Dornan, who sings ‘Everlasting Love’ with gusto at his father’s wake. Songs, the pictures (especially westerns), television (Star Trek in particular), comics and newspapers punctuate the lives of Buddy and his family.

Despite the limitations of a child’s understanding, the complicated relationship between history and memory is played out in Belfast through a narrative that engages with historical events directly, in snatches of television interviews often playing unwatched in the sitting rooms of Buddy’s and his grandparents’ houses. There’s a nice moment in which Harold Wilson, then Prime Minister, is asked by Robin Day, a famously acerbic interviewer, whether he (Wilson) plans to ‘intervene and use the authority which is yours either to redress grievances or to ensure order’. Wilson replies solemnly that ‘If that should become necessary of course I shouldn’t shrink from doing whatever was needed. We have been deeply concerned about the problems of civil rights in Northern Ireland’. Soon snatches of newsreel will show troops, tanks and armoured vehicles appearing on the streets of Belfast.

In spite of turmoil in the streets, Buddy’s world is experienced as secure, loving, and safe. It’s what he knows as he sits beaming while his grandparents dance, it’s what he understands when people call out to him in the street, and it’s what he feels at home. Buddy’s Belfast is full of cousins, aunts and uncles and friends dropping in and out of each other’s houses—a place where people who know each other also, as his mother says, look out for each other.

While the Troubles remain in the background of Buddy’s story, their impact upon him, and the adults around him, is unmistakable. A Unionist mob plans to loot a local supermarket, and an older friend drags Buddy along even as he protests. By the time he arrives, the disarray is already great and Buddy, pressed by his friend to take something, picks up a box of detergent fallen on the floor. When he gets home, full of innocent excitement, he tells his horrified mother where he came by it. When she tells him he must take it back, he gazes in astonishment: ‘But it’s biological’, he says. Insisting that he return it, Ma and Buddy find themselves caught up in the turmoil, which now includes British soldiers and armoured vehicles. As the mob withdraws, Buddy and Ma are used as human shields, a guarantee of safe passage for the Unionist leader, Billy Canton (Colin Morgan). When Pa appears on the scene and disarms Canton, who happens to be one of his old school friends, their confrontation is played out to the soundtrack of Tex Ritter’s version of the theme song from High Noon. It’s a moment in which Buddy’s imagination, which turns to the famed confrontation between Kane and Miller in High Noon, blends with the event he witnesses.

One of the major themes in the film, rendered minor by a child’s perspective, is what it means to be Northern Irish—a political identity that in turn forms part of a personal one. Pa’s refusal to join the paramilitary group led by Billy Clanton or to support it financially has already put him in a dangerous position. Clanton tells him that ‘You are either with us or against us’. Pop then tells his son that he must leave: ‘You’ve no choice. You know they’re going to come for you, don’t you? And this time they’re going to send someone serious. Get yourself to the moon. London’s only a small step for a man’.

As Buddy’s mother contemplates their move to England, her primary concern is loss of community, of knowing and being known. She’s afraid no one will understand her, and what’s more, she fears that the family will not be welcomed simply because they are Irish. She talks to a friend about the imminent possibility of going—there’s a full time job for Buddy’s father, and a house, if they will commit. There’s a wealth of Irish history in the friend’s reply: ‘The Irish are born for leaving’, she says.

The lost world that Branagh brings to life in Belfast cannot be regained, except in his imaginative performance of it, created in dialogue with history and identity. One of Buddy’s concerns echoes his mother’s: he fears that no one will understand him. Pop assures him that Buddy will always know who he is, an identity Pop locates within both a specific location—Belfast 15—and a family who, Pop says, are always looking out for you. It’s a narrative of origin perfectly suited to nostalgic remembrance.

Valerie Krips taught at the University of Melbourne and Deakin University before moving to the English Department of the University of Pittsburgh, where she was chair of the interdisciplinary Children’s Literature program. She also taught in the department’s graduate program, Critical and Cultural Studies, and has been a consultant for a variety of heritage projects. She was a co-editor of Arena Magazine and is Associate Editor (poetry) for Arena (third series).