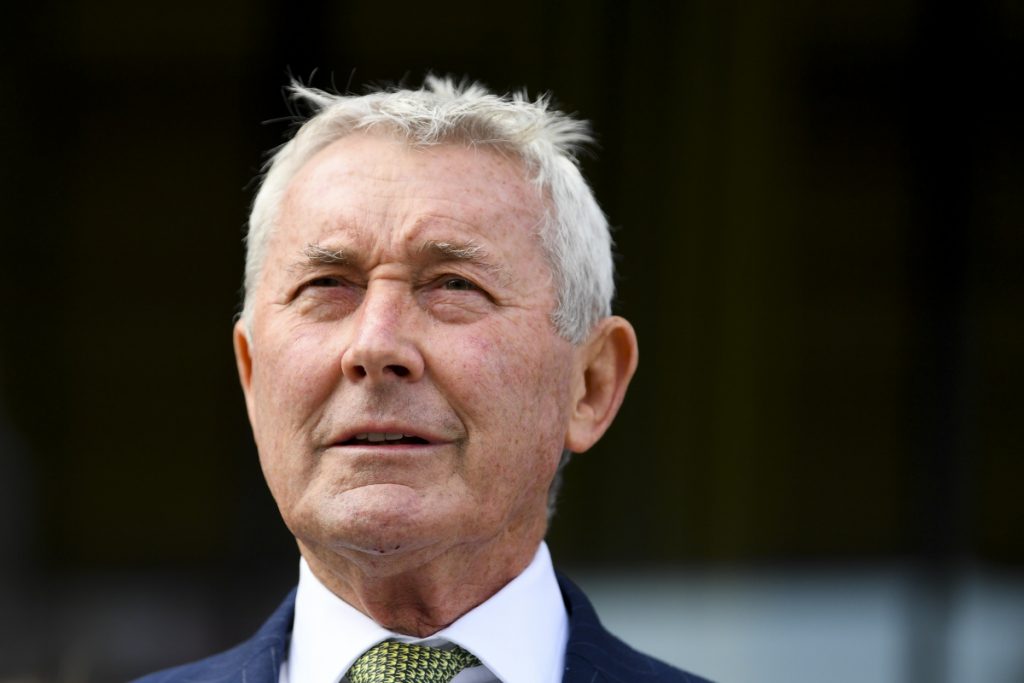 In writing about the prosecution and persecution of former Australian spy Witness K, law academic Spencer Zifcak saw an ‘Alice in Wonderland quality about all this’ (Kafka would have been more appropriate): the defendants in a criminal case were those who ‘acted in the national interest by disclosing alleged unlawful activity by Australia’s intelligence service’. The prosecutors were those who initiated the covert operation.

Let us go back to times dark and manipulative. A new country struggling in the aftermath of Indonesian military occupation is in dire need of income. There are immediate oil and gas options in the Timor Sea. Australia, supposedly a friendly state, having assisted the territory’s transition from Indonesian stomping ground to sovereign nation, is willing to negotiate about how best to divvy up the oil and gas reserves in the Timor Sea between Timor-Leste and Australia.

In the first decade of the new millennium, though, it became clear that Canberra had little interest in being friendly. In 2004, Australia’s then foreign minister, Alexander Downer, authorised the bugging of the cabinet offices of Timor-Leste by officers of the Australian Secret Intelligence Service (ASIS). The surveillance of Timor-Leste’s negotiators was an act of economic espionage. The Australian government, in privateering fashion, hoped to gain the upper hand in discussions between the countries over their maritime boundary. Oblivious to the surveillance operation, the East Timorese went on to sign the Treaty on Certain Maritime Arrangements in the Timor Sea, which distinctly favoured Australia by placing a 50-year moratorium on the negotiation of maritime boundaries. This left both countries to conduct what was intended to be joint exploitation of the Greater Sunrise fields, while leaving 79.9 per cent of the area under Australian jurisdiction.

When the operation was revealed, former US ambassador to Croatia Peter Galbraith, who was the chief negotiator on behalf of the Timor-Leste government, was stunned by Canberra’s predation: ‘The whole experience of the negotiation from 2000 on and through this whole episode was to see a country that, yes, in many ways focuses on the public good—but where corporate greed was a big part of it, because the Howard and Downer government, they were shills for the corporations’.

Galbraith’s evaluation was not relevant to just that period. In the early 1960s the Australian government had issued petroleum permits to energy company  Woodside that allowed it to delve into the Timor Sea. The hunger of Australian interests was developed enough to lead Australia to snub Portugal in favour of Indonesia in the early 1970s. Times were changing, and power interests, however bloody, were realigning.

Canberra was operating in a manner reminiscent of US Marine Corps general Smedley Butler’s frank description of his role in protecting US financial interests. During his time in active military service, Butler served as ‘a high class muscle-man for Big Business, for Wall Street and for the Bankers. In short, I was a racketeer, a gangster for capitalism’. The ASIS bugging operation was as much for the Australian government as it was a gangsterish effort for Woodside, deemed by Georgia Wilkins and Bernard Keane of Crikey ‘a symbiont…deeply attached to the Australian government’, sharing staff, resources and national security details.

Lawyer Bernard Collaery, who acted for Witness K and is also the subject of prosecution, is even more candid in his assessment, remarking in an interview last year that Australian foreign policy is now very much in step with the ‘American model’: ‘Boardrooms have outflanked the role of diplomacy. It’s now the boardroom to Prime Minister, boardroom to the treasurer. The way [our foreign policy] is now has no relation to a working democracy. It’s privileged decision making. It’s imperialism’.

Witness K’s role here is pivotal, moral, and disruptive to Australia’s soiling role in East Timor’s relations. As the former head of technical operations at ASIS, Witness K found discontent in the agency. The revolving door of government and greased corporate ties—Downer, for one, had moved into a consultancy role for Woodside—convinced him that something was rotten.

Exercised by the nature of the 2004 intelligence operation, Witness K made an internal compliant to the Inspector-General of Intelligence and Security (IGIS). It did not get him far; Witness K’s employment was eventually terminated. Having sought permission from the IGIS, Witness K secured the services of an ASIS-approved lawyer and former ACT attorney-general, Collaery. Collaery went to work and came to the conclusion that the espionage operation was probably unlawful. It might even count as a conspiracy to defraud the government of Timor-Leste under section 334 of the Criminal Code.

Timor-Leste capitalised on the incident, taking the matter to the Permanent Court of Arbitration in The Hague. This had a clear intention: negating and ultimately renegotiating the original agreement, which had not been arrived at ‘in good faith’. In 2013, aided by Collaery’s efforts, an invitation was extended to Witness K to give evidence. Disclosures regarding the surveillance operation, which had been executed under the guise of an Australian aid program, were made in two affidavits. Alarmed, Australia’s attorney-general, George Brandis, sprang into action. Witness K’s passport was cancelled. The domestic intelligence service, ASIO, raided the homes of both Collaery and Witness K.

Brandis flirted with prosecuting both Witness K and Collaery, being first asked in September 2015 by the Commonwealth Director of Public Prosecutions (CDPP) for consent. Despite receiving advice from two different DPPs and the solicitor-general over the next two years and three months, Brandis dithered. His appointment as Australian High Commissioner to London left the matter in the hands of the succeeding attorney-general, Christian Porter.

In May 2018, some six months after he assumed office, Porter took the issue up, giving consent to the CDPP to formally bring charges under section 39 of the Intelligence Services Act 2001 (Cth) against both Witness K and Collaery. The provision criminalises the communication of any information or matter acquired or prepared by or on behalf of ASIS in connection with its functions or relates to its performance.

This would not have been known to most Australians but for the revelation of Independent MP Andrew Wilkie, who insisted that Australia was creating what was, effectively, a class of political prisoners. ‘The bottom line is that the spying on East Timor was indeed illegal and unscrupulous’, stated Wilkie to the House of Representatives in 2018. ‘Although it was the Howard government’s initiative, the crime has subsequently been covered up by all governments since.’ He was also of the view that the reluctance of Brandis to pursue the matter, and Porter’s enthusiasm to do so ‘really makes it clear to everyone that this is an intensely political decision in an intensely political environment’.

In 2019, Witness K made murmurings that he would be pleading guilty. But it was not till 17 June 2021, concealed behind a wall of solemn black panels in an inglorious affront to justice, that the ACT Magistrates Court entered his plea of guilt. The next day, Magistrate Glenn Theakston concluded that the former agent would bear the burden of a 12-month good behaviour bond and face a three-month suspended sentence. ‘It cannot and should not be up to…former staff members to unilaterally depart from those security obligations’, declared Theakston. This ‘express’ and ‘deliberate’ act had compromised the agency’s effectiveness, safety and security. It even jeopardised Australia’s relationships and reputation.

There was almost no room for Witness K to make a defence—the proscriptions regarding ASIS were ‘strict and absolute’, though the magistrate did note that Witness K had been altruistically motivated by a sense of justice. In an observation that must surely go down as one of the more ironic ones made in an Australian court, the former agent’s disclosures were part of an effort to participate in a ‘rules-based order of international relations’. The implication for Canberra’s own lawless conduct in this matter is easy to draw.

To the last, the prosecution were hoping to make an example of their quarry. The CDPP’s Richard Maidment, QC, took issue with Witness K’s efforts to secure a non-conviction order. A conviction was necessary to deter people from making such disclosures of information in future, irrespective of any altruistic goal. Whether it was ‘appropriate for him to breach the obligations, which had been brought to his attention many times, does not afford him mitigation’.

This travesty, and the ongoing prosecution of Collaery, do much to show up the woefully inadequate state of whistleblowing and public disclosure laws in this country. Even the Public Interest Disclosure Act 2013 (Cth) would not protect such individuals as Witness K. Section 33 expressly carves out intelligence agencies from the disclosure regime. ‘Disclosable conduct’ does not cover conduct by agencies engaged in the proper performance or proper exercise of their powers, or members engaged in the purpose of the proper performance of such functions or proper exercise of agency powers. There was certainly nothing proper about the intelligence operation against Timor-Leste, but hard-boiled practitioners would simply point out that they were doing what their masters had asked them to do.

Other avenues would also provide little protection. Neither Witness K nor Collaery could have gone to a parliamentarian or a parliamentary committee to make their case. There is no genuine body of complaint outside the orbit of the intelligence community, which remains fiercely opaque to scrutiny.

Australia remains, in other words, one of the most secretive and, it should be said, punitive democracies when it comes to dealing with its public servants and whistleblowing. It is little wonder that South Australian senator Rex Patrick released a statement in response to Witness K’s conviction, claiming to be ‘ashamed to be an Australian’.

‘Push’Em All’: Corroding the Rule of Law

Australian society is being slowly fractured into classes of differential vulnerability, to whom different laws and rights apply.