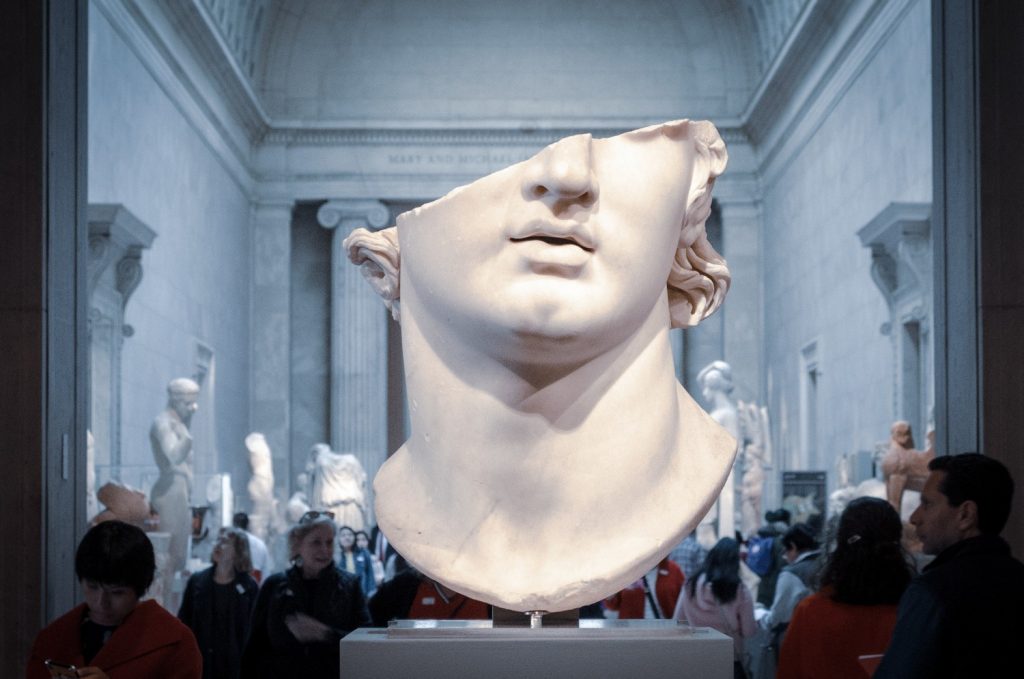 The new wave of neo-Nazis and white supremacy nationalists are using ancient Greek and Roman sculpture in their propaganda as proof of the supreme Aryan race in history and culture. They consider it ‘white sculpture’. As an artist and avid follower of geopolitics, this is completely confounding.

I vividly recall neo-Nazi skin heads in Sydney in the 1990s wearing t-shirts with the threatening ‘Speak English or Die’ emblazoned on them. The racism of that period towards anyone who wasn’t white was brought to life in Geoffrey Wright’s film Romper Stomper. The film portrays disturbing anti-Vietnamese tensions in Melbourne at the hands and boots of Russell Crowe’s character Hando. Among other things, Hando rails against being fed Italian food, calling it ‘wog food’. So much for the Roman forebears of neo-Nazi ideology today. Today, neo-Nazis’s use of ancient Greek and Roman sculpture seems to be ignorant of the fact that the sculpture they are appropriating depicted the very ethnicities they hate. As most ancient sculpture was painted, those ethnicities were once plain to see.

Between 2005 and 2010 I led a group of artists exploring modern painted sculpture in historical context, examining how painted sculpture came to be lost in the Western world. The separation of painting and sculpture departments and programs occurred in the art school system developed during the Renaissance. What perplexed me and my fellow artists was why an olive-skinned Mediterranean empire would worship white skin over their own, as the marble-white statues seemed to indicate. It’s well-known that Romans considered themselves to be superior to other cultures. To kneel to the pale cultures north of the centre of Roman power was clearly ridiculous.

During the excavation of Pompeii, it was noticed that sculptures coming out of the ash were painted in bright, earthy colours. It was notable too that the Pompei frescos depicted artists painting sculptures. Perhaps the most striking example in our tour was the statue of Augustus Prima Porta, in Rome, excavated by archaeologist Giuseppe Gagliardi in 1863. Augustus’s tunic was in bright red and purple. The director of New York’s Metropolitan Museum Edward Robertson (1910–1931) was present during the excavation of the Athenian Acropolis and he too noted how sculptures unearthed here were painted, indeed that when excavated the sculptures were coloured, although the colour was lost after a few days in the light.

By the time of the Renaissance (1300–1600), most if not all of the paint used in Greek and Roman sculptures had faded, fallen off or been washed off because people thought it was dirt. Leonardo DaVinci and Michelangelo, seeking to recreate classical Greek and Roman sculpture, had no idea that these ancient sculptures had been painted. During the Renaissance, the schools of painting and sculpture were set on separate trajectories. The father of art history, German art critic Johann Joachim Winckelmann, author of the influential History of the Art of Antiquity (1764) wrote of white marble sculptures like the Apollo of Belvedere as depicting the ‘epitome of beauty because the whiter the body is, the more beautiful it is’. Unfortunately this attitude prevailed towards white sculpture right through to the period of modern art.

It certainly doesn’t help that Hitler and Mussolini spoke of their love of white marble, seeing it as representing Aryan purity. Both dictators supported fascist artists and artworks. But of course the populations of the Roman Empire were diverse in skin colour, and ancient painted sculpture would have represented this. Roman emperor Septimius Severus (194–211) was north African and dark-skinned; surely painted portraits of the time showed this. The sculptural busts of this Black emperor would have been painted dark, reflecting the emperor’s skin colour, but the examples we see in museums today are white. It has to be seriously considered that over time the paint on these busts was deliberately washed off.

It’s difficult to know if a culture of conscious obstructive racism contributed to the whitening of such ancient works, but conscious attempts have been made recently to restore colour to sculpture. In 2007, Harvard University museums curated an exhibition called Gods in Color. This dynamic show recreating painted ancient sculptures was a shock to audiences, undermining preconceived ideas of white sculpture, particularly those depicting subjects of Greek and Roman origin. This exhibition was followed by Gods in Colour at Oxford University in 2014, and, more recently, by the Metropolitan Museum’s exhibition Polychromy Chasing Color.

The rediscovery of painted sculpture brings a whole new perspective to art history and art making. Artists such as Jeff Koons use colour to adorn his statues. His Apollo Kithara (2019–2022) attempts a recreation of the sculpture Apollo of Cyrene, held at the British Museum. This sculpture recreates the colours of the original, albeit with Koons’ glossy touch. It’s an outstanding piece, though perhaps the skin colour could have been darker or more bronzed. I say this because the stunning, painted sculpture reproduction Augustus Prima Porta, by Emma Zahonero and Jesús Mendiola (2017), with similar production quality to Koons’s Apollo, has absolutely outstanding colour recreation of its subject.

I hope that this history and new insight becomes more mainstream—that people will see through neo-Nazi propaganda and the appropriation of white sculpture to realise the ridiculousness of their claim that the sculptures of antiquity stand for the purity of the white race. At the least you could say that today’s neo-Nazis are white-washing European cultural history; their erroneous assumptions, carrying hateful messages, are simply not borne out in the history or art.

Augustus Firestone studied at the National Art School of Australia and in Florence, Italy. He led the Painted Sculpture art movement, 2005 – 2010.