What Did East Timor Do To Deserve Us? 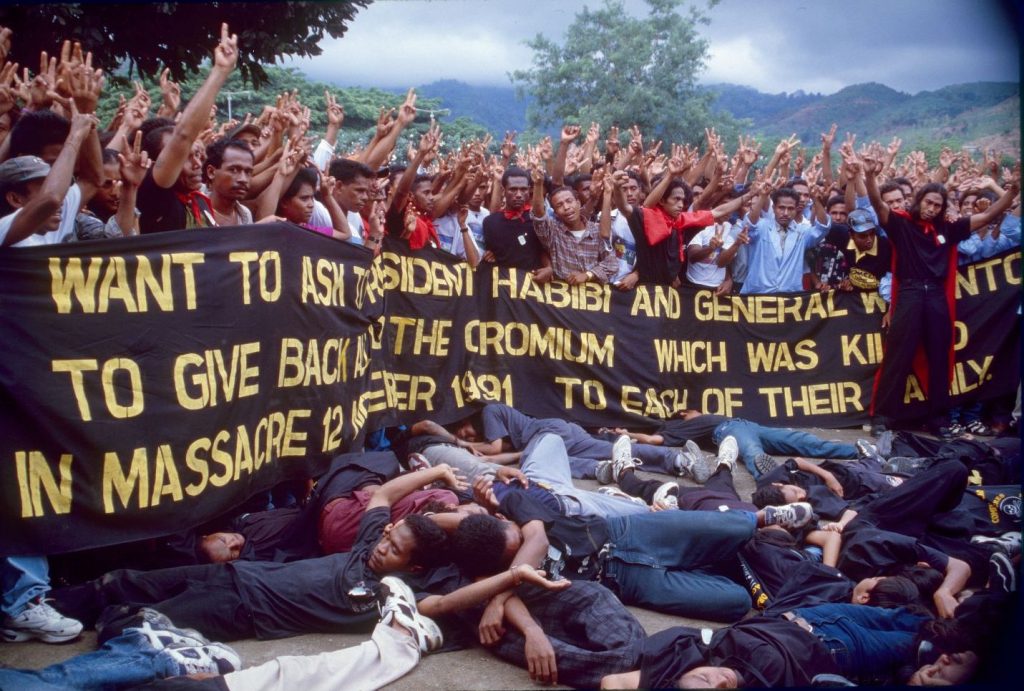 A Narrative of Denial: Australia and the Indonesian Violation of East Timor, by Peter Job (Melbourne University Press, 2021).

The political establishment in Canberra often talks about the importance of human rights—as far as they relate to other people’s obligations. It has taken a position towards China of almost howling indignation, huffing at the treatment of the Uighur population with accusations of genocide. It has taken issue with Beijing’s security measures against the residents of Hong Kong, and the territorial sanctity of Taiwan. But such righteousness grows muted when it comes to countries closer to home. There, the calculations are steelier, the bleeding hearts fewer.

Australian diplomacy towards East Timor has always been a brew of thorny denials and mock benevolence. Be it approval for Jakarta’s invasion and occupation of the former Portuguese colony in 1975, or an interest in exploiting the area’s access to natural resources, the relationship has been dishonest, deceptive and condescending.

Sceptics have been taken to task for raising this point. Labor’s foreign affairs spokesperson Laurie Brereton was given a tongue-lashing by Gough Whitlam in 1999 for being ‘shallow, shonky and shabby’, an ‘ill-educated’ sort, for suggesting that his party’s hero had failed to discourage the Indonesian invasion in 1975. Brereton had described Australia’s policy as ‘dangerously ambiguous’.

That episode is a footnote to understanding Australian political attitudes to East Timor. These are well captured in Peter Job’s expansive work on the obfuscations, denials and shape-shifting about Indonesia’s near-quarter-century occupation. Job’s personal interest in the matter is undeniable. In 1978 he ran a short-wave radio link in Darwin between the Revolutionary Front for an Independent East Timor (Fretilin) in Dili, its headquarters in Mozambique, and the New York–based leader José Ramos Horta. In A Narrative of Denial, he makes good use of interviews, oral and written sources and a large trove of archival material. He is blistering and unsparing about his country’s inglorious complicity with and appeasement of Jakarta.

Troubling for the Labor Party faithful is the role played by Prime Minister Whitlam—seminal, Job surmises, in reassuring Indonesia that its takeover would not only be permissible but desirable. The Carnation Revolution in Lisbon, which ended four decades of military rule under the Estado Novo, saw Portuguese Timor facing its own domestic turmoil. The decolonisation agenda of Portugal’s new government spurred on movements with differing, conflicting aims. The Timorese Popular Democratic Association (APODETI) preferred to see the territory integrated into Indonesia. The Timorese Democratic Union (UDT) favoured the status of Portuguese protectorate. For Canberra, the most troubling group to call for independence was Fretilin, which acted on socialist principles.

In 1974, Jakarta received signals from Peter Wilenski, Whitlam’s private secretary, that Indonesia’s acquisition of Timor was preferable lest other unfriendly powers do the same. The recipient was Harry Tjan, an associate of General Ali Murtopo, himself an indispensable agent of General Suharto.

Solid and bolstering reassurance came from Whitlam himself in September 1974. Meeting in Gua Semar in Central Java, Suharto brought the Australian prime minister into his circle of trust. It stood to reason: Whitlam saw Indonesia, Job points out, as a pillar of his own anti-colonialist policy and central to the role of ASEAN as a ‘model of regional cooperation’.

All of this proved reassuring to ears in Jakarta. In one discussion with Australian officials, including the Department of Foreign Affairs (DFA) and Indonesian Section Chief Michael Curtain, Tjan openly admits that Australia had ‘helped push Indonesia in the direction of a decision on integration after the 25 April revolution in Portugal’.

Ironically, Australia’s anti-colonial policy did not extend to rebuking Indonesia for its self-aggrandisement. In this, Whitlam proved sympathetic to Jakarta’s expansionism. Timor was an aberrant creature of European planning or ‘an accident of Western colonial history’. Whitlam also considered that it was too small to exist independently.

A somewhat split attitude then developed: incorporation was tacitly encouraged while lip service was paid to the idea of Timor’s self-determination. During Prime Minister Malcolm Fraser’s tenure (1975–1983), the policy was further refined. Indonesian human rights abuses and atrocities in the territory were de-emphasised. Accusers were discredited. The dangers of instability posed by Fretilin were embellished.

A Narrative of Denial documents numerous efforts made by the Australian government to frustrate and refute narratives of Indonesian bad behaviour. Efforts to address the predations of Indonesia’s military (TNI) were scorned publicly and mocked privately. Wearing glasses heavy with Cold War tinting, Fraser and his officials could only look at the anti-Indonesian resistance as undesirable while ostensibly offering support for the principle of autonomy.

With reports of killings in Dili growing as the Indonesian military executed its invasion, Job writes, the Fraser government ‘went about providing as much support to the Indonesian Government’s position as appearances would allow while publicly claiming to adhere to its stated position of opposing the use of force and supporting the principle of determination’. Direct condemnation of the invasion was eschewed, with one media release on the date of the invasion (7 December 1975) by Foreign Minister Andrew Peacock going so far as to appreciate ‘the gravity of the problems posed for the Indonesian government’. Ample blame for the chaos, the statement went on to say, should be heaped upon ‘the internal disarray’ of Portugal and on Fretilin for its opportunistic universal declaration of independence.

In the international arena, Australian diplomats sought to shield Indonesia from criticism, becoming its most reliably obsequious defenders. Within the UN General Assembly, Australia was busy softening the draft resolution expressing concern at Jakarta’s conduct. Duncan Campbell, speaking to the motion at the assembly as minister in Australia’s UN mission, suggested that Indonesia was an innocent party that had adopted ‘law and order’ measures in its national interest to rectify an unstable situation.

When abuses were aired, as they were in The Dunn Report on East Timor published in February 1977, tactical approaches to minimise the findings, often in conjunction with US officials, were adopted. J. S. Dunn, former military intelligence officer and consul to Portuguese Timor in the early 1960s, caused much consternation by documenting the accounts of Timorese refugees collected during a trip to Portugal. He was satisfied that estimates of 100,000 deaths, drawn from Catholic Church sources, were reliable.

In parliament, Foreign Minister Peacock refused to entertain the content of the allegations outlined in the report, preferring to delegitimise it as unofficial. To take it seriously might cause misunderstandings with Jakarta. Within the DFA, bureaucrats were dismissive of this compilation of ‘hearsay’ despite various corroborative accounts collected by other Australian politicians. DFA officials were also ‘pleased’ by a similar approach taken to the allegations in the report by US State Department officials. The more the report was promoted by Dunn in other countries, the keener Fraser government officials became to repudiate the more serious charges through a campaign of vigorous lobbying.

Job focuses on the period between 1975 and 1983, but it is worth considering what came afterwards. When John McCarthy assumed the role of Australian ambassador to Jakarta in 1997, he recalled a certain fraught wisdom that had been the mainstay of Australia–Indonesia relations, notably regarding East Timor: ‘A stable Indonesia and a working relationship with that country had to be the dominant Australian policy objectives’, he recalled in The Strategist (18 January 2020). But such a position did not preclude ‘criticism of the behaviour of the Indonesian military in East Timor or the suggestion that the East Timorese should have more say in managing their own affairs’. The latter is a fanciful reading.

At the lower levels of the diplomatic tree, discussion on how Canberra might encourage greater autonomy for East Timor began to circulate in the latter part of the 1990s. But the embassy, for the most part, remained opposed to East Timorese independence. What mattered was that Jakarta and East Timor should, as McCarthy put it, talk. The resignation of Suharto on 22 May 1998 and his replacement by the more flexible B. J. Habibie shifted some ground on the issue. It was Habibie himself, in a statement on 9 June that same year, who showed that Jakarta was willing to go further than any Australian proposal ever would. In January 1999, he suggested that East Timor would get its chance to vote in a referendum on its fate. Australia was being led, as it often was.

Even at this juncture, on the eve of East Timorese independence, Australian establishment forces around the pro-Jakarta lobby rallied with monochromatic consistency. Foreign Minister Alexander Downer of the Liberal Party concurred with Whitlam, who had been ‘understandably concerned with the prospect of a left-wing government in East Timor’.

The overwhelmingly pro-independence vote, with the blessing of the United Nations Mission in East Timor (UNAMET), took place at the end of August 1999. Efforts to discourage the process were instigated by Indonesian military–backed militias, resulting in violence, looting and arson. Downer and Prime Minister John Howard chose to qualify the violence as the product of ‘rogue elements’ rather than a planned, coordinated stratagem on the part of the TNI. That old habit of minimising the impact of Indonesian military violence proved a hard one to break.

It then fell to the Australian-led International Force East Timor (INTERFET), backed by UN Security Council resolution, to restore order in the aftermath of the independence referendum. This gave Australian politicians and strategists a chance to gloat about a sound human rights focused policy. The darker details of the past could be scrubbed away, and Howard could declare in parliament that all Australians had sensed ‘that a small, vulnerable community was about to be denied the freedom they fought for so long, and voted so overwhelmingly to achieve’.

This was characteristic dissembling, given that the Howard government had been deeply reluctant to commit troops to such an enterprise to halt militia violence. Even now, the apologists trumpet their satisfaction that Australian self-interest was served in Indonesia’s treatment of East Timor, despite a brutal, murderous occupation. That self-interest continues with the collusion between Commonwealth and Australian companies in exploiting the Greater Sunrise oil fields in the Timor Sea.

No one is denying that Australia was put in a difficult position by the expansionist aims of the Suharto regime. But the near-unqualified encouragement of Indonesian aims, Australia’s defence of Jakarta’s record in the UN and in other fora, and the dismissive attitude to the independence aspirations of Fretilin, stand out as dark blotches in a foreign policy free of courage or conscience.

My view is that the very least this country can do for our old WW2 ally East Timor, so callously betrayed by modern politicians of both major persuasions, is to withdraw any claim on the resources of their Greater Sunrise Oilfield, and leave it ALL to them.
The least we can do.