War in Europe and the rise of raw propaganda 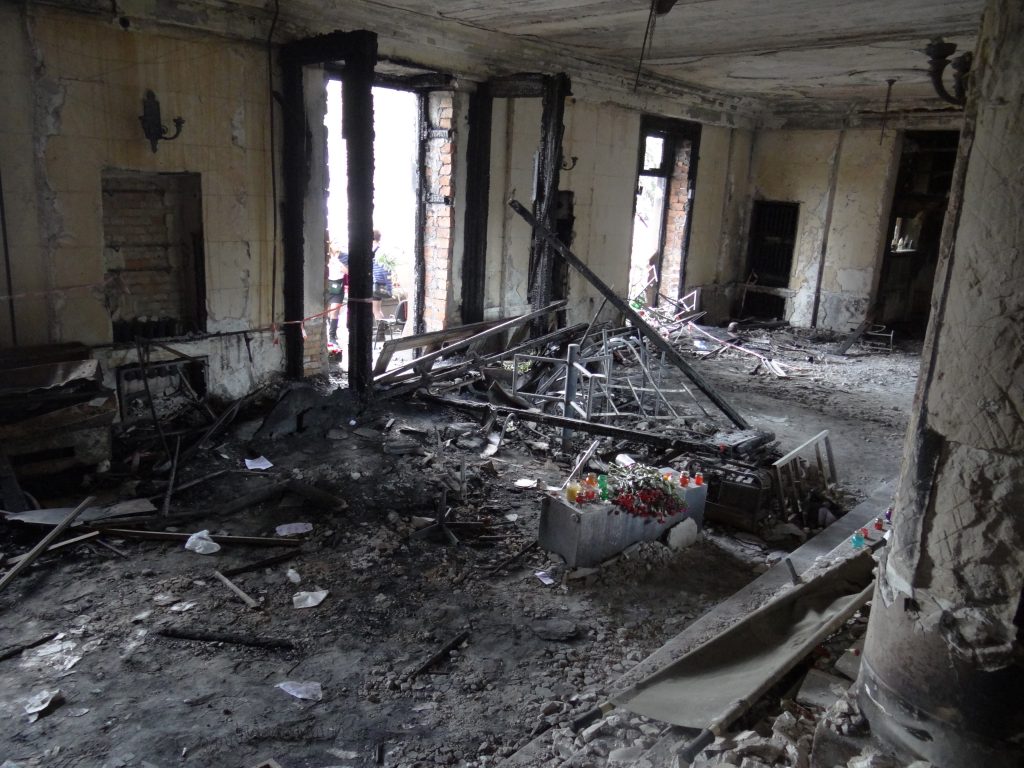 Inside Odessa's Trade Unions House after it was burnt by far right forces, killing 42 people trapped inside. Ukraine, 2/5/2014

Marshall McLuhan’s prophecy that “the successor to politics will be propaganda” has happened.  Raw propaganda is now the rule in Western democracies, especially the US and Britain

On matters of war and peace, ministerial deceit is reported as news. Inconvenient facts are censored, demons are nurtured. The model is corporate spin, the currency of the age. In 1964, McLuhan famously declared, “The medium is the message.” The lie is the message now.

But is this new? It is more than a century since Edward Bernays, the father of spin, invented “public relations” as a cover for war propaganda. What is new is the virtual elimination of dissent in the mainstream.

The great editor David Bowman, author of The Captive Press, called this “a defenestration of all who refuse to follow a line and to swallow the unpalatable and are brave”. He was referring to independent journalists and whistle blowers, the honest mavericks to whom media organisations once gave space, often with pride. The space has been abolished.

The war hysteria that has rolled in like a tidal wave in recent weeks and months is the most striking example. Known by its jargon, “shaping the narrative”, much if not most of it is pure propaganda.

The Russians are coming. Russia is worse than bad. Putin is evil, “a Nazi like Hitler”, salivated the Labour MP Chris Bryant. Ukraine is about to be invaded by Russia – tonight, this week, next week. The sources include an ex CIA propagandist who now speaks for the US State Department and offers no evidence of his claims about Russian actions because “it comes from the US Government”.

The no-evidence rule also applies in London. The British Foreign Secretary, Liz Truss, who spent £500,000 of public money flying to Australia in a private plane to warn the Canberra government that both Russia and China were about to pounce,  offered no evidence. Antipodean heads nodded; the “narrative” is unchallenged there. One rare exception, former prime minister Paul Keating, called Truss’s warmongering “demented”.

Truss has blithely confused the countries of the Baltic and Black Sea. In Moscow, she told the Russian foreign minister that Britain would never accept Russian sovereignty over Rostov and Voronezh – until it was pointed out to her that these places were not part of Ukraine but in Russia. Read the Russian press about the buffoonery of this pretender to 10 Downing Street and cringe.

This entire farce, recently starring Boris Johnson in Moscow playing a clownish version of his hero, Churchill, might be enjoyed as satire were it not for its wilful abuse of facts and historical understanding and the real danger of war.

Vladimir Putin refers to the “genocide” in the eastern Donbas region of Ukraine. Following the coup in Ukraine in 2014 – orchestrated by Barack Obama’s “point person” in Kyiv, Victoria Nuland – the coup regime, infested with neo-Nazis, launched a campaign of terror against Russian-speaking Donbas, which accounts for a third of Ukraine’s population.

Overseen by CIA director John Brennan in Kyiv, “special security units” coordinated savage attacks on the people of Donbas, who opposed the coup. Video and eyewitness reports show bussed fascist thugs burning the trade union headquarters in the city of Odessa, killing 41 people trapped inside. The police are standing by. Obama congratulated the “duly elected” coup regime for its “remarkable restraint”.

In the US media the Odessa atrocity was played down as “murky” and a “tragedy” in which “nationalists” (neo-Nazis) attacked “separatists” (people collecting signatures for a referendum on a federal Ukraine). Rupert Murdoch’s Wall Street Journal damned the victims – “Deadly Ukraine Fire Likely Sparked by Rebels, Government Says”.

Professor Stephen Cohen, acclaimed as America’s leading authority on Russia, wrote, “The pogrom-like burning to death of ethnic Russians and others in Odessa reawakened memories of Nazi extermination squads in Ukraine during world war two. [Today] storm-like assaults on gays, Jews, elderly ethnic Russians, and other ‘impure’ citizens are widespread throughout Kyiv-ruled Ukraine, along with torchlight marches reminiscent of those that eventually inflamed Germany in the late 1920s and 1930s …

“The police and official legal authorities do virtually nothing to prevent these neo-fascist acts or to prosecute them. On the contrary, Kyiv has officially encouraged them by systematically rehabilitating and even memorialising Ukrainian collaborators with Nazi German extermination pogroms, renaming streets in their honour, building monuments to them, rewriting history to glorify them, and more.”

Today, neo-Nazi Ukraine is seldom mentioned. That the British are training the Ukrainian National Guard, which includes neo-Nazis, is not news. (See Matt Kennard’s Declassified report). The return  of violent, endorsed fascism to 21st-century Europe, to quote Harold Pinter, “never happened … even while it was happening”.

On 16 December, the United Nations tabled a resolution that called for “combating glorification of Nazism, neo-Nazism and other practices that contribute to fuelling contemporary forms of racism”. The only nations to vote against it were the United States and Ukraine.

Almost every Russian knows that it was across the plains of Ukraine’s “borderland” that Hitler’s divisions swept from the west in 1941, bolstered by Ukraine’s Nazi cultists and collaborators. The result was more than 20 million Russian dead.

Setting aside the manoeuvres and cynicism of geopolitics, whomever the players, this historical memory is the driving force behind Russia’s respect-seeking, self-protective security proposals, which were published in Moscow in the week the UN voted 130-2 to outlaw Nazism. They are:

These amount to a comprehensive draft of a peace plan for all of post-war Europe and ought to be welcomed in the West. But who understands their significance in Britain? What they are told is that Putin is a pariah and a threat to Christendom.

Russian-speaking Ukrainians, under economic blockade by Kyiv for seven years, are fighting for their survival. The “massing” army we seldom hear about are the thirteen Ukrainian army brigades laying siege to Donbas: an estimated 150,000 troops. If they attack, the provocation to Russia will almost certainly mean war.

In 2015, brokered by the Germans and French, the presidents of Russia, Ukraine, Germany and France met in Minsk and signed an interim peace deal. Ukraine agreed to offer autonomy to Donbas, now the self declared republics of Donetsk and Luhansk.

The Minsk agreement has never been given a chance. In Britain, the line,  amplified by Boris Johnson, is that Ukraine is being “dictated to” by world leaders. For its part, Britain is arming Ukraine and training its army.

Since the first Cold War, NATO has effectively marched right up to Russia’s most sensitive border having demonstrated its bloody aggression in Yugoslavia, Afghanistan, Iraq, Libya and broken solemn promises to pull back.  Having dragged European “allies” into American wars that do not concern them, the great unspoken is that NATO itself is the real threat to European security.

In Britain, a state and media xenophobia is triggered at the very mention of “Russia”. Mark the knee-jerk hostility with which the BBC reports Russia. Why? Is it because the restoration of imperial mythology demands, above all, a permanent enemy? Certainly, we deserve better.

“ Is it because the restoration of imperial mythology demands, above all, a permanent enemy?”
Or is it because the liberal democratic capitalisation of Russia didn’t go quite to plan? The petrol station with bombs kept all that petrol (and gas) largely in Russian hands with its foreign investment laws, after all- hence “Russian kleptocracy”.
Of course, to ordinary people like me, a kleptocrat is a plutocrat is a rentier, whether they speak Russian or Strine, but I appreciate this is an unfashionable view.
I often wonder if Russia would have been welcomed as one of us if she’d let Western corporations get their hands on it instead of keeping it in the family, though suspect it would have made little difference as the US had already planned to expand NATO before the two Germanys even unified. They had to- too many Americans employed in the armaments industry to give up NATO.

It is very hard to reconcile the contents of this piece with the news coming out of Ukraine today. I put it down to unfortunate timing, rather than to any obsession on the author’s part.
John Pilger has written some excellent stuff, but this piece is unfortunately not an example. As my old high school English teacher would say: ‘Can do better. Must try harder.’

This pro-fascist piece by Pilger does not surprise me, as he has been on the wrong side for a long time now. Had he retained any of the values he displayed when he opposed the Vietnam War and stood in solidarity with the Vietnamese, he would now be standing on the side of the Ukrainian people and, more to the point, supporting and publicizing their urgent calls for more lethal aid from ‘the West’, including a No Fly Zone. But, as Mao said, things turn into their opposite.

John Pilger a fascist…? Such an absurd accusation evacuates all meaning from the history of fascism. Really, this comment is totally unengaged from the actual content of the above article, as well as any kind of political analysis beyond knee-jerk reaction, and totally removed from the hideous mess that is the situation in Ukraine. Things turn to their opposite indeed: Mao quotes are used to out-hawk the Pentagon.