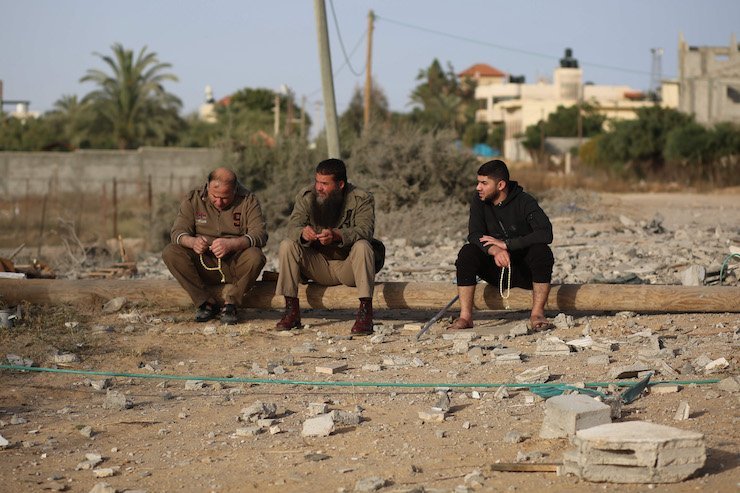 Palestinians sit in the rubble of the destroyed house of Mohammed Abu Aisha from Nusseirat refugee camp , shelled by Israeli forces last night, on May 6, 2019. Photo by Hassan Jedi/Flash90

Edward Said’s 1979 book on the ongoing dispossession of his people was called The Question of Palestine. For Said, Palestine could be thought of as a ‘question’—an object of controversy. As such, it was something to which a variety of responses could be expected. In the decades since, at the same time that it has robbed Palestinians of their land and lives, Israel has also worked to rob them even of this ‘question’ status. For Israel, there can be no true ‘question of Palestine’ because Palestine does not, or should not, exist. And if, despite all its efforts, a stubborn Palestinian question continues to be posed, the only possible answer, for Zionist anti-Palestinianism, can be silence—silence about Palestinians, cultivated through rigorous censorship and lawfare, and silence from Palestine itself, imposed through Israel’s varied strategies of ethnic cleansing: the apartheid laws, the separation wall, the monstrous Gaza blockade, the strangulating occupation.

Universities are particular sites in which silence over Palestine is enforced. In recent weeks, I have come to a fresh appreciation of the density and violence of this enforced silence. The silence, as I have recently encountered it, is of three kinds: silence imposed, silence chosen and silence conceded. Together, these silences are as eloquent about the current state of the struggle for Palestine on campus as they are about the nature of academic professionalism in 2021.

The imposed silence was that of a Palestinian colleague at a West Bank university. I had invited them—given what follows, I won’t even specify their gender—to present an online talk about the difficulties Palestinians face in higher education under military occupation. The talk was to be hosted by Sydney University Staff for BDS, a group of staff at Sydney University who support the Palestinian call for an institutional academic boycott of Israel. I was delighted and also somewhat surprised when my colleague immediately and enthusiastically accepted the invitation. But then, later, the apologetic email arrived: they couldn’t do the talk after all, even under conditions of complete anonymity, even with the camera turned off. Israel had recently denied another academic entry into Jordan because of their digital activism. My colleague simply couldn’t risk that, or any other possible consequences that might jeopardise their or their department’s work. Entirely understandably, they reached the same decision as many other Palestinian academics: silence was their only option.

The chosen silence was entirely different, and takes longer to relate. In February, Professor Alison Bashford, a distinguished UNSW historian of medicine and health, was named as one of the recipients of Israel’s annual Dan David Prize, which in 2021 recognized outstanding contributions to medicine and its wider public understanding. The Dan David Foundation is closely linked to the Israeli political and academic establishment: it is headquartered and administered at Tel Aviv University, and its chairperson is a former Israeli ambassador to the United States; Henry Kissinger sits on the board that oversees the annual prize. The prize was naturally understood as a celebration and international endorsement of Israel’s response to the pandemic, a theme that figured explicitly in Alison Bashford’s citation. The 2021 instalment of the David award thereby contributed to Israel’s image as a public-health leader, distracting attention from the fact that it is denying access to vaccines to the five million and more Palestinians under its thumb in the occupied territories.

Accepting the prize was a clear violation of the call on academics by Palestinian civil society to cut ties with Israeli institutions until Israel abandons its apartheid policies. When efforts to approach Professor Bashford privately failed, an open letter was coordinated, by me and other colleagues, which made clear the rationale for turning the prize down, just as Professor Catherine Hall, a historian at University College London, had done in 2016 after encouragement from BDS activists. The letter has now been signed by over 340 academics and students the world over. Signatories include highly distinguished scholars like Rashid Khalidi, Judith Butler, Nadia Abu El-Haj, Wael Hallaq, Ilan Pappe, John Keane and others, as well as many other colleagues in history and related humanities disciplines in Australia. A few days after the letter was initiated, with over 220 signatures on it already, I wrote to Professor Bashford, alerting her to it and pointing out that the two major Australian Palestinian rights organisations, the Australia Palestine Advocacy Network and BDS Australia, both supported the call on her to decline the prize. Professor Bashford did not reply.

The open letter gathered many signatories, but not everyone we asked to add their name was prepared to do so. Some confided in us that, although they agreed, they weren’t prepared to say so publicly because they were ‘worried about the consequences’. This is the third silence on Palestine—neither directly and obviously imposed by the circumstances, like the silence of my Palestinian colleague, nor chosen, like Professor Bashford’s. This silence is conceded, with varying degrees of reluctance, to the prevailing taboos of the academic profession, among which anti-Zionism has a prominent place.

Partisans of this third kind of silence are rarely clear about what the consequences they so fear might be, nor about why the risk in criticising Israel is greater for them than for others. Their anxieties emerge from the half-light of misgiving, discomfort and evasion that Zionists have carefully fostered whenever criticising Israel is in question. This is not the tactical silence of the determined Palestine supporter, predicated on the need to choose one’s battles so as to more powerfully defend the cause later. The people who observe it are not, in general, biding their time so as to formally take a side for Palestinian rights at a more opportune moment. Explicit support for Palestine is simply not on their agenda.

This silence couches its anxieties about reprisal in the language of vulnerability. But subtly, and often no doubt thoughtlessly, it enacts the opposite: by refusing to expose themselves out of vague worries about ‘consequences’, observers of the third silence further isolate those who do choose to speak, whom they leave to face any possible backlash alone. This kind of silence is, of course, entirely human, and few have ever been innocent of it—if not over Palestine, then over other issues. But it is a major source of the tacit ascendancy of Zionism in universities.

When the David prize was announced, Professor Bashford’s success was noted briefly in the Sydney Morning Herald, and she granted an interview to the Australian Academy of the Humanities. When her award was being celebrated, she had no reluctance—understandably—to comment on it publicly. From a human point of view—one long denied to Palestinians—it’s also understandable enough that she has preferred to ignore Palestinians and their supporters when they have criticised her acceptance of the award. But in any scholar who emphasises their work’s relevance to current problems, such unaccountability is an intellectual and political failure.

Like the silence of the other David Prize participants, who have also been called on to turn down the honour, Professor Bashford’s silence in the face of Israel’s racism against Palestinians is a textbook case of the Palestine exception in progressive politics. It contrasts markedly with attitudes articulated in her published work, where she suggests an unambiguous opposition to all forms of racism, apartheid and political oppression, expressed in references to the ‘infamous’ White Australia policy, the ‘crude colonial racism’ of Australian history, or the ‘welcome’ undoing of racist immigration laws.

Sometimes, this antiracism is quite explicit, for instance, when discussing the Australian public health authority R.W. Cilento, who is said to provide an instance of a wider tendency in Australian tropical medicine: ‘In a stunning colonizing move’, Professor Bashford writes, ‘non-white people were rendered absent from this space, indigenous people were discursively minimized and contained as a manageable public health problem’. Yet this discursive minimisation is exactly what her own silence over Palestine accomplishes.

This kind of silence is symptomatic of a widely held aversion to decisive political action in the academic profession. The aversion is most glaring when it comes to resisting the corruption and degradation inflicted on universities by neoliberal management practices and the withdrawal of government financial support. There is plenty of opposition—in the abstract. But when it comes to speaking up when it counts most, the profession’s impressive critical acumen, more often than not, goes quiet.

Whether over Palestine or the degradation of universities, these silences reinforce the moral imposed for decades by the neoliberal wrecking ball: humanistic scholarship has nothing to offer the real world. It implies nothing about how individuals should act, or how society or even universities should be run. Outside the self-referential academic sphere and its treadmill of honours, distinctions and rewards, its values are irrelevant and meaningless.

If antiracism can be switched on and off as a principle—repeatedly asserted in print, but abruptly suspended when the question of Palestine is raised—then its expressions are degraded into mere performances. If they are not actually enacted, academic statements of antiracism principally function as markers of distinction, the insignia of an intellectual elite exempted from the need to put its principles into practice.

Since the open letter was published, the new Jerusalem Antisemitism Declaration has, despite its flaws, strengthened the hand of boycott proponents by recognising the fact, obvious to almost everyone except zealots for ethnic cleansing and apartheid, that boycott is a normal form of protest and not antisemitic. Further support comes from the simple fact that, as I’ve argued elsewhere, political boycotts are actually common practice in academia and should therefore not be excluded in the case of Israel.

This is even more the case when, in fact, an internal political boycott within the Zionist community shaped the very beginnings of Jewish higher education in Palestine. In 1914, Zionist teachers boycotted high schools run by the Hilfsverein der deutschen Juden, the German Jews’ Relief Organization, one of the sponsors of the Technion in Haifa (the first Jewish university in Palestine). Zionists boycotted the Hilfsverein’s feeder schools to force it to make Hebrew (not German) the principal language of instruction. Parents also threatened to boycott the Hilfsverein school in Jaffa by removing their children from it unless Hebrew was used to teach science. This episode has rarely been referred to in discussions of the academic boycott, which have rightly emphasised the long Palestinian history of boycotts, but it has a real significance: far from being beyond-the-pale violations of supposed universal norms of intellectual freedom, political boycotts like the one currently called for against Israel were instrumental in shaping the prehistory of the Israeli university system.

COVID Among the Palestinians

As the pandemic raged, it appeared that Israel’s disregard for Palestinian life, an institutionally entrenched position, would be costly not only for Palestinians but for Israelis themselves.

Nick Riemer is an academic in the English and Linguistics Departments at the University of Sydney, writing in a personal capacity.’