Unexplained Ordnance: A Missile on Aboriginal Land and a Breakthrough Legal Complaint 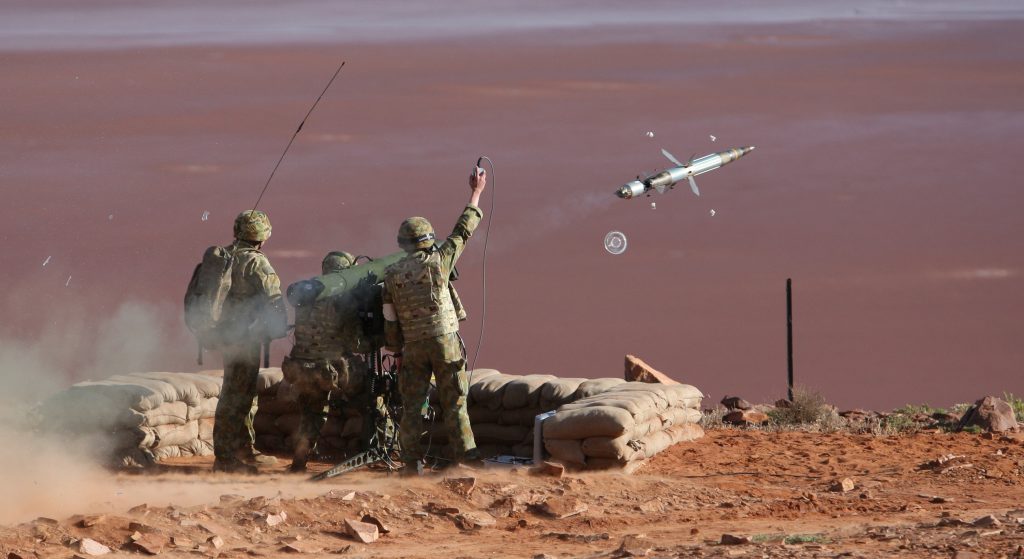 A ground-breaking legal complaint has arisen after First Nation’s elders Andrew and Robert Starkey discovered an unexploded missile on their country. The brothers discovered the missile, manufactured by arms multinational Saab, in Lake Hart West, a registered Indigenous heritage site within the vast Woomera Prohibited Area. The Starkeys are Kokatha Badu (respected senior figures, or lore men) from the Western Desert region of South Australia who have devoted decades to protecting heritage sites on their land.

In a complaint to the OECD, the Starkeys alleged that Saab had breached OECD guidelines by failing to undertake or maintain ‘adequate human rights due diligence which could prevent their product from being used in human rights violations’, and which also resulted in a failure to ‘protect and preserve the integrity of [those] heritage sites’ for which the Starkeys have custodial responsibilities.

Australia hasn’t seen anything like this case before. In fact, in the world of OECD complaints, it’s a first.

The Starkey complaint has resulted in a precedent-setting initial assessment from the OECD that could have ramifications for multinational weapons companies. The OECD’s Australian contact point has decided that arms export permits granted by national governments do not provide weapons companies with immunity from responsibility for human rights violations resulting from the use of their products or services.

This decision overturns earlier OECD precedents set by other countries, including the United Kingdom and the United States, which allowed weapons companies  to shelter behind  arms export permits. The initial assessment in the Starkey complaint says that government-issued arms export permits on their own are insufficient protection, and that the OECD guidelines require global arms manufacturers to conduct ongoing due diligence on human rights issues. Manufacturers of weaponry used to commit war crimes against civilians in Yemen, for example, could now be exposed to similar complaints.

The Defence Department, which has long fobbed off the Starkeys’ heritage concerns, took a year to remove the missile. Andrew says they next tried to approach Saab—whose marketing tagline is ‘It’s a human right to feel safe’—but were again brushed off and referred back to Defence. The Starkeys then lodged their complaint with the OECD’s Australian National Contact Point (AusNCP) in September 2021.

The OECD Guidelines for Multinational Enterprises are a comprehensive code of responsible business conduct that governments have committed to promoting. Each country that chooses to adhere to the guidelines must establish a national contact point to promote and implement the guidelines. The complaints procedure is intended to provide a non-adversarial ‘forum for discussion’ to examine and resolve complaints against multinationals.

The OECD covers most of the world’s weapons makers— 80 of the top 100 arms corporations, according to an analysis of data compiled by the Stockholm International Peace Research Institute. These companies represented 80 per cent (US$425 billion) of the US$531 billion in sales by the top 100 in 2020. Saab, ranked thirty-sixth, had US$3.4 billion in sales in 2020.

Saab responded to the Starkeys’ complaint saying, amongst other things, that its supply of weaponry to Defence was subject to ‘strict export control laws’ aimed at preventing their use in harmful ways and that Swedish export controls ‘require human rights issues to be considered’. This rote argument is parroted across the arms industry and is one that Australia’s Defence Exports Controls Office relies on to justify its continued arms exports to nations engaged in serial human rights abuses, including Saudi Arabia, the United Arab Emirates, Israel and Indonesia.

‘No nation gets to pick and choose which laws to comply with, nor do they get to choose who will or will not be held accountable’, says the Starkeys’ international human rights lawyer John Podgorelec. ‘The international law has to be applied as evenly to the Saudi Yemen conflict as it would to the Russia Ukraine conflict.’

Weapons companies have long benefited from a myopic reliance on one-off export permit approvals. However, the extensive evidence of war crimes and the resultant catastrophe still unfolding in Yemen, fuelled in large part by US– and UK­ supplied weaponry, shows that the so-called strict permit approval system is an abject failure in protecting human rights.

The AusNCP’s initial assessment sounds a warning to the arms industry worldwide. The AusNCP has now offered its ‘good offices’ to facilitate a negotiated resolution between the Starkeys and Saab. The Starkeys are ready to negotiate. Whether the ‘good offices’ phase proceeds depends on Saab, which has so far said it will ‘review the findings, and continue to engage with the AusNCP, to determine any further required actions’.

Andrew Starkey is pleased with the result so far, but his relief is tempered with discontent. ‘The situation is so bad in Australia. The legislation is so weak that we needed to rely on international law to get justice.’

Dr John Pace, who is also advising the Starkeys, is a globally recognised expert in human rights law with more than fifty years’ experience, including at the United Nations. Pace says that the obligation for due diligence on human rights grounds never abandons the equipment. ‘It is an ongoing, responsive and changing process, not a one-off rubber stamp.’

Amnesty International has noted, in Human rights policies in the defence sector, that, ‘There is now a clear global consensus that companies have a responsibility to respect all human rights wherever they operate’. There is also increasing acceptance that good business practices in one area do not offset harm in another. Corporate behaviour must be globally consistent.

A significant factor influencing the handling of the Starkeys’ complaint is the web of conflicting interests in which Saab features strongly. Such conflicts were not disclosed to the Starkeys during the complaint process. It is this inconsistency in its corporate behaviour that has brought Saab undone. As Andrew says, ‘Defence seems more interested in protecting a Swedish company than in protecting Australian culture’.

Saab’s corporate code of conduct declares that the company always seeks to mitigate the risk of potential conflicts of interest, including those related to employing former public officials who have had a position with an authority that deals with matters concerning Saab.

Well before Saab’s missile was found in the Lake Hart West heritage site, an influential person on Saab’s Australian board had serious conflicts of interest. Former defence minister David Johnston was a member of the Saab board for more than three years from March 2017. The same month he joined Saab, Johnston was appointed by the federal government to the Council of the Australian Strategic Policy Institute (ASPI), the (supposedly independent) government agency advising government on defence and national security issues. ASPI’s research and writings include commentary and advice on proposed defence procurements. Just over a year later, in April 2018, the federal government appointed Johnston to another publicly funded role, as Australia’s first Defence Export Advocate, providing ‘international advocacy on behalf of local defence industry to help secure export sales and contracts’.

During the same period the ‘revolving door’ of senior executives between Defence SA (South Australia’s lead government agency for all defence matters) and Saab started turning, and ultimately became a factor in this missile complaint.

Saab Australia’s current managing director, Andy Keough, was chief executive of Defence SA from 2015 to 2017, before he was poached by Saab. Keough was replaced as Defence SA’s chief executive by Richard Price, who had worked in a senior role at Saab in Stockholm from 2013 to 2015 before joining Keough’s team at Defence SA in mid-2016. Price was Saab’s Australian managing director before he moved to Stockholm. Keough and Price worked together at Defence SA for more than a year.

As chief executive of Defence SA, Price also occupies an ex officio position on the Woomera Prohibited Area (WPA) advisory board, the primary governance body for the WPA ‘coexistence framework’. It was responsible for resolving the missile issue because it affected two key groups with competing interests in the WPA, the traditional owners, and Defence. Yet the board failed in this duty. Will anyone be held accountable for this significant failure, which led to the complaint being lodged with the OECD, and which has now exposed Saab, a key defence contractor, to significant scrutiny? Even more consequential, similar complaints may now follow against other arms manufacturers, both in Australia and globally.

Emails show that Price did not recuse himself from involvement in this issue of Saab’s missile despite his relationship with Keough, as well as with the Saab Group and the WPA advisory board. Saab Australia emailed Price directly about this matter, noting his membership of the WPA advisory board, and highlighting in bold the sentence advising that future legal action may be taken by the Starkeys in relation to Saab’s missile. Documents released by Defence SA also reveal that Price forwarded the email to a colleague and Defence SA communicated with the Defence Department following Saab’s request. Price thanked Saab for bringing the issue to his attention.

In other words, Saab, a Swedish multinational, had instant access at the most senior level, to both the state and federal government agencies responsible for dealing with the Saab missile problem, yet Andrew and Robert Starkey were fobbed off by all concerned.

In response to questions, Defence SA said the three emails released ‘encapsulated all correspondence between Defence SA and Saab, which was informative in nature due to Mr Price being a member of the Woomera Protected Area Advisory Board’. Saab Australia did not respond to questions.

On the same day (20 July 2021) that the Starkeys advised Defence that they intended to take their complaint to Saab, a Defence contract notice in the government’s AusTender database was amended, more than doubling the amount allocated to Saab for missile purchases, from $18.9 million to $45.4 million. One explanation might be that Defence was bringing forward purchases in case of an unfavourable outcome for Saab. Defence did not respond to questions about the amended contract notice.

The OECD’s guidelines include detailed recommendations for multinationals on due diligence procedures to ensure responsible business conduct, including on human rights. Due diligence is an ongoing process multinationals carry out to identify and manage potential and actual adverse impacts in their own operations, their supply chain, and other business relationships.

The due diligence guidelines are clear about avoiding adverse impacts on human rights and, in particular, the importance of engaging with Indigenous peoples who might be affected by the activities of the business. One adverse impact noted by the OECD in relation to human rights is ‘Failing to identify and appropriately engage with indigenous peoples where they are present and potentially impacted by the enterprise’s activities’.

The Starkeys are concerned that similar problems will recur. Says Andrew, ‘For us this is the same as the British atomic tests. We are the ones left to deal with the mess. They are erasing us one site at a time up there’.

Friends You Can’t Depend On

If the United States, United Kingdom and Russia risk nuclear war over Ukraine and a gas pipeline, that is bad enough; for Australia to join this insanity is worse.

Michelle Fahy is a researcher and writer investigating the close connections between the weapons industry and the Australian government. Her work has appeared in various independent publications including Progressive International, Declassified Australia, Consortium News and Michael West Media. She is on twitter @FahyMichelle and her archive is at Undue Influence