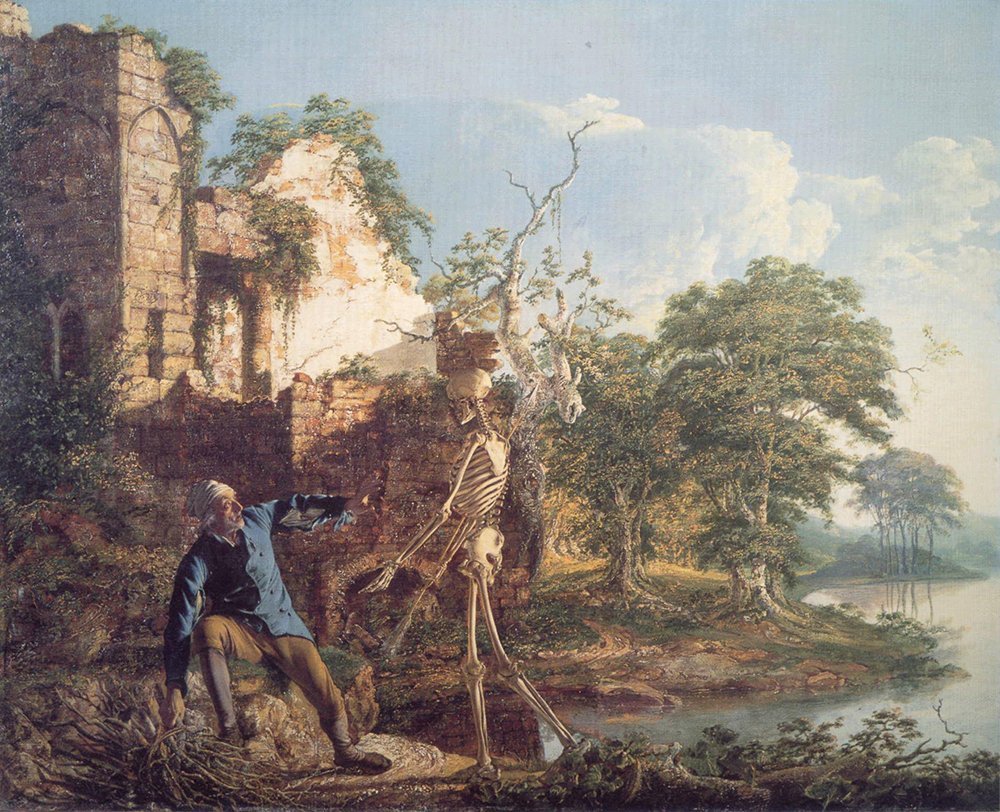 A virus, an entity in the grey zone between the living and the nonliving, has very rapidly undone much of global capitalism, a social formation in the grey zone between living and nonliving. Capitalism has always had a kind of undead quality—its practices long evoking the imagery of blood-sucking vampires, machines composed of dead labour, and mindless zombies of consumption—and the current structural crisis, virus triggered but decades in the making, lays bare this conjuncture.

The living/not-living power of cybernetic capitalism is today perhaps best exemplified by two hugely powerful and conjoined sectors: the tech titans and the fossil extractors. The former includes seven of the world’s top ten corporations by market capitalisation (Amazon, Apple, Alibaba, etc.). They gain their power through networked computing machines—cybernetic formations of minerals, plastics, electrified symbols and human appendages. While many other sectors crack under the shock of the virus, the power of the tech titans is increasing, for ‘social distancing’ is the business model: the more technologically mediated distance between us, the more possibilities to manipulate people’s practices, systematically encouraging increasing consumerism, extract profit and project power. Intensifying inequality is likely to be the big winner of this development. Amid millions of job losses, Amazon CEO and world’s richest man Jeff Bezos has capitalised on the disaster, opening up 100,000 new precarious jobs and even asking the public for donations to subsidise his employees’ wages. In the same breath, the company went about firing workers who dared to strike to demand that their employer take their health seriously. To clarify: this is a trillion-dollar company—which, incidentally, doesn’t pay any tax—asking for charity in a time of calamity, while at the same time engaging in vicious price gouging, such as charging Italians €30 a bottle for hand sanitiser. Such grisly practices are empowered by a system of non-living machines that enmeshes and organises the living.

The other exemplars of the nonliving/living nature of capitalism are the extractive fossil behemoths, currently occupying the top ten biggest corporations in the world by revenue, including oil and gas monsters such as Sinopec, Shell, Exxon Mobile, oil burners such as Volkswagen, and plastic pushers such as Walmart. Their power comes from digging up and burning the forests of the dead, hence casting the underworld over this world, with this undeath looming over the living in the form of atmospheric concentration and globally heating extinction. As many have noted, the coronavirus has led to a fall in carbon emissions, with entire sectors, such as aviation, sharply contracting. What is less known is that the greenhouse-gas emissions associated with powering data centres overtook aviation several years ago, and now ‘social distancing’ is intensifying the power usage of networked computing machines. It is little known that streaming one hour of high-definition video consumes the same amount of energy as running a refrigerator for two weeks. It takes tremendous amounts of electricity to run the vast ‘on-demand’ databases of audio-visual material (Netflix, etc.) and to transmit it around the world, let alone the energy, resource and pollution bill that goes into fabricating the hardware. The intensifying demand that the virus lockdown is putting on communication technology is setting the sector on the path to consuming half of global electricity production by 2030. The disembodied metaphor of ‘the cloud’ for systems of networked computing machines is entirely nebulous, yet its impact on the composition of the earth’s atmosphere is concrete.

Questions of embodiment are crucial to this conjuncture: the very ‘meaty’ origins of this particular virus can be traced to a wet market in Wuhan, China, a place where animals rendered as commodity, dead and alive—and at various stages in between—are offered up for consumption. The tapestry of flesh in such places have long spawned diseases, from both industrial agriculture—pigs (swine flu) and chickens (bird flus)—and from the exotic animal trade in bats (MERS), palm civets (SARS), and, it seems, pangolins (COVID-19). The transmission of diseases has been greatly intensified by factory farming and the expanding colonial frontier into wildlife habitats, with the chances of diseases spilling between species and transmitting rapidly. These diseases are a kind of by-product of industrialised agriculture, a colossal ‘externality’. In short, industrial agriculture greatly intensifies the chances of viruses spilling between species and spreading.

Once it had jumped to humans, the coronavirus spread from the manufacturing hub of Wuhan outwards at an incredible pace along the logistical corridors of trade and travel, transported by aeroplanes, guided by computing machines and powered by aviation gasoline. In this way, the trigger for the current cascade is playing out in the realm of embodiment, a politics of the flesh. This trigger is starkly different from the last major crisis of global capitalism, the 2008 Global Financial Crisis (GFC), for lungs filling with phlegm is far less abstract than credit default swaps or collateralised debt obligations. As a very intimate form of globalisation, this virus lays bare our relational nature, our shared vulnerabilities.

Furthermore, the pandemic-triggered crisis is distinct from other crucial moments in the ongoing structure crisis that has been deepening for the last half century, from the 1968 protests to the Third World debt crisis to the GFC, in that there is an immediate and direct threat to human mortality. Framed as a matter of life and death, it may prove to be more keenly felt, more existential. What’s more, it is not occurring in some distant elsewhere, but rather the spectacle has come home to roost; the pandemic plays out over an uneven distant everywhere. Understood in terms of embodiment and ecology, it connects sharply with the far larger environmental catastrophe.

To track and slow the spread of the disease, many places have employed elaborate cybernetic surveillance technologies, and indeed they arguably have a strong ethical mandate to do so. As has long been the case in the history of surveillance, the dynamics of projection and domination are often bound together, hence much care is needed to see these systems work in the public good, while scrutinising the draconian aspects. South Korea, ever the canary in the cybernetic coal mine, laid siege to the infection by using powerful systems of surveillance. Infected people were interviewed by the Ministry of Health and Welfare, which asked them about their movements in the days prior to their infection, and verified and patched up people’s stories through surveillance technologies: GPS data, CCTV-camera footage, credit-card histories and so on. This data was then posted onto public maps that showed almost everywhere an infected person had been, maps that synced up with apps that everyone was encouraged to download. These apps beeped with real-time and localised alerts—an infected person visited such-and-such a shop at whatever time.

In this climate, many of the infected have faced severe harassment online, with their de-identified data being easily re-identified, followed by the nasty vigilantism of online abuse and attacks. Seoul National University’s Graduate School of Public Health conducted a study of what scared Koreans the most: fear of the disease around them; that they may already be infected and not know it yet; or the criticism they might suffer if infected. The study found the last was by far the scariest. In this lies the ancient fear of social ostracism, massively intensified and enabled by a vast system of cybernetic control, a system I explore in detail in Arena no. 1.

The virus lays bare the extent of social decomposition. It is amazing how rapidly the Australian government’s stillborn catchphrases—‘jobs and growth’, ‘the surplus’, ‘a stronger economy’—lost whatever marketing spell gave them the illusion of life. Indeed, justifications for decades of merciless austerity disappear in a puff of stimulus as the whole social Darwinist dogma of neoliberalism is seeing its necrotic energies calcify. Recession, nay depression, seems likely, despite the G7’s solemn promise to ‘do whatever is necessary’ to restore economic growth. Those who benefit most from the decomposing status quo are ill-equipped to navigate a way out of the crisis in the longer term. This was seen after the GFC, when there was an ill-fated attempt to restore a late-twentieth-century notion of ‘normal’ through sewing up a broken, thoroughly corrupt and altogether zombified system of increasingly inequality, ecological toxification and fascist revival.

Radical social movements and the associated revival of socialism also emerged out of the grisly mire of the post-GFC. As the current crisis deepens, it is increasingly clear that things will not go back to the twentieth-century normality. As many are suggesting, capitalism, as we have known it, is on the brink. The key questions are: what will replace it? And how much of the biosphere will be dragged down as well?

It may be possible for another—even more undead—form of capitalism to replace the collapsing order. A system of cybernetic totalitarianism is already here; this increasingly grim and abstracted synthesis of monopoly capital, military-state power, extractivism and cybernetic control systems could tighten its grip, extensively and intensively, rendering most of humanity surplus and the planet a dead resource. There is no shortage of technocrats and billionaires scheming for a new round of accumulation, seeking plunder anywhere—including off planet—and at any cost.

A crucial aspect of the coronavirus crisis shows that there is no techno fix: collective action and solidarity are the most powerful practices. Building on this, it is also possible that an alternative, socially cooperative form of organisation may emerge, an organisation among people, across culture and within nature. Perhaps the care and compassion sparked by the virus, and the grassroots mutual-aid groups that have sprung up globally, can manage to organise solidarity into a durable counterpower. There is a deep need for radical experiments in human flourishing, worker-controlled production, deconsumption, critical and radical analysis and education, eco-agriculture, appropriate technology, cooperative self-provisioning, the ethics of care, the redistribution of wealth and power, and subsuming the techno-sciences to a deepened democratic control. Such movements are necessary in order to make concepts such as ‘sustainability’ and ‘democracy’ meaningful, lived concepts, redeeming them from their disfigurement by corporate branding exercises. As always, struggle is crucial.

In such a politically loaded time, it is plain that there is a need for serious, radical and critical analysis, and for this to work with practical actions and experiments in new social forms. It is equally plain that the carcass of mainstream media and corporate universities are unwilling and unable to fulfill their democratic function. Arena Online is launching into the strange times opening up before us, in all their horror and potential. It will be a place where radical and critical voices will respond in a more immediate form to topical developments. Its online nature will open it up to being engaged with through networked computing machines, with the whole realm of possibilities and limitations that come from this form. Here and elsewhere, we will engage in critical work to help navigate ways out of the bloated corpse of global capitalism and the techno-scientific power structures that animate it ghoulish form. Living in the midst of the Sixth Mass Extinction demands nothing less.

A brilliantly conceived and written article. Thank you Timothy E. Ström, for being a thought leader at the forefront of this incredibly challenging time and for all humanity.
Joy S.

English is not my first languge, I can not totally catch up with you. But some content you refered to the vast demand of electricity along with the outbreak of COVID-19, which refresh my mind. Looking forward to your update.
Doris