The Princeps and the Pauper 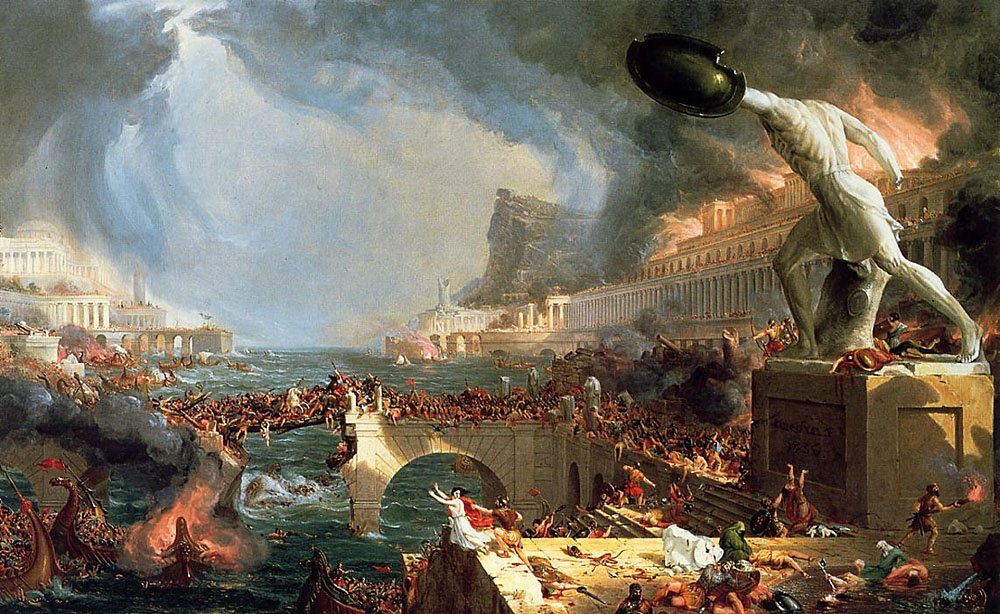 Cole Thomas - The Course of Empire

Reasons for seeing recent US history as an uncanny echo of the Roman Empire’s bumpy ride down history’s recycling chute are many. Most are partisan to one degree or another. America’s industrial muscle and snappy technological reflexes raised it to geopolitical pre-eminence after the Second World War, a second anglophone imperium, succeeding that of Great Britain’s sunset-free estate. But America’s uncontested time in the sun has proven brief. Those quick to dress America’s later-twentieth-century geopolitical acidità in toga-and-sandals drag often articulate different shades of postcolonial ressentiment and Schadenfreude, taking the nation’s serial foreign-policy disasters as a kind of nemesis, chastising the neocon hubris of the self-proclaimed ‘American century’.

From many different vantages, it’s a compelling analogy, but in the fast-forward ecology of screaming memes and wide-angle social-media hyperventilation, its finer details can get blurred, much of its force dissipated in the glare of the moment’s sensation. The past inflects the present in countless ways, but its influence can be both subtle and complex beyond the reach of common polemic. Let’s consider this Rome angle just a little more patiently and see what further implications suggest themselves.

The Roman Empire was born in denial. Just prior to the rise of the first Julio-Flavian emperors, the emperor-in-all-but-name Julius Caesar and his great-nephew Gaius Octavian, better remembered by his cognomen Augustus, the Roman polity still imagined itself a republic. Centuries earlier, in a legendary convulsion (roughly equivalent to the incident of the cherry tree in George Washington’s childhood or Paul Revere’s ‘One if by land, two if by sea’ lantern semaphore), Rome’s sturdy yeomanry threw off the yoke of tyrannical kings and set up shop under a form of self-government involving elected representatives and other officials formally responsible to the populus who, in theory, they served. Citizens of the new republic revered the figure of Cincinnatus, who early on accepted the office of dictator to steer the Roman republic through some of its birth pangs and resigned as soon as the crisis had passed, returning to his plough and the minding of his own business.

The republic turned imperial by stages.Some century and a half before the accession of Augustus to power, Cato the Censor declared to the senate, Carthago delenda est! Identifying the North African kingdom as a critical threat to Roman security, Cato anticipated Bush-era legislators who would bray as stridently for the deletion of al-Qaedaand its Hannibalesque Osama bin Laden. The fire-eating orators both of Rome and of America orated under the image of the fasces, the ceremonial bundled-stick shaft-and-axe-blade that served the Romans as a symbol of ‘united we stand’ solidarity [1]. So go we all. Rome’s forces made few nice distinctions between innocent and guilty parties among any population they felt needed corrective chastisement. Like its legions’ own self-administered punishment of decimatio, in which soldiers of an offending platoon would be lined up and every tenth man executed on the spot, random collateral damage seemed only to amplify what today’s managerial centurions would now call the policy’s ‘impact’. In their own time Americans have proven singularly resistant to acknowledging the imperial cast of their nation’s global hegemony. More simply, America, to Americans, means ‘the good guys’, by definition incapable of Rome’s brutal imperial swagger. Never mind the endless drone strikes and mounting body counts in developing nations around the world.

At the far end of the Roman republic’s history, Julius Caesar, who’d made a name for himself as a military genius in the provinces of Gaul and Britannia, returned to cross the river Rubicon, defying the Senate’s orders that he come no nearer to the centre of power. Those boni viri [2] feared that the cachet of his personal charisma might destabilise the due processes of the republic. Today he’d be an internet sensation, and the Rubicon, since become a byword for transgressing a legal or social sanction, has in fact been invoked as a hashtag by aficionados of Trump imperator, bidding him follow in Caesar’s footsteps. Though Trump so far faces only the legal rigours of impeachment, Caesar’s imperial pretensions so outraged republican sensibilities in certain quarters that he faced the drawn daggers of the Roman senate, even as he cultivated the adoration of the general populace. Rome descended thence into thirty years of civil war, which ended with Caesar’s designated heir Octavian elevated to imperial eminence.

Though his successors would in short order take up and burnish the imperial aura of divinity, Οctavian resisted at least the appearance of his great-uncle’s authoritarian populism. He could not stop his fellow Romans from tagging him as #ImperatorCaesardivifiliusAugustus (effectively, #EmperorCaesarAugustussonofthedivine), but he insisted on being addressed (to his face, at any rate) as merely princeps (‘first [citizen]’, with overtones of ‘first among equals’). Though he wielded his imperial authority with as much gusto as any of his successors, the spectre of Cincinnatus held self-aggrandising display in check.

Meanwhile, far from Rome’s restive mobs, coups and conspiracies, one of its remote provinces saw the advent of a very different figure who flew entirely under the radar of authorised history and chronicle. Reportedly a carpenter’s son from Nazareth (or from Bethlehem in Galilee, depending on which reports found you), he was born in the early days of the Pax Romana, as the rod of Augustus steadied the scenery and the empire dug itself in to govern the Mediterranean world (at least) for a long time to come. The carpenter’s son went on to become many different things to many different people during his brief tenure as an unfranchised, itinerant teacher. His contract was abruptly terminated after only three years, courtesy of Roman jurisprudence during the reign of Augustus’s son and successor Tiberius. Jesus taught a kind, charismatic Jewish gnosis that spoke from the cultural margins of that multiply alienated nation.

How unexpected, how off-centre and out of left field do you like your visionaries? His legacy has proven a sort of global Rorschach test, and readers of the texts his followers redacted from the dizzy whirl of stories that got told about him afterwards have, across two thousand years, magicked up an equally dizzy whirl of portraits, impersonations and appropriations. His image has proven almost infinitely malleable, never more so than when the faith that took him up as its saviour-figure eventually rooted itself at the heart of the world’s first very stable empire.

How did that happen? What irony was here! Rome resisted the first approach of this new Near Eastern mystery cult, whose ideals and sensibilities could scarcely have differed more from those of its imperium, counterintuitive and, to many Romans, simply perverse. Where Rome dictated, the church ministered. Its care for the poor, wayward and marginalised was an affront to Rome’s worship of wealth and aristocracy. Where Rome exalted itself, the church humbled itself. Rome ruled; the church served.

And yet, against all probability and likelihood, the new faith worked its way into the heart of the empire. Its converts spread their ideas among the slaves and servants of patrician households. Persecution and martyrdom only blew the flames higher, and, in time, irony trumped irony. In the early fourth century the emperor Constantine, following his own visionary experience, established Christianity as Rome’s official religion. It shed its unworldly hair-shirt, locusts-and-wild-honey-in-the-desert disposition and took on, strange to say, imperial regalia, reflected still in the vestments of a priest celebrating the Roman Mass today.

The Christ of today’s religious Right in America is a metamorphic figure whose different faces reflect Christianity’s changing fortunes across its long history. Evangelicals in the United States have always assumed a dissenting disposition, modelling their suspicion of established authority on their understanding of both the early apostolic church’s turn from normative Judaism and Martin Luther’s powerful questioning of Rome’s doctrinal authority. Their anti-Roman bias, inherited from later Reformation conflict with Catholicism, plays against the early church’s assimilation into imperial Roman culture. Yet contemporary politics can make for strange bedfellows: radical Protestant evangelicals often find themselves in common cause with Catholic right-to-life activists.

And so we come to our present moment, at which we have seen a cold collation (cold in its resolve, hot in temper) of pro-gun, anti-abortion, lib-baiting, QAnon-addled, fact-free, anti-republican Republican (go figure) banshees howling for the blood of cowering senators, representatives, and a vice-president, in the name of Donald J. Trump, America, and Jesus, in roughly that order. Merely to observe that ancient Rome and America have followed analogous trajectories of imperial decline captures a truth so obvious that its glare can overwhelm its nuances. The contradictions can be as telling as the analogies. How could the evangelical enthusiasts of the Right, who have been playing pin-the-tail-on-the-antichrist for donkey’s years, so totally overlook Trump’s obvious qualifications? During my youth as a campus Christian in the mid-seventies, most of us were pulling for Henry Kissinger. Not a bad call, but he’s hopelessly outclassed by the Donald. The lies. The puny gestures of token piety, aimed transparently at conning the rubes. The stone-ignorance of the Bible. The episodes of sexual predation. Yet after all the public exposure, self-incrimination and disgrace, he still can play the messiah to millions of evangelical voters. As Jesus warns in Matthew 24:24:

For there shall arise false Christs, and false prophets, and shall shew great signs and wonders; insomuch that, if it were possible, they shall deceive the very elect.

A shocking number of the elect remain passionately devoted to a figure who, only thirty years ago, they’d have dismissed as a worldly reprobate. What’s wrong with this picture?

The figures of Julius Caesar, Augustus and Tiberius dominated the affairs of the empire they ruled, and their influence can be traced in contemporary laws, mores and institutions that still bear their stamp. Yet that influence is a legacy, the leavings of regimes and the weathers that formed them, long since come and gone. The beliefs, institutions and habits of thought that shaped themselves around the obscure son of a Judean carpenter, on the other hand, remain a sort of live wire, a current that plays through the twenty centuries that stretch between now and then. Its galvanic discharges remain unpredictable¾stochastic and wayward; our only certainty is that they will play, a kind of St Elmo’s fire in the rigging of our ships of state, a pentecostal fire of uncertain import.

[2] In an antique register, the old Roman proverbsenatores boni viri, senatus mala bestia (‘the senators are good men; the senate is an evil brute’) plucks at the same threads of political indecency on recent display in Washington, DC.

Robert DiNapoli is a poet, translator, essayist and erstwhile lecturer on English language and literature. His books include A Far Light: A Reading of Beowulf (2016), Engelboc (2019) and the Reading Old English Wisdom: The Fetters in the Frost (2021).