The Moralism of Immoralism: On the Cultural Logic of ‘Sky After Dark’ 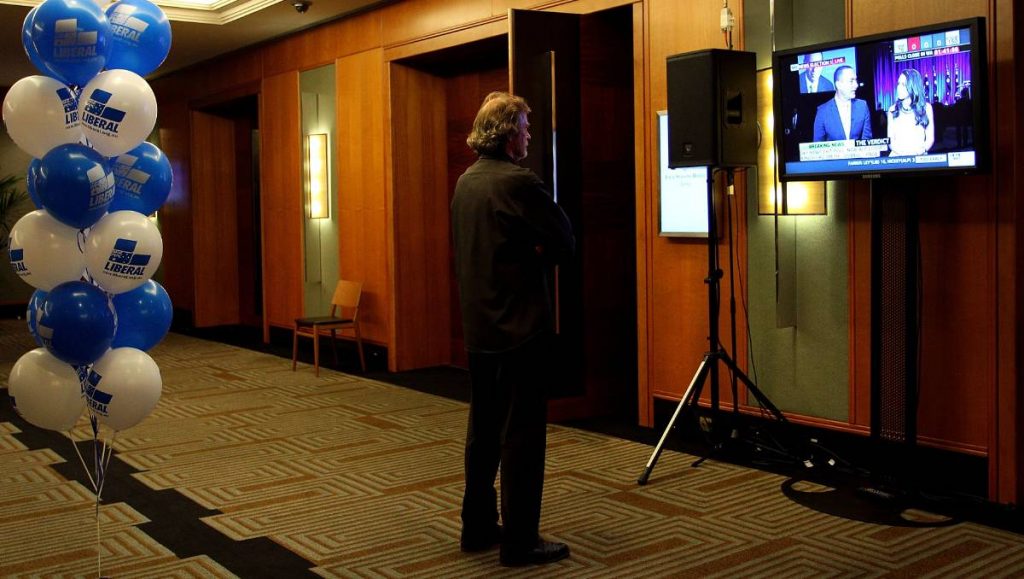 In the week following 20 May, I lay for a few days in a feverish Covid-induced state, listening to podcast postmortems of the federal election, turning at times for light relief to video clips from Sky After Dark (henceforth SAD). A highlight was a Paul Murray special, billing itself as ‘the first meeting of the new resistance’, the start of a thousand-day campaign to ‘take the country back from the mad left’: ‘It’s here, each and every night, at 8 o’clock; it gets stronger by the day, by the hour—and you are part of it’. All that was missing was the Che Guevara beret.

The last time I had watched SAD at any length was in a bar in Auckland a few years ago, trying to figure out what could have led a Kiwi publican, wanting perhaps to evoke a casual connected contemporaneity, to use as wallpaper what seemed to me the very worst of the Australian media. But the more recent exposure got me thinking about what SAD might have to tell us about the cultural-political period we have just lived through.

SAD must surely be one of the most overtly moralising shows on Australian Television. Murray, Andrew Bolt and Peta Credlin speak without hesitation about right and wrong actions, worthy and unworthy personages. They bring down judgement with a certainty that is almost impossible to find elsewhere. It is this, presumably, that affords its pleasures for those who watch. One can nod in wise agreement with a national congregation as each killer point or incendiary suggestion is made.

But there is also a paradox at the heart of the moralism of SAD: it is a moralism on behalf of immoralism. As anthropologists suggest, we often learn most about the core values of a culture by identifying its witches and demons—the figures that represent the worst sort of behaviour imaginable. In the case of SAD, the ritual condemnations are directed against those who dare to pretend that there is a moral basis for their actions.

We are not talking here about mere antagonists in the pursuit of power. The most prominent of the latter, the Labor Party, is presumed by SAD to be thoroughly cynical, appealing to moral principles only to gain political advantage. It goes without saying, for Murray, that the election of the Albanese government will be a ‘disaster for Australia’. But Labor is also an honourable opponent; it can be trusted, mostly, to play by the rules.

The real vitriol is reserved for those who advance moral arguments in ways that are not so easily interpretable. The longstanding bogey here has been the Greens, with their pious aspirations to ‘save the planet’. They have now been joined, however, by the so-called ‘fake independents’. The latter term appears to have been standardised by SAD before being taken up by figures such as Josh Frydenberg during the Liberal campaign. It has occasionally been varied by Andrew Bolt with ‘Simon says independents’, a reference to their campaign funding through Simon Holmes a Court’s Climate 200.

The charge of inauthenticity is central. The stated motivations of the Greens and ‘fake independents’—climate action, integrity in government, gender equality—have all been framed in explicitly moral terms, obscuring any immediate material advantage to be gained by those who put these ideas forward. It is this, for SAD, that is intolerable. It is this that must be hunted down, put on trial and denounced.

Why bother trying to get inside such a perverse phenomenon? As Margaret Simons has pointed out, the audience for SAD is fairly small—somewhere in the region of 70,000 viewers, compared to estimates of more than 300,000 for the ABC’s Q&A. It is tempting simply to leave them to their strange esoteric obsessions.

An obvious response to this might be to point to the political influence of SAD. A case could be made that it significantly shaped the philosophy of the last government. It might be objected that Morrison regularly gestured to ‘values’, particularly those he attributed to the so-called ‘quiet Australians’. Surely the government did not quite align then with the SAD contempt for moral claims?

Nodding to things can, however, be a way of neutralising them. Morrison recognised values only in a strictly limited sense of privately held beliefs having no relation to public actions. The moment the line between private and public was breached, any halo of ‘quietness’ was stripped from the Australians in question. It is at this same moment, to preserve the faith, that material interests had to be ascribed.

There is a lot that is genuinely puzzling about the Morrison government that becomes clearer when seen through this lens. Morrison was widely viewed in the press gallery as ‘pragmatic’, and there is certain evidence to support this. He blithely overcame the conservative obsession with fiscal rectitutude during the pandemic, for example, cheerfully shovelling out tens of billions in government support. Why, then, could he not bring the same flexibility to other questions—women’s issues, the integrity commission, climate—instead leaving himself so fatally exposed?

If we see Morrison as a disciple of SAD, the answer to this question is clear: he was no pragmatist at all. His worldview might be more accurately described as a kind of fundamentalism of competitive material advantage. The difference may seem elusive, as pragmatism is generally associated, precisely, with attention to the baser realities of money and power. But when competition over the latter is attributed with a reality excluding all others, they separate out in quite profound ways. The material becomes no longer a means to an end, but the One True Way.

In my Covid-fever, however, I had a further and more troubling thought: what if the cultural logic of SAD runs deeper still? What if our fascination with the phenomenon—which extends I think even to those who loath it—is because there is a little bit of SAD in us all?

There are clearly major crossovers between SAD and progressive thinking. It is not just Murray’s revolutionary posturing that has been raided from the dress-up box of the Left. The whole formation is woven through with odd, repurposed fragments of Marxist class analysis and theories of ideology. In purely formal terms, the dominant line in SAD is probably more Foucauldian: it is not the forms or agents of power that are important so much as the conviction that all social relations are relations of power. It is the latter that is the real mark of faith.

Another important crossover is in the sociological imagination that accompanies these ideas, especially in relation to those processes that progressives have liked to call ‘neoliberalism’. In a post-election piece in Crikey, Guy Rundle asks what meaning Anthony Albanese’s life story, inspirational perhaps in earlier times, could have for those who inhabit the atomised social worlds that these processes have bequeathed. How can those from the progressive establishment ever hope now to reach places ‘where people … feel excluded, unserved, unable to connect with power or the means to get it, where there’s no point talking about coming up from public housing because there is none’?

There is a close symbiosis between the atomisation thesis and the cultural logic of SAD, for what other relations can pertain between social atoms than ones that are narrowly transactional? In an earlier pre-election piece, Rundle speculated that mainstream pundits may again have missed a ‘silent, emergent counter-power’ to the apparent progressive ascendency, an unseen tide that might yet sweep the Coalition into office.

Who, on the progressive side in Australia, can deny having entertained such a nightmare? Much of the power of SAD has been in stoking a kind of Stockholm Syndrome among those who wish to oppose its logic, a despairing acceptance that in the end they are destined to lose. But this is also the point, it seems to me, where we might push back more forcefully than has been possible for quite some time. For elections are moments of truth and the silent, emergent counter-power simply did not in the end materialise.

Let me finish then with a suggestion: the atomisation thesis, in Australia at least, has been overstated; the social imaginary associated with it is now substantially overblown. This is not to deny a tragic and pervasive phenomenon of loneliness, disconnection and alienation in the wake of the economic and social restructuring of the last half century. The 10 per cent combined vote at the election for Pauline Hanson and the United Australia Party undoubtedly tells a story. But it is time that a counter-narrative is also told.

Albanese’s single-mother, public housing upbringing may be better starting point than it seems—if at least we can strip it of a certain sentimental overlay. The council flat was not assumed in the mid twentieth century to be the warm hearth of government provision that Albanese himself tends to imply. It was indeed regarded by many as a cynical and soulless substitute for the urban working-class communities that were at the time being destroyed. The latter, in an earlier era, had been tagged as soulless too, indifferent heaps of humanity thrown together during the process of industrialisation from uprooted fragments of older, rural communities.

But the fact that, in each case, the social worlds inhabited by earlier generations can be seen as warm should suggest to us that those of the present might one day seem so too. Human beings are extraordinarily adaptive, creative and resilient. Without wanting to be complacent about it, the evidence of 21 May suggests that new connections from within the rubble of neoliberalism may already be forming. If they are, then the voices of SAD may already be shouting in the wilderness.

A Light Shining in the Shire

The last decade has seen the failure of the centrist form of neoliberal progressivism that occupied the left parties in the face of an onslaught by right-wing populism, which mobilised forces old and new to present themselves…as a response on behalf of the people against the entire ‘political/media’ class, as represented by those in power.

is a writer and researcher on cultural economies and Associate Dean Media at RMIT. He is currently completing a co-authored book on crossovers between ‘fringe’ and ‘mainstream’ cultural production in Australia.