The imminent crisis of mind 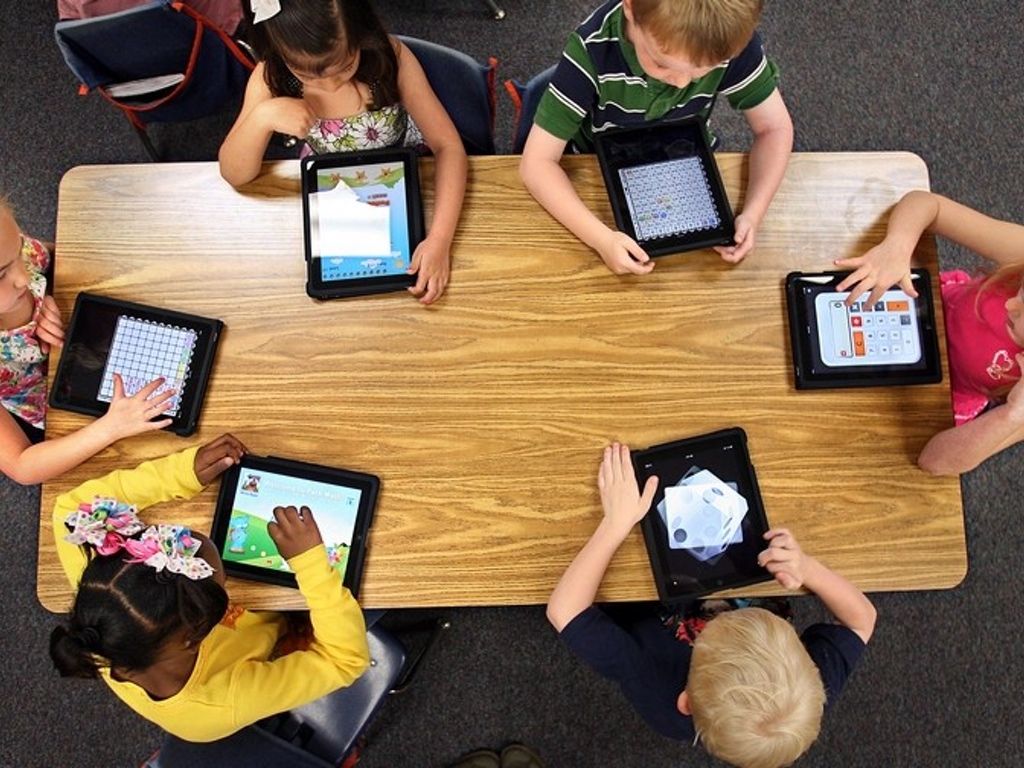 The other day, a small child in a buggy in front of me, waiting with his mother in the queue for the checkout, was swiping images on the screen of an iPad. At a guess, the child was about eighteen months old. As an educational researcher who regularly visits primary schools, I continually hear from early years teachers that parents are generally on their mobile phones as they drop their children at school, whereas a decade ago they would have been talking to their children. Does it matter that the child in the buggy was absorbed in viewing images on a screen, or that parents might not say goodbye to their children as they get out of the car on their way to school?

While the child in the buggy may have been acquiring implicit knowledge of the semiotics of visual images, his engagement with the digital device effectively dislocated him from his immediate social world. He was oblivious to linguistic signs and symbols and what they might mean. He was oblivious to the people around him: their movements, gestures and expressions, which denote mood and states of being. He was also oblivious to objects and space and how these were juxtaposed in the physical environment. And, there was no conversation between him and his mother, and little chance he might ask questions about the world around him. Meanwhile, as James Bridle elucidates, ‘algorithmically optimised systems…hack into the brains of young children’.

Research in the 1980s (1) revealed not only that parent-child talk was important for language development—a point that might seem quite obvious, given that language is a socially acquired trait—but that child-initiated talk was a vital component of good language development.[i] Allied to this was the finding that conversations where parents and children spoke for roughly equal amounts of time, and that involved discussion of things that could be seen in the immediate environment, resulted in children who were more advanced language users in their later schooling. Through conversation children acquire implicit knowledge of how their language is structured; they acquire new vocabulary and they learn how to use their existing repertoire of words to make unique statements. There are also pragmatic aspects of language that are learned through dialogue, including appropriate eye contact, turn taking, how to read body language, asking questions and seeking clarification, keeping to topic, and matching their use of language to the context and person with whom they are speaking. Parents and other adults can make significant contributions to children’s learning, but the consequences of all this not happening may be becoming apparent.

Teachers across multiple settings are reporting much the same thing: that young children are now starting school lacking the level of oral language of their counterparts a decade ago. They are also lacking other prerequisite skills, such as gross and fine motor coordination, as well as core body strength. Studies show that children today are playing outside less than their parents’ and grandparents’ generations.[ii] Active play, such as running, climbing and throwing, is required to develop motor skills and core body strength. Two major reasons are given for the decline in outdoor play: increased screen time and parental fears about ‘stranger danger’ and crime. COVID lockdowns will undoubtedly have contributed to the problem and in the immediate future we need to make sure that children are given extra time to play.

Teachers’ explanations for what seems like a generational decline in oral language is the mobile phone, or rather that adult behaviour with the mobile phone is proving to be a conversation blocker. While digital devices have opened up the disembodied world, and have accelerated the flow of information across the globe, the paradox may be that they simultaneously cause us to restrict our interaction with the immediate world and the people who are closest to us. How often do we see groups of friends sitting at a table in a cafe or restaurant silently engaged on their mobiles, or people walking down the street, necks craned over their device? Increasingly for many people, the mobile phone is becoming, or has become, an ever-present Pavlovian trigger, resulting in nomophobic conditioning.

Early years teachers explain that children now need remediation to develop what were once taken-for-granted skills and attributes, which postpones the acquisition of more age-relevant physical, linguistic and behavioural skills. Ironically, at a time when young children seem to need more school time devoted to oral language development and outdoor play, there is a drive from the current government and neoliberal think tanks to implement teacher-centred direct instruction as the main mode of teaching, along with increasing use of digital technology, with programs based on behavioural pedagogy that require simple non-verbal responses from the child. Direct instruction often involves students sitting for long periods, listening to the teacher and using limited language to answer teacher-initiated questions or repeat pre-written formulas. This mode of learning reinforces passive, receptive language skills, rather than the kind of active, productive language required  to foster comprehensive language development and deep thinking.

What might these observations be telling us about the possible current and future state of young minds, and what do they suggest about the pressures on teachers and schools of the socio-cultural and cognitive ramifications not only of the digital society but also of the political promotion of education depleted of creativity, collaborative talk and critical thinking?

Anecdotal reports do not provide hard evidence, but if professionals with decades of experience are all reporting the same phenomena, there is a need for systematic research to investigate the extent of any problem, delineate its consequences and make recommendations for ameliorative action  Sociocultural theories of mind investigate how human actions, cultural tools and social settings interact to influence mental functions.[iii] The theory demonstrates how mind is not confined to individual psychology but is also socially constructed; in other words, the way we think, as well as the individual’s cognitive processes, arise out of repeated social and cultural behaviour, behaviour into which young children are enculturated as social beings.

If mobile phones and digital devices, but more importantly the algorithmic networks that keep people hooked, are dominating important aspects of parent-child, social and cultural behaviour, especially in relation to the physical, linguistic and cognitive development of children, there is a social and political imperative to identify the harmful consequences. Ameliorative action needs to be equally socially oriented because the politics of ‘the marketplace’ always relegates responsibility to the level of the individual. However, as the COVID pandemic has demonstrated, the welfare of a population is best served by people taking collective responsibility and coordinated collective action. As we have seen, neoliberal governments are incapable of enacting responsible collective action because that is ideological anathema to them.

What is required is government that adeptly constructs public policy that puts community and communal action first, one that is able to curb the influence of big tech, and one that promotes education as a socially collaborative and dialogic activity.  The alternative is the current path to an imminent crisis of mind, a state in which individuals lack the cognitive stamina for deep, prolonged study and thinking, because concentration has been reduced to an optimum three minutes, and memory dissolves when the next image appears. This combination could lead to large sections of the population becoming more malleable, easily controlled and residing in a disembodied cultural meta-world of AI click-bait. We need to thoroughly reorganise how mobile technology is practised so as to preserve purposeful social interaction in immediate settings, including quality parent-child talk and interactive, discursive learning behaviours in both the classroom and in the community.

The paradox of teaching then is that teachers are attempting to create contexts for students to think for themselves, to stay sane in an age of division while operating within an institutional structure designed to create compliant and obedient workers, a goal that is continually reinforced by the state for neoliberal purposes.

Sit for a while in the food hall of a busy suburban shopping centre during Lunch Hour (Around midday). Watch the expressions on the faces of the young ones in strollers, their eye contact with their mum’s eyes, and body, blocked by a canopy laden with goodies…
The young are all alone, surrounded by strange sights and strangers, many rushing towards the youngster, passing them close…
What’s the expressions you see ? Wonder ? Awe? Delight? or frozen terror, near-blind frozen panic… Abandoned, alone kids…
Watch as the youngsters twist their necks, contort their little bodies as they strive for sight of their mums (or minders). They know mum is There. They can hear Mum’s voice – as she talks to her companion about (food, commodities in the shop window or gossip) – or she’s talking into that little black box she always, lately, holds close to her ear…
What does a young organism do when it reaches out – and there’s no reciprocation ? It doesnt retreat or shrink. it closes down, stops reaching out… Those whose mum is always talking to others on a ‘phone will eventually get their own ‘phone, it being the main way to get it’s mum’s attention… (Cyborgs.)…

Autism was hardly ever heard of before the 1970-80s. One who reported some success in treatments of autism was psychoanalyst Bruno Bettelheim. But Bettelheim was “debunked”, his ideas “debunked”. There was no place for him in the Diagnostic & Statistical Manual (of Mental Disorders) which claimed for itself the Authority to create categories and labels, categorise symptom, and list the drug treatments from among the cornucopia of pharmaceutical drugs that had become available.
Coinciding with the heavy reliance on drug “treatments”, Autism became an ever expanding catch-all term for any/every type of “cognitive impairment’. It became very Politically Incorrect to refer to the impairment as “Brain Damage”, for such begged the question “what is the cause of The Damage ?”, and as another coincidence was the increasing number of injections the very young were being subject to, the injections might have been seen as A cause of the growing incidences of Autism…

One thing that can be said of the child in the stroller struggling for the comforting support of its mother, and not getting it, is that it will be at home in a world in which anti-social distancing is the norm.