The full truth of the past: native title and the Yoo-rrook Justice Commission 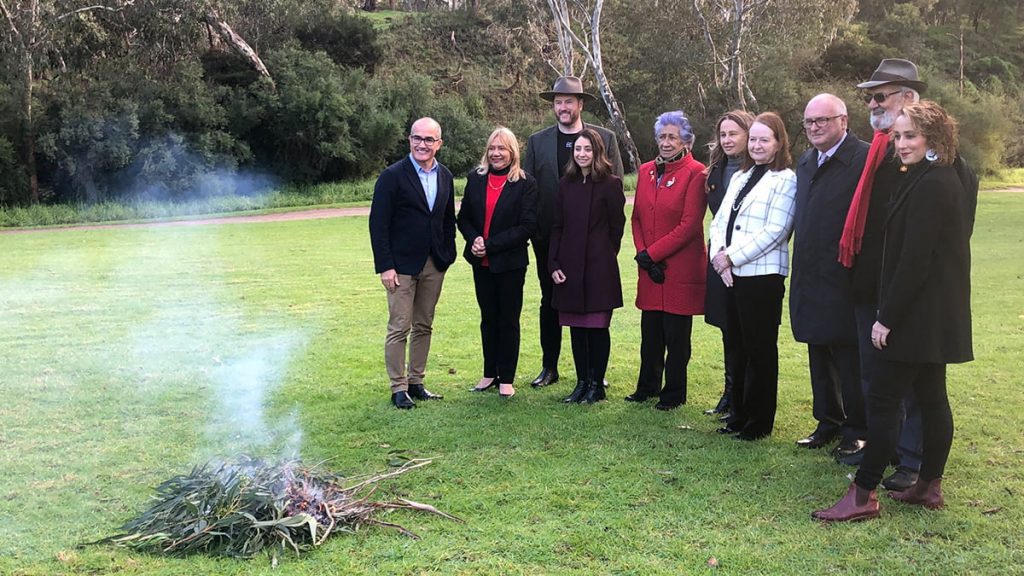 Hearing First Peoples’ stories and acknowledging the truth about their experiences is essential for the healing and justice for First Peoples.

Truth-telling has taken many forms: The Royal Commission into Aboriginal Deaths in Custody; the Bringing Them Home Report; the Referendum Council’s Final Report; The Royal Commission into the Protection and Detention of Children in the Northern Territory; the Wiyi Yani U Thangani (Women’s Voices) Report; and the ongoing parliamentary Inquiry into the destruction of the 46,000 year old caves at Juukan Gorge. These various commissions, inquiries and committees can be considered truth-telling processes. Indeed, other national events such as the 1988 Bicentennial March in Sydney and the Barunga Statement are steeped in notions of telling the truth of, and seeking some form of justice for, Australia’s past. Other documentary and literary contributions have also investigated the idea of Australia’s true past, including John Pilger’s documentary film Utopia, Bill Gammage’s The Biggest Estate on Earth, Henry Reynolds’ The Other Side of the Frontier and, recently, Bruce Pascoe’s Dark Emu. These ideas are often vehemently contested, such as in  Peter Sutton and Kerryn Walshe’s Farmers or Hunter Gatherers?, where the authors counter assertions made by Pascoe in Dark Emu that Aboriginal people were agriculturalists. Yet despite these various processes and contributions, it stands that many Aboriginal and Torres Strait Islander people continue to feel that a coordinated, resourced and consequential national truth-telling process is needed to establish the facts of colonisation and capture the experiences of their peoples, communities and societies.

In 2018 the Victorian government passed Australia’s first Treaty legislation, the Advancing the Treaty with Aboriginal Victorians Act 2018. A key mechanism in this legislation was the creation of the First Peoples Assembly of Victoria (the Assembly). In June 2020, the assembly called upon the Victorian government to work towards establishing a truth and justice commission, which the government then committed to. In March 2021 the Yoo-rrook Justice Commission was formally announced, followed by the appointment of five commissioners to oversee the inquiry, as well as the letters patent that outlines the commission’s mandate.

Across seven pages, the Letters Patent offers what I would describe as extraordinary freedom for the commissioners to investigate, discuss and report on the historical events, experiences and ongoing impacts of colonisation on Aboriginal peoples in Victoria. Evidence of this scope can be found throughout the letters patent, in particular item 3.g in the terms of reference, which states:

But it is not only the specific wording that is important; the genuine, open and brave tone in which it is written is striking. The letters patent create an atmosphere of goodwill and freedom for the commissioners to undertake their work. And yet there is one item that jumps out, like a lemon growing on a peach tree, seemingly not belonging, and running counter to overall sentiments.

Highlighting the conduct of the inquiry, item 4.m states that the inquiry must:

Not inquire into, or report on, any executive decisions or specific outcomes made in legal proceedings which have been settled or determined in relation to the recognition of Traditional Owners, including but not limited to those under the Native Title Act 1993 (Cth), the Traditional Owner Settlement Act 2010, or the Aboriginal Heritage Act 2006.

Formal recognition, most popularly known and understood through federal native title, is a complicated and controversial suite of regimes. Since its introduction by the Keating government in 1993, and through Howard’s amendments in 1998, native title has produced a mixed bag of outcomes for various Traditional Owner groups throughout Australia. The same can also be said of the Victorian formal recognition regimes, including the Traditional Owner Settlement Act 2010 and the Aboriginal Heritage Act 2006.

One of the early test cases in native title included the Yorta Yorta claim in northern Victoria. In that case, Justice Olney rejected Yorta Yorta people’s claim of native title due, in large part, to controversial interpretations of ‘tradition’ in Yorta Yorta society. Justice Olney determined that Yorta Yorta people had been dispossessed of their lands and waters by British settlement and that their culture, laws and customs had been ‘washed away by the tide of history’. This decision, and ensuing appeals, caused immense trauma, grief and anger for Yorta Yorta people. It is worth noting that one of the five Yoo-rrook commissioners, Dr Wayne Atkinson, is a Yorta Yorta Elder, and was involved with the original native title claim and subsequent appeals. But it is not only negative decisions such as the Yorta Yorta claim that have caused immense grief in Victorian Aboriginal communities.

The Victorian Government Traditional Owner Programs Team undertook consultation with Aboriginal groups in Victoria who are yet to be recognised through any of the formal recognition regimes. This consultation process and the voices of Traditional Owners without formal recognition can be read in the report ‘To be heard and for the words to have actions’ (Voices report). The trauma arising from lack of recognition was a significant finding from this process:

Participants across all regions commented on the harm and trauma associated with formal recognition processes.

Importantly, the report indicates that it is not only Australian governments and legal processes that have been the cause of this trauma, but other Aboriginal groups. For instance, the report highlights the trauma caused where positive determinations of Traditional Ownership have been made over areas of land or water that remain contested. It also points out the deep hurt felt by groups who believe they have been disadvantaged by other Aboriginal people. The report states:

Some groups also feel that people sitting in influential, decision-making positions about formal recognition processes are those who have benefited from these processes.

It is clear that there is not one experience of formal recognition in Victoria, but many. It is also clear that many of these experiences have created complex and layered trauma. It is difficult to understand, then, why such an essential lived experience, and the foundation for many Aboriginal groups’ political and economic institutions, would be explicitly disregarded by the Yoo-rrook Justice Commission.

Why wouldn’t the commission inquire?

It is understandable and completely reasonable that there may be details of land claims and determinations made under any or all formal recognition regimes that are, and must remain, confidential. The dredging up of old matters that may have taken years or decades to resolve would be in no one’s best interest. It appears, though, that the creators of the letters patent have, in their desire to avoid opening old political and legal processes, created an additional risk for the commission.

There are also legitimate concerns regarding the commission’s ability to conduct a thorough and in-depth inquiry given the shrinking window of opportunity. As it stands, the Yoo-rrook Commission is due to hand down an interim report in June 2022, with its final report due in June 2024. Formal recognition is complex and, in many regions, remains unresolved. Given it is a contemporaneous issue, navigating these truth-telling conversations may have added complexity.

But formal recognition is not the only contemporaneous issue mentioned in the letters patent. For instance, the terms of reference instruct the commissioners to inquire into:

3.a.x – invasion of privacy and the collection, possession and use of information and data about First Peoples…

3.b.vi – any other ongoing Systemic Injustice considered appropriate by the Royal Commission.

Any other ongoing matter except formal recognition, it would seem. While native title and formal recognition are complex, so are issues of data. The inclusion of data and the generous provision to inquire into ‘any other’ matters implies that the complexity and contemporary nature of issues are not a limitation.

There may also be added complexity of inquiring into native title as a federal regime within a Victorian truth-telling inquiry. But this is negated by item 4.l of the letters patent, which permits the commission to establish appropriate arrangements to engage with persons or institutions outside of Victoria, including federal institutions.

Considering these factors, one may reasonably speculate that the deliberate and targeted exclusion of formal recognition and in particular, native title, in the Yoo-rrook Commission is political.

Inquiring into formal recognition is essential

Item 4.m of the letters patent creates a substantial risk to the Yoo-rrook Justice Commission.

As they are currently worded, the terms of reference (section 3 in the letters patent) clearly instruct the commission to ‘not inquire into, or report on…’ formal recognition processes.

I ask people close to the commission to consider what may happen if in a community meeting or family gathering people express a desire to share their experiences with formal recognition processes, only for the commission to advise that it cannot inquire into, or report on, these experiences. Although I cannot be certain, I expect that this would not be well received.

The recently released Tyerri Yoo-Rrook (Seed of Truth) report confirms this. Although the report makes no specific mention of formal recognition or native title (which is curious in and of itself), it does highlight the expectations of community regarding the Yoo-rrook Commission. The report outlines that there are expectations that the commission will consider:

State imposed laws or policies that contributed to or perpetrated structural and systemic discrimination, including through limiting recognition of First Peoples.

Simply put, this expectation cannot be met without considering formal recognition processes. The likelihood of formal recognition being an issue of significance to Aboriginal people in Victoria in the context of the Yoo-rrook Commission is more than possible—it is certain.

For Aboriginal people, formal recognition and, in particular, native title cannot be consigned to the margins or made invisible in the pursuit of truth and justice.

At best, this caveat would mean the commission could not capture the full experience of Aboriginal people living in a settler-colonial world. At worse, it risks further alienating large parts of the Victorian Aboriginal community and deepening the trauma that already exists. This runs counter to the commission’s instructions outlined in item 4.g of the letters patent:

Adopt practices and approaches to minimise harm and re-traumatisation of First Peoples.

Whatever the outcome with community, the findings of the commission and its final report will be incomplete if the commission does not consider the impacts of formal recognition on Victorian Aboriginal peoples.

Item 4.m is clearly in need of removal, or substantial revision.

Although still in its formative stages, the Yoo-rrook Justice Commission is shaping up to be a landmark inquiry. As Australia’s first formal Truth and Justice Commission, it will set a benchmark for inquiries of this nature in other jurisdictions, including nationally. It is essential, therefore, that the Yoo-rrook Justice Commission is a success. This success must be measured in different ways, including through the therapeutic interventions it provides to a people, or peoples, who have been smashed through colonisation, including asking vital, if uncomfortable, questions about the impacts of formal recognition processes. The full truth of the past, and the present, depend on it.

Treaty: All ship, no cargo

I can’t help but be disappointed that we find ourselves some fifty years into a Treaty movement, and in the middle of various concurrent Treaty processes, and yet we continue to lack a vision for an outcome or outcomes.

Bhiamie Williamson is a Euahlayi man from north-west NSW with familial ties to north-west Qld. He is a PhD candidate and research associate at the Centre for Aboriginal Economic Policy Research, Australian National University and a director of Country Needs People.