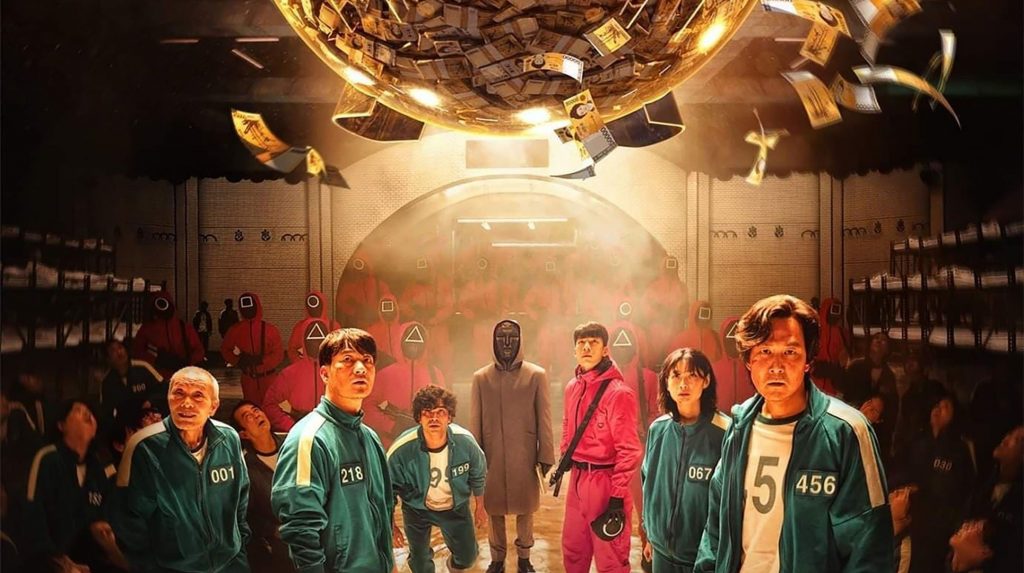 Pier Paolo Pasolini’s film Salò seems like an odd place to begin, but I believe that the vision of society portrayed by Pasolini comes close to what director Hwang Dong-hyuk attempts and fails to achieve in Squid Game. Salò or The 120 Days of Sodom (1975) is an adaptation of the Marquis de Sade’s 1785 novel. Pasolini’s filmattempts to transpose some of Sade’s ideas into a meditation on capitalist society. Pasolini recast the Sadean narrative into a critique of our own epoch; the reign of late capitalism serves to reproduce earlier forms of subjection, but in the guise of the spirit of freedom and individual merit.

Squid Game is the most popular Netflix series yet. It had 111 million views within the first month of its release in September this year. The series, inspired by Kinji Fukasaku’s Battle Royale (2000), is modelled on the survival-game story. The most well-known iteration of such a story is the Hunger Games franchise. Critics assert that Squid Game is metonymicas a presentation of the model of life known by most human beings in the twenty-first century. Could this virtual entertainment complex for the masses (Netflix)have produced something that won’t fade from public consciousness within a month? Should we consider Squid Game serious ‘content’? Or is it well-marketed, but ultimately empty and algorithm-based ‘content’?

Others assert that Squid Game is a document of the dystopian reality of our present—not an imagined future possibility but the actual concrete conditions of people’s lives under the capitalist world-system, so confident in its hegemony that it does not bother hiding its cruel face behind a mask. ‘The game might be a secret, but the equivalent brutality of the outside world is not’, writes Francesca Newton in Jacobin. As much as we crave something rich with critical insight to sink our teeth into, Squid Game is a botchy document of our contemporary social and economic predicament. The exploitation of migrant workers is about more, God help us, than an Afghan holding a Korean by the scruff in order that he does not get shot in the head by a giant robot child (this happens in the first episode). So the system that pits us against each other in ruthless competition and then justifies it as meritocratic is fundamentally inhuman, unfeeling, pathological. OK. But Squid Game does not provoke genuine anger at a system that dehumanises and demeans the victims of its own logic. Does it help people to see clearly that something must be done? Or is it just about making money?[1]The COVID-19 pandemic has been good for Netflix, which doubled its profits in 2020. After a rough first quarter due to a slowdown in production output, the company may well need Squid Game to attract … Continue reading The film industry is an ‘industry’ after all—it is about making money. The estimated value of Squid Game is $900 million. Back to the ‘content’ vs ‘content’ question: people are already having their own Squid Game challenges, and creating funny memes and videos, some that involve getting shot in the head, BANG!, like that, splat! Just have a look at Tik-Tok. Very funny, no?

How about the value of Squid Game as an allegory? The central character is a dishevelled bum who can’t get his act together to save his own life (pun intended!)—we learn that he was unfairly laid off some years ago and depends on his elderly and sick mother for support. As for the other characters, they are mostly annoying, dull-witted, suspect and low, pure embodiments of the neoliberal imaginary of the poor. Squid Game contestants cannot separate or distinguish their lives from the prize money because each death corresponds to cash dropped into a giant piggy bank. The allegory of human life reduced to fungible value is there. As Rilke once said, an individual death might be as rare as having a life of one’s own.

The contestants in Squid Game have been hand-picked by a team of anonymous employees of the old puppet master (who participates incognito in the games because, he explains, the spectacle is fun to watch, but to be one of the players is thrilling). For the elite punters, their wealth has made them insensitive to life. The series depicts a class of bored libertines who use the sovereign power of their wealth to do whatever they want for entertainment, like gods. But what about the vulnerability of poor people and migrant workers living precariously and diminished in their humanity because of a life of constant financial strain and pressure? People who are pursued and threatened by loan sharks, and who take out loans just to make it to the end of the week? Now, that would have been social realism. Maybe you can’t berate someone for what they haven’t done, but it seems that it’s the things that aren’t there in Squid Game that are the important ones.

The series is clearly characterised by too much action rather than adequate investigation. Hwang Dong-hyuk omits explanations, and instead the camera involves the spectator in other aspects of knowing and seeing. Take, for example, the slit throat that appears in aggressive focus in the second-last episode after a contestant is pitilessly murdered as she lies suffering like a wounded sparrow on her death bed. Think of all the expressive possibilities! Or at least all the different ways one can murder one’s neighbour, wife, best friend. In the director’s attempt to evoke empathy, the techniques of the camera produce a vulgar contamination. A camera shot of a bullet to the head, or brains spilling from a shattered skull, followed by a shot of a surviving character’s face expressing something like terror and profound suffering. The images we consume are drained of affect. The spectator is fascinated but not moved.[2]The unreality of the image, as Adorno and Horkheimer have argued, ‘the absolute equivalency of all the contents stripped of their reality ensures the universal fictionality of anything shown and, … Continue reading Moreover, the spectator comes to expect these images. They become predictable because the director obsessively indulges in them. The result is boring—really boring, to the point where the entire series becomes boring because it is nothing more than its surface: expensive and elaborate sets, special effects, $2.4 million in production costs per episode.

It is understandable that the games are held on a remote island. This is a characteristic motif in Sade’s novels, which are set in secluded castles, forests or underground cellars—a metonymy for the absence of God, law, morality—where the play of destruction is unimpeded by social imperatives based on mutual recognition of the other’s subjective individuality. In Sadean society, nothing obliges a person to sacrifice one’s own happiness in order to preserve others. Under this system, faith in the virtuous qualities of humanity, such as love, benevolence, charity and justice, make one a victim—or in Hwang Dong-hyuk’s series, a ‘loser’. It is true that the libertines who are the sovereign masters of Sade’s novels are punished just as ruthlessly as anyone else on account of such lapses in judgement. Hwang Dong-hyuk is right: allowing human sentiment to govern one’s actions is a most foolish error.

The poor characters are recruited to the games because they are in an impossible situation of bankruptcy and unjust social immobility. They will do anything for an exit, a way out, a chance for a better life. This is the universal dream of poor people. If wishes were horses, beggars would ride! ‘Listen carefully’, says the protagonist, ‘I’m not a horse. I’m a human being’. Hwang Dong-hyuk does not investigate. If he did, he might be able to discover the grounds for the brutality of this existence; in the absence of investigation, he has nothing to say about it. What is the real face of economic inequality in South Korea? The debt crisis provides a cheap explanation as to why any human being would willingly enter and remain in that Hell of all against all. One might observe, at risk of being called a moral panic–monger, that the series is dangerous with its fatalism, its cynicism. Squid Game is a document of the times, for the limited time of the next few weeks, and without documentary value.

…the acceleration of net worth enjoyed by the digital czars is unlike anything history has ever seen: Musk’s net worth increased by US$25 billion in a single day in March 2021.

Catherine Papadopoullos teaches at the Australian Research Centre in Sex, Health and Society.

There was the context of the main protagonist in Squid having a back story (as reveal in later episodes) involving PTSD and impoverishment on account of prior violent South Korean car factory strikes over a decade ago, an event with significant worldwide coverage at the time and was a precursor to the later GFC.

This and Korean pop culture emerging in the west to take some social commentary away from the US makes it interesting, even though the show is not exactly prescribing revolution as this article pains itself to highlight. As a netflix series, its not exactly what we are demanding from it anyways.