Editorial: Speaking Power to Truth: Trump’s Contradictory Strength and the Possibility of a Coup 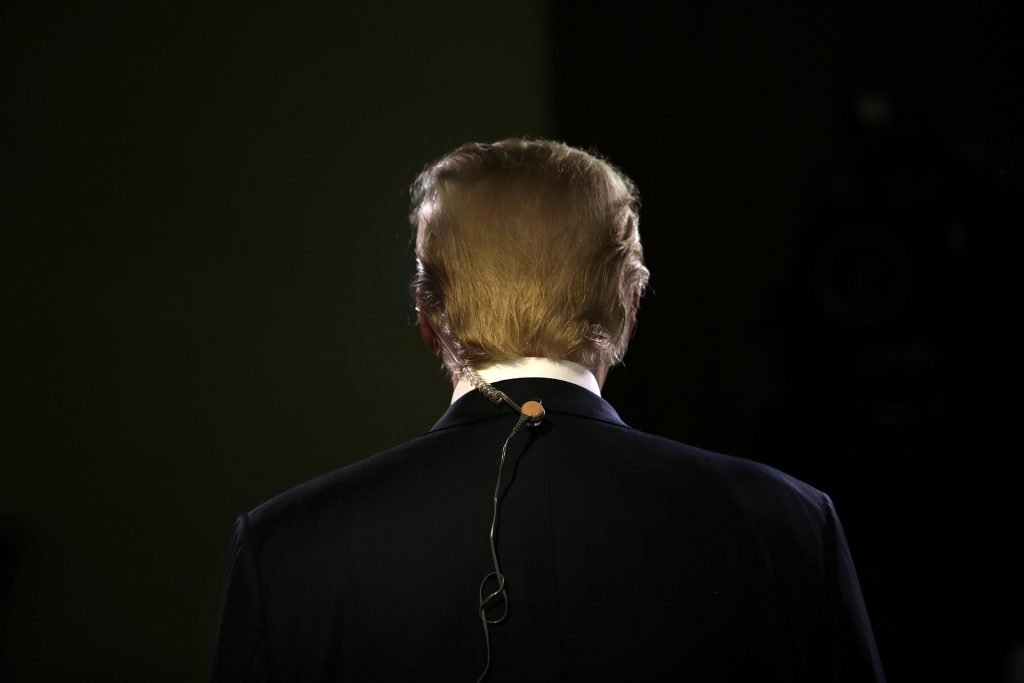 Two flashbacks and one flash forward in Trump’s catastrophic reign.

For the first, let’s jump back to 20 January 2017, the day of Donald Trump’s inauguration. His first presidential speech was filled with the rhetoric that ‘the people’ had clawed power back from ‘the establishment’. This was just weeks after he put together by far the richest administration in US history: a cabinet packed with millionaires, centimillionaires and billionaires, a cabinet of, by and for the 0.something-1%. Immediately after descending from the podium, he insisted that his inauguration had more people in attendance than Barack Obama’s ceremony eight years earlier. He ordered everyone in the state bureaucracy to adhere to what was a blatant lie (a casual glance at a comparative photograph is enough to dismiss this falsehood). The White House press secretary unambiguously said: ‘This was the largest audience to ever witness an inauguration—period—both in person and around the globe’. Whether this pronouncement was really intended to convince the attending reporters, the various government bureaucrats forced to nod along with it or the public, this very first act of a newly inaugurated president set the tone of the regime and indicated its distinctive relation to truth.

This scene is worth recalling now for two entangled and enduring points. Firstly, Trump’s inaugural presidential lie was patently ridiculous. This is important, for having just ascended to one of the ‘most powerful jobs in the world’, Trump immediately revealed his weakness. As he donned the epic title, he also became the world’s most mocked man. It is worth recalling that the day after his inauguration saw the Women’s March, the largest single-day protest in US history. With around five million protestors, it gave Trump the honour of being publicly rejected by more women in a single day than any man in the history of humanity.

On another level, Trump’s contempt for reality and his delusion of having power over it  became his armour and an element of his appeal to many. It was something of a grim inversion of the dissident maxim against authoritarianism ‘speak truth to power’. Trump effectively flipped this on its head: he would ‘speak power to truth’. Since day one of the Trump regime, this has been its guiding light. Would anyone be surprised if Trump proclaimed that structural racism in the United States was a ‘Chinese hoax’? Perhaps this is no more absurd than his making the same claim about global heating and the COVID-19 pandemic. By denying the real circumstances on which these and other examples are based, his administration seeks to deny and delude on a monumental scale.

Here we find a central contradiction of the Trump regime: it is simultaneously immensely powerful—led by a billionaire with control over nuclear warheads and an empire capable of seemingly infinite debt—yet pervaded by a weakness that comes from an incoherent vision that often goes against the grain of the stubbornly existing world. This contradiction is also what makes Trump so very dangerous.

Moving forwards an exhausting 1228 days in the Trump presidency, and skipping over all manner of disasters, we reach the second flashback: 1 June 2020. This was the day Trump cowered in the secret network of nuclear bunkers below the White House. He claims that, rather than hiding, he was carrying out an inspection, but then again, for someone who has made more than 18,000 false or misleading claims over this period, there is good reason to be suspicious. In this moment, at the risk of stating the obvious, on Trump’s watch America had not exactly become ‘great again’. Ravaged by the most COVID-19 deaths on the planet—so far over 130,000 Americans have died of COVID, many purely for the lack of adequate medical care—inequality has reached new heights, with unemployment levels not seen for most of a century, the real economy spasmodically disintegrating, fascism resurgent, an acceleration of world-burning ecocide, and to top off a rampant militarisation, the highest threat of nuclear war ever.

In the midst of all this, the country is gripped by the most intense civil unrest in half a century, maybe longer, and another globally warmed wildfire and hurricane season is bearing down. In tangled parallel, financialised accumulation demonstrates just how far removed it is from the reality experienced by ordinary people, with the Dow Jones surging and billionaires’ wealth rapidly expanding; they are gaining power and profit from this chaos. Plainly, these compounding catastrophes go far beyond any one leader, being an expression of a profoundly unequal social structure—the corrosion at the very heart of the American Dream. Nevertheless, it was in this desperate, dangerous context that the impeached, incompetent president strode up out of his bunker.

In this moment of apparent cowardice, Trump made an infamous speech thick with lies and confusion , along with threats to use ‘heavily armed soldiers’ to ‘dominate the streets’. In the immediate context he had been pushed into this reactionary position by a social movement against police brutality; hence his reaction of applying more police violence can perhaps be most fruitfully read as a purposeful tactic certain to inflame the situation. Immediately thereafter, he ordered militarised police to violently clear away peaceful Black Lives Matter protestors around the White House so that he could pose for a photo clutching a Bible. Trump’s not one for subtlety; this was a clear shout-out to the evangelical Christians who make up about a quarter of the country’s population and compose part of his extreme right-wing base. While far from homogeneous, a significant portion of the evangelical Right support actions they think will accelerate the coming Apocalypse, and thus bring about the Rapture. And they have some reason to think that this perverse wish is within reach.

Before the coronavirus crisis The Bulletin of Atomic Scientists put their ‘doomsday clock’ closer to midnight than at any time since it was set up in 1945. Beyond this fundamentalist base, Christianity in the United States is undergoing a shift that could well have profound impacts. Of Americans who attend church once a week, almost 50 per cent believe that Trump is personally anointed by God to rule. Responding to this, the spray-tanned real-estate agent turned president replied: ‘I hope it’s true. All I’m going to do is I’m going to do my best and part of what I’m doing my best on is for the religious community, beyond evangelical, evangelicals a very big part is very important to me’.

As the cameras snapped away at the carefully staged photo-op, with traces of chemical weapons still wafting on the air, this second flashback provides another example of Trump’s contradictory strength. . The Trump administration showcased this transparent construction as a moment of great triumph, yet again, as on day one of his presidency, Trump’s actions revealed its contempt for reality. Without a shred of evidence, he heaped blame for the protests on Antifa, an amorphous social movement opposed to racism, fascism and police violence. This raises an intriguing question: if one’s enemies are anti-fascists, does this amount to an open admission of being fascist? In the following days, Trump retweeted odious footage of a white couple pointing automatic weapons at Black Lives Matter protestors and of his supporters chanting ‘white power!’, thus generally encouraging race-based vigilante violence. Menacingly, his re-election campaign released a flood of targeted advertisements on Facebook that prominently used the symbol of an inverted red triangle to denigrate and promote fear about Antifa. The red triangle is drawn directly from Nazi iconography, where it was used in concentration camps to distinguish communists and political prisoners from Jews, homosexuals and the others deemed subhuman and marked for eradication. Suffice to say, this is a very dangerous situation.

In this context another round of the great rotting spectacle of a US presidential election looms, promising new levels of debauchery. After an early shake-up from Bernie Sanders—a candidate with actual vision and integrity—the Democrats rallied behind Joe Biden on the dubious assumption that he is the safer bet to beat Trump, demonstrating a chronic inability to recall why they were defeated in 2016. Thus, the stage is set for Trump, the very personification of imperial decay, to be challenged by a smiling relic of a dead order. Despite Trump’s manifold faults, wheeling out this gaffe-prone, potential #metoo disaster who can’t remember his lines as the key contender will not necessarily translate into electoral defeat of the Republicans, regardless of current predictions.

Flash forward a few months into the very near future and imagine a moment when Trump, having to face up to an election, thinks it might just be better not to have one. This is, of course, entirely speculative. The point is that the signs are there in Trump’s commitment to speak power to truth that there is a real chance that the next US election may not take place, or if it does, that Trump will not heed the verdict, should it point away from him. Having openly admitted that voter suppression is essential to keep the Republicans in power, suppressing all votes may be the logical conclusion of Trump’s inflammatory strategy of seeking to intensify chaos and spread fear, and gear people up to a further militarisation of social life.

Trump has openly envied the authoritarian ‘President for Life’ proclamations in China and Russia, and could possibly take that massive gamble, attempting to annul what is left of US democracy. How could Trump, ‘anointed by God’, accept being beaten by the husk of an evaporating liberal order?

Would such a coup work? As unprecedented as it is in the North American context, it would depend on whether the state apparatus acceded to it and how the various factions of the elite and more general populace would struggle it out—profit über alles extractors (Wall Street, Silicon Valley, Big Oil, military-industrial complex), the white supremacists and death-cult fundamentalists, the global empire military hawks. Some of the elite factions may well prefer a less chaotic, Biden-led administration, with a business-as-usual extension of US power by attempting to graft a ‘human face’ onto the inhuman apparatus of cybernetic capitalism and its boutique wars.

It is perhaps unlikely that Trump could pull this hive of contradictions into a new and explicitly dictatorial order, but even if he could orchestrate this within the elite (and that’s a major if) then it would be fought out on the streets with an outcome that is anything but certain. As the vibrant protests of the last month have clearly shown, there is a mounting and powerful rejection of the decomposing status quo, a profound questioning of deep injustices and hope yet for something new to rise out of the ruins of liberal democracy.