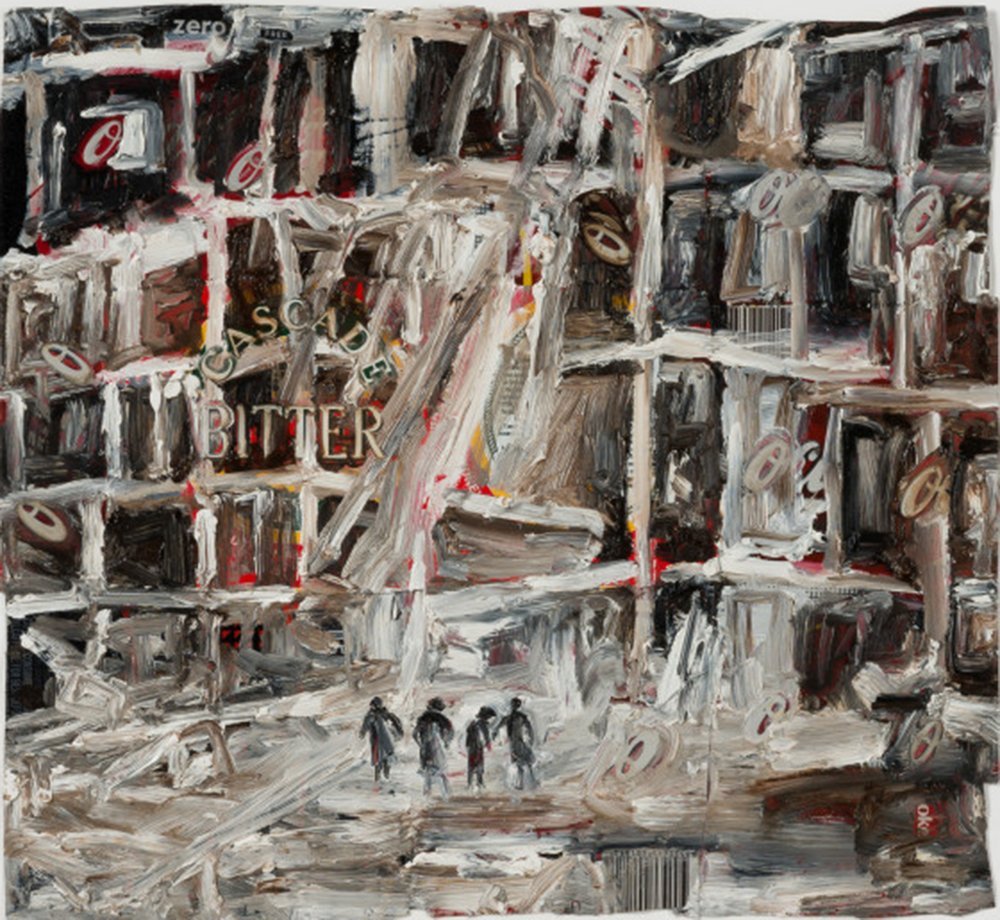 I’ve also read that humans often labour under a ‘belief in a just world’. When I first came across this notion, I thought: That’s nice! That’s something! Then I read a little more, and learned that this phenomenon does not refer to a belief that the world should be just. Rather, it refers to what is essentially a form of superstition, a false attribution, an inaccurate linking of causes to effects—which comes down to this: when something bad happens to someone (that is, to someone else) it’s because they ‘deserve’ it. A ‘belief in a just nature’ is merely an elaboration of this, and was expressed last summer when our east coast burnt to the ground. Many of us smugly claimed (beached safely, on our couches, far, far away), Ha! Mother Nature is roaring in rage!

Likewise, we express a ‘belief in a just nature’ today, when we interpret this global wildfire of illness as being another sign that so-called Mother Nature is avenging us. The canals are running clear in Venice! The hole in the ozone layer is—gone! Indians can see the Himalayas! Goats have reclaimed Wales, roos are hopping through Adelaide, coyotes are strutting their stuff along the Golden Gate! This is the end of the Anthropocene—and the beginning of the post-human era! (We say this gleefully, apparently assuming that—somehow—we’ll be here to see it all unfold: our exceptionalism knows no bounds.)

We do not quibble about the specifics of such knee-jerk pseudo-theories. We do not wonder at how Mother Nature harms anyone—other than herself—when she incinerates millions of plants and animals, or kills off those (the poor, the elderly) who leave the lightest footprints on her rugged earthy back. We ignore, too, how the evidence we use to prove these theories often turns out to be Fake News—that is, evidence of nothing less than the fact we’ll always believe what we want to believe.

Though these two cognitive forces work in quite opposite directions—optimism denies a multiplicity of correct attributions, whereas ‘a belief in a just world’ imposes one false attribution onto everything—they nevertheless coexist quite easily in our minds. And so, when we watch the news reporting on the sick and dead and unemployed, we only see those people, people who are not us, people who will never be us. We watch their catastrophes unfold and we experience something that walks the wobbly line between thought and feeling: we wonder, vaguely, What did they do to deserve that? (Thinking this, we feel better—safer, superior.) We’d admit, if we chose to reflect upon such thought-feelings—such intuitions—that such ways of seeing are unfair, simplistic, cruel, illogical. But superstition is powerful: working at the edge of consciousness, we can hardly help it (and we don’t want to).

Things have quietened down into an agitated communal waiting. No longer afraid, or excited, we have begun to blame and complain and—most of all—calculate our losses. Each locked into our own, personally styled Groundhog Day, we increasingly wonder if our government has overreacted to the so-called threat. (For the threat has become little more than a boring rerun on TV, one whose tropes and plots no longer entertain or titillate—and barely even convinced us, in the first place.)

We wonder, For what and for whom has our hypochondriac, agoraphobic caution been enforced? Even the papers are pointing out the troubling fact that the young have been thrown off economic cliffs to save, mostly, the ageing and elderly—that is, the group who holds the most wealth in our society. Boomer bashing has moved from tease to blood sport. Are we doomed to live off their crumbs? No wonder Mother Nature wants them dead—stuffed, as they are, on all that she had to offer, all that they’ve ruined! (We wonder what these furious young will say when they inherit their parents’ wealth. No doubt, by then, they will have found another group to name and shame and blame.)

The analyses—the whys of it all—hardly matter. The reality is this: the have-lots and have-nots have been cleaved further apart than ever. Someone has to pay. Something has to change.

Oh yes, it’s as true as ever: delusions have utility. No matter what is going on, we—all of us—lie and lie together.

We both know, of course, that we are avoiding the real question: What is right?

It should be about needs, he says, not wants.

Should, I quote, is the worst word in the English language.

Needs, not wants. I turn the phrase over slowly in my mind, and cannot help recalling the interwar magazines I once studied. I remember my own rising anxiety as I watched the journalists discover what truly lay behind the Soviet Union’s Iron Curtain. Still reeling from the First World War and the Depression, the USSR’s ‘great experiment’ represented the hope of many, back then, for a more humane future. It was heartbreaking to watch that hope turn to dust in the strange real-time induced by the archive’s dry old pages, as the writers realised that there was no socialist, communist utopia. There was just another dictator (yet another man) promising power for himself, poverty for all, and death and torture for the many.

I learned, from that research, to fear the utopian impulse. I saw how it blinds those who are driven by it—and drawn to it—and, most of all, I saw the dangerous power of those shrewd enough to harness it. In other words, I saw how the notion of utopia is fundamentally fascistic, paradoxically dystopic: yearned-for Better Worlds might turn out to be any damn thing at all, but they are always about total domination and total control.

Fuck your socialism, I say to him, and fuck every other wholesome bullshit theory that denies the devil in each and every one of us.

Speak for yourself, he says, denying—as always—the devil in himself.

I like capitalism, I reply, though only to provoke him (for ‘like’ is not what I mean at all). It doesn’t pretend to be anything other than it is: the triumph of pure bloody savagery. ‘Survival of the fittest’ is the only theory I know that’s as true on the page as it is in reality.

I recall the first weeks of this disaster, how we looked on as some people panic-bought toilet paper and pasta—while others stocked up on guns and ammo. Many acted shocked at the semi-automatic sensibilities of the latter—presumably because it was easier to be appalled than to confront such people’s evident belief in violence as the norm. The gun-toters seem to understand best that anyone might do anything when their back’s against a wall. Perhaps they believe—or know?—that we’ve never stopped living in the jungle.

He leans over, kisses me, and says. Nighty night. Don’t let the Reds under the bed bite! Ha ha! Then, as infuriatingly as ever, he goes straight to sleep. (The Sleep of the Just, he’s called it, when I’ve complained jealously about it.)

I lie beside him—fizzing—and wonder if my fears are founded: for, rationally or not, it isn’t the illness that scares me in these strange, suspended days, but only (and as ever) people.

People who see in this ‘unprecedented crisis’ an opportunity.

People who are always so bloody certain of their certainties.

People who wish to make the world—like their Gods—in their own image.

People who seek power over anything other than themselves—especially people who pretend to be doing otherwise. (For it’s as true as ever: better the devil you know. You can fight, run from, deal with, talk to—even make an ally of—a devil you can see. A devil is only, after all, a fallen angel.)

Those who rejoice that we’re witnessing the death throes of capitalism must be as high as fucking kites. Disaster capitalism and surveillance capitalism—the military- and medical-industrial complexes—all existed long before this: this crisis just might be their heyday. For, surely, our government’s overnight conversion to Keynesianism is temporary, not heroically compelled by humanity but by something much more banal: a need to stabilise the economy—and placate the suddenly vulnerable middle class. Left will flip back to Right again, just as easily. And then?

This is what will remain: a bigger, more desperate—more exploitable—underclass, and a porked-up police state. For, while everyone’s been distracted, the government has passed all sorts of extraordinary laws without oversight or consultation—the crisis itself apparently granting automatic, unquestionable justification. It’s for your own good. We know what’s best. Do what you’re told for the sake of the everyone else. Though the social safety net will disappear—as quickly as it came—you can be sure that these new laws will stay in place. No-one gives up power—gives up anything—once they’ve got it.

Already we’re hearing the corrupt paternalistic blackmail of: We’ll give you your normal lives back, IF…

Freely unsafe. Safely unfree. Of course, nothing quite fits into such dichotomies, but I will always—always—fear the unsafe ‘safety’ imposed by those in authority.

I turn off the light, lie in the pitching dark, and listen to his breathing deepen. Needs, wants. For the hundredth time I wonder how he—who is nothing less than a refugee from the former Yugoslavia—can be so idealistic, so naive. Even I—just a child watching TV in the Antipodes—felt a shiver when I heard that strange new whispered word: Srebrenica. If everyone’s needs were met in that great communist, socialist state, why did it implode once its leader (yet another dictator, yet another man) died?

His only answer to this is: It was a great country! It was—before they fucked it up! (They. Not I, not we—as if his family’s choice to flee was not, itself, part of the catabolic equation; was not, itself, suggestive of the true nature of that republic.)

Perhaps that is the cure for the rot that corrodes the heart of every idealist’s utopia: stupid, sentimental, revisionist nostalgia.

As I finally drift into dreams I wonder how time will see us treat these surreal suspended days. Will we forget them—as we so often forget the truths we learn in the night? Or will we do what we normally do: simply remember what we want to—just as we believe what we want to. Remembering and forgetting are only forms of delusion, after all—as useful, and as dangerous, as any other.