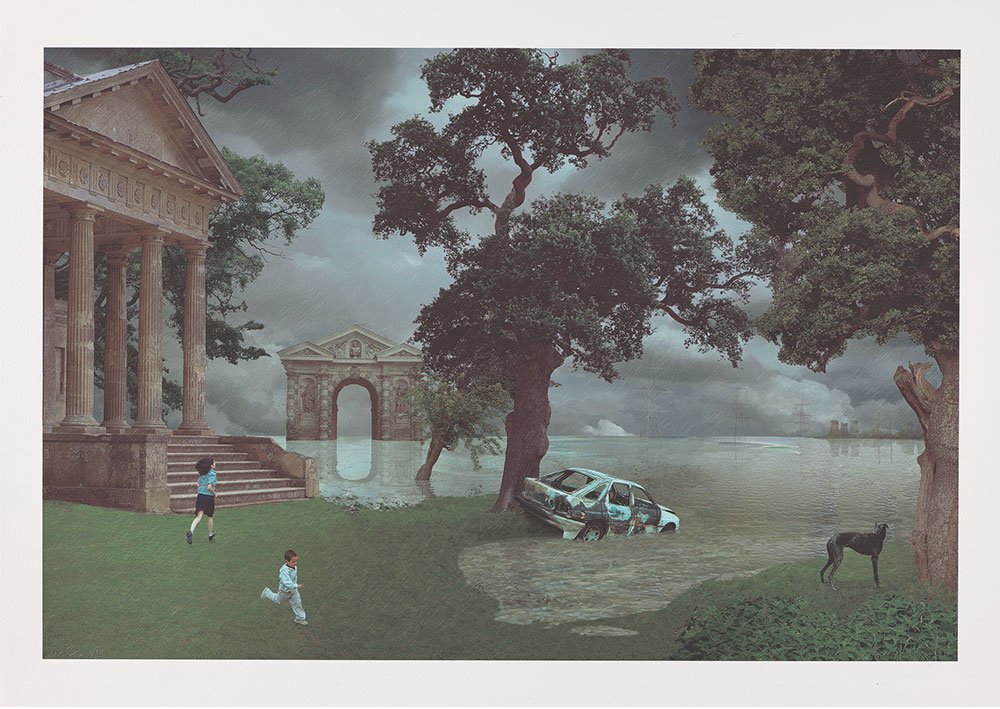 With everything stopped, and everyone sent home, the smog has begun to lift. Entire countries gaze up at the stars for the first time in living memory. The canals and rivers and oceans are running clear, and plants and animals have begun to unfurl and move: a migration back from the brink, a return from the periphery to the centre.

We all sense—irrespective of what we might think, or do, or say—that this is exactly as it should be: enough is enough.

Shoulds aside, we are very scared and we are very excited (increasingly, we cannot tell the difference between these two feelings). The changes we witness implicate us. They exclude us. They might destroy us—or recreate us.

Aren’t we animals? some ask, as if this question were irrelevant before. Don’t we have a right to be here too?

Who are they asking? And why? Hasn’t the landscape already given them its reply? Yes, and, Perhaps not.

Dystopias are so damn pretty. They are also riddled with clichés and belong to the picturesque realm of fantasy.

And so, we cannot believe our eyes at the stunning, stark spectre that’s unfolding, overfamiliar scenes from books and movies: images of people tumbling in the wake of an invisible force moving across the globe’s silent cities—a tsunami of trouble that nobody saw coming. (No one saw it coming, did they?)

On our TVs and phones and computers everything is flattened into an absolute equivalence. Adverts, movies, sitcoms, documentaries, game shows, reality TV: they all reach us through one screen. It’s hardly surprising, then, that our brains can’t tell the difference between fiction and fact. All we see are storied images.

We still feel safe, way down here at the bottom of the world: the Antipodes. Life is still normalish (though we are making up new adjectives). We do normalish things whilst devouring strangeish images from far-away places of what looks like a new kind of warfare. Some ask, Is this warfare? It won’t be the first time the unprecedented—the unimaginable—has been used in a war. It won’t be the first time a biological weapon has been used against the innocent. Some ask, Are we innocent?

Conspiracy theories abound. In a world seduced by technology—and increasingly warped by extreme extremes—these theories sound rather plausible. They are also very entertaining. We mock conspiracy theorists—we do—but their tales make a home in us and feed our worried wondering.

I study satellite images of countries whose industries have ground to a halt. A month ago these countries were cloaked in bilious blurs of nitrogen dioxide. Today, their earthy terrains are unveiling themselves. Fantastic revelation. A savage surge of joy belts through me: The world is righting itself. To think we once believed that money and technology could ever out-game biology.

I say to him: It’s so poetic, isn’t it? It’s so hard not to ascribe meaning to all of this.

He looks annoyed. Worse: he looks disgusted. You’ve got to be fucking kidding, he says, and slams out of the room.

I scroll through the article and stop at a photo of a brick wall stuck over with newspaper: the obituary pages. Overseas, funerals have been banned for weeks: this is the only memorial allowed now. Overseas, abstractions have surrendered fully to the concrete. Is there a place, in this new world, for metaphor and poetry? (Even the question seems obscene.)

It is odd, that digital images born from a distant satellite should move me so deeply, whilst this—the sheer loveliness of ordinary faces—leaves me feeling nothing much at all.

What is wrong with me?

Perhaps there is a name for such cool curiosity in the face of actual, and oncoming, tragedy. Perhaps it’s some sort of pre-emptive, self-protective numbness—or is that, simply, dread?

Better to be up in space, I think, than stuck here with the beloved dead.

So, I’ve closed my business. It’s not a big deal. (It is only my sole source of income.) This is what happened. A week or so ago, as rumours of a lockdown grew, people started to behave in increasingly strange ways. It was fascinating to watch, and we revelled in our sense of superiority while we snickered at the hoarders and the toilet-paper squabblers—as if it was funny to see others in a state of high anxiety.

In this context of clickbait-fuelled panic, I began to get odd enquires: We are a young and healthy couple looking for a cabin for a month or three 😉 so we can enjoy nature! 🙂 When I read this, something chilled in me. I thought of eugenicist, pre-war Germany and wondered, What stigmas will this disease spread? My Chinese friend is already more afraid—than usual—to walk down streets where people sneer about Wuhan Flu, the Chinese Flu, the Kung Flu. Just days ago, she raged at me: Racism is the disease! We have always been your scapegoats! (I had no reply.)

And, whilst it’s horrible to witness the far-away fates of those we cannot aid, it is worse to see the state of those we can help—but won’t: the homeless cruise ships drifting in our oceans, claustrophobic with the sick. When did it become a choice to ignore the laws of the sea (or that other little thing—our shared humanity)?

The image of these hulking nightmares clutches at my core—recalling to me, once again, old stories from the war: the St Louis with its crew of nine hundred doomed Jews, travelling coast to coast, seeking refuge. What did the world do then? Exactly as it does today. It refused them entry—and sent them on their way. Though I pondered all of this—with politically correct and intelligent concern—my instant reply to my creepy new customers was (at least, in my head): Fuck off, you filthy vectors.

For days I was confused about what to do. I envisioned thousands of people pouring out from the city, glittering with the promise of a brand-new industry: ‘Quarantine Retreats!’ If I saw the illness and their panic infecting our Arcadia—I also spied a gold mine. We decided that we must not aid and abet them. We can wear the cost for now, we said, therefore we should—for everyone’s good. But then, as I watched scores of bookings—and thousands of dollars—disappear, I lost sight of our nobility. In its place? Stupidity and, worse, our perennial bloody vanity.

Had I not, single-handedly, just made myself dependent? And for what? Community? Country? Morality? Since when did I give a damn about such coy chameleon notions?

Well, it is done. Only time will tell us, now, what was right and what was wrong—who was in, and who was out—when we were flung at history.