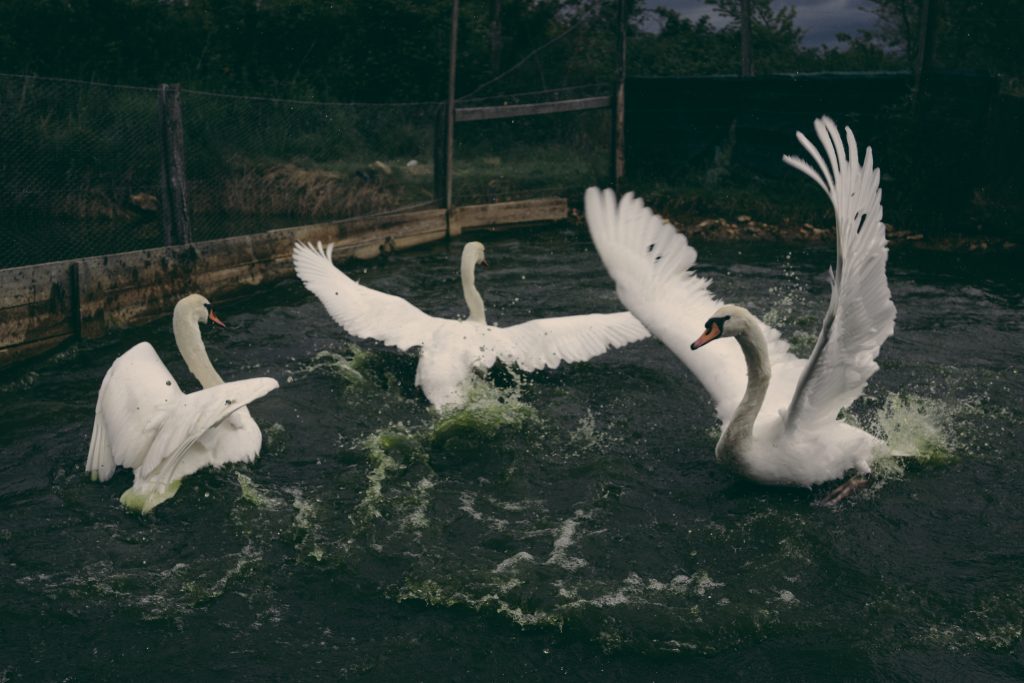 I would love to eat a swan. Poultry is such an exhausted category. Quail is too fancy, turkey is too dry, chicken is too ordinary, pigeons are for carrying messages, pheasants only exist in medieval stories, and ducks are just short geese: swan is the last hope. But I can’t eat a swan. The Queen owns them all, and she won’t share; she doesn’t even reply to my letters. According to my friends, and most people I talk to, this is not a very good reason to become a republic. But it’s no worse than the reasons offered by the Australian Republic Movement (ARM). Indeed, the republic debate seems devoid of a good argument.

Since the election, the republic debate is yet to lurch back into public consciousness, but inevitably it will. Last year the ARM released its model of an Australian Republic. Such acts and similar announcements are biannual. The new Labor Ministry includes an Assistant Minister for the Republic—the ministerial equivalent of milk monitor. Labor is committed to the question if they win a second term. I hope to save them and the Australian public the bother. To that end I shall close read the ARM’s website. I consider this analysis a pre-emptive act of intellectual vandalism.

The intellectual case of the ARM begins from a false premise, and devolves from there (the Queen of Australia is, in fact, Australia’s head of state). As an act of hermeneutics, glossing the ARM’s case for a republic is on the order of interpreting Heidegger. It is higher criticism. As an act of reconstruction it is like piecing together lost Plato dialogues from fragmentary manuscripts. This is also a historical study; the ARM has updated their website since I wrote the first draft of this essay. Critics might call me flippant and accuse me of being uncharitable. On the contrary, I am treating this issue with the degree of levity it deserves. What is more, charity is an intellectual principle reserved for arguments.

On its old website, the ARM offered some compelling reasons why things should change. I would cover them separately, but two are basically the same:

Australia should be fully independent. It’s not right for Australia’s democracy to be subject to a foreign monarch.

This point is quite funny because the Queen is not a foreign monarch, but I have laboured that point already. It is factually false but alludes to the spectre of Whitlam; I shall exorcise that later. On to the old website’s strongest reason. It reveals the symbolic motivations of the ARM:

Having an Australian as the head of Australia would ensure the things our nation stands for—fairness, equality and merit are better represented at the top of our system of government. At the moment, the chief qualification for being the head of Australia is which family you were born into the British Royal Family. The role is too important for an independent, modern and democratic nation like Australia to leave to chance.

This point trades for its life upon equivocation and non sequitur. How does having an Australian head of state ensure anything? Merely having an Australian head of state does not mean that these values will be better represented. They might be utterly horrid; it has happened. Even if we had a head of state who stood for ‘fairness, equality and merit’, this wouldn’t mean that those values would spread throughout the land. A head of state who represents values does not necessarily improve a nation. President Obama was a symbol of such values, but that did not change America. A Freudian critic would latch onto ARM’s attraction to symbolism with and connect it to something in its childhood. As the website does not offer sufficient data for infantile speculation, however, I will examine other passages. The ARM’s old website plays suggestively with the rhetoric of menace:

Australians have no say over who the head of our country is—instead, the head of our country is automatically the King or Queen of the United Kingdom. The Governor-General is only their representative to Australia and acts on their behalf. They have to approve every law made by our Parliament, every election and the appointment of every government.

It nods to Whitlam; it sets all its hopes upon that memory, and prays, good citizen, that you do the rest. It’s all the movement has; in the morning, this animus drives it from bed to its perpetual hustings. As Milton was to T. S. Eliot, the Whitlam dismissal is to the ARM. The new website is less subtle:

[Australia’s head of state is] not chosen for their ability or merit. They’re not accountable to us. They don’t represent us or put Australia’s interests first and yet they are given an important role in Australia’s Constitution

Fortunately, as qualified by their FAQ page, Australia’s head of state doesn’t actually do much; ‘they are not responsible for the day-to-day governance of the nation, setting policies or introducing laws’ (this is a role the old website said was ‘too important … to leave to chance’). We should read the new website’s reasons with this qualification in mind. The new ARM website leans heavily on representation. Indeed, they put the word in bold so it doesn’t slide away: in a republic you ‘can decide who represents you’. The nature of this representation seems to be mostly symbolic:

Australians should have genuine, merit-based choice about who speaks for them as Head of State, rather than a British King or Queen on the other side of the world.

Given the hermeneutic qualification raised above, this suggests the Queen is doing a lot of speaking for Australia on the world stage. Where else is the representation occurring? She is ‘not responsible for the day-to-day governance of the nation, setting policies or introducing laws’. The second reason drives in the theme of representation, and the third hammers it home:

It’s time the Australian people chose one of our own to represent us as our Head of State. Someone accountable to us, so that our future, more than ever, will be in Australian hands.

At this point, I lose patience. How much can one website confuse de facto and de jure? I want to grab the ARM by its scruff and cry, You already have all the representation you could want; it’s called parliament. If you want a better Australia, do it in parliament, change the political culture. Don’t go after an irrelevant figurehead. It’s almost a positive that our head of state is irrelevant, does nothing, and can be invested with a bunch of executive powers that are never wielded. The Queen does naff all and that’s a good thing: all pomp and no circumstance. The ARM is infuriating; becoming a republic will not improve the lives of Australians. I write this article, intemperate and irreverent, my patience exhausted with the knowledge of how much time will be wasted on this irrelevant debate.

Out of concern for republicans’ blood pressure, I will now deal with the Whitlam objection below. A breeze might have blown this feeble phantom out of Australian republicanism, but whence the winds of change? The standard form of this objection is as follows:

The standard response to this objection is as follows:

Could this not happen in a republic?

If it an Australian president would possess the powers to dismiss the prime minister, then the Whitlam objection is without force. Do presidents or governments in republics not abuse their powers? Even if an Australian president possessed no such powers of dismissal, the Whitlam case is not an argument against the monarchy: it did not involve the monarchy in the sense that the monarchy did not order the dismissal. Consider the facts. The Governor-General—a representative appointed by the government and rubber stamped by the Queen—on his own recognisance, dismissed Prime Minister Gough Whitlam. The Queen did not interfere with Australian democracy; her representative, the Governor-General, did, and at his own behest. Sir Martin Charteris, the Queen’s private secretary, did inform the Governor-General that he possessed these powers. But this is not the smoking gun. If one wishes to allege intentional interference by the monarchy, one needs to show that the Queen asked Sir Martin to inform the Governor-General that he possessed these powers. One must show that it was the monarchy that made Sir Martin communicate this information, not Sir Martin himself. Otherwise, it is the case that Sir Martin merely acted inappropriately as a public servant—something that also occurs in republics.

At best, all republicans can argue is that Australia being a constitutional monarchy made the dismissal possible. Well, so did Gough Whitlam being born. Because the mechanism of the Whitlam dismissal is not exclusive to a monarchy—because heads of state can and do exercise authority in ways that are illegal or inappropriate—the Whitlam objection is useless. It only works if such an event is not possible in a republic. This argument to some extent cuts republicans as well. If the position of president is enlarged and becomes politicised, such dismissals and other inappropriate or illegal actions might become more prevalent. There is a value in vesting powers in a figure who will almost never use them. On a higher level, this paragraph is an example of the sort of hair-splitting wastes of time that a debate about an Australian republic will induce.

I am a practical monarchist and a theoretical republican. I hate the snobbish pageantry, the sycophancy, the idea that someone like Prince Andrew is due deference simply because of his ‘noble’ birth, but I fail to see why being a republic is in our interest. We are in the Kierkegaardian sweet spot:

We do not want to abolish the monarchy, by no means, but if little by little we could get it transformed into make-believe, we would gladly shout ‘Hurrah for the King!’

For most republicans, the change of symbols won’t mean much; it will be a triumph of individualism, emotionally pleasing but materially insignificant. Personal displeasure at and dislike of the monarchy is not a compelling reason for overhauling a system. Not when we have other, far more pressing problems. It is like me wanting to eat swans: individualist. The new Labor government should not squander political capital on this issue. The only good argument for becoming a republic is that the monarchy is a vestige of colonisation—that Australia can only confront its colonial legacy by becoming a republic. This argument is not merely symbolic: one might argue that the continued existence of the monarchy constitutes a source of trauma for Indigenous Australians. On this line the monarchy is like the statue of a slaver: a trigger-point for trauma. This is a worthy reason for change. Without this reason, the republic debate is a waste of time which we should ignore. Some republics are good, and some constitutional monarchies are good, but it is politics and political culture that makes them so.

It is likely that this article involves errors of fact or reasoning, but they are irrelevant. All that matters is the central logic: becoming a republic will not improve the lives of Australians. The republic debate should only figure as one part of a broader debate about decolonisation.

Josh Abbey is about to finish his honours degree in philosophy.