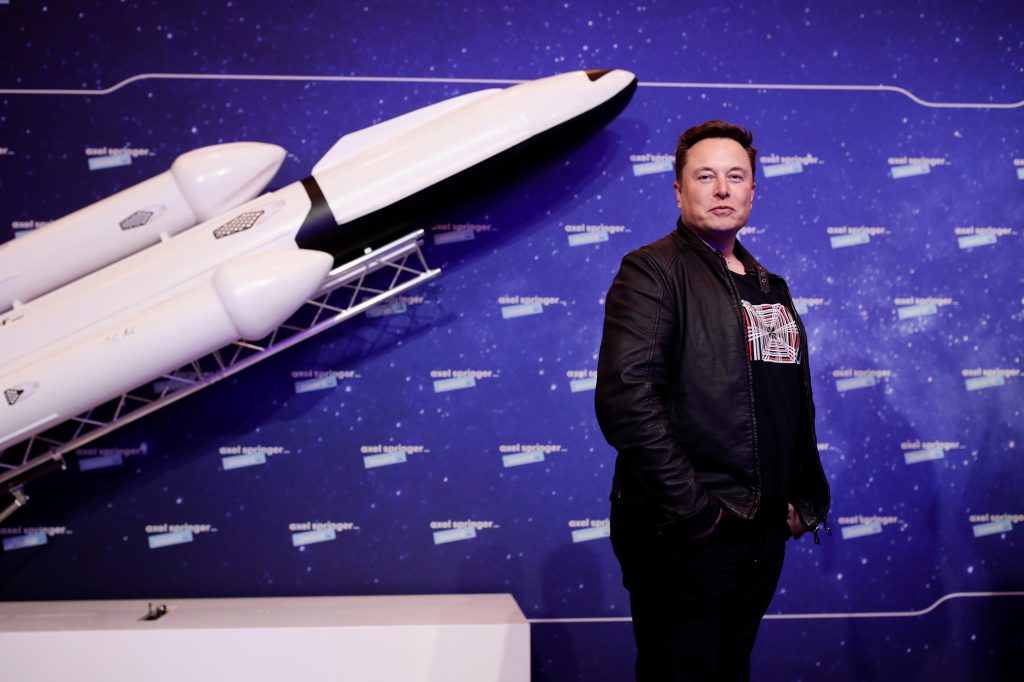 Elon Musk has declared he is the ‘techno-king’ of Tesla. Might he also view himself as a digital-age Prometheus? In this conceit he has kin if no real comrades. Consider Musk, Jeff Bezos, Mark Zuckerberg, Larry Page and Peter Thiel: proboscises unbound, these apex aspirants are untethered celebrity-aggregators, corporate criminals who flourish in a hybrid space where New Age meets hyper-wealth. In this magical zone the blessed exist beyond ‘our’ event horizon.

Perhaps all of us now live in a world of make-believe. Gravity is no longer a constant; money flows uphill. Probability can’t be banked on; Prince Harry is Chief Impact Officer for BetterUp, a start-up valued at more than a billion dollars, even though no one in the real world knows what its product is. Cause and effect have become disconnected; central banks have invented trillions, nearly all of which has evaporated into ‘investments’ unhinged from the land economy. It feels peculiar, non-linear; leveraging and debt are without restraint or threshold. Proportion has taken a break; outrage is detonated out of scale with incident. Nearer to home, what were once vices—vanity, greed, exhibitionism—are now prescribed.

In this fever dream a kinked kind of fable-making is taking hold. The words may be familiar—unicorns, rainmakers, dream alchemists, Midas list—but their referents, big-tech protagonists like Musk and Bezos, Zuckerberg and Thiel, present a form of life that, arguably, has never previously been seen. This seems likely, but it is a proposition, a non-verifiable if plausible claim. What follows plays with the idea that, in a habitat that has never previously existed, new mutations have emerged that align with this environment. The lectotype of this new species—the self-made man and the made-up woman—deserves attention. We can observe their behaviour, but what moves them, distinguishes them from others; what shines brightly, and what lurks darkly unobserved, in their interior?

Are the new digital plunderers really any different to arch villains like Rupert Murdoch? Yes and no. On the one hand, if financial trajectory—the rate of capital appreciation—is the criterion, the acceleration of net worth enjoyed by the digital czars is unlike anything history has ever seen: Musk’s  net worth increased by US$25 billion in a single day in March 2021. For anyone even slightly prone to hubris, the G-force experienced in such a lift-off would be warping. Self-appreciation, if not necessarily selfhood, thickens as you precipitously leave the rest behind. More, the big-tech gorillas are qualitatively distinct in that they operate at a scale of financial power that dwarfs traditional companies. For instance, News Corp is worth $14 billion, whereas Apple is worth $2.03 trillion. That’s 145 times the size of Rupert’s thing.

Of course, the new shaper-barons have much in common with Murdoch et al. Astonishingly callous, tick. Ego on steroids, tick. Likely all evince the Dark Triad—the intra-physic formation that combines narcissism, Machiavellianism and psychopathy—a condition that sports psychologists contend is essential if one is really serious about being a winner. It is no surprise that Bezos invoked a predator metaphor when he said that Amazon ‘should approach these small publishers the way a cheetah would pursue a sickly gazelle’. Like all those whose root metaphor is the law of the jungle, Bezos naturally goes to dog-eats-dog imagery, imagary that also serves to naturalise the global machine of capitalism. Presumably, he has no linguistic storehouse that might summon compassion.

What of Facebook COO Sheryl Sandberg, CEO of YouTube Susan Wojcicki , and Fei-Fei Li of Stanford’s AI Lab, or the other power women of Silicon Valley, such as the CEOs of IBM and HP? Men may be the most prominent, and are more numerous, in the big-tech billionaire bear pit, but they do not entirely own the game. Like global M&A (‘merger and acquisition’) law firms, up there in the financial stratosphere sex is not always destiny. Most likely, high-powered big-tech women are similarly psychopathic to the men; if this was not the case, they would not have been selected by the relevant boards. Essentialism rejected—sex does not preclude, nor does it prescribe, psychopathy—it remains the case that the dark stuff is inequitably distributed between women and men.

A case in point is Peter Thiel. Less well-known than Musk, Bezos and Zuckerberg, Thiel is definitely IT royalty. A maths prodigy, he clerked for a senior judge between graduating from Stanford law school and starting his finance career at Credit Suisse. Soon after, he started PayPal. After offloading his shares to eBay, he was an ‘angel investor’ in the early days of Facebook. Again collecting a billion or so, he moved on to found, or co-found, a string of ventures designed to develop ‘the machinery of freedom’—digital innovations that evade government interference.

George Gilder, a high-profile neocon economist, has said that Thiel is the world’s smartest man. More certainly, he is a declared anti-feminist libertarian who is vehemently opposed to what he calls the ‘multiculture’; he was invited to address the 2016 Republican National Convention as Silicon Valley’s most prominent Trump advocate. We know a lot about what happens in his head from his speeches, interviews and books. For example, he is an avid Ayn Rand fan: he subscribes to the ‘who will stop me?’ mantra, and he aligns himself with the policy statement made by Rand’s hero in The Fountainhead that the ‘achievement of your happiness is the only moral purpose of your life’. He is also on record as declaring ‘I no longer believe that freedom and democracy are compatible’.

Separate to his personal espousals, to a degree inferences about his interior life can be read from his actions and preoccupations. For example, Thiel has heavily invested in the life-extension-fantasy industry—yes, there is a thriving business drumming up the prospect of anti-ageing potions and high-tech fountains of youth. A more basic preoccupation is his company Palantir, a creepy data-mining and surveillance firm started with seed money from the CIA’s venture-capital arm In-Q-Tel. Like much in the iconography of the high-tech world, the name ‘Palantir’ has a fantasy provenance: it is borrowed from a powerful, darkly ambiguous artefact in Tolkien’s Lord of the Rings. (This ambiguous name is, quite likely, a knowing nod to the fact that the work of the company is ethically dubious.) Arguably more diagnostic is Thiel’s commitment to ‘seasteads’—the idea that artificial islands can be built out in the blue of the oceans. Spruiked as centres for innovation and entrepreneurship, seasteads—you are meant to think of cosy homesteads—have been critiqued as enclosures where the wealthy will not pay taxes or be interfered with by any government. Randolph Hearst’s menagerie San Simeon was a big show in its day, but the scale of Thiel’s grandiosity has a truly planetary dimension.

How does Thiel see himself? Given no one speaks, even to oneself, in a private language, it is likely that he picks what seems the appropriate social frame from those on offer. Among standard motifs, my guess is that he—like others in the Anglo-socialised elite—regards himself as self-actualised. Now an auto-legitimating trope, this template not only offers a rationale for selfishness but elevates those identifying with the ascription to a mythic status. Abraham Maslow, inventor of the utterly culture-bound hierarchy of needs—a schema that both reflected and further defined the ideological bias present in 1950s/1960s North American culture—claimed that Mahatma Gandhi, Mother Theresa and Dr Albert Schweitzer were members of the self-actualised club. These folk, Maslow claimed, had risen above the need to belong, or be accountable. For Thiel, and other winners, regarding yourself as self-actualised gives you a double bump: the handle not only permits you to be conscience free but  pushes you to be even more so. Potentiate this attribute with a whack of grandiosity—Thiel has written, ‘The fate of our world may depend on the effort of a single person’—and you get to act out a superhero script. Call it Prometheus with a very big proboscis.

Obviously, there is a great deal of redundancy in all this. The you-can-be-anything-you-want-to-be dream is neither new nor distinctive. What is particular is the yen for a hermetic, de-territorised haven. This science-fiction-inspired otherness is the dream of space and the artificial seastead, the idyll of cryogenic timelessness that imagines rebirth into an advanced and welcoming future. These adjacent visions all promise a guarantee of autarkic safety. Given that this is a defensive posture, what exactly is the danger?

Like the rest of us, the super-rich are oppressed by the prospect of climate collapse. Yes, financial implosion may be around the corner; most of the mega-rich know how precarious the inverted house of cards really is. Social collapse, too: who can’t see that that is a real possibility? Yet, over and above all this, as everybody somatically knows, the earth mother is teetering. A dread inevitably accompanies this apocalyptic vison. This anxiety may be consciously experienced, it might be subliminally sensed or it might be directly disavowed. It does not matter. The body-presence of this horror terrifies. So, if you have the dollars and smarts, the vision and the tech savvy, you get on board. You literally, not figuratively, plan to time travel, make your own island or construct a colony in space. Whew. So far, so good.

High on their own uniqueness, our ego-fed fantasists do not ask ‘what of subjectivity and sociality in our high-tech enclaves? Will there be the requisite give and take, flex and texture, fun and struggle?’ The root metaphor informing Thiel and his ilk has no place for cooperation and vulnerability because their mindset overvalues control and the well-spring that nourishes collectivity cannot be replenished. Perforce, here comes the zombie emptiness that Michel Houellebecq depicts in his novel The possibility of an island (what a coincidence). In this stitched-up nowhere, transactional relationships beget dispirited selves. Interiority diminishes, sadness is understood as a treatable condition, empathy is a crime against the code of selfishness. And, in terms of the capacity to get-on-getting-along, the business model of relationships, whoa, that’s a bust. Did Bezos employ an M&A law firm to de-merger with his wife, or was a family-law specialist called in to execute the end game out of the prenup contract? Half a dozen decades ago, Paul Getty was quoted as saying that a billion dollars is not worth what it used to be. This may be true for an arsehat few, but a US$36-billion settlement is nobody’s idea of ashtray money. Dog eat dog. Better play hard. Be a winner.

In Thiel’s Elysian Field of innovation ninjas and wide-moat investing, the mythic and the pathological coalesce to forge a greedy, hyper-masculinised homunculus. He wants to build gated enclaves on whose oceans and in whose space? Such hubris takes the breath away. Worse than drinking his own bathwater, Thiel is a death-denying little man pump-priming his ageing circuits with intoxicating shots of Hydean distemper.

Perhaps Thiel is too easy a target. Having a look at a greener, more ambiguous high-tech big shot—Bill Gates or Stewart Brand, say—might fill in the picture. What does offer context for considering the above grotesquery is to examine the relationship Thiel and his crew have with nature. Very likely, they are so anthropocentric, so fearful of the yonic, that control is juxtaposed with engulfment. In seeking to map the sociology of their psyche, an ecologically themed critique could get to grips with much of this.

Biotech is about more than ownership. It’s about what human beings are