Postcard from the Field: COVID-19 in the Northern Territory 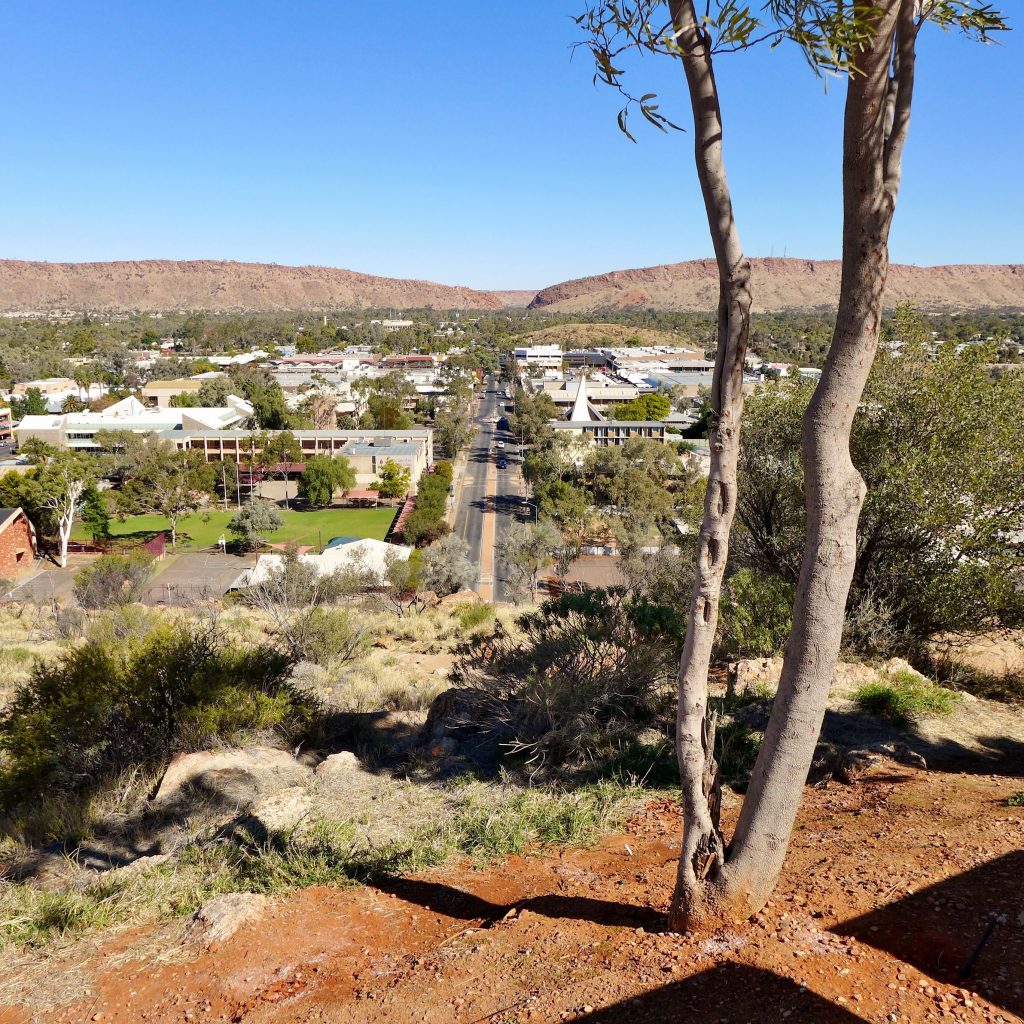 I have been resident in Alice Springs since the 1980s, where I have worked extensively with Indigenous people in various capacities. The following are some observations of the effects of the raft of COVID-19 measures introduced in Alice Springs and the southern NT region where I work.

Since the increase in benefit payments, and since Centrelink has stopped breaching people for not meeting mutual-obligation requirements, we have experienced something like a 70-per-cent reduction in calls on our emergency relief funds at the Central Australian Youth Link-Up Service. We still engage with the same number of clients, but the need for financial support has greatly diminished. In a Zoom link with other agencies that was organised by the Northern Territory Council of Social Services (NTCOSS) to map the effects of COVID-19, a drop in accessing emergency relief was noted more broadly across the Northern Territory. In time NTCOSS will examine the evidence to see if the increase in benefits has meant savings in other areas, as well as whether people who were no longer constantly short of money to feed their families experienced improvements in morale. The council may find that changes in government policy at federal level to raise vulnerable people above the poverty line are the most effective way of reducing poverty, and subsequently crime, health problems and domestic violence.

NTCOSS has noted less crime and domestic violence in this period. Current data are hard to access, as NT police statistics take time to be released (March 2020 data are the most recent), and the situation I am discussing is very current. Remote communities were locked down on 26 March, with a large reduction in the Indigenous population of Alice Springs over the week beforehand, and 27 April was when the additional $550-per-fortnight Coronavirus Supplement payment started. But an interagency meeting in Alice Springs that I attended also noted, if anecdotally, a reduction in crime, domestic violence and vandalism. Why this would be so likely involves a number of factors: reduced availability of alcohol due to pubs being closed, reduced poverty because of the extra benefits, the closing of the local casino, and reduced population pressure as many people moved back to remote communities.

Youth-worker colleagues in Alice Springs have reported an improved home environment in the town leases and community housing. To quote one front-line youth worker: ‘the kids have never looked so good—calm, well fed and clothed, happy to be going home at the end of the program’. In part this is because the usual large number of visitors from remote communities is down, and this has reduced pressure in often overcrowded family homes. The closing of pubs and the casino has also resulted in less drunken behaviour and more money being spent on basics. This has resulted in far fewer young people being on the streets, more home life, and more family time. These observations are supported by the police, Aboriginal community night patrols and other bodies that monitor and engage with youth. The weekly meeting of the various agencies in Alice Springs to coordinate responses to youth crime and night-time activities suspended operation due to lack of any action—night-time streets have been deserted.

Interestingly, the recent measures seem to have affected another aspect of our work with young people. Often people ask why Indigenous parents don’t exercise more control over their children. In part this is because parental authority is attenuated in the Indigenous domain, with less cultural support for issuing commands for no good reason. People have said to me that before European contact the dangers in the environment provided all the discipline that was needed. Since COVID-19 there is a very good environmental reason for staying at home, and the families are using this to exercise more control over young people. Pre-contact, people have told me, they used to tell kids that there were mamu (monsters) out there in the dark, on top of the ranges, and anywhere else they didn’t want the kids to go. COVID-19 fits the mamu mould, offering a culturally acceptable way of exercising parental control over young people, and families have been using it to keep their kids at home more.

The compulsory two-week isolation period that remote residents were required to observe before returning to a remote community has been an opportunity for in-depth health assessment and treatment for those in isolation. Tangentyere Council, which represents the Alice Springs town camps, recorded 147 people entering isolation from the start of lockdown to 22 May. This period saw people visiting doctors and specialists and getting their medication stable. It also provided safe environments with a good, regular supply of food for a demographic for whom this is an exception rather than the rule. The NT government announced that the remote-community lockdown would end on 5 June. It will be interesting to see what changes follow.

The COVID-19 crisis has provided the opportunity for a social experiment that could never have been undertaken under normal circumstances. I hope that there will be a ‘cost-benefit analysis’ of the increased welfare entitlements that will quantify the social benefits of not keeping a portion of the population under the poverty line and will look at potential savings in other areas that are currently needed to prop up society, from imprisonment through to various social services. Such a study would demonstrate the social value of increased individual support at the base of Maslow’s ‘hierarchy of needs’, which sees the provision of food and shelter as fundamental to the fulfilment of people’s other needs and aspirations.

I also hope that the Australian population generally, which is now experiencing unemployment or reduced employment (approximately two million unemployed and 1.3 million underemployed—or 25 per cent of the workforce—in April 2020), will now be more sympathetic to a population for whom this is a daily and sometimes multigenerational reality, and that this will create the political will to make changes in the way we all live.

Blair McFarland has been working with Indigenous people on social justice issues in the NT since 1986. He has worked for Tangenyere Council AC since 1995 in two roles - helping set up remote community night patrols, and since 2002 working with communities to prevent volatile substance misuse through a community development model. He was awarded a Prime Minister’s Award for Outstanding Contributions in Drug and Alcohol Endeavours in 2008.