Plagued by Chaos: An Inside View on the Anti-lockdown Protests 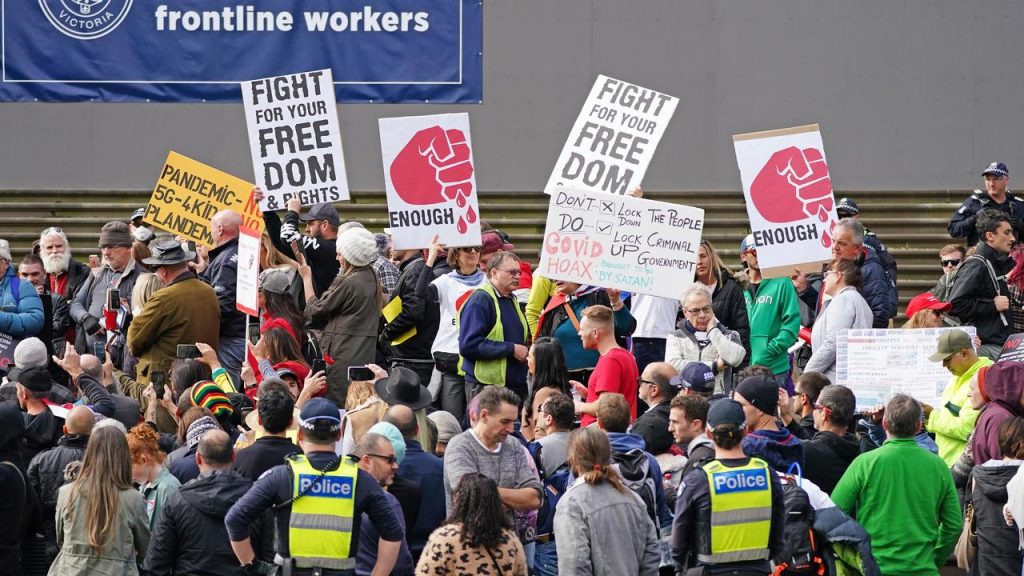 ‘Alright, who here has been sending death threats to the premier?’ asked Cushla in an encrypted chat set up by anti-lockdown protesters to avoid police surveillance. ‘We should take hanging nooses to the next protest like they did in Lebanon’, said Jane, as the protesters discussed tactics on how best to dismantle the lockdown policy in place across Victoria.

‘This is why our guns were taken away’, said David, ‘so commie rat bastards can control everything we do’.

This is typical of the kind of discourse that has characterised an anti-lockdown movement made up of disparate groups with often contradictory agendas. Even while Victoria’s restrictions look to be eased, the movement has maintained momentum as protesters share misinformation, conspiracy theories and hate speech.

Months ago, I joined several Facebook groups where members pushed an agenda against vaccinations and modern medicine under the leadership of New Age wellness influencers such as the Wintersteins and chef Pete Evans. This ‘tribe’, as they refer to themselves, began to converge with several far-right groups that had similar grievances about the lockdown.

The convergence has created some seemingly strange bedfellows, as far-right senator Pauline Hanson sought new allies from within the anti-establishment wellness community by declaring her opposition to vaccinations. Meanwhile, chef Pete Evans, who has questioned the existence of the pandemic while spruiking an expensive light machine he claims can cure the virus, has found an ideological ally in Alan Jones. Posts by self-proclaimed ‘Ozraeli’ and right-wing provocateur Avi Yemini are shared frequently by the group, as are those by neo-Nazi Blair Cottrell, suggesting that the movement is confused as to who their intellectual leaders are.

These seemingly disparate sections of Australian society are united by their shared scepticism about peer-reviewed science, a distrust of mainstream media, a belief in a deep state and a performative spirituality that elevates them above the ‘unawakened’.

‘Dear Woke Community’, member AKL posted. ‘It is scientifically proven that meditation alone or in a group not only provides mental and physical well-being, but also decreases warfare and terrorism.’ Another member contributed her ‘food for thought’, claiming ‘the Covid virus has a vibration of 5.5hz and dies above 25.5 Hz. For humans with a higher vibration, the virus infection is a minor irritant that will soon go away’. Suggested remedies for activating one’s ‘merkaba’ included meditation, yoga and tai chi, with the well-received message concluding with a ‘Namaste’.

In the lead-up to anti-lockdown demonstrations in September, Victoria Police cracked down on would-be leaders of the movement, charging several protesters with incitement. Fearing surveillance on Facebook, there was a mass exodus of the group to the largely unmoderated encrypted network known as Telegram, famous for its use by Hong Kong’s democracy movement.

With mass gatherings outlawed across Victoria, leaders of the movement looked to invoke the same ‘Be Water’ tactics popularised in Hong Kong, where impeccably organised protesters converged and dispersed quickly like a flash mob. Hong Kong protesters have successfully implemented a decentralised, leaderless model using Telegram and other technologies, but in Australia these methods have  largely failed

Raven wrote, ‘Better to have a large, brave, still crowd who are bullied into a huddle and arrested’—an option not possible in Hong Kong, where protesters face years of imprisonment for demonstrating.

An anti-lockdown demonstration intended to take place at the Shrine of Remembrance was called off after protesters announced via Telegram that the area had been swamped by authorities, instead suggesting they move to a park in Elwood, some 7 kilometres away.

‘Cops are nowhere to be seen. Get to Elsternwick park for the biggest party Melbourne has seen for months!’, announced the Guardian Angel Telegram account that livestreams the protests. ‘Elsternwick is too far for people to walk if in the middle of the city!’, Michael replied. ‘They stuffed it. I’m out.’

Some protesters begin to gather at the southern end of the park, but it wasn’t long before buses of police descended upon the playground. Unsure who was leading, the protesters turned to their phones to see the instruction from Guardian Angel: ‘Everyone! Join the thousands of freedom living [sic] people hanging out at the beach!! It’s packed! Elwood beach is going offff”.

A group of twenty-five walked towards the beach but were tracked by police and a news helicopter as they attempted to blend in with the sunbathing locals. Those who had evaded the first interception were chased towards Ormond Village. One protester lay motionless on the ground after being apprehended, and some on the chat claimed that he had been killed.

This kind of chaotic disorganisation has plagued the movement and could be symptomatic of its inability to find a clear and consistent message. The movement’s affinity with conspiracy theories means members are inundated with misinformation, making it difficult to know who or what to trust. Leaders of this specific demonstration were accused of operating as a ‘psy-op’ instigated by Victoria Police to embarrass the movement. Worryingly, nestled among conspiracy theories that paint Bill Gates as the orchestrator of the global pandemic are more sinister theories that blame Jews for the crisis, echoing smears seen in previous pandemics such as the Black Death.

One member, ‘Dave’, went largely unchallenged when he blamed Jews for the pandemic, while he and other members pushed the conspiracy theory that Jewish philanthropist George Soros was destabilising Western democracies by funding progressive institutions. Even Victoria’s governor general, Linda Dessau (who is Jewish), was accused of being party to the plot by refusing to remove Premier Daniel Andrews from office.

One Jewish member of the movement announced her departure from the group, declaring, ‘I refuse to hear the sh*t that is running on this channel about Jewish people’, but she was drowned out by an onslaught of posts citing anti-Semitic theories, including one accusing media personalities Rafael Epstein, Jon Faine and Neil Mitchell (all described as Jewish, although Mitchell is not) of conspiring to push a narrative of the crisis that painted Andrews as a hero.

As Facebook moves to ban pages promoting the far-right QAnon conspiracy theory, some moderators on the Telegram groups have similarly vowed to exile members who promote hate speech. However, banned members have responded by creating rival groups where racism and anti-Semitism are tolerated.

Meanwhile, many in the movement exhibit paranoia and evidence of other mental-health issues. A study published by the Journal of Medical Internet Research suggests that those who believe COVID-19 was developed intentionally are more likely to report psychological distress and anxiety as well as reduced job and life satisfaction. The Addiction Centre considers adherence to conspiracy theories a behavioural addiction that perpetuates a cycle of distrust and disempowerment.

One member posted videos publicising his suicidal ideation, to which other users responded by encouraging him to meditate. Suicide rates are weaponised by the group as evidence of the lockdown’s inhumanity (though there has been no increase in suicide rates during the lockdown, according to statistics provided by the Coroner’s Court). Those discussing suicide are not counselled by members to seek mainstream medical help.

‘I watch people around me get on with the new norm’, Dee Dee wrote, ‘we are heading towards Genicide [sic] by the NWO and the vax. I was shaking for a few weeks. Knowing our helplessness. No where to run, no weapons to defend ourselves’.

The movement’s dramatic rise raises questions around funding for education and mental health, and while the Coalition government doubles fees for humanities degrees, thousands of vulnerable Australians are being mobilised under an agenda that seeks to re-write history.

With lockdown restrictions extended yet again, the anti-lockdown movement has entered the political mainstream, as thousands of Victorians from diverse backgrounds demand an end to one of the world’s longest lockdown periods. Though with much of the online discourse being driven by duplicitous members of the far Right hell-bent on exploiting the crisis for political gain, the movement risks fuelling further partisanship in the response to the pandemic.

Though the movement remains in its infancy, and is plagued by disorganisation, in-fighting and conflicting misinformation, Australia remains at risk of a resurgent far Right empowered by growing dissatisfaction about the government’s response to COVID-19.

Scobie McKay is an independent researcher and journalist, specialising in fringe political movements, subcultures and criminology.