Of Fire and the Plague 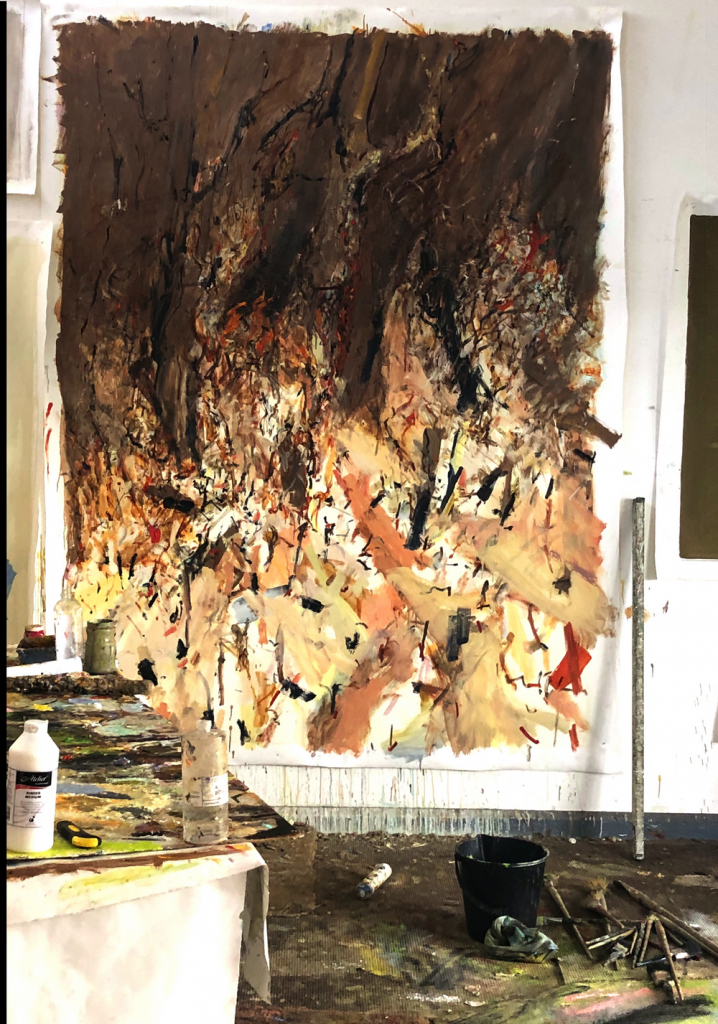 In late December, at the very peak of our region’s fire emergency, somebody rang our Rural Fire Service (RFS) headquarters and complained: ‘Why haven’t you put the fires out?’.

There are parallels between the current pandemic, the recent fire emergency and ‘wildfires and humans’ more generally. Both fire and viruses are expressions of cellular life itself. Plants absorb carbon dioxide, water and trace minerals, and then use sunlight to turn that into twigs and leaves. Heat and dryness turn those twigs and leaves into fuel, and fire then turns that fuel back into carbon dioxide, water and mineral ash. Rain prompts another turn of the great wheel. If there was no plant life, there would be no fire.

When a wildfire first starts, if you can get in quickly, build containment lines and hit it hard, with luck you can suppress that fire before it has a chance to really get going. But if that chance is lost—if the fire has become many kilometres wide, is spotting miles away and fuel is plentiful and very dry—then attempts at suppression become a foolhardy risk of life as well as a waste of time and energy.

So the strategy changes: evacuate the vulnerable, the impossible to defend. Defend that which can be defended, wait for the fire to burn itself out and pray for rain.

It seems to be the same for pandemics such as COVID-19. Suppression can work if the outbreak is small and you’re quick and have some luck. But if a virus has already spread widely, is spotting even more widely and there is plenty of fuel, attempts at ’broad brush’ suppression are a waste of time and resources and possibly even dangerous.

For example, in response to the pandemic Vietnam acted quickly. The country commenced border restrictions on 1 February 2020 and got on top of small local outbreaks. To date, Vietnam has had zero COVID-19 deaths. The mixed results for nations that did attempt widespread suppression after their ‘fires’ were already too big to contain makes me think that local factors akin to variations in terrain, weather patterns and fuel loads were more important than anything else. For example, in the United Kingdom it appears that too many assets were allocated to the defence of hospitals and too few to the defence of aged-care facilities.

The contrast between the low death toll in Japan, which did not do a nationwide mandated ‘lockdown’, and the much larger death toll in the United Kingdom, which did, is striking. I began to think about the similarities between viruses and wildfire after reading about the stark contrast between the position of Sweden’s health authorities regarding COVID-19 and the positions of the health authorities of most other European nations. I was reminded of a long dispute over how best to approach wildfire that can be caricatured as: ‘all fire is bad fire; it should all be suppressed’, versus ‘some fires are good; we should act to mitigate but not suppress’. One of the things that the two positions have in common is that, historically, in practice, neither approach has ever worked perfectly in Australia. There will always be lightning strikes resulting in the fire that got away on a windy day after a long drought. Equally, doing hazard reduction, cultural burning and the like on the enormous scale needed year after year is not practical, at least not in the populated south-eastern parts of Australia. One such lightning strike hit on the night of 25 November 2019, starting a fire on Black Range about twenty-five kilometres west of the town of Braidwood, New South Wales, where I live. For various reasons the RFS was not able to get to that fire before it was too big to suppress. By Friday 29 November the fire had grown large; it was burning just 8 kilometres from Braidwood, and over the next few days things were touch and go on the outskirts of the town. The view from our front balcony was livid with burnt debris landing everywhere. We watched a DC-10 air tanker drop fire retardant on Jillamatong Hill just 2 kilometres from us. However, the regional RFS was able to deploy a lot of assets to the town’s defence. According to a report from one of the local RFS brigade captains, road graders ran over the paddocks near the fires at ‘40 kph for thirty hours, nonstop’, building containment lines.

By 5 December the town was out of serious danger. In hindsight, Braidwood was fortunate that the fire that most directly threatened it came early and was a relatively cool fire. After it had burnt through the sixty years of fuel load that had accumulated in the great forests just to the west of us, we were, to a degree, immunised from the worst of the fires. Attention then shifted to the vast forested regions and national parks surrounding the settled areas that stretch from Eden to Nowra. The worst of the fire season was yet to come to our region and the adjacent south coast.

By mid-December the conditions were shocking: very hot, no ground moisture, and with dry, hot north- westerly winds. The fires to the east of us, which came to be called ‘the Beast’ started to really get going at the end of the first week of December. We will never forget the first time we saw a pyrocumulonimbus cloud rising about 30 kilometres to the east; it was beautiful and very frightening. I knew that at the base of that cloud, the temperature must be comparable to ground zero in Hiroshima.  (A CSIRO report on the Ash Wednesday fires of 1983 estimated that the temperature at Cockatoo in Victoria’s Dandenong Ranges reached 3000 degrees Celsius.) The carnage inflicted by the Beast continued to grow: Lake Conjola, Mogo, Rosedale, the outskirts of Batemans Bay, Moruya and Cobargo, and a murderous New Year’s Eve.

In Braidwood we lived through a time dominated by an all-pervasive smoke stench of burnt flesh; of streets where the only movement was the endless queues of RFS, SES and other emergency-services tankers refuelling, and day after day of asking: Northangera Rd, Back Creek Rd, Charleys Forest, Farringdon, Monga, Mongarlowe, Araluen, Krawarree and so on—did they get through today?

As the long days of unrelenting 40-plus-degree heat with very strong north-westerly winds set in, I kept thinking, ‘I’m glad that the big forests to our west burnt out when it was still cool and the winds were so much weaker.’

Returning to the analogy between the fires and the virus, something makes me uneasy about Australia’s success in suppressing COVID-19 to date. In Australia we have no ‘herd immunity’: we still have plenty of ‘fuel’ for the virus to burn. The virus is still smouldering, largely stifled, in Australia, and actively burning in many other places around the world. Embers will continue to land here, and we have already gone through a lot of our resources and assets. Meanwhile, life is thoroughly disrupted, and unemployment, recession and austerity are all set to intensify, reducing our ability to respond. I don’t know what kinds of strategies we should follow when this virus or the next pandemic inevitably flares up again, but I am certain that a rigid, one-size-fits-all strategy is not the way to deal with either wildfires or pandemics. We need to take an approach akin to cultural burning: more nuanced, responsive to local terrain and conditions, adaptive to circumstance, and flexible.

John R Walker is a professional practising artist whose principal interest is the Australian landscape and environmental history. He has been making art and exhibiting for 40 years and his work can be found in major Australian public and private collections. A full biography can be accessed on his website

Great Article John
Those grader drivers were amazing Matt Dojo and I were chasing Possum ( Don’t know his tax Name) down the hill behind my house as the fire was raceing through for the second time . His grader was dancing over the rocks his front wheels were independently flying a meter off the ground . We were putting out the bits that reignited or simply he danced over .
Jillamatong ended up with around 15 km of graded tracks mainly as fire breaks .in February when the rains eventually came we sowed multi species into them to repair the bare baked ground have some amazing dicon radish and sunflower come up to help the pasture sp establish.

Martin, thanks. Re the Daikon radish – they make the best Chinese steamed radish cake. Can I trouble you for some daikon? 🙂 It was a pretty intense time. The title of the painting is ‘Fireground #2 (for Matty H)’. Perhaps let Matt know.

Nice parallel between the two disasters.
There is also the disruption of the first effecting response to the second, the human spirit coping with twin disasters.
Just as life in the bush is vulnerable to fire, so too are we vulnerable, and thus, help help, and help that is paid and effective. It line of defence is always the family and local community. They should be given all the support that can be spared, so they can pick up their lives, and start again. ll the best for the south coast and Monaro communities in their endeavours.

You’re right.Most countries implemented bespoken schemes that reflected their understanding of the science ,the stage of the infection cycle they were in , the medical resources at hand ,their perceptions of which of their citizens were at risk -and the fears they had about their economies.Many strategies and tactics were tried.In terms of deaths per capita Australia has done very ,very well ,so far.If we can avoid a second wave we will have done even better.
For the first time in a long time our governments worked together in the national interest.The National Cabinet listened to ,and backed , expert medical advice .State governments acted with flexibility developing policies appropriate to their specific jurisdictions’ health needs.The federal government threw huge amounts of money at the economy to keep it on life support until the crisis passed.For the first time in over a decade we saw what our polity can achieve when it stops playing power games and the trading of vested interests.Our job as voters is to stop them sliding back into their bad old habits.

Hi Tim
Hopefully the National Cabinet can do better regarding the 120 years of conflicted mess that is public policy re water and the Murray Darling system.

Thank you John for helping come to terms with the twin headed menace that confronted us this summer. Nature once again puts us firmly in our place, leaving us both dazed and daunted by it’s brute force – though so often dazzled by the great diversity of it’s beauty. There are so many lessons to be learnt if we are only perceptive enough to identify them.

My exhibition of new works, ‘Fireground’, will at Utopia Art Sydney from 4 – 25 July 2020: http://www.utopiaartsydney.com.au/exhibitions.php