Neoliberalism, the Deluge and the Logic of Government Inaction 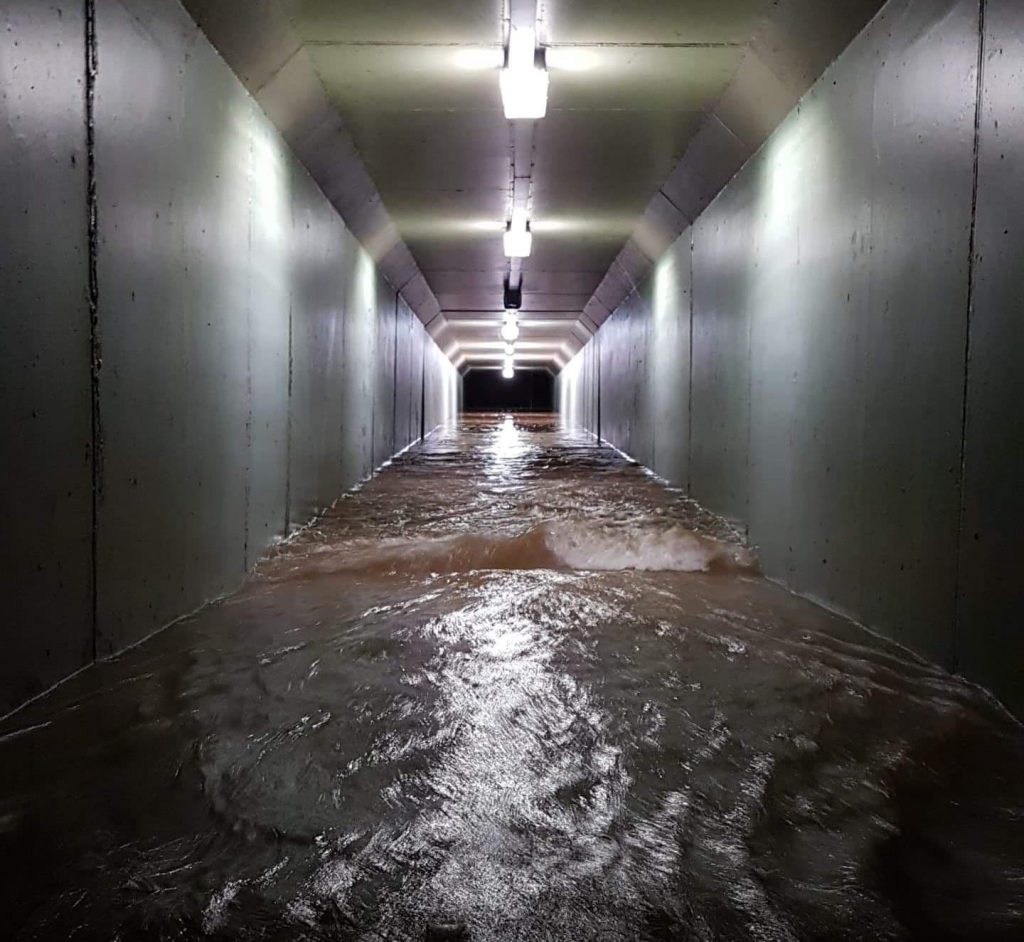 Pedestrian tunnel flooding in the suburb of Tanah Merah, in south Brisbane, 2022.

There is an obscure but very real connection between a Queenslander being ferried by a neighbour in a tinny from their inundated home in the recent floods and a small gathering of economists and others in a Swiss Village in 1947. The connection between them provides a logical, if ethically unjustifiable explanation for the reasons why the flood victims, and before them the victims of last season’s bushfires, have largely been abandoned by the Liberal and National Parties, and left very much to ‘get on with it’ by themselves.

The meeting in April 1947, held at the Hotel Du Parc in the Swiss Village of Mont Pelerin, marked the inauguration of a global economic system that has dominated the political ideology of mainstream political parties across the world since the early 1980s Economists Friedrich Hayek and Milton Friedman, began to devise the blueprint for what has since been termed neoliberalism. Unlike its forerunner, classical liberalism, the neoliberal agenda has included a role for a strong state as enforcer of the ‘freedom’ of the marketplace.

The Mount Pelerin Society (MPS) which has met annually since 1947 has influenced right-wing think tanks in numerous countries for at least seven and half decades. The online fact-finding organisation DeSmog, which counters climate change misinformation, estimates that MPS members are also affiliated with over 100 right-wing organisations around the world. These organisations include the Cato Institute, the Hoover Institution, and the Heritage Foundation in the United States; the Adam Smith Institute in Britain, and the Institute for Public Affairs in Australia. For two years from 2006, Greg Lyndsey, founder of another Australian neoliberal think tank, the Centre for Independent Studies (CIS), was also MPS president. The sole purpose of these think tanks has been to implement economic, social, cultural and political change through their alignment with right-wing political parties. Far from being independent, CIS has hosted John Howard, Tony Abbott and Milton Friedman himself, as well as British Conservative politicians. The legacy of the MPS is a lineage of right-wing think tanks allied to right-wing governments across the globe, including the current Australian government.

Hayek and Friedman’s economic plan was realised in the dictatorship of General Pinochet in Chile and the governments of Ronald Reagan and Margaret Thatcher. Living in Britain throughout the 1980s and 1990s was to experience not only profound political and economic shifts but, more deeply perhaps, the social and cultural transformation of the moral fabric of the nation. Thatcher adeptly translated Hayek and Friedman’s thinking into language everyone could grasp, presented in nifty sound bites. Common among them were catchphrases like ‘you cannot spend what you do not have’, a resounding truism that working-class people understood as the reality of their lived experience of managing tight domestic budgets to avoid falling into debt.

Thatcher normalised neoliberal ideology , but the reality  was social division, increased poverty, a growing gap between rich and poor, which has ballooned to extraordinary proportions in the present period. Her most  famous sound bite; ‘there is no such thing as society, there are only individuals’, remains, a statement of such profound consequence because it underpins the fragmentation of collective provision and historical forms of collectivism, and collectivist thinking.

The first priority of neoliberal governments is not the welfare and well-being of people, but the freedom of the marketplace to operate without impediment. However, there is a contradiction here because neoliberal governments operate to support capital and thereby do ‘interfere’ in the market. Instead of maintaining public provision, public assets have been privatised, at bargain prices, and money continues to be siphoned off from the public coffers into corporate funds under the guise of ‘public good’. Writing in The Guardian on 18 March 2021, Paul Kemp reported that ASX300 companies had banked $3.8bn of government subsidies, with $2.5bn coming from Job Keeper alone. These profitable companies were happy to take public money, and the Coalition government was happy to give it to them, while many  suffered terrible privations caused by the pandemic and lockdowns.

The net result of these seven decades of neoliberal ascendancy is deeply divided societies in which the wealth disparity between the top 1 per cent and the rest grows ever wider. One empirical indicator of the measure of increasing poverty is the proliferation of foodbanks. In just one year, from April 2020 to March 2021, The Trussell Trust in Britain, which runs a network of foodbanks across the country, saw a 33 per cent increase in the number of food parcels distributed to impoverished people. In the last five years, the Trust has seen a 123 per cent increase in foodbanks. Even this figure does not reflect the enormity of the situation. The problem in Australia may be even worse. Here, OzHarvest is just one of several national food distribution charities; its provision of meals increased from 3 million in 2011 to 36 million in 2021.

Neither Britain nor Australia can be considered poor countries, ranking respectively the fifth and twelfth richest countries in the world. Foodbanks, charities and growing numbers of poor people are the consequence of policy and  ideological commitments, not economic necessity. So, on the one hand neoliberalism has created huge economic divisions within populations, even in wealthy countries. The ‘reserves’ of economically impoverished people provide cheap sources of labour for the maximisation of profit in a ‘free’ market place. On the other hand, neoliberal governments adopt a hands-off approach to welfare provision, leaving such work to charities and volunteers.

This brings us back to our neighbour rescuing people from flooded homes in Queensland and New South Wales. It is not that the Liberal and National Parties are so much slow to act in the event of national emergencies as it is that they do not act because it is not in their ideological DNA to do so. What we have seen play out on the national stage during the bushfires, the pandemic and the floods is not government negligence so much as the neoliberal logic of ‘small government’; a hands-off approach in which the population has become acculturated to general acceptance of ‘TINA’ (There Is No Alternative). Coordinated emergency relief is almost wholly replaced by individual altruism and communities of exhausted, homeless, hungry and traumatised people are left to fend for themselves. The large corporations and the fossil fuel industries, perpetrators of climate change, and thereby implicated in floods, droughts and bushfires, are rewarded with large government subsidies.

Coordinated action to mitigate climate-induced disasters and to use the $4.5b national Disaster Fund strategically risks the Liberal and National Parties actually having to acknowledge Australia as a ‘front-line nation’ in the battle against climate change. In the neoliberal lexicon ‘human freedom’  means the freedom of capital to accrue ever greater wealth in an ‘unfettered’ market: the supremacy of markets over people’s lives, no matter the human costs, the proliferation of charities in place of systematic, properly resourced societal provision; and the collapse of the eco-system. The logic of neoliberalism means that in the face of ecological and human disaster, a lone person in a tinny must ferry stranded neighbours to safety, while being gaslighted by a hands-off prime minister for daring to complain.

The Australian Way meant ‘technology, not taxes’. The airy assumption here is based upon technology that has yet to bear fruit and upon a total absence of modelling and detail.