Neo-fascism and the Culture of Silence 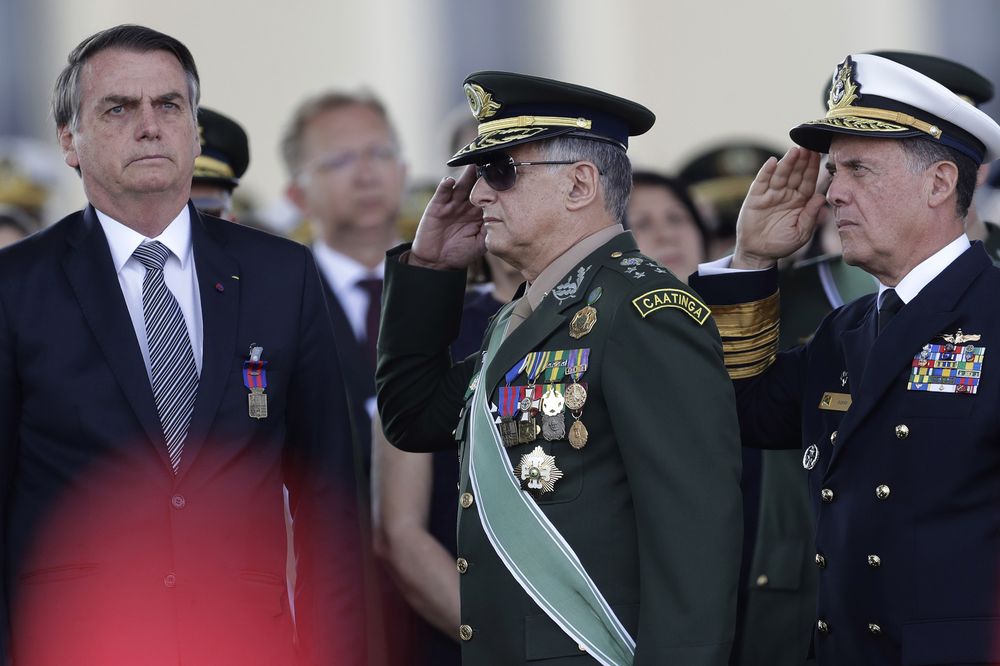 The health system in Manaus, Brazil, has collapsed. Hospitals are overwhelmed and supplies of oxygen are rapidly depleting. Warnings that the oxygen supply was running out came to local- and federal-government officials a week before the calamity led to mass death by asphyxiation in patients afflicted with COVID-19. Local health officials knew in early January that an oxygen shortage was imminent, but their warning did not carry any weight. A private contractor who had the job of providing the oxygen informed the government six days before the city ran out of this crucial supply in the fight against the pandemic.

Against all evidence, on 15 January 2021, neo-fascist president Jair Bolsonaro—who has denied the gravity of COVID-19 and stated that he will not be vaccinated—said that the government had done what it could in Manaus. ‘The problem is terrible there. Now, we have done our part.’ While giving a television interview on the situation in Manaus, his nonchalance and falsity reached its apogee. ‘I should be at the beach right now’, he said on Band TV, adding that his health minister was doing an ‘exceptional job’.

In Lineages of the Present: Ideology and Politics in Contemporary South Asia, Aijaz Ahmad writes: ‘What the Far Right visualizes and prepares for is not a frontal seizure of power but a hurricane from below, carried out by a widespread and pliable mass of the wretched of this earth led by a well-disciplined counter-revolutionary elite’. From this condensed description of right-wing politics we come to understand one primary feature of contemporary neo-fascism: it is a movement seeking to carefully craft hegemony—a complete fusion of political, intellectual and moral leadership that brings groups together through the intermediary of ideology.

According to Antonio Gramsci, an ideology succeeds in cohesively cementing a new historical bloc when it manages to ‘spread throughout the whole of society determining not only united economic and political objectives but also intellectual and moral unity’. Influence, leadership, culture, ideology and organisation are all involved. For Gramsci, hegemony is not domination by means of force; it is the even combination of coercion and consent, eventually resulting in politico-intellectual leadership over the groups whose consent needs to be sought.

The example of Brazil

In Brazil, Bolsonaro has carved hegemony through the ‘the bull, bullet and bible bloc’—a coalition based on connections with the agribusiness sector, military and police forces, and the evangelical religious Right.

First, the link between agribusiness and the Bolsonaro administration is inseparable and mutually beneficial. Agribusiness exports have improved the trade balance for the Bolsonaro regime, the industry in turn exerting significant influence on government policy, specifically by providing the Central Bank with reserves to change the value of currency and pacify foreign creditors.

Under Bolsonaro, agribusiness interests have championed removing environmental restrictions and opening Indigenous people’s territory for sale and economic exploitation. This is a direct result of his anti-Indigenous rhetoric, which performs the two tasks of gratifying his political constituency and providing a suitable investment climate for agribusiness operations.

Second, members of the bullet coalition promote deregulation in terms of gun sales and fund Bolsonaro’s campaign with money coming from the arms industry. On the cultural front, a pro-armament stance aims to symbolically suture the economic disempowerment suffered by Brazilian men under neoliberalism through a hyper-masculine code of violence.

Close connections with the armed forces enable Bolsonaro to practise ‘penal populism’—the infusion of emotive expressions into the criminal-justice system. He has proposed a law that gives full immunity to police officers and soldiers who kill someone in self-defence while they are engaged in a ‘Guarantee of Law and Order’ mission. This is his sensational war on crime, which sanctifies state-sponsored violence and allows military personnel to casually murder anyone.

Bolsonaro has further energised the military unit’s hair-trigger temperament by blithely saying that this law will ensure that ‘criminals die like cockroaches’. The natural result of Bolsonaro’s policy of retributive justice is deeply alarming. Brazil has become an abnormally belligerent nation with one of the world’s most violent police forces.

Third, the evangelical Right has closed ranks with Bolsonaro to repress any discussion of issues of women’s health, abortion, gender and sexuality. The evangelical bloc constitutes a cohesive electoral grouping, organised primarily in the bancada evangélica (evangelical caucus), a network of evangelical lawmakers with whom Bolsonaro consistently colludes to promote the collective aim of extirpating a ‘dangerous gender politics’.

Apart from signalling the onslaught of misogynistic views, the rise of evangelicals represents the replacement of the theology of liberation with the principle of prosperity. While the Catholic Church advocates collective, political liberation as the principal way for the poor to improve their condition, evangelicals embrace individualism. The theology of prosperity encourages the faithful to follow an entrepreneurial approach to financial life to generate personal economic stability and allow the consumption of material goods. In other words, this is a Thatcherite message of self-help and hard work.

Insofar that neo-fascism arises organically out of locally shaped contexts, it has used diverse tactics to continually build, rebuild and preserve its hegemony. One of those tactics is the creation of a ‘culture of silence’. A culture of silence refers to a social situation where citizens are turned into passive spectators of the misery and suffering inflicted on others. They consciously choose to refrain from saying anything about a fully formed regime of xenophobic violence, sliding down into a normatively ambiguous space of subdued uneasiness.

Usually, silence derives from an extremely ambivalent political consciousness: the person maintaining silence constantly tries to repress his/her knowledge of the gravity of the violence being done to the targeted communities. But since that individual is cognisant of the brutish nature of that violence, they are caught between being repulsed by that cruelty and preventing that repulsion from surfacing publicly. Slowly, the repression of an indignant response to the morally horrifying nature of systematised discrimination gives way to entrenched silence.

In Brazil, Bolsonaro has repeatedly used the silence over the history of the dictatorship instituted in 1964—a regime that systematically tortured several thousand citizens and killed or disappeared hundreds more—to facilitate his own politics of cruelty. In 1993 Bolsonaro openly declared that he favoured the dictatorship, and in 2016 he stated in a radio interview: ‘The dictatorship’s mistake was to torture but not kill…I’m pro-torture, and the people are too’. Such statements are enabled by the absence of any memory initiatives after 1985—the year the dictatorship ended. For decades, Brazil was the only post-authoritarian country in South America that had neither established a truth commission nor tried state criminals for their actions during the authoritarian period, let alone reformed the military, police or judiciary.

By capitalising on the society’s silent approval for the military dictatorship, Bolsonaro has activated the recesses of memory concerned with the history of violence, thus whipping up mass hysteria. He has refined the edges of a memory that remains painfully unresolved in the collective subconscious, giving it a contemporary character in the process. As a result of these political tactics, intermediate tiers of the social structure—the downwardly mobile lower middle classes and the petit-bourgeois layer of commercial retailers and liberal professionals—have come to silently witness the ruthless persecution of environmentalists, Black and Indigenous people and the LGBTQ+ community.

A culture of silence provides us with an important insight into the nature of hegemony: control over the population is best maintained through complicity in one’s own oppression. Hegemony on a micro level refers to all those ways of governance that aim to shape, guide, manage or regulate the conduct of persons. The relationship between governing and governed is a dual one. Individuals are the governed subjects, but at the same time they are the partners of the government.

Individuals become the object and co-participating subject of the state. On the one hand, the Right uses modes of repression to discipline and objectify certain communities and subjectively elevate its support base. On the other hand, it outlines a possible art of political government that uses the language of racism, authoritarian populism and ideologically saturated violence to carve a normative field whose reverberations bolster a culture of silence. In this way, individuals start practising appropriate forms of ‘technologies of the self’. They are at once governed by others and involved in the practice of self-governing.

Instead of being unchangeable, a culture of silence is challengeable and capable of being destroyed. Power is actively generative rather than merely prohibitive, restrictive or negating—it opens the path to the articulation of meanings even as it limits the field of possibility. Individuals have the capacity to contest power by critically assessing their own lives and constructing their identities in ways that resist dominant discourses. We constitute a subject who is not merely passively moulded by power but able to dynamically participate in the fashioning of its own subjectivity.

Insofar that self-participation is necessary for the formation of a culture of silence, it can be fractured by education, organisation and agitation. In Turkey we are seeing the preliminary stages of this anti-fascist campaign in the form of student demonstrations against Recep Tayyip Erdogan. Comprising a wide-ranging cultural base, the protests have coupled a fight for academic autonomy with opposition to Erdogan’s ultra-dogmatic interpretation of Islam. In this way, students have actively participated in the discursive dynamic initiated by neo-fascist forces to reconfigure it according to their own ideological imperatives. It is urgent that we begin this process of counter-hegemonic articulation in other parts of the world before silence decays into total submission and leaves a deep scar on the moral psyche of people.

The Brazilian Crisis: The Conflict of Past and Future in Brazil’s Current Crisis

Were they really opposing corruption, or it was mainly an explosive way to direct repressed anger against the rise of those they do not recognise as their equal fellow Brazilians? As our popular political saying teaches us, ‘in Brazil even the past is uncertain’.

Yanis Iqbal is a student and freelance writer based in Aligarh and is interested in studying the existential conditions of subaltern classes. He can be contacted at yanisiqbal AT gmail.com