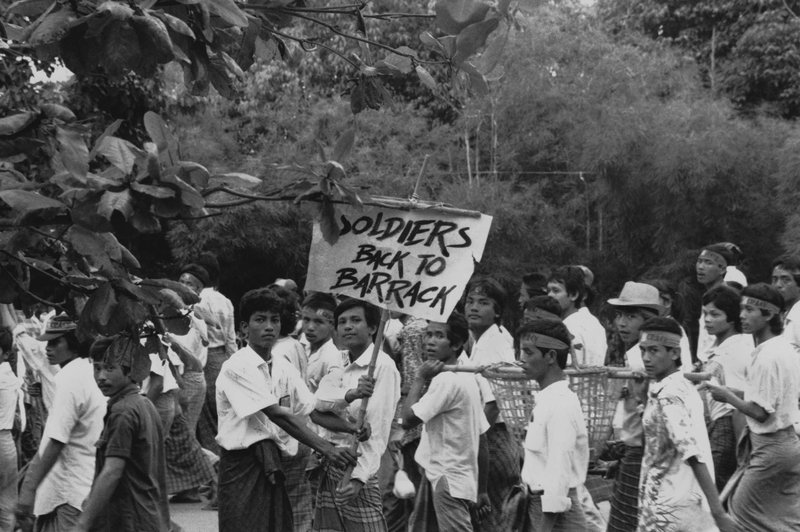 Convincing Burmese soldiers to leave their posts and join the uprising was one of the demonstrators' primary goals in August and September 1988.

Myanmar’s recent military coup was a shock, especially for subscribers to the view that democracy is inevitable. But it wasn’t a surprise to anyone who has observed the country’s contemporary history.

The National League for Democracy (NLD), headed by the revered Aung San Suu Kyi, recorded a strong, 60-per-cent majority in the country’s 2015 elections. The military’s ‘civilian’ front party, the United Solidarity and Development Party (USDP), won 5 per cent, with the rest going to minor parties, mostly representing the ethnic regions.

Media commentary to the contrary notwithstanding, Myanmar had not been a democracy since 2011, despite elections in 2010, which the NLD boycotted as Suu Kyi was still under house arrest. That election was marred by claims of violence, intimidation, bribery and fraud. It was the 2015 outcome that ushered in the first period of genuinely civilian rule since 1962.

An election-observer report I wrote from Yangon in 2015 noted that Myanmar was not yet a true democracy, as a quarter of parliamentary seats remained reserved for the military, the Tatmadaw. At least as importantly, four of the government’s key ministries; Home Affairs, Defence, Border Affairs and Internal Affairs, were also reserved for the Tatmadaw.

But most importantly, Myanmar’s constitution, written by the Tatmadaw and passed in the immediate wake of 2008’s devastating Cyclone Nargis, created an unelected, Tatmadaw-dominated National Defence and Security Council (NDSC), which formally sits above the parliament. Under the 2008 constitution, the NDSC can revoke the writ of the elected parliament at any time for any reason.

In the five years since 2015, the NLD and Suu Kyi trod delicately in their relations with the Tatmadaw. Suu Kyi in particular has been internationally criticised for not speaking out against the Tatmadaw’s genocide against the Muslim Rohingya minority in the west of the country.

As nominal head of government—citizens with immediate family who are citizens of other countries cannot become president—Suu Kyi has been careful not to anger the Tatmadaw. To do so would threaten her government. However, as the daughter of her nationalist father General Aung San, Suu Kyi is also an ethnic Burman nationalist. As leader of an effectively Burman nationalist party, she has not wanted to alienate her own supporters and has not been inclined to do so in any case.

In November 2020, elections were held in which the Tatmadaw cancelled voting in many areas and the NLD used state-owned media to campaign, excluding non-NLD parties. The elections were imperfect, but they broadly reflected the will of a majority of Myanmar’s citizens.

The NLD won an astonishing 83 per cent of the vote. With the hubris of such a compelling victory, some NLD leaders began to say it was becoming time to reconsider the constitutional role of the military.

The Tatmadaw is not particularly imaginative. Looking to discredit the election result, the Tatmadaw turned to the United States, borrowing from Donald Trump’s empty claims of ‘electoral fraud’.

Myanmar’s independent election commission said it could not investigate claims of electoral fraud as no evidence was presented that fraud had been committed. The Tatmadaw, however, held the NLD to account, in effect requiring it to admit electoral fraud and give up some of its parliamentary seats, perhaps even the prime ministership. The NLD did not respond.

The Tatmadaw then looked to its immediate eastern neighbour, Thailand, for next steps. In 2014 the Thai military staged a coup, rewrote the constitution to ensure that the military and its business associates would dominate, then called elections in which the effective outcome was known before the first ballots were cast. The Tatmadaw’s senior general Min Aung Hlaing saw this as a suitable model.

The coup, however, was not as simple as the military taking over government. Within the Tatmadaw have been reformist as well as hard-line factions. After a couple of failed attempts, it was the reformist faction that encouraged the Tatmadaw towards an open electoral process.

The Tatmadaw reformists argued that, as Myanmar’s economy opened up and greater financial opportunities beckoned, the country’s extensive military-controlled business would do well, as would individual officers. They also reasoned, by writing a constitution that retained the Tatmadaw as the real power in the state, that there was nothing to fear from allowing an eventual civilian government. The hardliners agreed.

It is conventional democratic transition theory that military reformists in positions of authority are the best positioned to lead and secure change from authoritarian government. Around the same time that these changes were taking place—2008–11—the hardliners marginalised the reformists within the Tatmadaw and re-established their primacy.

As Myanmar has opened its economy, China has increased its status as the country’s overwhelming trading partner, as well as being a key supplier of military hardware. While there is no evidence that China was behind the coup or even gave the go-ahead, it is likely that the Chinese government would have been sounded out by the Tatmadaw regarding its intentions. A military coup that was not accepted by China would be disastrous for the Tatmadaw, in economic, diplomatic and military terms.

On 1 February this year the Tatmadaw struck, arresting senior members of parliament in pre-dawn raids, eventually expanding its intake of prisoners until all NLD leaders and other political activists were in custody. That afternoon the Tatmadaw announced that it had taken over government, which was by then expected. Within a few more hours, the Tatmadaw announced that it would remain in power for a year before holding fresh elections. The civilian protests were immediate and have grown in size since then.

The Tatmadaw has a reputation for brutality, not least for its massacre of protesters in 1988 and attacks against protesting Buddhist monks in 2007, as well as against the Rohingya. Less visible has been the Tatmadaw’s long-standing military campaigns against ethnic insurgents.

The Tatmadaw has struck deals with some insurgent groups to control their own areas as ‘border guards’, in which they produce and export amphetamines and heroin, as well as other contraband. Others have resisted and the Tatmadaw has pounded them mercilessly.

Though the Tatmadaw initially took a hands-off approach to the anti-coup protests, as the protests have continued it has steadily increased repression, using greater direct force against protesters and arresting hundreds of protest leaders. In Myitkyina, the relatively remote capital of the rebellious northern Kachin State, the army has used live rounds.

Tatmadaw hardliners might be tempted to use even greater force but for two groups they need to placate. The first is China, as the country’s main economic, diplomatic and military backer, which does not want to be embarrassed by a wholesale slaughter as it attempts to establish its authority on the world stage. Able to exercise veto power as one of the five permanent members of the UN Security Council, China is critical to the Tatmadaw generals, who have long worried about UN-sanctioned ‘humanitarian intervention’.

Closer to home, the Tatmadaw can little afford to divide between military reformists and hardliners. While the hardliners have been dominant, Myanmar’s history has been one of internal division, and a split within the Tatmadaw could fatally weaken the new military junta. So, to date the Tatmadaw has been relatively tolerant. But that tolerance is reducing by the day and, as with any military coup, guns remain an option.

The Tatmadaw has promised elections, but—as in Thailand following the 2014 coup—they will be elections where the Tatmadaw can secure the outcome before the first ballot has been cast. That will mean returning to something like the 2010 elections, which a hobbled NLD did not contest and in which the USDP secured an all but unchallenged victory.

Such an election could be held within a year, although that seems like a tight timeline given widespread public protest. The pro-democracy movement would no doubt seek to subvert such elections.

More likely is that the timeline will be longer. It may not be necessary to rewrite Myanmar’s constitution, given that it is already favourable towards the military. But it would be legally difficult to stop the NLD from competing and winning without a new, restrictive constitution or extensive vote rigging. Either way, the Tatmadaw is unlikely to cede political power in a year’s time. The best predicter of democratic success, the literature suggests, is prior successful democratic experience. On that basis, the Tatmadaw can be expected to remain in power, in one form or another, for the foreseeable future.

If the Rohingya fight back in Myanmar, what little food they get from the United Nations is denied them. If they leave, they are likely to be used as slave labour or tortured for money. If they manage to get on a boat they are turned back by Malaysia, Thailand, Australia.

Faced with this heartbreaking situation in Myanmar, I am also thinking about what I can do for the people of Myanmar.
Although I also want to go to the streets to demonstrate like the residents of other democratic countries, I also want to go to the streets to set up stalls to collect donations. But I am a Chinese. The Chinese government does not allow civilians to take to the streets to demonstrate, and the Chinese are generally indifferent to what happened to the Burmese people, and there are even people who cheer for the military government.
So I have only one way left. I try to write to all the presidents, prime ministers, political parties and human rights organizations I can find. Ask them to lead the government of their country to condemn and sanction the actions of the Burmese military government.
Although the demonstrations of the Burmese people are very great and hard, they still need more external support. I hope that the president, prime minister, political parties, and human rights organizations to whom I wrote the letter can give me a non-perfunctory response.