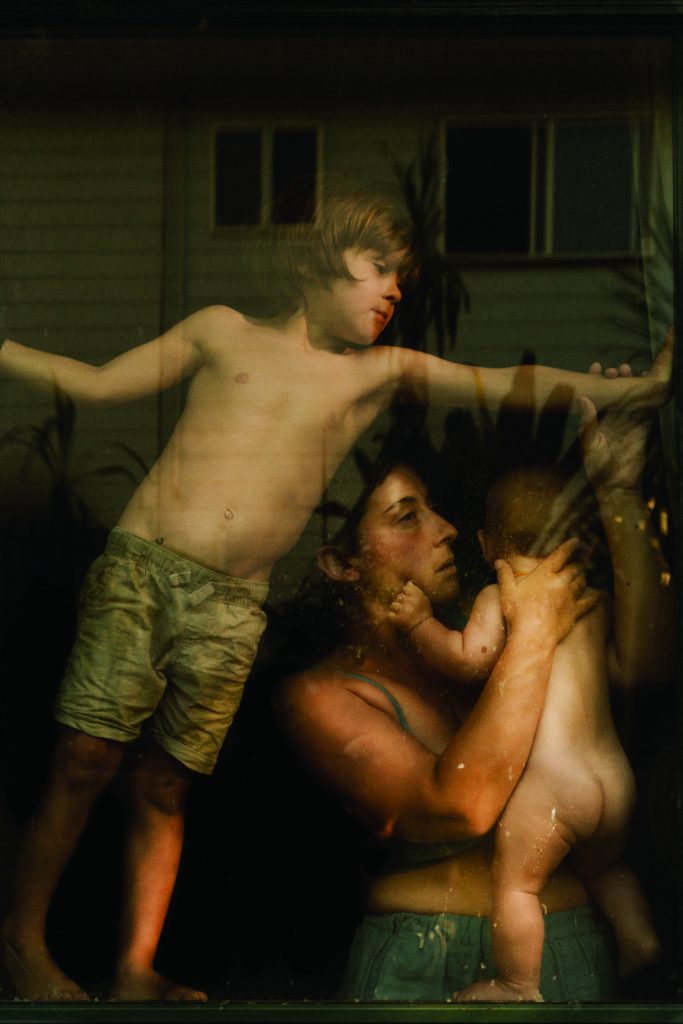 Late in 2019 Michael Leunig penned a cartoon in The Age of a mother pushing a pram while absorbed in her smartphone, apparently neglecting her child, who—without her noticing—had fallen out of the pram onto the ground. A stream of letters to the editor ensued, various interviews confirmed or otherwise the artist’s supposed misogyny, and Leunig himself responded in a lengthy article. Leunig has been embroiled in such controversies before, but whatever one thinks of his social critique, the responses to it may be just as worthy of dissection.

One such response at the time was that of young feminist Clementine Ford. Imagining herself as the maligned protagonist in the cartoon, she remembered wheeling her own very unsettled baby around and around the streets in a pram while urgently seeking support for her distress on her phone. How could Leunig be so cruel as to criticise mothers in this way? She wrote of being ‘terrified’ mothering her newborn.

Of all the stories we tell ourselves about motherhood, how did we arrive here? Motherhood as misery, as terror? Ford’s is not an isolated example. There appears to be an inclination today to see birth and early life with one’s baby as necessarily traumatic.

Coinciding with the publication of Leunig’s cartoon, last October also brought the birth of my fifth grandchild, and as she and her parents lived with me for the next four months I was cast back into that world of early motherhood (and fatherhood) and reminded of everything it encompasses, the ever-changing kaleidoscope of emotions attendant on becoming parents. In many ways my son and his partner had a difficult beginning: an unwanted caesarean for breech presentation, a birth injury to the baby’s right shoulder and arm, a suspected major congenital anomaly only ruled out two weeks after the birth. So yes, something like terror was part of their experience. But through it all, what I was witness to (and relived from my own experiences as a mother) was that deep, embodied joy of bringing a child into the world, the developing bond of maternal (and also paternal) love, the beginnings of a profound relationship with a new and vulnerable human being. In early motherhood there are certainly times of vulnerability, exhaustion, confusion, the challenges of navigating the world as a mother. It is definitely a journey into the unknown. But what significant relationship is not filled with all this rich kaleidoscope of human feelings? And certainly, so much more than terror and misery.

In the early 1980s, when I started having children, maternal misery was barely conceptualised in the medical literature. As it turns out, that might not have been an altogether bad thing. On the one hand, for women who were suffering, there was little recognition of that suffering, and little help was offered. How many women were affected was also unknown, as no rigorous studies yet charted misery (depression) prevalence in women following the birth of a baby. Motherhood was also still largely and simplistically portrayed as the most rewarding thing a woman could do. Second-wave feminists had of course begun to counter prevailing notions of blissful motherhood from the early 1970s on, with calls for men to share the work of childrearing, for women’s rights to maternity leave, and for women to be able to return to their jobs after childbirth and to have access to affordable childcare. But in mainstream Australia women were meant to feel (wholly) fulfilled by motherhood. And for mothers struggling with mental-health issues, shame and stigma meant that few sought help.

On the other hand, women were not subjected then to routine screening for depression during pregnancy and after birth, as happens today, nor were they medicated with anti-depressants for their distress anywhere near as often as they are now. Almost four decades later, there is certainly much greater recognition of maternal depression, but has this actually led to appropriate and effective social and health responses? Have rates of depression in mothers gone down?

The first population-based Australian research told us back in 1989 that around one in seven women experienced depression in the first year after a baby’s birth. Social factors such as feeling alone and being unsupported, being poor, never having time out from baby care and experiencing family violence have been shown time and again to be significant contributors to depression at this time in women’s lives—not hormones, not personality defects, not the simple fact of becoming a mother, not bolts from the sky. Much like depression at other times of one’s life, maternal depression largely has social roots, and feeling meaningfully connected to others profoundly reduces the risk.

In one recently published study, women who reported just one regular time each week when someone else cared for the baby were three times less likely to experience depression. Not that the baby was very often seen as the problem. Interviewing women in the early 1990s about experiences of maternal depression, I was struck by the fact that many women did not see their babies as contributing to their feelings. Rather, it was the circumstances in which they found themselves as mothers—an ‘absent’ partner, impoverishment, loneliness—that was causing their distress. The baby was often seen as a source of joy in their lives. Creating the social and economic circumstances for more shared and supported early parenting might indeed make a profound difference to the mental health of mothers.

Sadly, though, greater recognition of maternal depression over the last thirty years in Australia has not led to much change in social and economic circumstances for mothers. Other countries, notably Sweden, have much more generous parental-leave policies than Australia, including rights to shorter working hours for parents of young children and incentives for fathers also to take leave (indeed these are requirements in some cases or else leave is foregone). Perhaps not unrelated to these policies, Swedish studies have revealed a generally lower prevalence of maternal depression than is found in Australia.

Rather than strengthening social-policy responses, what we have seen here is the introduction of a health surveillance, medicalised approach to women’s suffering. Almost no evaluation of whether screening for depression leads to better outcomes for women has been undertaken and depression prevalence for mothers does not appear to have shifted. We do know that every study that has asked women about their experiences of screening has revealed problems: women actually suffering say they often hide their real feelings when completing screening instruments through fear of being seen as bad mothers, or even of having their babies taken from them. In other studies, maternal and child health nurses admit to often screening only those they think might be affected. So many women in need of support are likely to be missed. Nor do we know much about what help is offered once depression is ‘detected’ (a GP referral? medication? counselling?) or whether women take it up. Screening was introduced without any effective systems in place for providing assistance, and nothing is known about whether screening has made any difference in the lives of the women identified as depressed.

It is important however to keep some perspective on the current condition of motherhood. Six in seven women do not experience depression as they embark on having children, so ‘motherhood as misery’ seems hardly to have caught on in the real world, despite social media appearing to tell a different story, as individual tales of the miseries of motherhood are constantly aired and shared. Perhaps raising awareness of mental-health issues has had unintended consequences.

The responses to maternal depression to date largely locate the life transformations that come with the birth of a baby squarely in the realm of the individual woman and not within the social relations actually at the core of the process of conceiving, birthing and raising children. This does a disservice not only to mothers experiencing depression but to all mothers. Despite evidence of the social underpinnings of maternal depression, there is little yet being done to change the context in which women so often mother alone. Integrating motherhood into adult life poses myriad balancing acts for most women, but the problems do not lie with motherhood or with women but rather with how societally unsupported motherhood so typically is. And the more that the difficulties of becoming a mother are medicalised, pathologised and individualised, and the joys and satisfactions and social value of motherhood ignored, the more I fear that women are being seduced into believing that the challenges facing them in becoming mothers are mental-health crises rather than life and social challenges requiring social and community responses.

As Camilla Nelson so aptly put it in ‘Happy Housewives and Angry Feminists: The Myths of Modern Motherhood’ back in 2015: ‘If society can solve its social problems, then maybe motherhood will cease to be a misery competition—mothers might not be happy in a utilitarian or hedonistic sense, but will lead rich and satisfying lives. And then maybe a stay-at-home dad can change a nappy without a choir of angels descending from heaven, singing “Hallelujah”’.