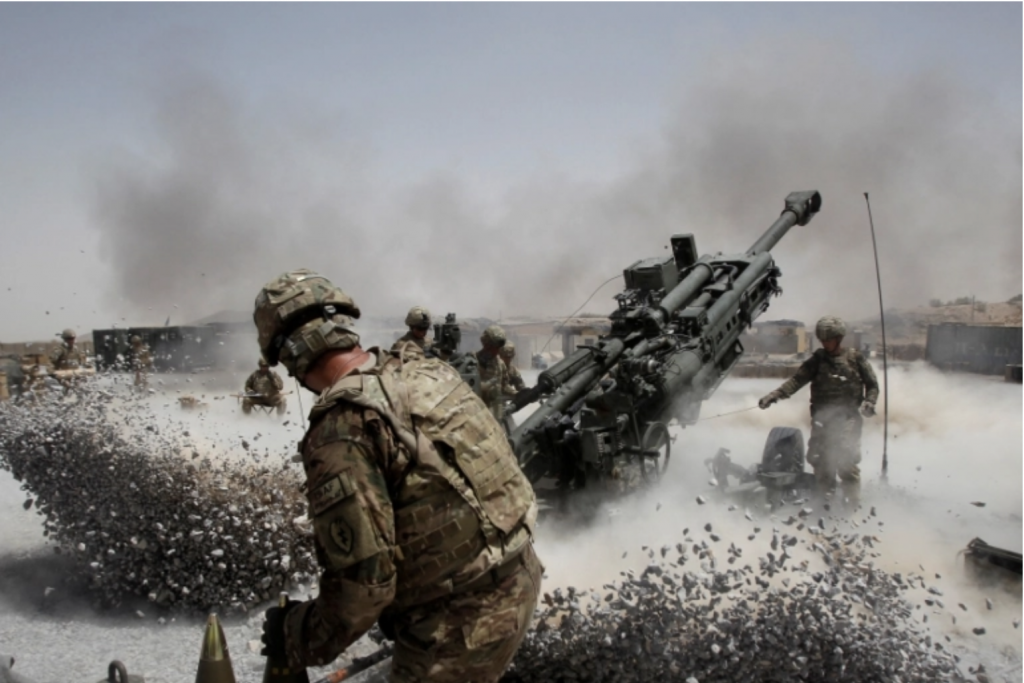 ‘The missiles rain down again in Iraq and Syria’—that could be a headline from any time in the last quarter century, but it’s on the home pages of the New York Times and the Washington Post this week. Apart from that, the operation barely garnered any notice. The strikes were launched in retaliation for attacks by Shi‘ite militias, backed by Iran (controlled by them, the United States alleges, which may be overreach), on remnant US facilities. There was no Trumpian Grand Guignol public agonising about total withdrawal or full invasion, just the same tap on the nose that the United States has been administering when required since its move to global extension in the 1890s, and especially since the establishment of its omnipresent empire—coextensive with the world itself, first one half from 1945, then all from 1991. The limited nature of the strikes and the lack of publicity surrounding them is as much a communication as the strikes themselves, saying: the Trump era is over. The United States’ enemies can no longer assume they are dealing with an erratic amateur who can be taken advantage of. Normal maintenance of a substantially extended empire has been resumed.

It’s in that spirit that Biden has forged ahead with withdrawal from Afghanistan, something he appears to have urged on President Obama, to no avail, eight years ago. The immediate result of this announcement and the first staged withdrawals has been the resurgence of what is labelled ‘the Taliban’ but may be multiple interlocking groups of local militias, larger ethnic networks and actual Islamists. To see it as the Biden administration taking up the anti-war cause would be wrong, of course. By the administration’s lights it is simply resuming rational, weighted foreign policy after four years’ interruption.

Afghanistan was the case of a lesson learned in Vietnam, and then forgotten again. How it got forgotten is emblematic of recent modernity. Over twenty years in Vietnam, as the Pentagon Papers make clear, the United States slowly began to understand that making war against a pre-modern society will only succeed if you are willing to absolutely annihilate it. Short of that, the enemy’s boundedness to place and collective society, grounded in shared beliefs, gives you an opponent whose collective capacity for sacrifice is almost endless. The United States had gone heavily into Vietnam based in part on the simplistic ‘take-off’ economic theories of Walt Rostow, arguing that societies could be relatively easily reshaped so that they would suddenly spring into full capitalism. That didn’t take off, and the anthropologists sent in by the United States to provide strategic information on the culture came back with more bad news (eventually): societies couldn’t be simply reorganised in pliant form as Germany and Japan had been after the Second World War.

The lesson held for a generation. What wiped it away in the late 1990s, perhaps, was the autonomous infinite extension of the United States via mass cultural dominance and the lack of a global other (China remaining behind its borders). The new technologies arising from Silicon Valley, the boom arising from Clinton’s centre-right economics, and the acceptance, at home, of permanent inequality as a given condition, requiring no great turn inward, gave outfits like the ‘Project for a New American Century’ a manic confidence even before 9/11 gave it a pretext for global adventure. Manic is the term exact: the power was largely projection—the failed adventure in Somalia was a Vietnam refresher course if ever there was one. Prudent, amoral realpolitik would have dictated post–9/11 heavy bombing of the Taliban and leaving the secular regime of Iraq alone. The ‘new century’ fantasy was that explored in Adam Curtis’s film Bitter Lake: perpetual control of key world oilfields, from the creation of Saudi Arabia in the 1920s on. But the very changes that made post-Vietnam wars possible—a global system of high-tech comms and command, exemplified above all by drones that can be piloted by shift workers from office blocks in Virginia—also made the fantasy impossible to realise. The colonised were no longer bound by borders. The Afghans were both a deeply rooted tribal people and funding themselves by tapping into the global opium trade. The Iraqis had become part of a de facto regional Shi‘ite federation, striving for its own nuclear capability. And so on.

If the United States is getting out of Vietnam II, it is not out of any leftward turn (and the domestically focused US Democratic Left has made no great protest about the recent Iraq-Syria ‘strikette’; the modest size of the attack, compared to Trump’s showy mass attacks early in his presidency, means it wwas probably designed to avoid leaving the party’s Left with no option but to protest). It is a reconsolidation for a reorientation towards the problem of China. Once again, Trump’s trade war with China was distraction rather than continuation, since United States–China relations exist at two distinct levels: one, as geographically bound nation states with extensive client-state networks; and two, as ‘Chimerica’, the economic entity in which China backs US debt, which supports US demand for Chinese products. The Obama administration’s aim was to politically encircle China with the TPP treaty, with mostly Asian nations creating an alternative common market to the Great Panda, while maintaining full trade relations. Trump cancelled the TPP, started a trade war and gained a small domestic production bump, but, ultimately, without a long-term plan, he left the United States in a worse place economically and politically. The Biden administration is not burdened with Trump’s advisers—such as Steve Bannon, convinced of inevitable, epochal race war—but it sees itself as having a lot of work to do in catching up to China’s imperial extension via its extensive loans to developing countries through the Belt and Road and other initiatives. Does it have a more clear-eyed view of a multi-polar world than the ‘new century’ boys and gals, now safely pickled in Washington think tanks? Or will Biden’s centrist liberal vision—of the United States as a historical force for good, with not much time for caveats—ensure a fresh round of overreach? Will it be expressed through a vision contrary to the ‘new American century’? That the United States, as the ‘last best hope’, is not an imperial power per se but a defensive one, holding the line for the survival of democracy on the planet? More can be licensed, in some ways, by a sense of threat than by extensiveness. It will be interesting to see how this plays out—not least in whether Western anti-imperialist Lefts can deal with the fact of two competing world imperialisms without perpetual recourse to cries of racism whenever China’s global extension is focused on. We may all become nostalgic for the moral certainties of the war in Iraq. Now, there was a war. Is. Now, there is a war…

The Australian commitment has been slavish, apelike, and automatic in both the deployment of troops and their withdrawal.