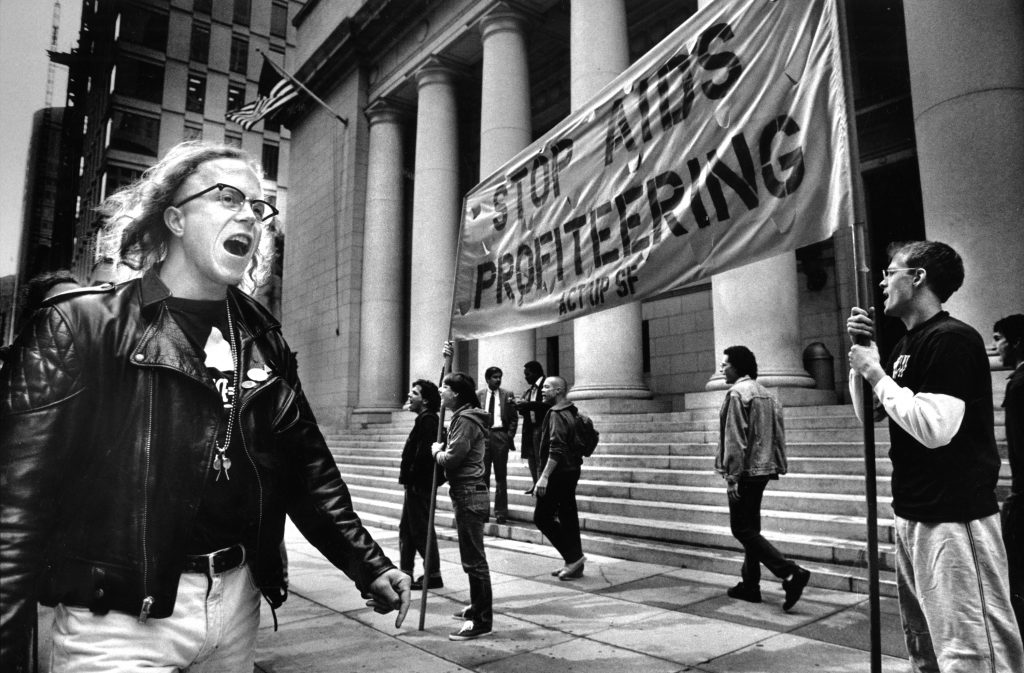 Members of ACT UP demonstrate in 1989 in front of the Pacific Stock Exchange in San Francisco against high prices and profiteering by pharmaceutical company Burroughs-Wellcome for its new AIDS drug AZT. Photo: Scott Sommerdorf / The Chronicle 1989

As we mark another World AIDS Day, a key question is, how long will the LGBTIQ community be held hostage by the pharmaceutical industry? And when will the AIDS organisations that represent us stand up to drug companies and demand a cure?

According to UNAIDS, around 38 million people were living with HIV in 2021, and 40 million had died of AIDS. Around 1.5 million people are newly infected each year, and close to one million still die of AIDS-related illnesses. In our region, the Asia-Pacific, HIV infections are rising. This is despite the widespread use of HIV drugs and pre-exposure prophylaxis (PrEP).

The pharmaceutical industry knows the LGBTIQ community is highly vulnerable to HIV/AIDS. Its agenda is clearly profit-driven. Drug companies make billions in profits from HIV drugs and PrEP each year. Their greed has no limit. The global HIV drugs market is set to grow from $30.46 billion to $45.58 billion in 2028.

The HIV sector is resigned to this, and has little interest in pushing researchers to fight for a cure. The AIDS activists of the 1980s have been replaced by bureaucrats in these organisations. The modern HIV sector is compromised by the millions of dollars it receives in government funding, and the perks and donations it gains from the pharmaceutical industry. Rather than fighting for a cure, the sector is pushing the agenda of the pharmaceutical industry. That’s lifelong medication for people with HIV, and PrEP for HIV negative people.

As someone living with HIV who has to take these drugs for the rest of my life, it’s sad to see HIV negative people embrace the same tedious routine of medication. The widespread medicating of the LGBTIQ community is not something to celebrate—it’s deeply troubling. After forty years of the AIDS epidemic and forty million deaths, our priority should be a cure.

The scientist Francoise Barré-Sinoussi, who helped discover the HIV virus, concurs. She says lifelong antiretroviral therapy is not sustainable, and is convinced that a functional cure is possible: ‘This would prevent people with HIV having to take cocktails of antiretroviral drugs for the rest of their lives, and it’s achievable’.

Despite her calls to action, a cure is rarely mentioned by the HIV sector or its colleagues in the pharmaceutical industry. The question is, why?

The modern HIV sector is highly corporatised. It is a huge employer in this country and abroad, and wields a great deal of power in the LGBTIQ community. The majority of people who work in the sector are not HIV positive, and have little interest in standing up to drug companies and fighting for a cure. Rather, their focus is money, jobs and the prosperity of their organisations. This industry mentality is what happens when health care becomes profit-driven. The HIV sector does not represent people with HIV adequately. It doesn’t understand the challenges we face, such as prejudice and discrimination, and higher rates of poverty and social disadvantage than the rest of the LGBTIQ community.

The HIV sector has become a launching-pad for many people to build their careers from. They are not concerned about the influence of the pharmaceutical industry. They welcome it. AIDS organisations pour money into LGBTIQ community groups to market their brands. The LGBTIQ media receives thousands of dollars in advertising revenue from AIDS organisations. It champions the widespread use of HIV drugs and PrEP in our community. Finding a cure is not part of the discussion. The HIV sector controls the narratives we read in the LGBTIQ media, and any debate on HIV/AIDS is silenced.

The voracious appetite for HIV/AIDS money in the LGBTIQ community is a huge problem. It maintains the power the pharmaceutical industry has in our community, and consigns us to popping pills for the rest of our lives.

We must stand up to them if we want a future without HIV/AIDS. I firmly believe we could find a cure if AIDS organisations and the pharmaceutical industry were serious about it. It’s the only way to stop the AIDS epidemic, and we can do it according to experts such as Francoise Barré-Sinoussi. It’s not fair for the LGBTIQ community to live with the constant threat of HIV while the pharmaceutical industry makes enormous profits. And it’s particularly unfair to those of us with the virus, who have to live with prejudice, discrimination and the health impacts of HIV for the rest of our lives.

James May has contributed to the LGBTIQ media and his writing has also appeared in The Guardian, The Age and the Sydney Morning Herald.

More articles by James May

I agree 100%. This is the point: we must fight for a functional cure and liberate the world from the fear. Hiv is like Hitler. No peace deal is possible.