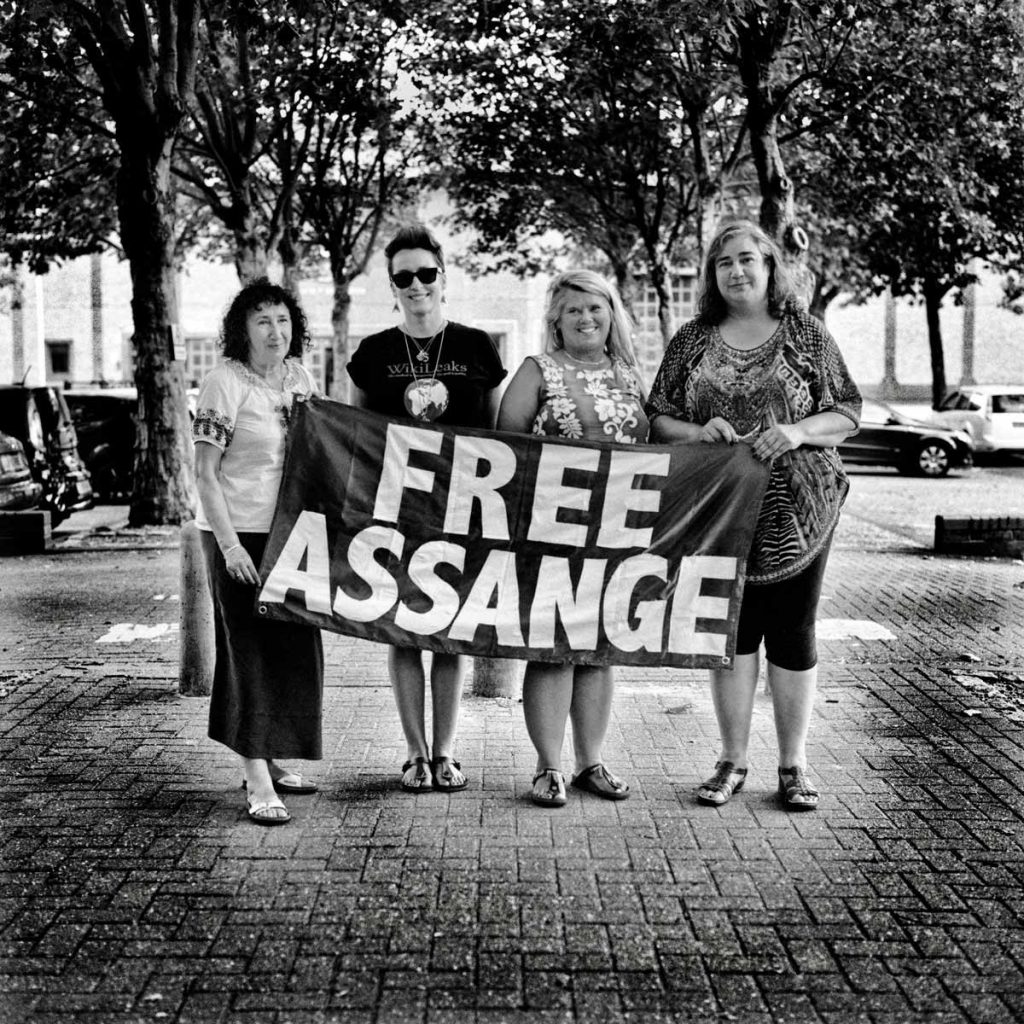 Friends and supporters of Julian Assange are tired, so very tired.  We are tired of working on this campaign and also of bearing witness to the great suffering inflicted on one man. While it is often an intensely personal attack on the character and life of Julian, more and more people understand that his case is also about the future of journalism and the public’s right to know.  While we are tired from winning that argument over and over again, if you look into the eyes of Julian’s close friends and supporters, some of whom agreed to be part of an exhibition of portraits by photographer Richard Lahuis, you will see a determination that is only growing.

The campaign for Donald Trump to pardon Julian before Trump’s fingers were taken from the button was obligatory, such are the urgent health and justice grounds for Julian’s immediate release. But of course Trump didn’t deliver. As Kevin Goszolda observes, ‘Trump constantly bashed the “deep state” during his campaigns and presidency, but when it came time to follow through and stand up to national security agencies by pardoning Assange and Snowden, he balked’. The Trump administration’s indictments against Julian may have been issued by the Department of Justice, but they were drafted by a host of vengeful institutions that endure and outlive mere presidents and administrations that come and go. For them this sadistic litigation is therapeutic. All we can thank Trump for is the growing groundswell of public disgust at what is happening to Julian Assange at his hand, the penny finally dropping for many that this man has suffered enough.

Julian’s name does not belong with this obscene list of people anyway, although if there were any prizes for political acumen, Trump sure rewarded the wrong guy with his last-minute decision to fully pardon the CEO of his 2016 presidential campaign and chief strategist.  It’s actually because of his political acumen that Julian is still caged and silenced. He has the ability to combine journalism and technology to reveal the truth not only about incidents and newsworthy scandals but, crucially, about whole institutions and significant events such as wars. That is his most dangerous success and achievement.

Before he was placed in a COVID-infested dungeon, Julian explained WikiLeaks’ strength as an archive, emphasising that it is the archive that has the scale to deal with the problem:

One of the fundamental missed lessons of the WikiLeaks experience is about how to deal with scale. One way of dealing with scale is to stitch together a big international collaboration, get more bodies more eyeballs on the material. The other way to deal with scale is to understand that scale is inherent in the material. When you have millions of documents, you need to make millions of documents available and citable, so that not just a few hundred journalists but all the lawyers in the world, all the police in the world, are looking at them.

This is the idea that scares the shit out of powerful people and institutions and why Julian is still in a cage. It’s also thanks to District Judge Vanessa Baraitser.

By the time Baraitser arrived at the Old Bailey on Monday 4 January, she’d had a shit Christmas and a shitter New Year writing a shit judgment after almost a year considering the fate of Julian Assange. She had been presented with bundles of arguments, and evidence testimony from forty-two prominent and credible witnesses, and she can’t have been unaffected by extensive media coverage and public commentary from peers, such as that from the International Bar Association.

Baraitser was guilty of descending throughout the trial and in her judgment. This is a technical term in legal process that Lord Denning warned against at length. A judge ‘descends into the arena’ when they are too talkative and interventionist, and also through process that persistently disadvantages one party, or demonstrates contemptuous attitudes for some arguments and people while receiving others favourably and cheerfully. The extradition hearing was an atrocity exhibition demonstrating Denning’s point that judges don’t just look at how the scales tilt but can actively tilt the table on which the scales sit—for example, by allowing the prosecution to repeatedly submit documents and entire new indictments mid-trial, shutting down witnesses, and ruling that Julian had to sit in a glass box where he could not instruct his lawyers, just to name a few (see Part I and Part II of this series).

While she delivered her hideous judgment with an excellent last line ordering the discharge of Julian, I had my head in my hands, saying to Scott Ludlam, ‘It’s as bad as it could possibly be’, because her judgment echoed, restated and often refined the arguments of the prosecution supporting extradition and the criminalisation of journalism, giving short shrift or generous misinterpretation to those of the defence. Of course there has to be an appeal, I thought as the judgment came down, principally because of dangerous precedents such as this proffered by the judge on journalism in the digital age: ‘The conduct in this case occurred in the US because the publication of the materials caused harm to the interests of the US’.

But at the very end came the twist, with a great one-liner: extradition was denied under section 91 of the UK Extradition Act of 2003, due to Julian’s mental health and the oppressive nature of the US prison system, which would induce his suicide. It is important to recognise that the judge indicated that the mere order of extradition would be enough to cause his suicide, because of his already fragile mental state, which is a direct result of this decade-long manhunt.

While it’s deeply alarming that the judge had accepted the majority of the prosecution’s case, extradition was rejected on the narrowest of grounds. Extradition would be denied because Julian was weak, not because he was right. We should have been happier, given we have worked and waited for Julian’s freedom for ten years, but having worked on this campaign for ten years, we couldn’t quite believe it was over. And it’s not.

Two days later Baraister ruled that Julian is to remain caged in Belmarsh Prison during the appeal phase. Given that her ruling has made the United Kingdom the only safe jurisdiction from which Julian cannot be extradited, it is absurd that this Australian publisher and journalist in such poor health must remain in a supermax prison through which COVID-19 is raging. In 2012 it was the spectre of extradition that drove him to seek asylum, the principal reason he is accused of evading bail. With that threat removed, he has no motivation to ‘evade justice’, as the judge so curtly spat.

Justice itself has evaded this process. Even if he wins the appeal the charges are still there and he will not be safe anywhere, including his home country. But it isn’t about justice; it’s about delay. Scott Ludlam put it like this in A Secret Australia:

In this mockery of due process, endless delay is the point: our friend is already serving jail time for charges under US espionage law that may never even be heard in an open court. The people who put him here couldn’t care less if the extradition hearings are delayed by a year and then take another five years to work through appeals courts, because every day this sadistic process drags out is another day Julian spends without sunlight, friends, family and freedom. And that’s the whole point.

Kafka on Acid: The Trial of Julian Assange

PART I: After waiting handcuffed in the holding cells, he is placed in a glass box at the back of the courtroom. Then he is forced back into the Serco van to be strip-searched back at Belmarsh to face another night alone in his cell.

Kafka on Steroids: Summarising the Extradition Hearing of Julian Assange

PART II: Embarrassing the powerful is the harm for which the publisher is on trial, while those who have committed the crimes revealed are free to strike again, to profit again and to continue killing in cold blood.

This article is very helpful and grateful. Thank you for sharing awesome article.