Justice Beyond Recognition: What Djab Wurrung Trees Tell Us 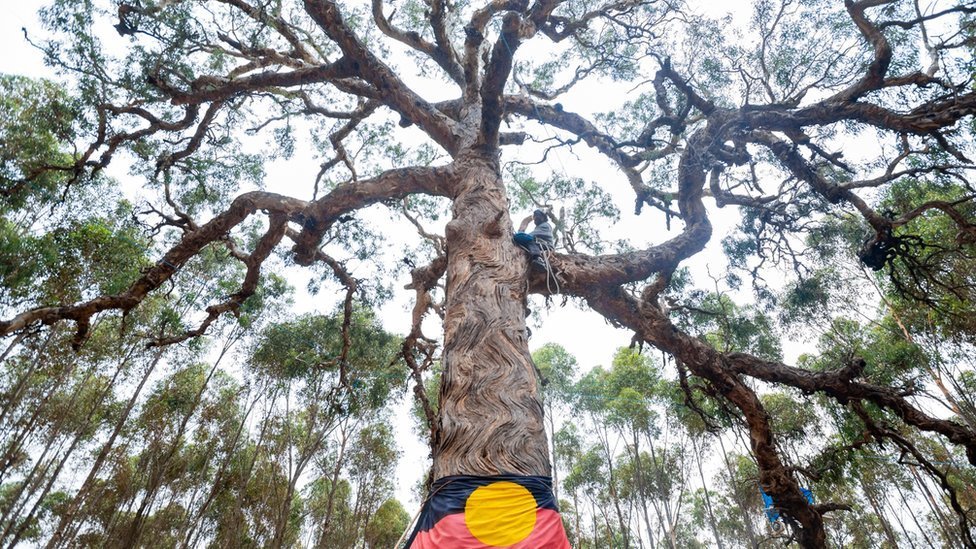 On 26 October 2020, the Victorian state government chopped down the culturally significant Directions Tree as a part of the controversial Western Highway upgrade. The magnificent yellow box tree, situated in Western Victoria, held immense cultural and spiritual significance for Djab Wurrung people and was estimated to have been 350 years old. The destruction of the tree coincided with the easing of lockdown restrictions in the state capital, Melbourne. While a part of Victoria rejoiced in its renewed freedom, the actions of the state government appeared ill-conceived, as they inflicted great sorrow on a community that had steadfastly protested the desecration and destruction of the sacred trees for over two and a half years. In a year that also saw the shocking destruction of Juukan Gorge by Rio Tinto, the state government’s actions appeared wilfully callous.

The issue of Aboriginal heritage in this case is more contentious than it may at first  appear. The Djab Wurrung Heritage Embassy was established in 2018 to fight for the protection of the heritage area, more specifically the culturally significant ‘birthing trees’, that came under threat from the ambitious Western Highway project that aimed to connect Melbourne and Adelaide. The $672 million highway project hoped to duplicate a 12.5-kilometre stretch of the road and required the removal of about 3000 trees. The state government had defended the project, arguing that the initiative would reduce travel time and improve safety along that stretch of road.

The project has been fraught with disagreement since its inception, especially concerning the extent of cultural-heritage protection. The long and convoluted history of approvals for the project began with a primary signing off on the site from Martang, the Aboriginal party then registered to have the legal authority to speak for the traditional owners. Subsequently, the Eastern Maar Aboriginal Corporation (EMAC) and the Djab Wurrung Heritage Embassy negotiated to save sixteen more cultural trees. EMAC was given the legal authority as a registered party to speak for the traditional owners in 2020.

Meanwhile, the Djab Wurrung Heritage Embassy applied for Commonwealth protection of the trees affected by the highway project under the Aboriginal and Torres Strait Islander Heritage Protection Act 1984 (Cth; ATSIHP). Eventually, the Commonwealth government rejected the application. The only success the Djab Wurrung Heritage Embassy enjoyed was when the Federal Court set aside the minister’s decision not to make a declaration under sections10 and 12 of the ATSIHP, protecting the birthing trees based on legal error in the ministerial assessment. The court had demanded that the minister reconsider her decision in light of the wider interpretation of the ATSIHP, considering evidence that related not just to individual trees but  to the heritage area as a whole. However, the minister refused the protection in the second instance and approved the project. The tortuous history of the negotiation culminated in the destruction of the Directions Tree this year, as the registered Aboriginal party did not find this particular tree to have any cultural significance.

The fundamental questions raised during the protracted trajectory of Djab Wurrung resistance to the destruction of the sacred tree rest on who has the right to speak for the community. Hard on the heels of this development will be the question of why Aboriginal communities should be cornered into homogeneity and consensus in articulating their concerns, an undue burden not shared elsewhere in the settler nation. A substantial number of Djab Wurrung people had considered the tree to be culturally significant. They did not see the registered Aboriginal party as representing their views. Consequently, the community has endured immense grief resulting from the severance of cultural and spiritual ties that were etched and embodied in the tree. While defending the actions of the government, Victorian premier Daniel Andrews dismissed the objections to the destruction of the tree on the grounds that the state had undertaken a ‘consultation process’ and the traditional owners had approved of the decision. By constructing the registered Aboriginal party as a single authoritative voice to speak for the traditional owners, the alleged ‘due process’ through consultation erased the multiplicity of voices that make up Indigenous ways of life. It also left a void in a more fundamental question: where was the ‘free, prior and informed consent’? Although ‘free, prior and informed consent’ has been a well-established principle under the United Nations Declaration on the Rights of Indigenous Peoples, it is yet to find its feet among the domestic legislations in Australia.

A wealth of scholarship, including that of Glen Coulthard and Audra Simpson, provides a critique of flawed notions of legal recognition within settler-colonial legality and liberal constitutions. The politics of recognition and reconciliation lean on limiting the question of Indigenous rights to cultural differences, thereby eliding the questions of Indigenous sovereignty and self-determination. The rights framework in settler-colonial nations, especially in Australia, has been designed to allow the flourishing of ongoing settler colonialism at the expense of the flourishing of indigeneity. Tellingly, as Australia continues to grapple with the question of a constitutional voice for the First Nations, the heritage laws appear to be designed to mitigate the possibility of litigation rather than to protect Aboriginal heritage or provide a genuine avenue for First Nations peoples to contest their grievances. The existing consultation structures and facilitating laws do not take into account the asymmetric power relations between the First Nations and settler-colonial legal formations. This added displacement of Aboriginal people from the power to make democratic choices is at the heart of what Senator Lidia Thorpe has called ‘manufactured consent’.

Djab Wurrung sacred tree destruction mirrors the recent case of Gomeroi people fighting to protect their heritage in New South Wales. Dolly Talbott, a Gomeroi woman and a member of the Gomeroi Traditional Custodians group (GTC), sought judicial review of decisions made by the Minister for the Environment that constituted a refusal to make a declaration under section 10 of theATSIHP. The heritage areas over which declarations were sought were close to the site of the proposed Shenhua coal mine, newly approved by the minister. Among other things, when refusing to make the declaration the minister had considered that the social and economic benefits that would flow from the mine to the local community outweighed Aboriginal heritage concerns. Similar arguments of social and economic benefits have been made in the case of the Western Highway upgrade. There is a pattern of pointing to benefits elsewhere as a good reason for allowing the destruction of heritage and the denial of Indigenous rights, not only Australia but in other jurisdictions as well. By making a cost-benefit analysis of developmental or extractive issues, the state has created a nebulous territory of citizenship divided along the lines of capital and race. In this territory, First Nations must either exist or vanish; neither option allows for a just environment in which they may thrive as ‘citizens’.

The imposed structures of governance that do not enable self-determination, the land rights that do not address the longue durée of dispossession and erasure, and an absence of reconciliation processes to interrogate the accumulated pain of First Nations over the years have come together in the Djab Wurrung episode. Systematic overwriting of one form of injustice with another reiterates the claim that settler law is not on the side of the First Nations. The innate unfairness in the system begets greater injustice by weighing economic interests against Indigenous rights that are incommensurable. While the Juukan Gorge destruction differs from the destruction of the Directions Tree in many ways, both instances raise the question: will justice ever be on the side of First Nations? The moment has arrived where we feel compelled to answer this question. Such an answer must come from a substantive reform of existing legal structures, including making provisions for a robust First Nations constitutional voice. Australia knows where to look in that case.

For Djab Wurrung trees and country

In nearly all cases where states require associations of traditional connection to be publicly performed in order to be recognised, the persons called upon and authorised to perform them have had their associations fractured by colonial dispossession.

Sakshi Aravind is a PhD student in the Department of Land Economy at the University of Cambridge. Her thesis focuses on Indigenous environmental litigation in Australia, Brazil and Canada and the legal framing of environmental justice in courts. Her research areas include legal and Indigenous geographies, legal anthropology, comparative environmental law, constitutional law and political ecology.