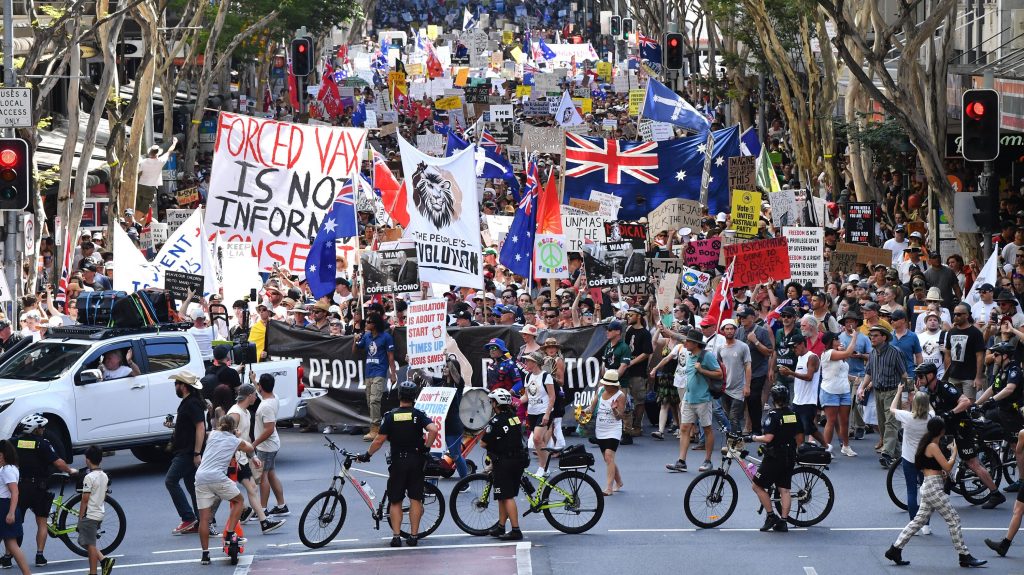 Even as it grows more menacing in point of imagery and political polemic, the Australian iteration of the anti-lockdown/anti-vaccination movement (if indeed it is a movement) still has the air of cosplay about it. As the prevalence of pro-Trump merchandise suggests, the particular idea of ‘freedom’ being channelled on the streets of Melbourne, Sydney and elsewhere is in many ways a cheap foreign import, with little local saleability beyond a few libertarian enclaves. Certainly the ragbag of conspiracy thinkers, anti-vaxxers and far-right elements that make up these so-called freedom rallies don’t seem to be particularly well informed about Australia’s political traditions. One guy in Mount Gambier appeared with a sign declaring mandatory vaccinations to be an attack on Australians’ 14th Amendment rights. Opinion is divided on whether he was able to find his way home unaccompanied.

It is as much the niche quality of the ‘freedom rallies’ as their openly threatening character that has encouraged Labor to go in hard against the protesters and to characterise Scott Morrison’s more equivocal response as a Trumpian ‘stand down, stand by’ moment. That’s an exaggeration, of course, but by linking Morrison’s small-government pitch to an untidy and resentful mob Labor thinks it can attract more voters than it alienates, and no doubt the relative exoticism of ‘negative liberty’ arguments—arguments that stress one’s freedom from state power, as opposed to such freedoms as the state may secure in the form of (say) health or education—has its part to play in that calculation. Equipped with ersatz gallows and nooses, the protestors accuse the politicians of treason; but with no Jeffersonian documents to draw upon, the precise content of this treason remains obscure.

More interesting in many ways, and quite possibly more important in the long term, are the attitudes evinced by progressive Australians throughout the COVID-19 crisis. For while it is clear that Australians in general are more persuaded by ‘positive liberty’ arguments than the new libertarians would like to imagine, it is striking that the case for lockdown, or indeed for mandatory vaccinations, is only rarely made in those terms. Instead what we find are arguments from ‘the science’ and a reflexive regard for ‘expertise’ that tells us something deeply significant about the class basis of contemporary progressivism. The lack of an alternative account of freedom in the face of the new libertarianism does not derive from political illiteracy; it derives instead from a political world-picture formed through educational meritocracy, abstract knowledge and systems thinking.

The roots of this world-picture are tangled, but it was the transition away from heavy industry and towards the so-called knowledge economy that catalysed its emergence in the 1980s and 1990s. As centre-left parties inherited the project of neoliberalisation from their right-wing counterparts, accepting as broadly inevitable the processes of deregulation, privatisation, offshoring and financialisation, they rechannelled their social justice policies away from the welfare state and unions and into education and training, which became not just the means through which the new economy would be built but also the social mechanism through which greater equality could apparently be achieved. Thus, as the knowledge class grew in size, and knowledge work grew ever more abstract as a result of new technologies, knowledge workers themselves became increasingly remote from the lives and demands of the ‘old’ working class still toiling away in the ‘material’ (or ‘real’) economy. Both self-esteem and esteem in general came to focus on intelligence and credentialed opinion.

Of course, it is entirely appropriate to defer to expertise in a pandemic, at least as matters medical go, and figures such as Dr Norman Swan have done a good job of keeping the public informed, and of keeping governments honest. But the feeling that we are also beginning to witness a form of ‘class pleasure’ in the reflexive invocation of ‘the science’ is increasingly hard to avoid. Paradoxically, we may even be seeing the emergence of a form of technocratic populism, as the ‘I stand with Dan’ hashtag trends on Twitter and Western Australia’s premier Mark McGowan is immortalised in tattoos. Certainly such a populism has a readymade ‘other’ in the figure of the (COV)idiot—i.e. the person whose political viewpoint can be reduced to credulity and/or unintelligence. The election of Trump in 2016 was the occasion for countless pieces on this theme, and the idea that there is a direct relationship between populism in its right-wing form and low education/cognitive ability is now a feature of much progressive chitchat. The recent protests were no exception, with progressive Twitter fairly abuzz with numerous (and often funny) examples of the protestors’ irredeemable stupidity.

Irredeemably stupid they may be, too, but a key challenge for the Left, or for what remains of it, is to consider how technocratic progressivism, as the ideology of an emerging ruling class, is likely to play out in the future, as it squares off against, and so draws strength from, the ugly populism of Trump and his analogues. As Guy Rundle noted in his piece last week, the phenomenon of ‘green prometheanism’ is now in the political ascendant, and if progressives’ deeply incurious approach to issues such as euthanasia or gender-reassignment surgery is anything to go by (and I think it is), the prospect that the climate crisis will become just another technical obstacle on the way to species transformation, as opposed to an occasion to reflect on our being and on our deep relationship with nature, will quickly become a reality. As we move deeper into the techno-scientific era, one would want to see a radical humanism that can not only articulate an idea of positive liberty but also think about the human flourishing such freedom is supposed to underwrite. What are we? What are our natural limits? These are not questions that Dr Norman Swan, any more than the Mount Gambier Minuteman, can answer.

Now begins a new process, and for many from a ‘red–green’ nexus informed by past struggles and ides, it is a bittersweet moment.