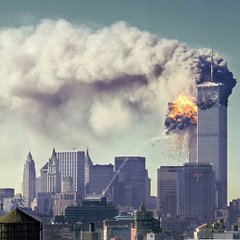 This is going to be our Pearl Harbor moment, our 9/11 moment, only it’s not going to be localised. It’s going to be happening all over the country. And I want America to understand that.

The idea that the current catastrophe, which could cost hundreds of thousands of American lives in the coming weeks, is analogous to two historical events that were catastrophic because no one saw them coming is oxymoronic in the extreme. But it’s just the logical extension of Donald Trump’s framing of the pandemic as a ‘war with an invisible enemy’. Unfortunately, Trump and administrations stretching back to the 1970s have neglected and systematically undermined their frontline defence in this fight—the community.

At the press briefing on 31 March, the day when the coronavirus task force stood in front of charts that announced that between 100,000 and 240,000 fatalities was their new ‘goal’, White House coronavirus-response coordinator Dr Deborah Birx made clear what was required to keep the projected deaths on the low side. Mitigation, she said, ‘is done community by community. We all know people are in their states and in their communities. And we’re very dependent on each person in the United States doing the same thing, following the presidential guidelines to a T’.

The community’s ability and willingness to adhere to these social-distancing measures will be the most significant factor in determining the death toll, yet Dr Birx’s pleas rang hollow and aspirational, at best. The communities she was appealing to barely exist any more. She was speaking a language that’s counter to the market-orientated ethos that has underpinned every facet of American life since the Second World War. ‘Never was the word “community”’, Eric Hobsbawm perceptively noted, ‘used more indiscriminately and emptily than in the decades when communities in the sociological sense became hard to find in real life’.

On the other hand, Trump’s insistence that a martial response is required reflects an inability to think about collective action outside the realm of war and the nation state. It’s all the more absurd because what the crisis demands is an unprecedented demobilisation—the polar opposite of a wartime mobilisation effort.

In the same press briefing, Trump offered a clichéd rallying cry that fits comfortably within a long American tradition:

I know our citizens will rise to the occasion and they already have sacrificed a lot… Just as Americans have always done, they will do a job like few have seen before and they’re proud to do it. And I see that there’s a great pride going on right now.

Even if he wanted to appeal to communities, Trump doesn’t possess the language or experience to do so. He’s spent his entire rent-seeking life undermining communities in pursuit of individual wealth. Even while New York, the city he grew up in, struggled to cope with the pandemic, he was more interested in trading insults with the state governor and exerting his authority. Indeed, stars-and-stripes nationalism—a common feature of everyday American life—sounds insincere and forced when Trump attempts it. When asked why he underplayed the threat posed by the coronavirus, his response was odd in both form and substance: ‘I am a cheerleader for the country’, he said.

Trump has never really bought into the myths that mainstream American nationalism is built upon—his America is white and insular and exists so that he and his buddies can get rich. This is a particular kind of nationalism that he was able to harness to win an election; however, it has proven enormously destructive during his term in office, and it has only been exacerbated by the crisis. But perhaps more significantly, the administration’s mishandling of the response represents a fracturing of the body politic that is too often uncritically labelled and dismissed as ‘populism’.

In Imagined Communities, Benedict Anderson set out to resolve what he saw as ‘the central problem posed by nationalism: what makes the shrunken imaginings of recent history (scarcely more than two centuries) generate such colossal sacrifices?’ While Anderson was reflecting on the terrible violence of the world wars, Trump’s ‘war’ is obviously not a real one and the nationalism he invokes to fight it is not his. Yet Trump’s performance is illustrative of just how quickly the global order has changed and is changing.

‘The centuries-long romance of nation with state’, predicted Zygmunt Bauman, ‘is drawing to an end’:

In a state that is no longer the secure bridge leading beyond the confinement of individual morality, a call to sacrifice individual well-being, let alone individual life, for the preservation or the underlying glory of the state sounds vacuous and increasingly bizarre, if not amusing.

In this respect, the coronavirus pandemic is a perfect storm in which the failure of the state (most obviously in the inadequacy of the healthcare system) is only dwarfed by the failure of the nation to provide any kind of unified, collective response. And the vacuousness of the sacrifice is laid bare when it can’t be tied to some apocryphal greater good. All that’s left to fill this void is Trump—cheerleading.

Tim Robertson is an independent journalist and writer. He tweets (occasionally) @timrobertson12