I-Me-My-Mine: The Expansion of Mental Health and Individualisation 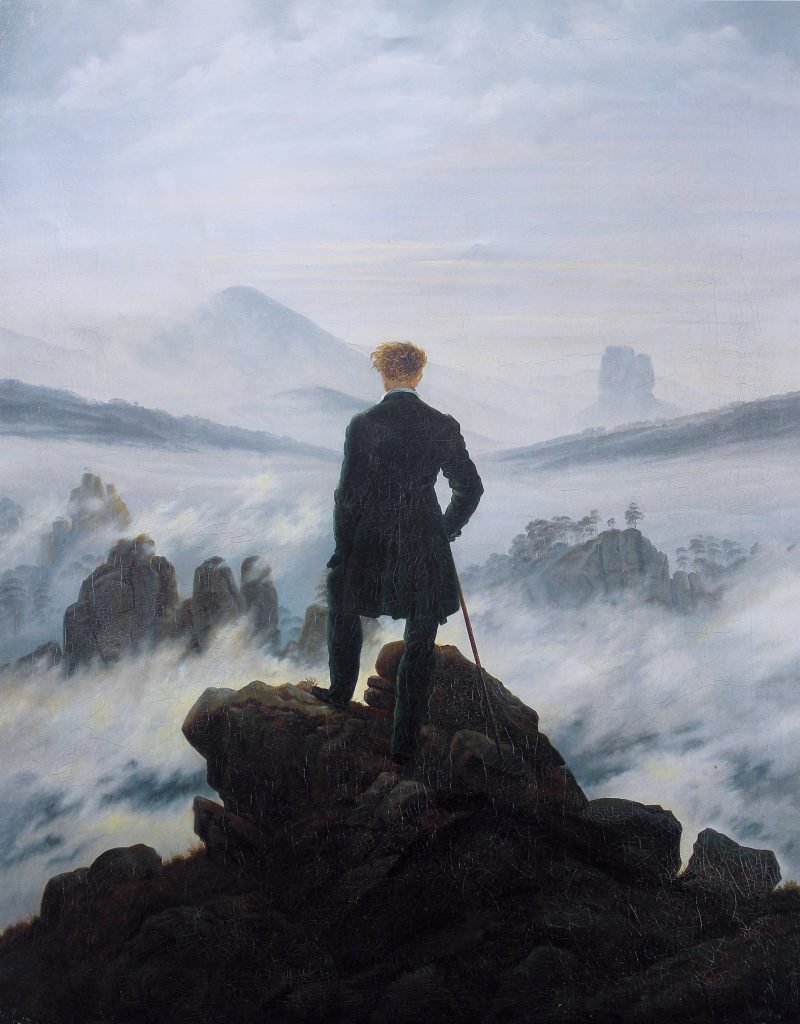 'Wanderer above the Sea of Fog', Caspar David Friedrich, c.1818.

According to a recent study the average score for ‘negative emotions’—depression, anxiety and stress (DASS)—during the pandemic was ‘three times greater than existing population norms in those with no pre-existing mental health conditions’ (and) ‘5 to 5.5 times greater than population norms (for) those with a pre-existing mental health condition’.[1]

The experts agree. The pandemic has had a disastrous effect on inner life. Because Covid is a transient phenomenon, these findings become less ominous. More or less, they represent a bump, an outlier result, that reflects an understandable response to a singular event. If so, presumably interiority will right itself.

To get a better sense of how inner life is faring over time, what is really needed is a reliable baseline. Fortunately, this has been supplied for us.

Sarah Krasnostein bundled-up the accepted epidemiological literature in a recent Quarterly Essay,  ‘Not waving, drowning: Mental illness and vulnerability in Australia’. In this account, Krasnostein reported that ‘almost half of all Australians will experience mental ill-health during their lives, and almost one in five will meet the criteria in a given year’. Along with these statistics, the reader was told that ‘the mental-health system is failing, even before the pandemic.’ The summary: many who suffer from mental illness ‘are left to exist on the margins; many feel unbearably alone and defeated.’

There is a terrible truth in these words. There is also an unhelpful conflation. Historically, and continuingly, people with a serious mental illness, especially if their condition is accompanied by poverty and/or other difficulties, have been shamefully caste out. It is unhelpful to identify this smaller group with the situation of a much larger, but less troubled, group who are worrying about ‘my mental health’, and/or who see a private therapist, whilst continuing with their routines relating to employment and recreation.

This is way too crude. A binary between the worried well and the seriously ill leaves out a key factor. Each of us, every one of us, has been subject to the process of individualization. As Zygmunt Bauman (amongst others) has argued, a download-to-the-lowest-level-entity program has trained, each individual to be self-centred—to put one’s own feelings and interests at the front of the queue.

This pre-occupation with my hurts, my dreams, my entitlements—with the organizing principle that I am, and should be treated as, special—is the garden bed into which the du jour varietal ‘have regard for your mental health’ has been planted. Yes, it makes real sense to de-stigmatize mental illness. Yes, health-education campaigns do the public a service in raising awareness that you or I might become ill. What is not logical is to conflate the everyday experience of worry or sorrow, distress or confusion, struggle and despair, with ‘having a mental-health problem’ or, even worse, with mental illness itself.

A strong argument can be made that industry figures are complicit in, if not are actively driving, this pathologizing. For example, a high profile psychologist informed his Radio National audience that ‘We all have them (traumatic memories) tucked away in the lower part of our brain, in the cerebellum’. On receiving this expert’s message, it makes sense that you and I, reviewing our pasts, ask, Hey, I have had many hard times. Maybe, I suffer from trauma. That would explain a lot.

That non-professionals have come to naturalize the word ‘trauma’ is no surprise; it is on-repeat in modern autobiographies, in fiction, in a heap of online serials, and in many news reports. The term has also come to be easily employed in everyday speech. That experts have also engaged in ‘concept creep’ with respect to trauma requires more complex attention.[2] Political economy is definitely one dimension in this consideration, but less material concerns—having good intentions for example—are also ingredients. Very likely, relevant specialists have been allowed an unconstrained tilt at psychologizing. Give a small boy a hammer and he will decide that everything he encounters needs pounding.

Theorising to one side, the mainstreaming of trauma is not a singular event. Just as the ambit of this construct has broadened, so too has anxiety and depression been re-framed. Rather than being encouraged to use an everyday vocabulary—I feel toey; I am struggling; I am sad—as first-choice descriptions of the inner travails that, at least from time to time, are bound to trouble each person, the consumer is being instructed to zero-in and to ask themselves ‘have I a mental health issue?; ‘am I experiencing psychological distress?’ The zeitgeist now tells you, ‘if you are not feeling positive there is something wrong with you.’ Described in the specialist literature as the high-prevalence conditions, anxiety and depression—two of the three ‘negative emotions’ mentioned earlier—are now recommended as knowing (‘insightful’) co-ordinates on the official map.

If these big names don’t fit, try obsessive-compulsive or borderline as your disorder. Still no good? Maybe you are on the on-the-spectrum or bi-polar, are body dysmorphic or a substance abuser? Susan Greenfield reckons ICT is re-wiring us, so it is no wonder attention deficit hyperactivity disorder (ADHD) is the new bolter. It affects at least 10 per cent of the population—including, maybe, you. Still feeling left out? Try one of our combinations. Trauma, with a side of depression and anxiety, is very popular.

Colloquial, faux-technical and formally diagnostic terms have become conflated. This taxonomic marsala is itself a problem, but it is only the tip of an iceberg. For example, the term ‘mental health’ has drifted from its traditional realm in specialist usage into a welter of applications within which disparate, even contradictory, meanings are demonstrated.

The term mental health can be used as a euphemism for serious mental illness; this counter-articulate usage is seen in statements such as ‘many who are homeless have a mental health issue’. At the other end of the continuum, if one wants to be polite, or if one genuinely wants to know about another person’s mood, it is now not unusual to ask after one’s mental health. The referent in this latter case acts within a qualitatively different register to the one that is in play in the former. The above two meanings are only part of the collage as several distinctly different registers (mindset; disposition; wellbeing; quality of life) can also be denoted by the term ‘mental health.’ These registers sit between ‘current mood’ and ‘serious mental illness.’

The linguistic mess around the term mental health is not an island. There are obfuscations, too. Think of the sports star who says, ‘I need to take time out to look after my emotional and psychological wellbeing’. That feelings are part of the psyche is indisputable, but we have almost naturalized a dividing practice that perverts this indivisibility to such an extent that the champion’s statement cues neither incomprehension nor derision. Somehow, it seems that the term ‘psychological’ is to be equated with ‘the mental’—with the realm of attitudes as the supposedly key arena. Regrettably, such a formulation orphans psychology from its genealogy and its identification with the psyche, the soul, the spirit, the inner breath.

Very likely, a significant driver in the greater reporting of mental-health problems is a language use that double dips, that conflates, that makes ‘mental health’ a kind of strange magic pudding. Not least of the factors feeding into this redundancy is that a pre-occupation with mental health side tracks, if not demolishes, a concern for the ethical.  Rather than being oriented towards being good, worthy, moral, loyal or faithful, it is becoming a convention that one should organize one’s life to be, and to stay, healthy. Exercise, diet, meditation, ‘positivity’, having the right friends, and so forth, these are said to be the ingredients that lead to being vital and forward looking. It seems self-care is the new religion.

Freed from traditional concerns, an intense and persistent engagement with the I-me-my-mine is like a dog chasing its tail. One descends ‘down the spiral staircase of the self’ to re-cycle Montaigne’s famous epithet. Such a trajectory is precarious and unsustainable. De-natured, the social self loses its place in so much as the process of individualization has its way. Disoriented, it is close to impossible to distinguish different registers of hardship, different orders of discomfort and distress, if it all about me.

At the end of a first session it is hard to imagine a well-meaning private psychotherapist not saying to a potential client ‘come back. Working of your issues is likely to do you good’ whilst the contrary statement – ‘Your troubles do not warrant the cost and inconvenience of treatment’ – will rarely be heard. As discussed earlier, this is unfortunate in so much as problems of living are an inevitable part of life. We all experience hardships and adverse life events. Each of us has downs, imperfections and recurring concerns. Where once this was accepted as ‘how it is’, the rising prominence of the I-me-my-mine allows worry to be the reformulated as opportunities for, even the demand that, citizens properly care for their mental health. This reformulation is stimulating an expanding market.

[1]  … “demonstrated negative emotions 5 to 5.5 times greater than population norms. (When this) data was compared with Chinese data, two differences emerged. First, the mean total DASS score from China …  was lower than that of Australia, even for individuals not reporting a mental health condition … Second, more Australians were classified as having moderate-to-extremely severe negative emotions”. Rossell, S.L., Neill, E., Phillipou, A., Tan, E.J., Toh, W.L., Van Rheenen, T.E. and Meyer, D., 2021. An overview of current mental health in the general population of Australia during the COVID-19 pandemic: Results from the COLLATE project. Psychiatry research, 296, p.113660.

Woebot may sit at the outer rim of digital mental health technologies, but we can see the shape and trajectory it implies for understanding mental health, the care relation and, beyond that, the person generally. Where the CBT-AI combination sets up a relentlessly positive artificial other—an interlocutor that is never awkward or demanding, and becomes naturalised as ‘what I like’—real-world relationships are bound to be found unsatisfactory.