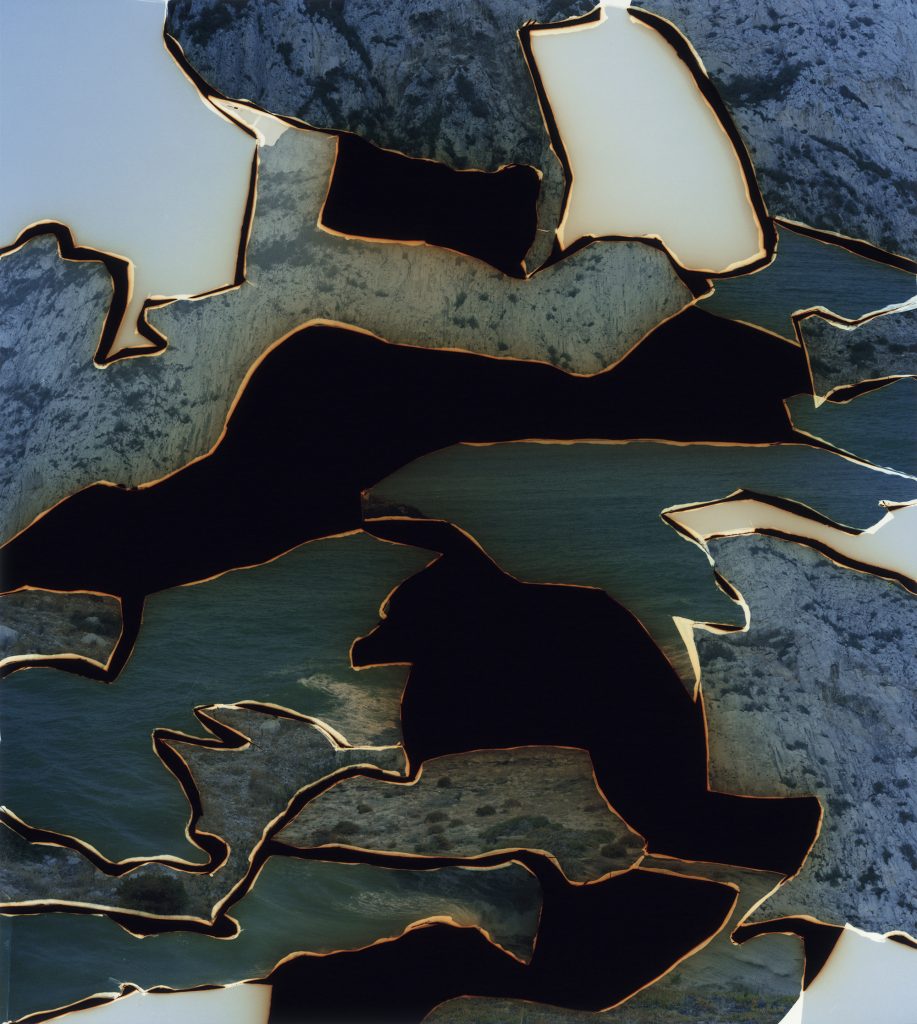 Our abstract ways of viewing

As if soaring, we see a vision of the Earth beneath us. Ridges and mountains rise before us and we move past them. A river delta is spread below us. Fields are cut into geometric shapes, until the curved and irregular lines of the landscape are replaced by straight lines. City streets sprawl out in a grid pattern, or curve into cul-de-sacs. Colours become familiar: the green of plants, the blue of the ocean and bodies of water, the grey of concrete. We zoom in to a particular place, or scroll past, moving freely across apparently vast terrain. We zoom out more, and more, and more, to see the city, the mountain range, the continent bounded by blue water, before finally seeing the entire circle of the globe hovering before us.

Digital satellite imagery makes it possible to experience the Earth in this way—not actually soaring across the surface, but viewing a virtual, mediated globe.

The first time a photograph of the entire Earth was taken from space was in 1972, during the Apollo 17 mission. The image of the globe, lit up by the sun against the darkness of surrounding space, has been named the ‘Blue Marble’ shot, and has become perhaps the most widely reproduced photo ever taken. Apollo 17 completed its scientific mission, yet the photograph, taken on a whim out of the window, has become one of its most significant contributions to our conception of our planet. Eugene Cernan, commander of Apollo 17 and one of the potential authors of the original Blue Marble photograph, emphasises the emotional qualities of the image, calling the Earth the most beautiful planet, ‘because it’s the one we understand and we know, it’s home, it’s people, family, love, life’.

In the decades since, dynamic, digitised satellite images have become as widespread as the classic static image of the Earth. However, the Blue Marble shot still entailed a human vantage point, a human perspective. Human eyes gazed upon the Earth and human hands directed the exposure of the camera. No peopled mission has since gone so far as Apollo 17; however, imagery of the Earth-from-above has proliferated through more machinic means. The virtual globe of digital maps such as Google Earth has given us a visual literacy with our planet from the cusp of space, a literacy built upon the constant streaming of satellite data and its processing in data centres distributed around the globe, and concentrated in the heartlands of digital capitalism.

Corporate and government interests are responsible for installing the 3000 operational satellites currently in orbit. They produce a plethora of data from their various vantage points above the Earth. Some enable us to engage in disembodied communication, connecting us to the internet or to television. Many of these satellites are Earth observers created to measure air currents to improve weather forecasts or to track cargo containers as they journey around the world. Some create imagery for disaster management, or land-use mapping. And, of course, many of these machines, created by military establishments, are used for war-making; for reconnaissance and surveillance. Discussion of satellite technologies routinely conjures fears regarding their use by states and corporations for more general population surveillance and control. Even the advent of digital mapping sites, such as Google Earth, which promise to ‘democratise’ access to satellite imagery, are stage-managed by corporate interests that have intimate links to the military-industrial complex. The Google Earth database makes a trove of Earth imagery widely available, producing a vision of the planet that is now instantly recognisable to those versed in such specular representations—pseudo-naturalistic, often colourful, shot from an elevated position, and with no apparent limit of scope. The position of the camera is hard to grasp, offering us a seemingly limitless vision of the terrain, a ‘view from nowhere’. The planet, our terrestrial home, becomes an abstracted globe, as produced by scientific technologies and their corporate funders.

Does this abstracted world retain its associations with home? Does it still have the ability to spark the kinds of wonder that the Blue Marble image provoked? Environmentalists have said that the Blue Marble image showed us a fragile beauty, and that the yearning it created called out an attitude of care. Planetary unity and care for the environment are certainly central to the ways in which Google promotes and markets the imagery it produces. But does it actually promote it? Rebecca Moore, founder of Google Earth Outreach, routinely speaks of Google Earth’s capacity to provide an understanding of our changing global environment and to help envision solutions to ecological disaster. Thus Google Outreach encourages people to create maps and stories within the virtual space of Google Earth, focusing on the potential of the mapping portal to have positive social and environmental impacts. Digital mapping portals and the high-resolution satellite imagery that they make available are undoubtedly powerful visual tools with vast potential for storytelling—but what stories arise from a satellite’s-eye-view of the world? Is it even possible to subvert the totalising effects of technologies that were created as a means for global militaristic control and extractive capitalism?

The gaze of the satellite is the key position in this storytelling, the dynamic nature of digital mapping a key departure from older static shots of the Earth from space. Mapping portals not only provide a huge database of images, they also provide the software to create layered, personalised and interactive mappings. Google stresses the capacity of its platform for storytelling regarding the environment; and Google Outreach in particular partners with not-for-profits and conservation groups to create multimedia mappings, for example, of the Samburu National Reserve and the Galapagos Islands, in the hope of engaging people in conservation efforts. The multimedia aspects of these products often picture the Earth within space before zooming in to specific locations and landscapes. Is the satellite the medium of the story, or the storyteller itself?

The storytelling capabilities of satellite imagery are explored in John Bois’ multimedia science-fiction story 17776. In Bois’ story, three space probes have gained sentience and use satellite networks to watch people back on Earth. Bois’ machines often express a tender care for both Earth and Earth’s human inhabitants, and the story evokes touching connections between people and terrain, or place. Google Earth is enmeshed in the making of this story, providing the essential imagery of the various probes’ roving gaze across their home planet. The emotional climax of the story is a slow-panning view of the flooded streets of Manhattan, prompting the probes to reflect on rising sea levels and climate change. The satellite’s gaze powerfully gestures to space, producing the sorts of emotions felt by Eugene Cernan on Apollo 17: notions of home and care for life, both human and otherwise.

Denis Cosgrove has written about the cultural and symbolic significance of the Blue Marble photograph and its ability to evoke a multitude of associations, including ‘the globe’s organic unity and matters of life, dwelling, and rootedness. It emphasises the fragility and vulnerability of a corporeal earth and responsibility for its care. It can generate an apocalyptic anxiety about the end of life on this planet or warm sentiments of association, community, and attachment’. As in Bois’ story, such imagery often provokes a reflection on the possibility of planetary destruction, with imagery of the globe becoming a significant symbol for environmental movements, where the Blue Marble shot is replicated and remediated as an icon for ecological care.

Connection, transience, tenderness and apocalypse are themes often produced by stories told from the satellite’s vantage point. Epoch, a short film created by Kevin McGloughlin, uses satellite images from Google Earth to create what he describes as ‘a visual representation of our connection to earth and its vulnerable glory’. The film combines images taken from Google’s database to represent a terrain in motion and constant change. At times the film focuses on built environments—buildings, fields, roads, planes, wind turbines. At other times craters and ridges meld into one another. These dynamic forms are visually reminiscent of Google Earth’s time-lapse feature, mappings that move through time rather than through space. These Google-produced short films show the changes to specific locations over the past thirty-five years, focusing on urban expansion, mining, deforestation and disappearing glaciers.

Google Earth’s time-lapse sequences rely on fixed spatial coordinates and consistency of scale: they are invested in a geographic imagination that constructs straightforward relationships between places and a linear message of temporal change. In Epoch instead, the satellite imagery is surreal, confusing clear associations with place and disorienting any sense of linear time. While both projects use satellite imagery to create a dynamic narrative of landscapes in change, the focus of Google’s films is brute human impact, whereas Epoch focuses on the more intangible notion of human connection. The changing forms in Epoch speak to transience and mutability. As McGloughlin writes, ‘the fragility which exists in all aspects of life is one thing that is certain. We are brittle, and so is Mother Earth’. The retreating glaciers and expanding mines featured in the Google Earth time-lapse productions establish a similar narrative of ecological change and ecosystem fragility. The two projects demonstrate the vast potential of digital mapping portals for telling stories about planetary change, but they also show the greatly different shapes such stories can take and the uses to which they can be put.

This paradox is deeply embedded within the stories we tell from the position of the satellite’s gaze. The mapped stories we tell are all deeply embedded in the paradox of the satellite’s gaze. The cultural meanings embedded in satellite technology often focus on human connection with the planet, raising feelings of tenderness and care. The formal features of Google Earth give us the illusion of flying across a terrain and knowing the whole Earth up close. However, while this vision of Earth from space may lead us to reflect on our connection to the planet, the digital nature of the virtual globe also mediates our connection with the planet in particular ways, and does so through corporate-controlled technology.

The continually streamed view from above continues to show us increasing human impact and environmental degradation and loss, telling a story of a larger contradiction—that despite Earth being our only home, we relate to it as an object and an abstraction all the better to locate it as a resource within extractive, conquering systems.

Madeline Frohlich is a writer who works near the banks of the Maribyrnong River. A current masters candidate in geography and with degrees in international studies and literature, she has an abiding interest in place on many scales, from the domestic to the planetary.