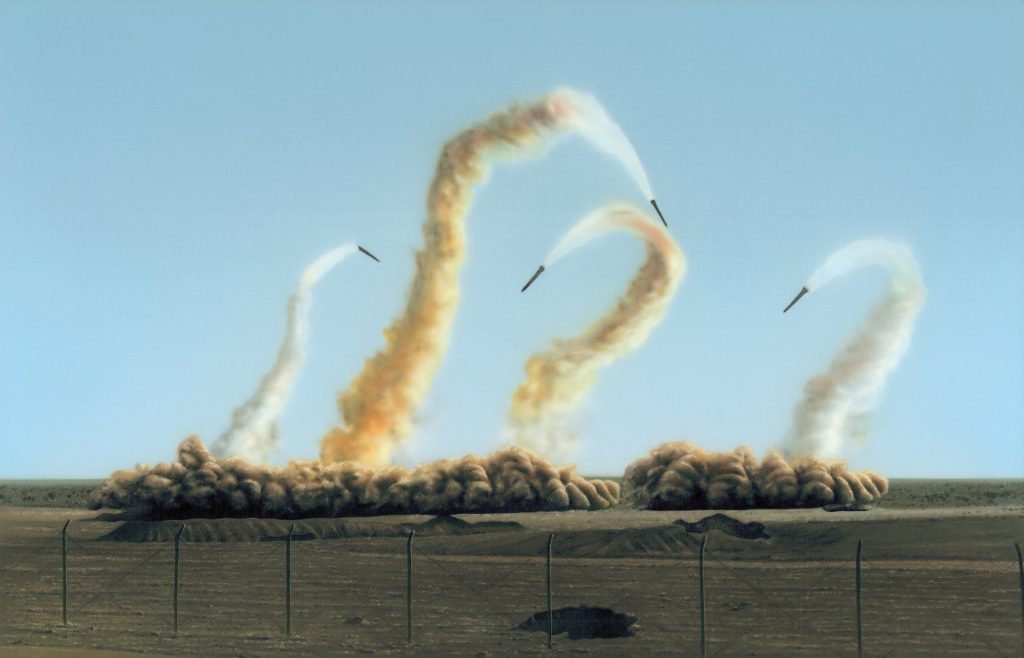 Link to Part I

Beyond financial speculation, debt-driven growth, and pillaging state finances, the transnational capitalist class (TCC) turned to another mechanism to sustain accumulation in the face of stagnation, what I have termed militarised accumulation. Savage global inequalities are politically explosive and to the extent that the system is simply unable to reverse them or to incorporate surplus humanity it turns to ever more violent forms of containment to manage immiserated populations. As popular discontent has spread in recent years, the dominant groups have imposed systems of mass social control, repression and warfare—from mass incarceration to deadly new modalities of policing and omnipresent systems of state and private surveillance—to contain the actual and the potential rebellion of the global working class and surplus humanity.

Militarised accumulation refers to how the global economy is becoming ever more dependent on the development and deployment of systems of warfare, social control and repression, apart from political considerations, simply as a means of making profit and continuing to accumulate capital in the face of stagnation. As the crisis intensifies, militarised accumulation may take over as prime driver of the global economy. The so-called wars on drugs and terrorism, the undeclared wars on immigrants, refugees and gangs (and poor, dark-skinned and working-class youth more generally), the construction of border walls, immigration detention centres, prison-industrial complexes and systems of mass surveillance, and the spread of private security-guard and mercenary companies have all become major sources of profit-making and they will become more important to the system as economic depression sets in.

The events of September 11, 2001, marked the start of an era of permanent global war in which logistics, warfare, intelligence, repression, surveillance and even military personnel are more and more the privatised domain of transnational capital. Criminalisation of surplus humanity activates state-sanctioned repression, opening up new profit-making opportunities for the TCC. The Pentagon budget increased 91 per cent in real terms between 1998 and 2011, while worldwide, total defence outlays grew by 50 per cent from 2006 to 2015, from $1.4 trillion to $2.03 trillion, some 3 per cent of gross world product, although this figure does not take into account hundreds of billions of dollars in ‘homeland security’ spending. In the decade from 2001 to 2011 military-industry profits nearly quadrupled. Led by the United States as the predominant world power, military expansion in different countries has taken place through parallel, and often conflictive, processes, yet all show the same relationship between state militarisation and global capital accumulation.

But militarised accumulation involves vastly more than activities generated by state military budgets. There are immense sums involved in state spending and private corporate accumulation through militarisation and other forms of generating profit through repressive social control that do not involve militarisation per se. The various wars, conflicts, and campaigns of social control and repression around the world involve the fusion of private accumulation with state militarisation. In this relationship, the state facilitates the expansion of opportunities for private capital to accumulate through militarisation, such as by facilitating global weapons sales by military-industrial-security firms, the amounts of which have reached unprecedented levels. Global weapons sales by the top 100 weapons manufacturers and military service companies increased by 38 per cent between 2002 and 2016.

Private military and security firms have proliferated worldwide and their deployment is not limited to the major conflict zones in the Middle East, South Asia and Africa. In his study Corporate Warriors, P. W. Singer documents how private military forces (PMFs) have come to play an ever more central role in military conflicts and wars. Beyond the many based in the United States, PMFs come from numerous countries around the world, including Russia, South Africa, Colombia, Mexico, India, the EU countries and Israel. PMF clients include states, corporations, landowners, non-governmental organisations, and even the Colombian and Mexican drug cartels. By 2018, private military companies employed some 15 million people around the world, deploying forces to guard corporate property, provide personal security for TCC executives and their families, collect data, conduct police, paramilitary, counterinsurgency and surveillance operations, carry out mass crowd control and repression of protesters, manage prisons, run private detention and interrogation facilities, and participate in outright warfare. In addition, there were an outstanding 20 million private security workers worldwide in 2017, and the industry was expected to be worth over $220 billion by 2020. In half of the world’s countries, private security agents outnumber police officers.

Meanwhile, criminalisation of the poor, the racially oppressed, immigrants, refugees and other vulnerable communities activates ‘legitimate’ state repression to enforce the accumulation of capital, whereby the state turns to private capital to carry out the repression of those criminalised. There has been a rapid increase in imprisonment in countries around the world, led by the United States, which has been exporting its own system of mass incarceration. The global prison population grew by 24 per cent from 2000 to 2018. This carceral state opens up enormous opportunities at multiple levels for militarised accumulation. Worldwide there were in the early twenty-first century some 200 privately operated prisons on all continents and many more ‘public–private partnerships’ that involved privatised prison services and other forms of for-profit custodial services such as privatised electronic-monitoring programs. The countries that were developing private prisons ranged from most member states of the EU to Israel, Russia, Thailand, Hong Kong, South Africa, New Zealand, Ecuador, Australia, Costa Rica, Chile, Peru, Brazil and Canada.

Every phase in the war on migrants and refugees has become a wellspring of profit-making, from private, for-profit detention centres and the provision of services inside public detention centres such as healthcare, food and phone systems to other ancillary activities of the deportation regime, such as government contracting of private charter flights to ferry deportees back home and the equipping of armies of border agents. In the United States, the border-security industry was set to double in value, from $305 billion in 2011 to some $740 billion in 2023. In Europe, the budget for the EU public–private border-security agency, Frontex, increased a whopping 3688 per cent between 2005 and 2016, while the European border-security market was expected to nearly double, from some $18 billion in 2015 to approximately $34 billion in 2022.

When the health emergency comes to an end we may be left with a global economy even more dependent on this militarised accumulation than before the virus hit, and with the threat that the ruling groups will turn to war. Historically, wars have pulled the capitalist system out of crisis and have also served to deflect attention from political tensions and problems of legitimacy.

Prof. Robinson is on the right side of justice. He has exposed global capitalism and continues to expose militarism. He even does not fall into the trap of attributing every ill to structural violence, as he also attributes decisions to human beings, to agency. Measures are imposed by real people, agents of global capitalism.

Unfortunately, Prof. Robinson, so preoccupied with developing and arguing theoretical models of global capitalism, misses some of the most glaring facts occurring in plain sight in his own country.

The first fact is the mass-murder carried under the orders of the US government on 9/11. This mass-murder was prepared for a long time, as well as the subsequent campaign entitled “global war on terror”. This mass murder and the subsequent creation of the new terrorist “enemy” were necessary for global capitalism and explains why no government demanded evidence from the U.S. government regarding the participation of Muslims or the involvement of Osama bin Laden. It also explains why the UN Security Council, representing all capitalist governments, designated within 24 hours the 9/11 attacks as “international” terrorism, without demanding any evidence from the U.S. government and gave the U.S. a green light to attack any country of its choosing (see preamble of UNSC resolution 1368). The second fact is the imposition of a state-of-exception around the world on the pretext of protecting populations from virus Covid-19.

These blind spots, common to Prof. Robinson and to Prof. Chomsky, represent a serious historical dereliction by Marxist scholars so engrossed in theory that they incapable to assess simple facts, such as the complete absence of evidence in support of the US official legend on 9/11 and the psychological warfare taking place these days in the garb of a virus threat.

As an author of several books dealing with covert state terrorism, I urge Prof. Robinson to wake up!