Fracking on Trial in the Northern Territory 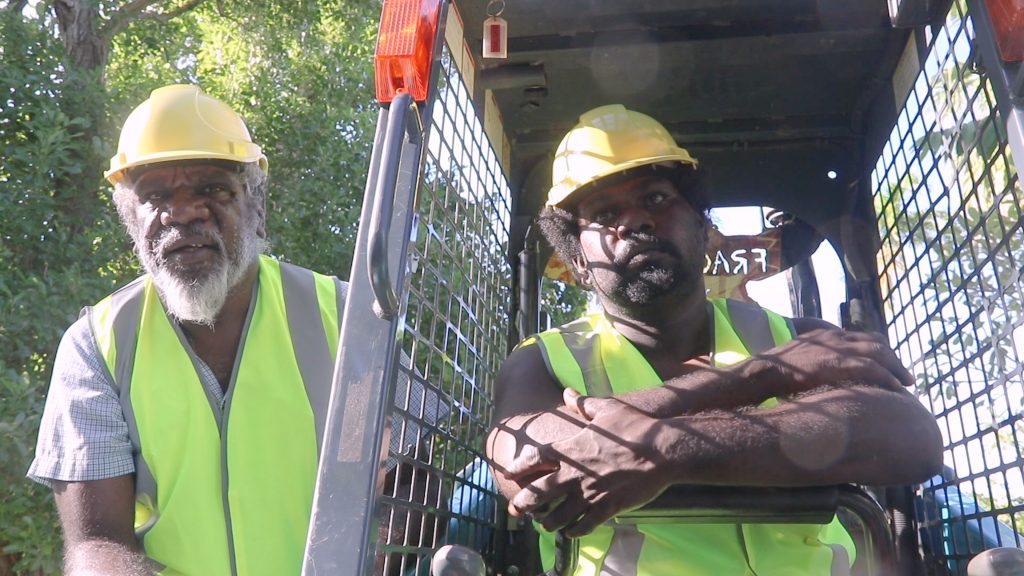 On 19 October 2020 an unusual case was brought before the Darwin Local Court in which two defendants were jointly charged as follows:

On the 16th April 2019 at Darwin in the Northern Territory of Australia did at Parliament House, intentionally or recklessly cause damage to property, namely front lawn, belonging to another, namely NT Government. Contrary to Section 241(1) of the Criminal Code Act (NT).

The ‘damage’ in question consisted of three shallow holes, drilled using a bobcat that was driven by a young Aboriginal custodian, co-defendant Conrad Rory, during a protest over the NT government’s recent decision to lift a moratorium on shale-gas fracking across the region.

The action was a symbolic protest, designed to replicate the invasive fracking that was now taking place on remote homelands and pastoral stations across the Northern Territory, and bring it to the doorstep of the decision-makers who had so far sat behind closed doors, far from the destruction fracking companies have wrought.

There are key differences between our action to defend country and that of the profit-driven fracking companies: parliament’s grass will grow back, but the damage fracking will herald for communities, country and our climate will last for generations.

Following nearly a decade of extensive peer-reviewed scientific study of the impacts of fracking, and having conducted two  public inquiries, the NT government can no longer plead ignorance to the risks the industry presents. The Pepper inquiry, reporting in 2018, was unequivocal in its findings on the scale of the pollution the industry would create.

Despite all this evidence, in April 2018 Michael Gunner’s Labor government gave the green light to gas fields over 51 per cent of the Northern Territory’s landmass.

In 2019 explosive Freedom of Information revelations showed that the Territory’s Gunner government had itself warned federal energy minister Angus Taylor that if gas fields are developed in the Beetaloo or McArthur Basins, the scale of the emissions would be enough to jeopardise the Paris Climate Accord and destroy any chance of securing a safe global climate.

As carbon dioxide in our atmosphere pushes 410 parts per million, fuelling a dangerous climate emergency, the world simply cannot afford to let the Northern Territory become the fossil-fuel industry’s next fracking frontier. But while our elected leadership at local and national level continue to play with carbon offsets and clever Kyoto accounting while the continent burns, it is increasingly apparent that it will be the actions of everyday people that will have to be the catalyst for real change.

We chose to fight these charges in the court because we believed our actions were not only justified but necessary in the context of the extraordinary climate emergency facing the Northern Territory, and all life systems on the planet.

Here in the Territory we are highly vulnerable to the effects of climate change. Our trial concluded in a week that marked the hottest start to November since records began, the heat and humidity exaggerating the effects of the last two wet seasons that weren’t.

In Conrad Rory’s hometown of Borroloola in the Territory’s remote Gulf region, the temperature gauge has been a nonstop 40 degrees plus for weeks now. Just a short drive down the highway, Empire Energy’s fracking rig is drilling for new sources of oil and gas that, if allowed to develop into full-scale gas fields, will supercharge global heating and make living conditions in the region almost unbearable.

In the remote township families from the region’s Mara, Gurdanji, Yanyuwa and Garrwa people are crammed into overcrowded housing, struggling to pay for power cards to run basic appliances such as fans, fridges and air-conditioners. Gas fracked from rock under residents’ feet will do nothing to alleviate the energy poverty communities like Borroloola experience, but the pollution released risks leaving these remote and vulnerable regions uninhabitable as climate change drives increasing temperatures and reduced rainfall in years to come.

The region is being eyed off by the federal government as a key target in its ‘gas-fired’ economic-recovery plans. Alongside the NT government, Prime Minister Morrison is promising billions of public dollars in bailout money for an ailing gas industry, despite a lack of evidence that fracking in remote areas of the Territory will create any meaningful employment or bring energy prices back under control.

When a group of Traditional Owners and Territory residents drove a bobcat to parliament’s lawns in the early hours of April 2019 we were determined to show the NT government what it feels like to have invasive drilling threatening your land and to bring the risks of fracking out of the remote bush.

Borroloola Elder Nancy McDinny, dressed in mining hi-vis and hard hat, directed the proceedings with her walking cane and advised the group of protestors that the source of the gas they were drilling for appeared to be located underneath parliament house.

The area was cordoned off with caution tape, and the bobcat proceeded to drill three shallow holes in the freshly mown lawns of Parliament House. Protestors in hi-vis erected wooden fracking rigs atop the ‘wells’, while Traditional Owners from the Beetaloo and McArthur Basins made statements explaining how it feels to see homelands destroyed by drill rigs. McDinny explained how her community of Borroloola felt hearing about mining decisions being made without community input:

The Government and the companies think they can get away with drilling on our land just because we live out there, not here in the city. But this is our life we are fighting for, our country, our future. That’s why we’ve brought fracking to their doorstep.

Ray Dimakarri Dixon, a Mudburra elder and artist from Marlinja outstation, situated in the heart of the Beetaloo basin region, turned to the camera to explain why he, his grandchildren and his 85-year-old mother-in-law had travelled over 700 kilometres to take part in the action:

We want to get the message through to the government that we don’t want them to frack our land and poison our water. Our young children here, they deserve to live in a clean and healthy environment too. No matter your colour or where you come from, water is life. Stand with us and help us to ban fracking.

The case took a year to get to trial as the COVID-19 pandemic upended communities and economies—while fracking companies continued to expand plans for exploration across the Territory.

Over a two-day trial in Darwin Local Court our case relied on several defences, including extraordinary emergency, and defence of property, namely land, water and the climate.

In a democracy the law accommodates actions such as these, not only in defence of people but in defence of land and water. These are actions taken by people of principle who are genuinely concerned about the destructive effects that fracking poses to land, water and future generations of Australians. The outcome of this case has important ramifications for the future protection of land, water and our climate.

It was never going to be an easy case. To succeed on emergency and defence of property a defendant needs to establish by evidence that their actions were done because they reasonably believed that there existed an extraordinary emergency (in this case a climate emergency) and that what they did was necessary and the only reasonable way to deal with the emergency.

During evidence, we argued that landholders and custodians were being left with few options to protect their land and water from harm. For years the NT government has ignored Territory landholders and communities, and a growing mountain of evidence of the harms of fracking. It has refused to listen to voters or  to implement the recommendations of its own fracking inquiry. Instead, it has set about trying to silence those protesting against the destruction the industry brings with it.

Despite attempts at intimidation, the movement for a frack-free NT remained defiant throughout the trial, warning the government that, if fracking is to be legal, then laws will have to be broken until the dangerous practice is subject to a full ban across the Territory.

The defence called expert witnesses, including renowned climatologist Emeritus Professor Will Steffen, who made a powerful case that the failure to achieve net zero emissions in accordance with the 2016 Paris Agreement ‘will present our children and grandchildren with a planet in which many regions could well become uninhabitable. This is the climate emergency and it is here now’.

In his judgment, handed down on 10 November 2020 in front of a courtroom packed with anxious supporters, including representatives from communities set to be impacted by gas fields, Judge John Neill acknowledged the compelling nature of the climate emergency and agreed that both defendants were acting on a reasonable belief in the need to protect property from harm.

Ultimately, though, it was not this extraordinary emergency and fracking’s threat to land, water and people that decided this case. Instead, it was the fact that the prosecution failed to present any evidence as to the ownership of the lawn in question, or whether the impact on the lawn constituted ‘damage’ under the law, that resulted in the ‘not guilty’ verdict.

The resulting judgment was a spectacular own goal by the prosecution. It only served to underscore how mistaken  the NT government was to pursue these charges, as it struggles at every turn to implement its energy agenda and turn Aboriginal homelands into fracking gas fields.

But the judgment also offered hope in the fight for a safe climate future.

Judge Neill accepted the expert evidence that we are facing an extraordinary emergency caused by a warming climate, and that this entitles a person to act in self-defence to protect land, water and livelihoods from the causes of global heating, including dangerous and polluting fracking.

As fracking rigs start to roll across the Barkly and Gulf regions of the Northern Territory, and Australians brace for another long, hot, dry and unpredictable fire season, the judgment is an important recognition of our right to defend ourselves against the threat of climate change and the extraordinary emergency it presents to our lands, our livelihoods and the future of our only home.

At the conclusion of the trial, Rory asked the judge to consider this question:

How is it that protecting water from fracking makes me a criminal, yet fracking companies contaminating water is considered legal by this government?

If the NT Government is too gutless to stand up for the rights of our communities and our climate, then they better be prepared for more actions like ours because we will not stop standing up for our future until fracking is banned across the NT.

This commitment to law and order in a society that has deep roots in discriminatory justice practices—overtly legitimated under the NT Intervention in 2007—signals another four years of the state’s punitive management of Aboriginal children.

Lauren Mellor has been a regional and remote community organiser for Protect Country Alliance, a Territory-wide network of communities, civil-society groups and landholders advocating for the protection of water, country and climate from the risks of fracking gas fields. She has worked for over a decade with Territory communities impacted by resource extraction to achieve industry and government reform through improvements to policy, law and practice. She is currently working on the development of Indigenous community-owned solar projects, and is a regular contributor to policy journals and public discourse on resource extraction, human rights and climate justice.